ASU center to teach community about thriving in a desert

There’s nothing new about Arizona residents looking for sustainable ways to live in the desert, but a recent United Nations report has made the matter a worldwide concern.

Because of climate change, the UN says that by 2030 almost half of the global population will be living in “areas of high water stress,” and that without intervention as many as 700 million people could find themselves displaced. 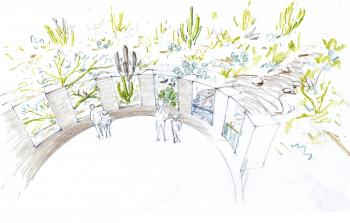 Enter ASU and its partnership with Scottsdale’s future Desert Discovery Center, aimed at creating an expansive research center to teach “a global audience to value, thrive in and conserve desert environments.”

“When people think of research they think of a classroom,” said Sam Campana, executive director of the center and former mayor of Scottsdale. “It is our goal to not have a classroom, but a living laboratory where people are out and doing work that is not only important to those who live here but anyone in an arid environment.”

Aside from research, the center will have a public face, and ASU has been working with design firm Thinc to create a series of exhibits to address “what I can see, what I can’t see and what does all of it mean?” Campana said. In total, it will create an experience that shows how we can be more in tune with our environment.

Thinc, according to its website, has become known for a “holistic approach” that “combines great design and execution with broad insight into the organizational, cultural and physical contexts surrounding a project.” The firm has worked with museums, science centers, zoos and aquariums.

The center’s research will come as the global population grows “mainly in regions that are already experiencing water stress and in areas with limited access to safe drinking water,” according to the UN in a 2014 study.

Research collaborations could include water quality, use and supply, as well as climate-change adaptation and urbanization.

Other areas of focus will include soil-crust research, desert species, the intersection of open-space preserves and people.

“There are things going on in the desert that are in the deep in the crust, and they’re teeming with life,” said Duke Reiter, executive director of University City Exchange. “But without this research and a sophisticated guide, at both at a macro and micro scale, it would be impossible to see. Only the university could bring this component.”

Campana said 10 laboratories are expected to be associated with the center. Researchers, brought in by ASU, will study desert-life sustainability, “an important step in preserving and understanding this land,” said Duke Reiter, whose exchange tracks university’s academic and research assets to apply them “for the greater good.”

Desert Discovery Center leaders are clearing hurdles as they await approval from the city of Scottsdale.

“If you look at ASU’s design’s aspirations, this university takes its commitment to their community, applied research and sustainability very seriously,” Reiter said, “which is what makes this is a great venue and leaves no reason for us to not be involved in this.”

Statistically speaking, there’s a lot of room for improvement in the representation of American Indians in higher education: Such students make up less than 1 percent of all college students in the U.S., and only about 13 percent of all Natives have a college degree.So ASU has made it a priority to improve those odds.“Hearing those numbers only makes me more committed to my education,” said ... 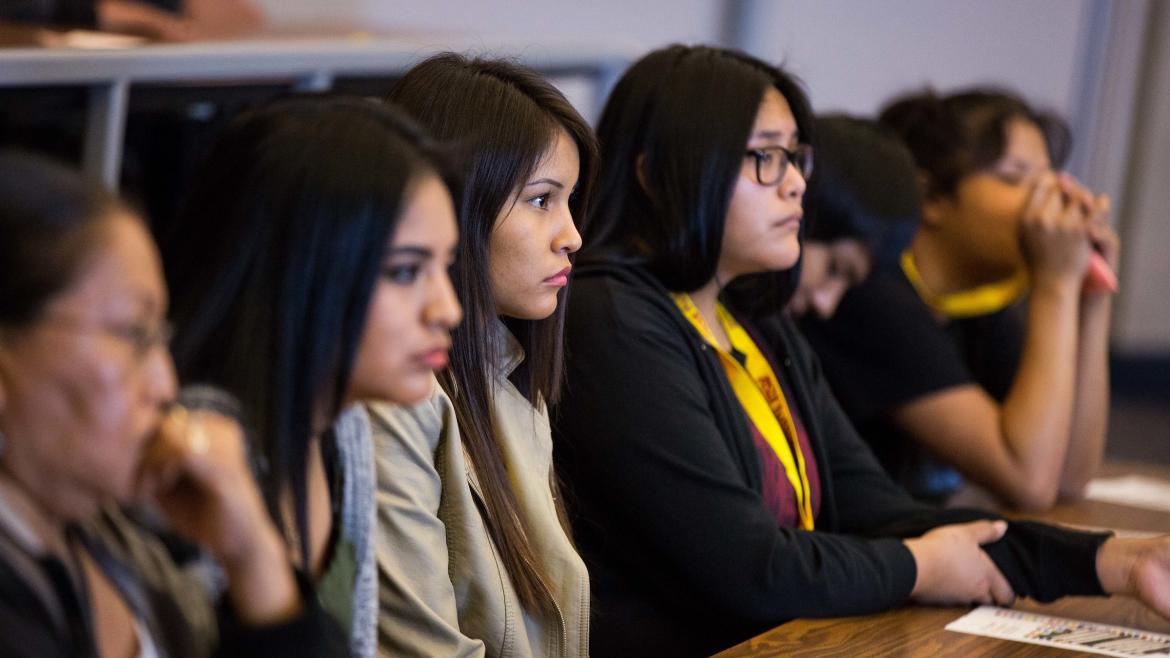 Statistically speaking, there’s a lot of room for improvement in the representation of American Indians in higher education: Such students make up less than 1 percent of all college students in the U.S., and only about 13 percent of all Natives have a college degree.

So ASU has made it a priority to improve those odds.

“Hearing those numbers only makes me more committed to my education,” said Holbrook High School junior Courtney Lee, a member of the Navajo Nation.

Lee traveled four hours by bus Wednesday with dozens of other students to attend the fifth annual RECHARGE conference at ASU’s West campus. The event drew nearly 500 Native students into a conversation about college readiness with topics ranging from financial aid and scholarships to wellness and careers.

Efforts to raise college enrollment among underrepresented groups are central to ASU’s goal of increasing the number of college graduates in Arizona. 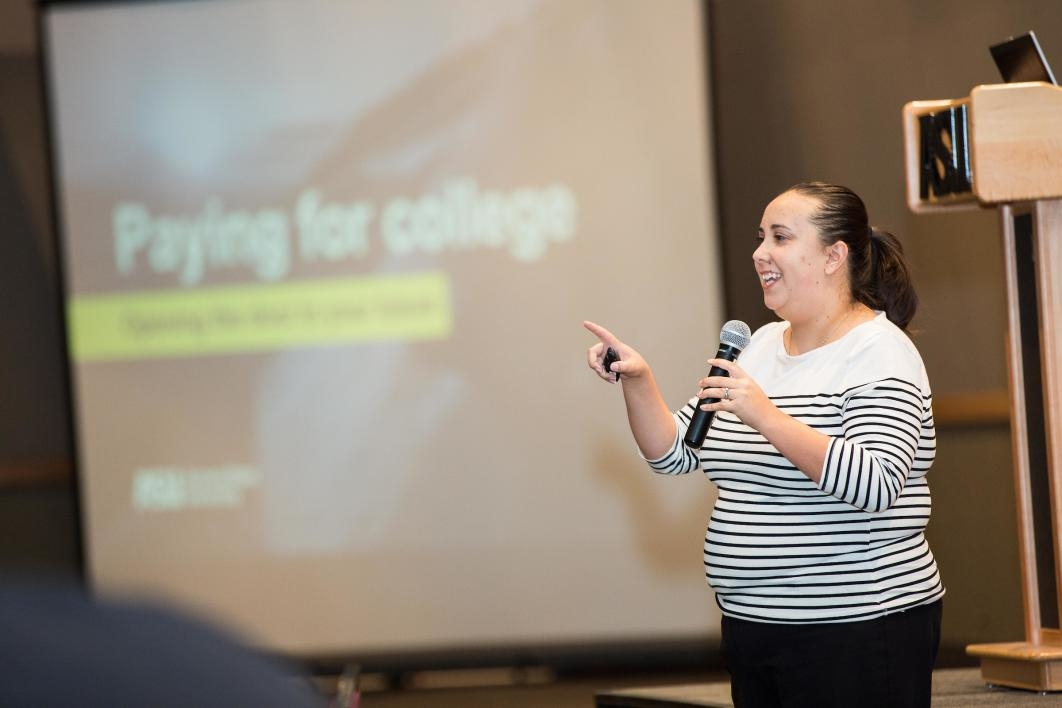 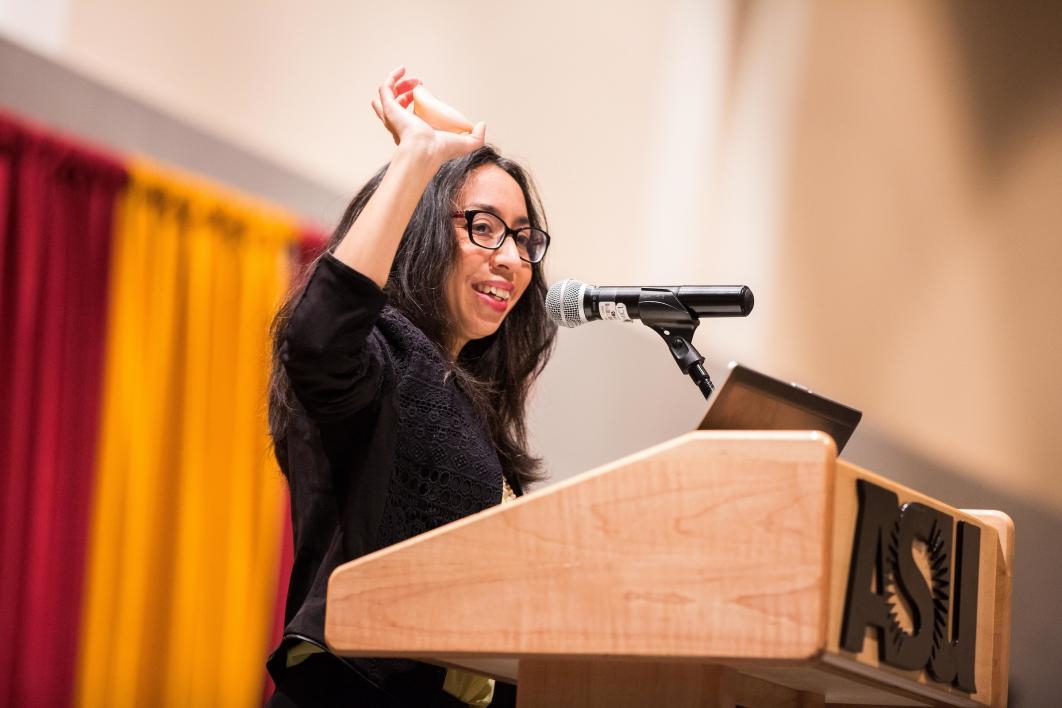 Keynote speaker Marisa Duarte, a professor in the School of Social Transformation and member of the Pascua Yaqui Tribe, addresses students during the RECHARGE conference. Other guest speakers at the daylong conference included former Congressman Matt Salmon, who became ASU’s vice president for government affairs in June. 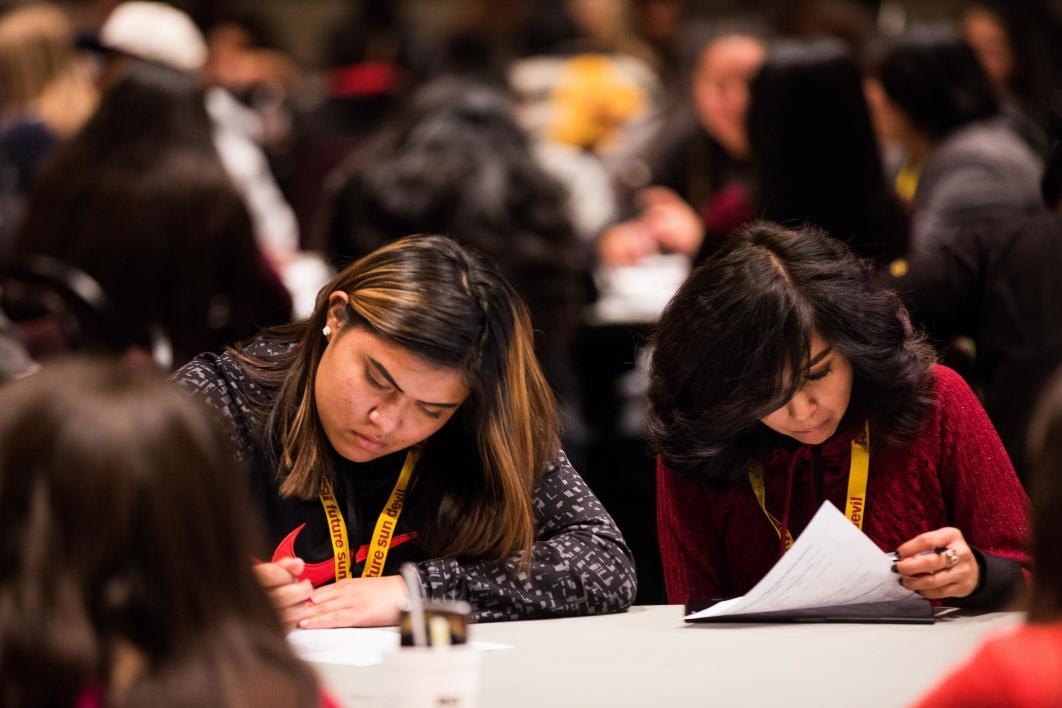 Through events such as RECHARGE, ASU works to raise college enrollment numbers for Native students.

ASU has sought to increase the number of American Indians on campus through specialized programs, including the SPIRIT orientation program, which helps Native students adjust to college life over a two-week period; INSPIRE, a one-week youth camp at ASU’s Polytechnic campus; and RECHARGE, which started in 2012 with 90 students.

Through these efforts, ASU has a growing Indian student body. Approximately 2,600 Native students attend ASU, which saw its largest graduating class of 362 in May.

The daylong conference, hosted by the Office of American Indian Initiatives and ASU Access, featured guest speakers, including former Congressman Matt Salmon, who became ASU’s vice president for government affairs in June, and Marisa Duarte, a professor in the School of Social Transformation and member of the Pascua Yaqui Tribe. It drew middle and high school students from around the state.

“Students need to see themselves on campus, but they also need to see other Native Americans in leadership, faculty and staff roles,” said Victor Begay, academic community liaison director. “When they see others in those roles, it helps them achieve academic comfort.”

One of those role models at the conference was Kate Rosier, executive director of the Indian Legal Program at the Sandra Day O’Connor College of Law at Arizona State University and a member of the Comanche Tribe. She made a plea for students to consider a career in law.

Rosier said there are 1.3 million attorneys in the U.S., but only about 2,600 are Native American.

“We’re the least represented group and yet most affected by the law because we fall under tribal, state and federal laws,” Rosier said. “Without proper representation, we have less of a voice than we should.”