Alissa Ruth, an associate academic professional at Arizona State University, knows firsthand that making your way through the many layers of higher education can be a bewildering process, especially if you’re a first-generation college student like she was.

“When I was an undergraduate, I had no idea what a master’s was, and I didn’t know if I needed one,” she said. “Even going into my PhD after that, it was really hard navigating the system.” 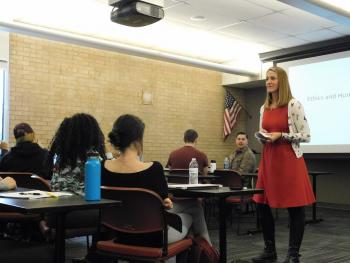 Besides these common difficulties, potential graduate students from some demographics also report additional obstacles, such as a lack of representation and role models in higher education fields.

“We’ve seen over the last year or two this call for more diverse faculty to be represented in universities across the country. But when you look at the stats in most PhD programs, it’s just not representative of the U.S. population,” Ruth said. According to the U.S. Department of Education, African American and Hispanic students earn about 13 percent of all doctoral degrees, even though, by the U.S. census, they make up almost 30 percent of the population.

To help address this issue, she pioneered the “Access, Equity and Inclusion in Higher Education” project last spring, which strives to understand how to increase underrepresented students’ participation in grad school, particularly within the social sciences.

As the director of strategic initiatives for teaching and learning at the School of Human Evolution and Social Change, she is in a unique position to influence and work with students directly by teaching a practicum course for undergraduate students by the same name as her project. There, students get practical experience doing research by helping Ruth collect data.

In part one of the course last spring, 21 students chose a central research question related to the project, and then, after learning practical skills like research ethics, how to work with human subjects and data-collection methods, gathered the relevant data by interviewing ASU grad students.

The result was a whopping 100 surveys’ worth of insights into the graduate school experience, as well as information about where grad students received the most support or discouragement for pursuing graduate school.

Ruth is currently coding and analyzing this data, with a focus on comparing first-generation and non-first-generation graduate students. Part two of the course takes place this spring with 20 students who will participate in more in-depth qualitative research.

Students in Ruth’s course also provide data as research participants themselves; they are tested at the beginning and end of the semester to see how much they learn about graduate school, and they write a final reflection piece to help identify what their future career goals are.

For some, that may be graduate school, while for others it may be a career. The chief takeaway is that they understand what graduate school is and the cost-benefit options it may present them if they chose to go that route.

Ruth plans to follow up with students on how they’re meeting those stated goals in the next two to three years, but some are citing benefits from this participation already, including Ruth’s former student and ASU alumnus, Paola Parra.

Not only did the project open Parra’s eyes to her ability to get into graduate school, it gave her the research training she needed for her current position as a clinical research coordinator in Guadalajara, Mexico.

“The most valuable part for me was the training, such as how to properly go through an informed consent document, how to conduct a professional survey and how to code data,” she said. “While on my second phone interview with my now-employer, they asked me if I had any experience with research. I told them about the work I had been doing in this class, and I'm pretty sure that is the reason they hired me on the spot.”

Additional results from Ruth’s study are still forthcoming, but she has noticed at least one initial trend in what shapes students’ decisions to go to grad school.

“A lot of times it’s a professor or a friend completing a program who said something to encourage the possibility of graduate studies. Oftentimes, it is the faculty who students see on a regular basis and trust. Somebody planted the seed,” she said.

This is certainly true of Ruth’s own experience. As a college freshman, her Spanish professor told her about how studying abroad had been such a formative time for her, which inspired Ruth to study abroad herself. This led her to teach English in Mexico for two years, where others in graduate school encouraged her to continue her studies, leading to her eventual master’s and doctoral degrees.

Ruth’s current position brings her almost full circle, as she now works with her school’s study abroad programs and encourages her peers to share more stories from their own educational journeys with students to help widen the funnel of opportunities for all.

“Had my professor not talked about these options, who knows where I would be?” she said.

Following a murder-suicide last year involving two suburban Phoenix high school students, it became apparent that there had been warning signs on social media that went unnoticed.Hoping to make something positive of the tragedy, organizers of the inaugural #CareEnough to Get in the Way Conference, set to take place from 9 a.m. to 3 p.m. Thursday on ASU’s West campus, are calling on Valley youth ... West campus
#CareEnough at ASU West expected to be largest youth conference ever in Arizona.
Social media has potential to do both harm and good, says ASU expert.
January 24, 2017

Valley youth will be asked for their ideas and solutions; here, two ASU faculty share their insights into social media and suicide risk

Hoping to make something positive of the tragedy, organizers of the inaugural #CareEnough to Get in the Way Conference, set to take place from 9 a.m. to 3 p.m. Thursday on ASU’s West campus, are calling on Valley youth to share ideas and solutions for creating safer environments by addressing issues such as bullying, cyberbullying and depression.

“We believe this student-driven program model has the potential to make a real difference, and can eventually be implemented state-wide,” organizers said in a statement.

The event, expected to be the largest youth conference ever held in Arizona, is being sponsored by ASU West.

Question: Have rates of depression among adolescents gone up in recent years? What about rates of suicide?

Vargas: The estimated prevalence of depression for adults aged 18 to 25 is 9.3 percent.

A worldwide study shows that the risk of first onset of suicide ideation increases sharply during adolescence and young adulthood; the 18-to-25 age group has the highest percentage of suicidal thoughts (7.5 percent) compared to the 26-and-older group.

Q: Do you know of any role that social media and the internet might play in rates of depression and suicide among adolescents?

Hall: Given that victims of cyberbullying may feel as though they’re unable to escape the bullying, that the “damage” is already done after a photo or video has been shared, or that they have no control over who witnesses the bullying and for how long the harmful information is available online, there is certainly the potential for heightened levels of depression and suicidality among victims of cyberbullying, in particular.

Interestingly, social media and the internet also have the potential to provide victims of cyberbullying (and traditional forms of bullying) with social support and access to critical resources for coping with depression and suicidal thoughts.

With increased awareness of cyberbullying, I am hopeful that the power of social media can be used to help combat the psychological consequences of all forms of bullying.

Q: What’s the difference between regular bullying and cyberbullying? Is one worse than the other?

Hall: There are a number of ways in which cyberbullying differs from more traditional, face-to-face forms of bullying.

For a victim, cyberbullying can be much more pervasive and seemingly permanent. Children and adolescents spend increasing amounts of time online and interacting through social media.

Whereas traditional bullying is typically limited to situations in which a bully can interact with a victim face-to-face — during the school day and on school grounds, for example — cyberbullying can take place at any time of day, and when the bully and victim are at home.

In other words, with cyberbullying there is no safe time or space.

Because an embarrassing photo or movie or degrading social media post can be shared instantly with a limitless number of peers, the victim has no control over who might witness the bullying or for how long embarrassing information may be accessible online.

Another difference between traditional bullying and cyberbullying is with respect to the perpetrators.

The perceived anonymity of online interactions can lead people to behave in ways that they would never behave in an actual face-to-face interaction. A basic example of this can be found in the “comments” section of just about any news article or blog post.

The degree of negativity is overwhelming, in large part, because people don’t feel personally accountable for their actions when online.

Online anonymity sets the stage for a broader range of children and teens to bully others and, as a result, there are interesting research findings to suggest that victims of cyberbullying are also somewhat more likely to report having cyberbullied others.

Q: Is it common for adolescents who are depressed or contemplating suicide to display warning signs?

Vargas: Having a psychiatric diagnosis (i.e., ADHD, anxiety, substance use, depression, etc.) is the most common risk factor for suicide, particularly severe depression.

Fortunately, even in those cases, the probability of actual suicide is relatively low but remained about the same (higher among 45- to 64-year-olds), with some geographical variations (worst in the Western U.S.).

Q: What are some red flags of suicidal tendencies that friends, family and school administrators can look out for?

Vargas: Researchers talk about suicidal behaviors or suicidality, which include having suicidal thoughts, making a plan, conducting an attempt and finally completing it. It is not perfectly linear, but tends to escalate.

There are three times more suicide attempts by females than males.

Suicide deaths for males are 3.4 times higher than for females, probably because of the methods used.

There is no single cause to suicide. It most often occurs when stressors exceed current coping abilities of someone suffering from a mental health condition.

Something to look out for when concerned that a person may be suicidal is a change in behavior or the presence of entirely new behaviors. This is of sharpest concern if the new or changed behavior is related to a painful event, loss or change.

Most people who take their lives exhibit one or more warning signs, either through what they say or what they do.

Q: What should someone do if they think they’ve witnessed a warning sign?

Vargas: Trust your instinct; if you feel your friend sounds weird, stay with them, talk with them and check on them. Take it seriously and get them professional help if needed, such as that which is available through ASU Counseling Services or their 24-hour crisis hotline: 480-921-1006. You can also check out these pages on the American Foundation for Suicide Prevention’s website: Risk Factors and Warning Signs and Talk Saves Lives: An Introduction to Suicide Prevention.