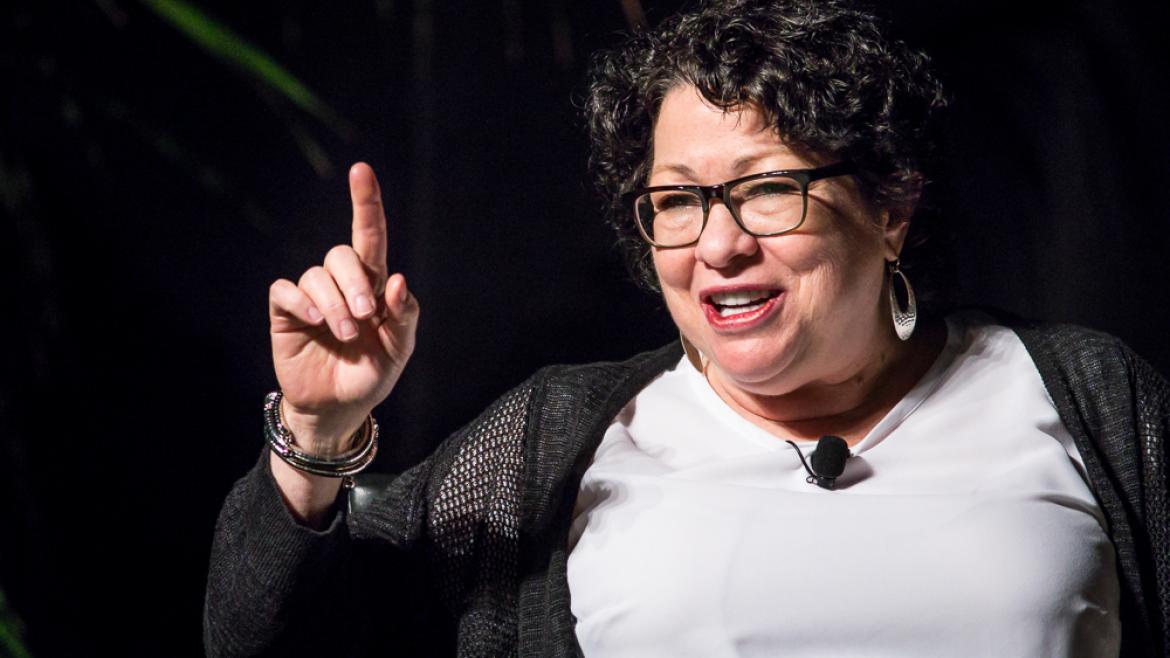 Supreme Court Justice Sonia Sotomayor said the confirmation process for high-court nominees is essentially useless because the public wants to know how a candidate would rule — something she told a crowd at Arizona State University that no good judge would predict.

“What you want is for us to tell you how as a judicial nominee we’re going to rule on the important issues you find vexing,” she told the audience at ASU Gammage on Monday night.

“Any self-respecting judge who comes in with an agenda that would permit that judge to tell you how they will vote is the kind of person you don’t want as a judge,” she said.

Sotomayor said that instead, lawmakers should consider a candidate’s character.

“Do they treat others with respect and dignity? Find out whether they have ruled in ways in which they expressed a difference with their personal feelings, because a judge who can’t point to a decision that’s different from how they personally feel is not a judge who’s following the rule of law,” she said.

The country will likely face a confirmation hearing this year, as there has been a vacancy on the nine-member court since February, when Antonin Scalia died. The opportunity to fill the open spot — and potentially influence decisions on landmark issues such as abortion — was a focus of the bitter presidential campaign.

Sotomayor has been on the Supreme Court since 2009. The first Hispanic justice, she was nominated by President Barack Obama and is considered a member of the liberal bloc of the court when the justices divide along ideological lines. In June 2012, Sotomayor was part of the 5–3 majority in Arizona v. United States that struck down several aspects of the SB 1070 anti-illegal immigration law.

She acknowledged the divisiveness in the country now and believes that civic engagement is the solution. She praised the civic-education initiative founded by former Supreme Court Justice Sandra Day O’Connor, iCivics.

“I am an American — with a Latina heart. I bleed red, white and blue. Despite the amount of love we have for America, many people don’t have a full understanding of what makes America great: We are the envy of the world because of our system of government,” she said.

“Unless we get close to 100 percent of our country voting, we’re really not going to be a democracy.” 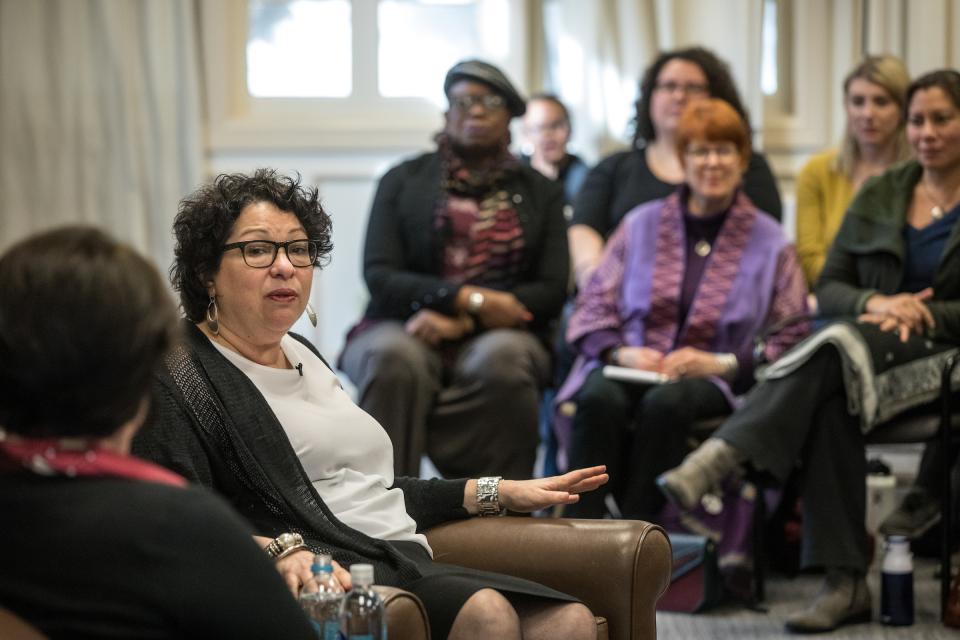 U.S. Supreme Court Justice Sonia Sotomayor meets with a group of students and faculty Monday, before delivering the 18th John P. Frank Memorial Lecture. She talked to the group about the court cases that had the most impact on her, Brown v. Board of Education and Marbury v. Madison. Photo by Charlie Leight/ASU Now

She said that diversity on the Supreme Court would be positive, but not just racial or ethnic diversity.

“We have no criminal defense attorney on the court,” she said. “We have only one civil rights lawyer — Ruth Bader Ginsburg.”

“Most of the practice of law in this country is done by solo lawyers or small firms,” she said, but only two justices have experience with that type of law, and none is experienced in environmental or education law.

“That’s the diversity that concerns me the most.”

Sotomayor acknowledged that the court has taken on fewer cases than in previous years — 76 last term compared with 130 in 1990.

“We’re not avoiding taking cases,” she said. But the justices are more interested in quality over quantity.

“If you examine the quality of those opinions in some earlier years, you will see that there is a lot lacking. For the law professors here, pick a couple of those opinions, and you will be struck by the lack of depth in the analysis and the conclusions that were reached.”

Halfway through her talk, Sotomayor walked off the stage and started walking among the rows of people, hugging children, posing for photos and shaking dozens of hands — all the while continuing to answer questions.

She acknowledged that the negative comments she faced during her own confirmation hearing were hurtful.

“Vice President Joe Biden heard that I was little sad, and he came down and gave me a hug,” she said. He told her that the number of times a person is knocked down is not the measure of his or her character; rather, it’s the number of times the person gets back up.

“I realized when he said that, that it was the story of my life,” she said.

Sotomayor wrote a best-selling memoir in 2013 called “My Beloved World,” in which she described her difficult childhood, growing up in a public housing project in the Bronx (which later was renamed for her). She got accepted to Princeton and was devastated at getting a C on her first paper. The professor told her she wasn’t writing in a grammatically correct style.

So that summer, she bought grammar and vocabulary books, learning five new words a day. She also sought out a writing mentor.

“I think we all believe that our flaws are things we can’t help,” she said. “But there’s nothing you become good at without working at it, and that’s especially true for people who come from backgrounds like my own, where poverty keeps you from being exposed to the bigger world.

“But you’re not stuck. You have an opportunity to grow. Along the way, I always asked for help. I’m never ashamed to ask.”

John P. Frank, who died in 2002, was an Arizona civil rights lawyer and constitutional scholar who helped shape the argument in the landmark Brown v. Board of Education case and was part of the team that represented Ernesto Miranda before the U.S. Supreme Court in 1966. The lecture is the annual signature event of the Justice and Social Inquiry faculty in the School of Social Transformation, which is part of the College of Liberal Arts and Sciences at ASU. The event is supported by the John P. Frank Memorial Lecture Endowment, thanks to donations by Lewis Roca Rothgerber Christie LLP as well as Frank’s family, colleagues and friends.

'Nothing' and the universe

Arizona State University’s Origins Project is hosting a lecture by Nobel Laureate Frank Wilczek, where he will discuss the “Materiality of a Vacuum: Late Night Thoughts of a Physicist” at 7 p.m. Tuesday, Jan. 31, at the Tempe Center for the Arts.In modern physics, scientists have found that it is fruitful to regard empty space, or a vacuum, as a sort of material, which can have within it exo...

'Nothing' and the universe

Arizona State University’s Origins Project is hosting a lecture by Nobel Laureate Frank Wilczek, where he will discuss the “Materiality of a Vacuum: Late Night Thoughts of a Physicist” at 7 p.m. Tuesday, Jan. 31, at the Tempe Center for the Arts.

In modern physics, scientists have found that it is fruitful to regard empty space, or a vacuum, as a sort of material, which can have within it exotic properties like superconductivity. Conversely, materials can be viewed from the inside and the vacua of alternative worlds, which often have exotic, mind-expanding properties. These ideas suggest new possibilities for cosmology and bring to life the profound question: What is a universe? Wilczek’s lecture will be followed by a conversation with Lawrence Krauss, director of the Origins Project. 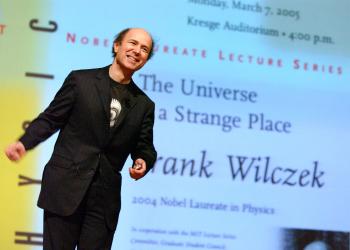 Nobel Laureat Frank Wilczek will discuss the role of nothing in our universe in an Origins Project-sponsored lecture on Jan. 31. Photo by Justin Knight Photography Download Full Image

“It is one of the most remarkable aspects of modern physics that the properties of our universe, with 100 billion galaxies each containing 100 billion stars, turns out to crucially depend on the properties of empty space,” said Krauss. “In this sense, ‘everything’ is determined by ‘nothing.’ Understanding how this comes about gives us a unique new perspective on our place in the universe. There are few people more capable of relating these new ideas than Frank Wilczek, who himself played a seminal role in discovering them.”

Wilczek is the Herman Feshbach professor of physics at the Massachusetts Institute of Technology, and he is an Origins Project distinguished professor at ASU. He received the Nobel Prize in physics in 2004 for his work on asymptotic freedom in the theory of strong interaction.

Krauss is an author, professor, physicist and public intellectual. In addition to being director of the Origins Project, Krauss is an ASU professor in the School of Earth and Space Exploration and in the Department of Physics.

Tickets for “Materiality of a Vacuum: Late Night Thoughts of a Physicist” are $7 and $17. ASU students can obtain free tickets (two tickets per student ID to be picked up the venue box office) for the event. A book signing and pizza will follow the event.