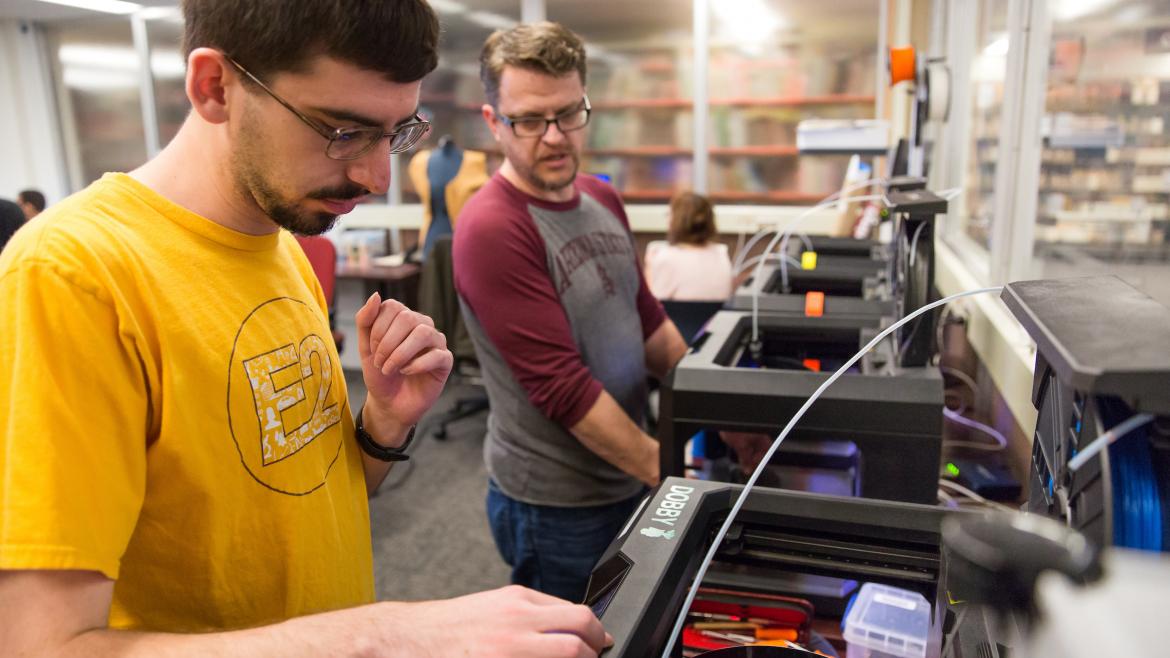 Make it at 'mkrspace': ASU hub of creative creation

In the past year, news organizations from The Atlantic to Fortune to Scientific American have reported on the “maker movement,” a technology-based extension of do-it-yourself culture that emphasizes learning through doing in a social environment. A November NPR story noted that the movement is alive in both community and school settings.

Barely a year old, the mkrspace is just one of a growing number of spaces across ASU offering a host of “mkrservices” that include access to 3-D printers, sewing machines, vinyl cutting, book scanning, film and studio space, and more.

“The mkrspace and what we’re doing with all of the mkrservices is tied to how we’re rethinking the library,” head of research and development for ASU Libraries Philip Konomos said. “This isn’t the library of 10 years ago. … It’s not about books anymore, it’s about learning spaces where students can collaborate and innovate.”

In addition to the mkrspace, there’s the mkrstudio on the third floor of Hayden Library offering video and audio production, as well as mkrgeo, a geographically themed makerspace on the third floor of Noble Library where students can build landforms and water bodies in the sand, 3-D print architectural models and experiment in cartography with paper maps.

“The vision is to have an overarching maker brand, and then to have instances in multiple libraries that match the needs of the communities that they’re serving,” ASU Libraries administrator Jennifer Duvernay said. “And that ties it into the academic library’s mission, to provide equitable access to resources.”

The services in each space are available to ASU students, faculty and staff free of charge, and there is always staff on hand to assist with any needs.

Joel Smalley, project coordinator for Hayden Library’s second-floor mkrspace, has been there since it opened in the spring of 2016. His business cards rest on his desk in a half-built model of the Eiffel Tower, a “repurposed failed 3-D print.” (The full, successful 3-D print of the tower resides downstairs in Charlie’s Café.)

Like all the staffers in the space — many of whom are student workers — Smalley is well-versed in every tool and piece of machinery. But his latest contribution was less technical, and more human: Smalley was working with a professor who wanted to teach a workshop on 3-D printing when he noticed she was having trouble explaining the intricacies in English.

“I decided to go with her strength and asked if she’d like to teach it in Mandarin,” Smalley said. The professor accepted, and now the mkrspace offers workshops taught entirely in Mandarin, Russian and Arabic.

The professor told Smalley being able to teach and learn in your native language “takes away two barriers: Technology can be intimidating to begin with, and learning about it in a different language can be even more intimidating.”

Inclusivity is another hallmark of the mkrservices.

“One of the inherent challenges with anything as big as ASU is trying to include the diverse student populations, and that’s something that the makerspaces have been really good about,” ASU Libraries communications specialist Brittany Lewis said. 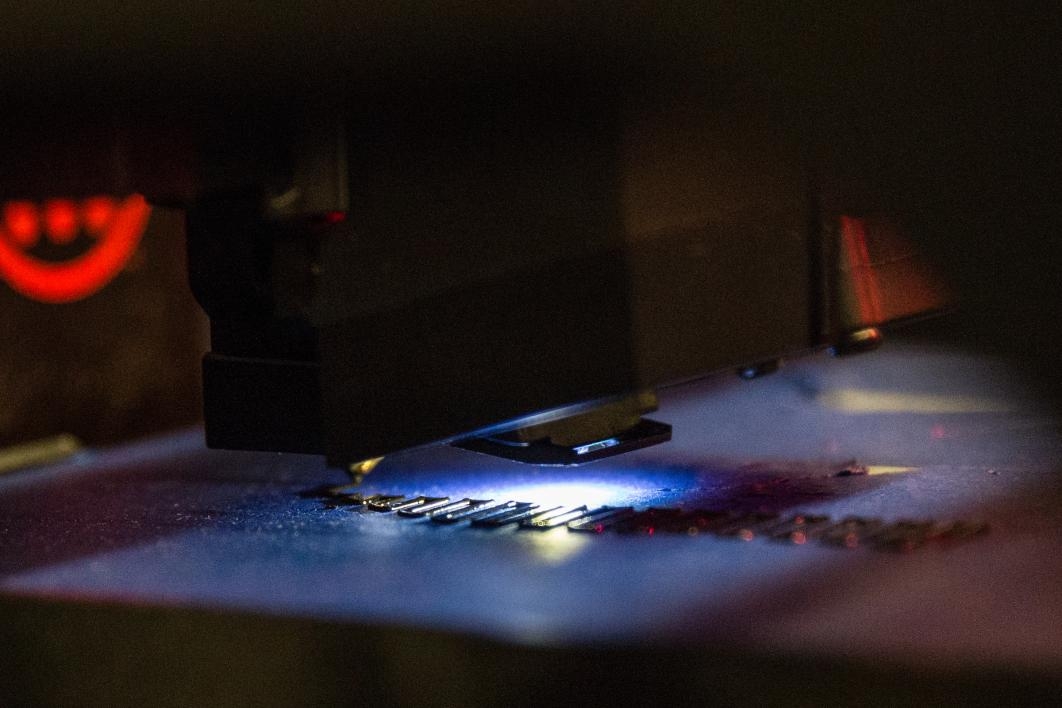 The printer lays the foundation for junior Allan Garry's project, a medallion from the video games Pokémon Sun and Pokémon Moon for part of a cosplay costume. 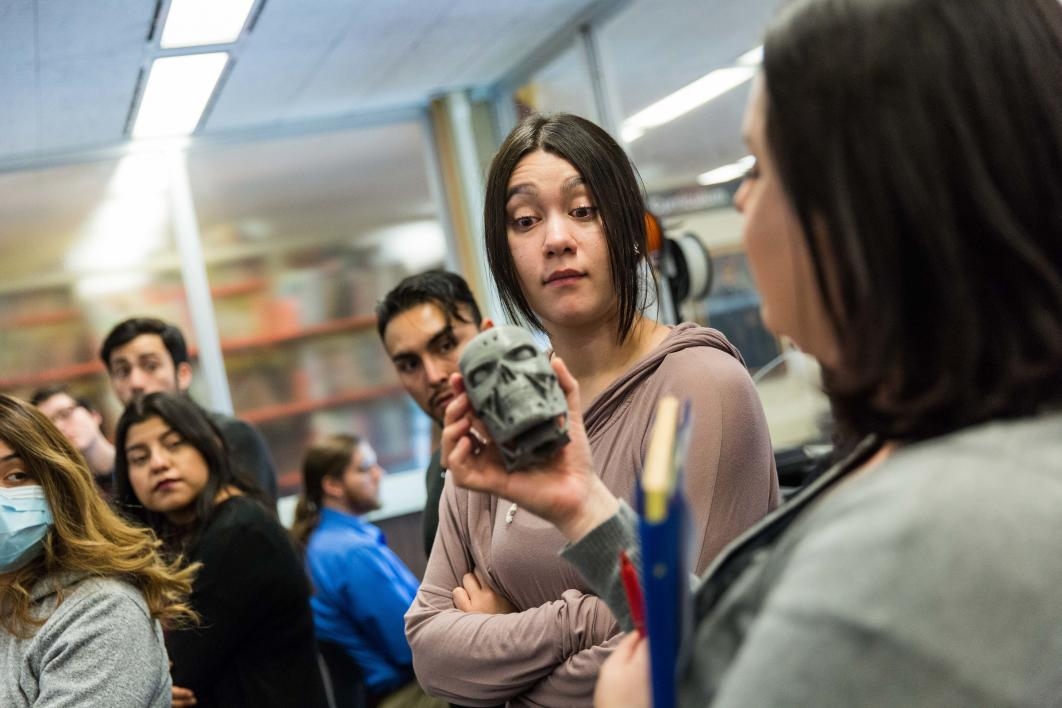 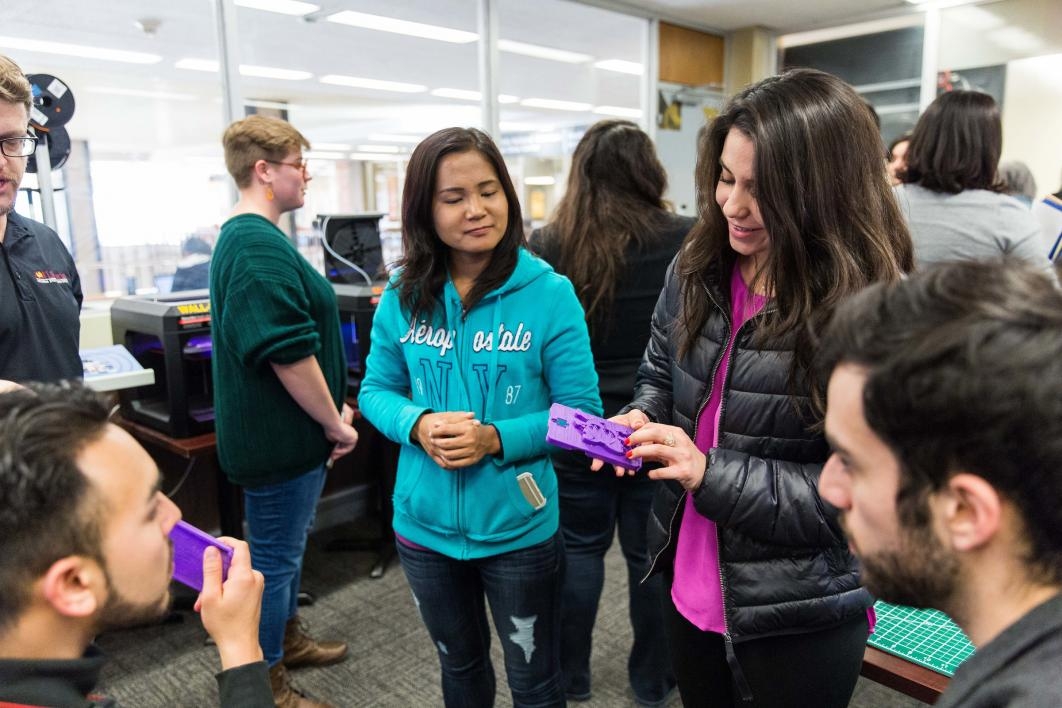 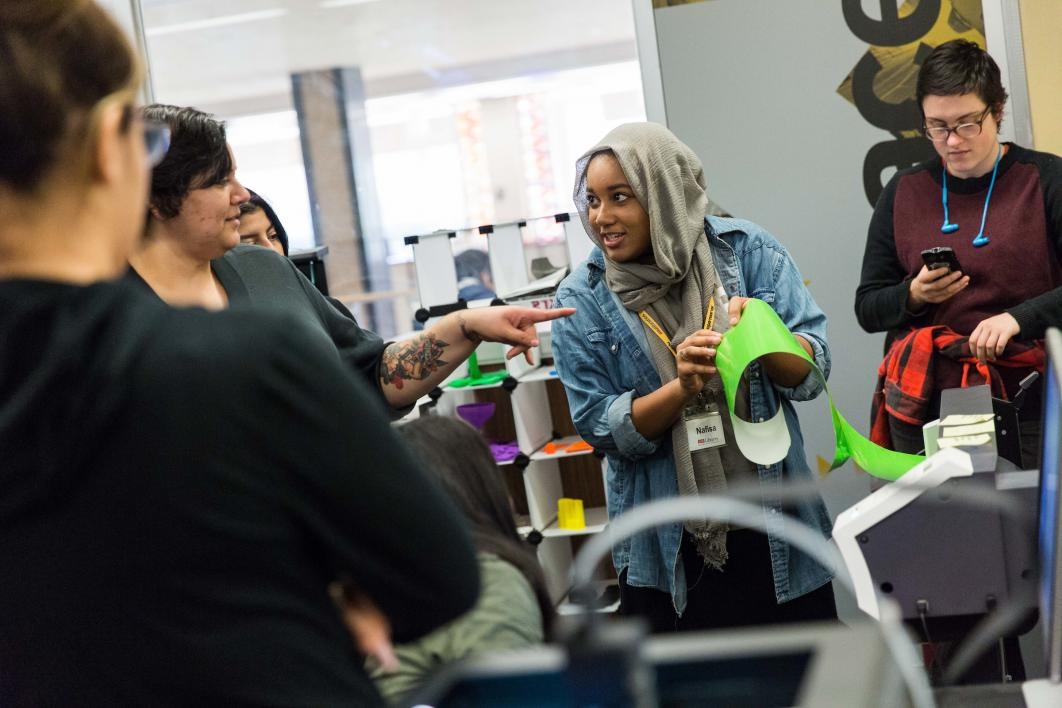 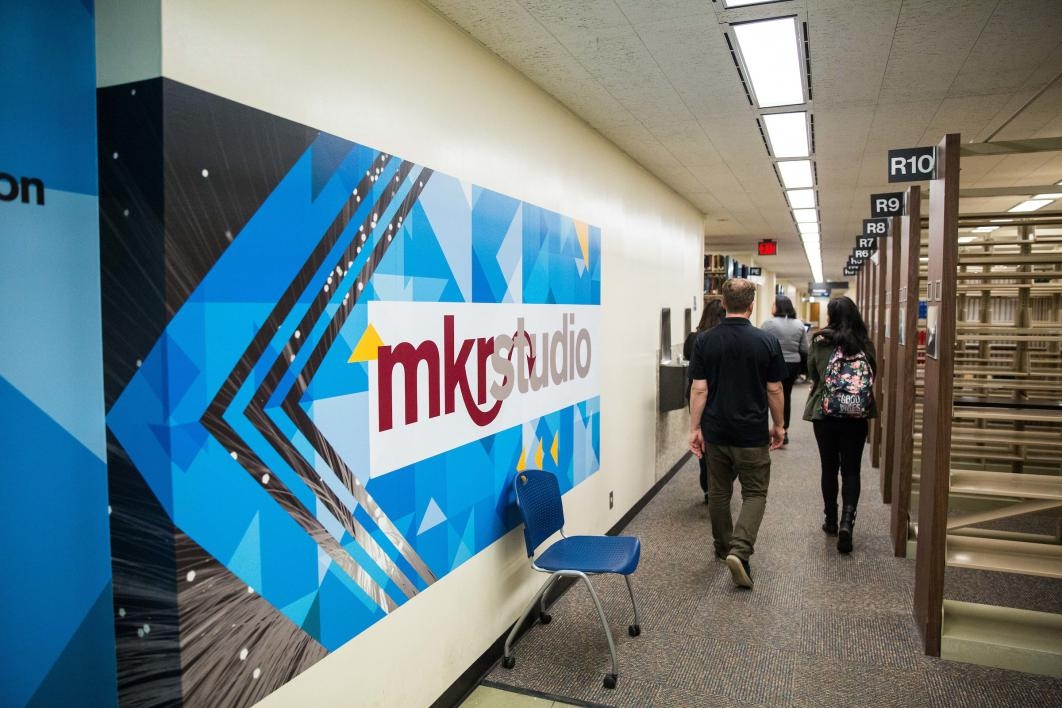 The vision for the ASU Libraries makerspaces is to have an overarching maker brand, with a space at each of the university's eight libraries that matches the needs of the communities they serve. Right now, there are three makerspaces: the second-floor "mkrspace" and the third-floor "mkrstudio" at Hayden Library, and "mkrgeo" on the third floor of Noble Library. 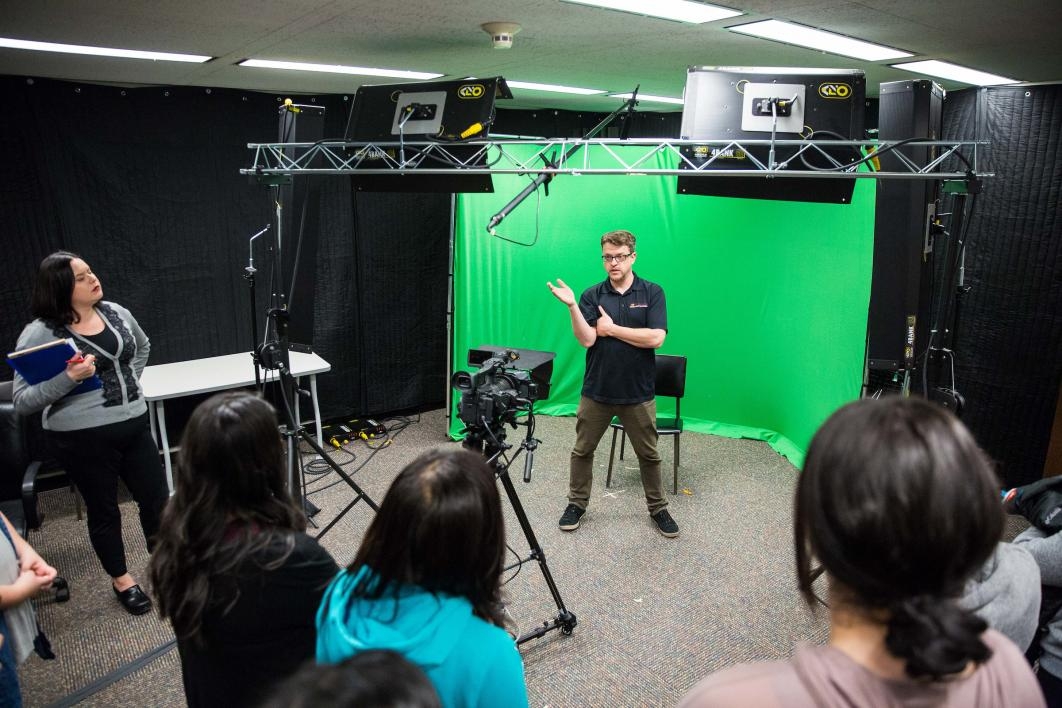 There have even been talks about collaborating with other Arizona universities’ makerspaces on a once-a-week workshop focused on the creative work of self-identified women, trans and femme makers.

“They’re really trying to make it an inclusive space for all communities,” Lewis added, “and if you can get the most diverse amount of people in one space, what can come out of that can be very interesting.”

Working together is not only encouraged but vital to the maker movement. And it’s not just the students who are doing it. ASU Libraries officials often have video chat sessions with UofA and NAU makerspace personnel regarding best practices.

“We’re not in competition with them,” ASU Libraries chief technology officer Steve Tanner said. “We visit with them, we learn from them and vice versa. It’s very much a collaborative spirit amongst the maker community.”

There’s also a big push to get more faculty engaged with the spaces.

“The mkrservices give faculty the opportunity to assign invention and creativity” instead of the usual papers and speeches, digital services librarian Wes Edens said. “Students can actually be assigned to express themselves a little bit more.”

In celebration of the Mexican holiday Day of the Dead, a professor brought students to the mkrspace to create 3-D prints of sugar skulls. Another professor had students use the book scanner and vinyl cutter to scan original sketches onto vinyl.

The third-floor mkrstudio is very popular with professors as well, who, Edens said, have used it to allow their students to compete in video case competitions and to record lectures for online courses, among other things.

“As you can imagine, almost any class might want to have a video component to it,” he said.

Though there may be a learning curve for some, library officials have faith that students can help professors get more involved. Even so, they’re happy to meet with faculty to show them everything the mkrservices can add to their curriculum. Recently, they met with some life sciences professors to show them some sample lesson plans and demonstrate how they could create 3-D models of DNA and proteins that could be passed around in class.

On a recent Thursday, assistant professor Monica De La Torre brought her Latina/o media and pop culture class to the mkrspace for an assignment that required them to create a product based on the class’ theme. She hoped using the space would get students to embrace their creative sides.

Interdisciplinary studies senior Natalie Figueroa was shocked by all the space had to offer.

“I’ve got so many ideas now,” she said. One is to create a Latina/o-themed garment using the sewing machine. “I was going to pay to take sewing lessons, but now I can just come here.

“I think I’m going to be using this space for a lot of other things, too. I was just talking to my friend about expanding our work skills, and this space allows you to get experience in all those little areas you never thought about before.”

Getting students excited about learning is what it’s all about, say library officials.

“It’s an opportunity for students to succeed in new ways,” Tanner said. “They get the chance to try something that’s way outside their wheelhouse, something they’ve never even thought of trying before, and they do it, and they find that they do it well.”

The spaces bring out a level of enthusiasm in students that is encouraging to the maker mission.

“It really goes to the heart of student satisfaction, student success,” Edens said. “The happier they are with their learning, the more joy that is brought into their learning process, the more successful they’re going to be. And I think the makerspaces are key to that.”

Arizona State University alumnus Nick Lambesis pursued a master degree with one goal in mind: to teach humanities at the college level. But his path to success led him down a different route.“My passion was education,” said Lambesis, who was a lecturer in the Department of English and other junior colleges in the Phoenix area for 12 years. “I had to put it on the back burner to make sure I c...

Arizona State University alumnus Nick Lambesis pursued a master degree with one goal in mind: to teach humanities at the college level. But his path to success led him down a different route.

“My passion was education,” said Lambesis, who was a lecturer in the Department of English and other junior colleges in the Phoenix area for 12 years. “I had to put it on the back burner to make sure I could support my family.” 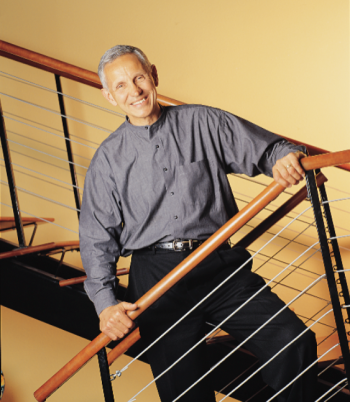 “The ASU humanities master’s degree was an exciting program that encompassed comparative literature, philosophy, music, film and fine arts,” he said. “And they had a faculty to match. The bonus was their open mindedness as it related to our thesis topic.”

Inspired by the Greek writer and philosopher Nikos Kazantzakis, Lambesis found his place as a humanist. He was in the middle ground between philosophers like Friedrich Nietzsche and Arthur Schopenhauer and the completely opposed Gautama Buddha.

“Kazantzakis was a brilliant mind and his worldview hovered in that rare but fascinating sweet spot,” said Lambesis. “He saw the good, the bad and the ugly of each and crafted his own philosophy, using literature as his vehicle.”

When Lambesis graduated in 1972, the humanities programs were eliminated in the Phoenix junior college system. He immediately pursued his second master’s degree in English literature so he could teach English in college.

After teaching for 12 years and having four sons, Lambesis became a freelance writer and later joined the creative advertising market. Currently, he’s the chairman and founder of The Lambesis Agency, which creates iconic brands by establishing a deeper emotional and cultural connection with consumers.

“I get to take all the very same elements of the humanities and apply them to the creative development of a brand,” he said. “In the advertising/brand world, we call them strategy instead of philosophy, copywriting instead of literature and of course music, film and art.”

The creative methods pioneered by The Lambesis Agency to brand clients have led to many new developments in marketing. The work of the agency has been publicized extensively in trade publications, college textbooks and featured in the movies “What Women Want” and “How to Lose a Guy in 10 Days.” In addition, it’s the only agency in the world to have four Coke brands: Dasani, FUZE, Gold Peak Tea and Honest Tea.

“I want to be a part of the vision and genius of Neal Lester,” said Lambesis. “I think he is taking the humanities in the direction it needs to go. We need the humanities to be, well, more human in a decent way. And all that creative stuff fits in but none of it matters if we’re not pulling it all together.”

Lambesis was named a 2016 CLAS Leader in honor of his professional success in the creative advertising industry. He was invited back to campus during homecoming to share his thoughts on the value of a liberal arts and sciences degree and induct the 2016 CLAS Student Leaders.

Lambesis encourages students and recent alumni to consider what they want to be remembered for after they’re gone. For himself, he said he wants his legacy to be that he made a difference in the lives of people: personally, professionally and in serving them.