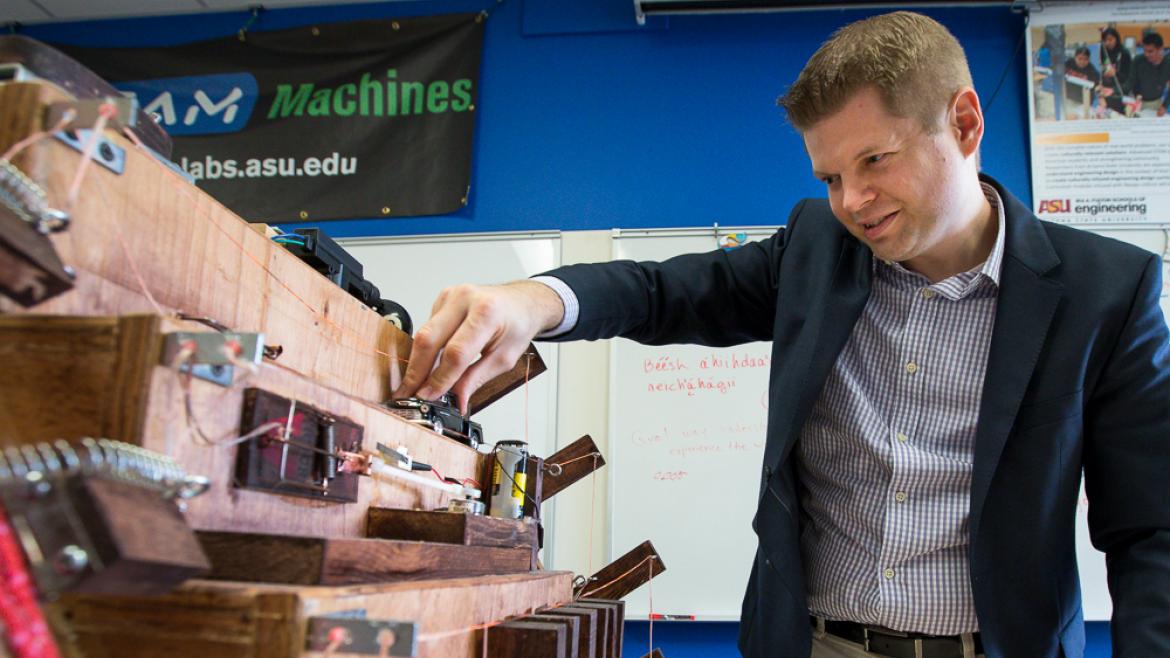 You’ve got a candle to extinguish. You could blow it out, or you could flick a domino that clicks into a mouse trap, which slaps a board, knocking a bowling ball down a chute, where it rolls into a bucket, spilling water that douses a candle.

That latter series is a Rube Goldberg solution, and an ASU researcher has leveraged the concept to get Navajo middle schoolers interested in engineering.

For his ingenuity, 38-year-old Shawn Jordan, an assistant professor in the Ira A. Fulton Schools of Engineering, has been honored by the White House as the winner of a Presidential Early Career Award for Scientists and Engineers. He was one of two Fulton teachers so recognized recently, among about 100 educators across the nation.

“These innovators are working to help keep the United States on the cutting edge,” President Barack Obama said in a statement, announcing the award. He added that their work shows “that federal investments in science lead to advancements that expand our knowledge” and “contribute to our economy.”

Jordan’s curriculum teaches engineering design together with Navajo culture to show students opportunities in science, tech, engineering and math. It “has the potential to inspire thousands of Navajo students to pursue careers in engineering and have a positive impact on the Navajo Nation,” he said, adding that the award was a surprise that left him “both humbled and honored.”

It’s the latest for Jordan, who at one point held the Guinness World Record for the longest working Goldberg contraption, a 125-step masterpiece of chain reactions. He has appeared on “Modern Marvels” and “Jimmy Kimmel Live!” and he worked on the PBS show “Design Squad.”

His work could improve diversity in STEM fields. The National Science Foundation reported that only 0.6 percent of all students enrolled in undergrad engineering programs from 2000-2009, the latest numbers available, were American Indian.

“Navajo students are hands-on learners and have been doing this type work in their everyday lives, but didn’t realize it was engineering,” said Kalvin White, administrator for the Navajo Nation Department of Dine Education. “When they realize engineering can give them an opportunity to be creative while helping their community and family needs, they see it as a real benefit.” 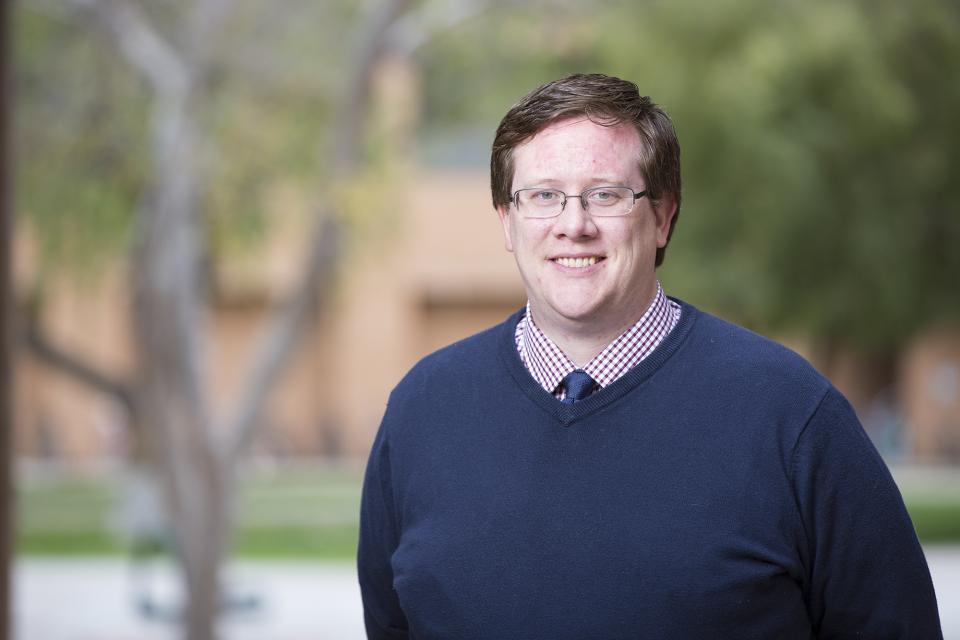 “Transfer limits in the power grid can prevent the use of clean, renewable energy from remote locations,” Hedman said. “While building new transmission infrascructure is a possible solution, new transmission is expensive and often comes with a great pushback based on a 'not in my backyard' philosophy.”

Hedman and a team of researchers developed optimization models and algorithms that harness the flexibility in existing transmission hardware to re-route electrical power around transmission bottlenecks.

In 2015, PJM Interconnection LLC, an electric transmission system serving 13 states and the District of Columbia, announced they would seek proposals to develop and implement his technology, estimating a savings of at least $100 million a year.

“Recognition at this level speaks very highly of the talent within the Fulton Schools and the transformative ideas and impacts produced by our faculty,” Fulton Dean Kyle Squires said. “The PECASE awards for Kory and Shawn are an incredible validation of the quality of their scholarship and effectiveness at advancing their ideas in ways that create new knowledge and the translational impacts that ultimately improve not only the economy but our society at large and quality of life.”

The contracts have been signed. The equipment has been moved. The sets have been built. And now students are in class.ASU film professor Janaki Cedanna (pictured above) has been charging hard the past six months, but he was all smiles this week. His dream of boosting the university’s film program has come true through an innovative partnership with Sun Studios of Arizona that gives more than ... 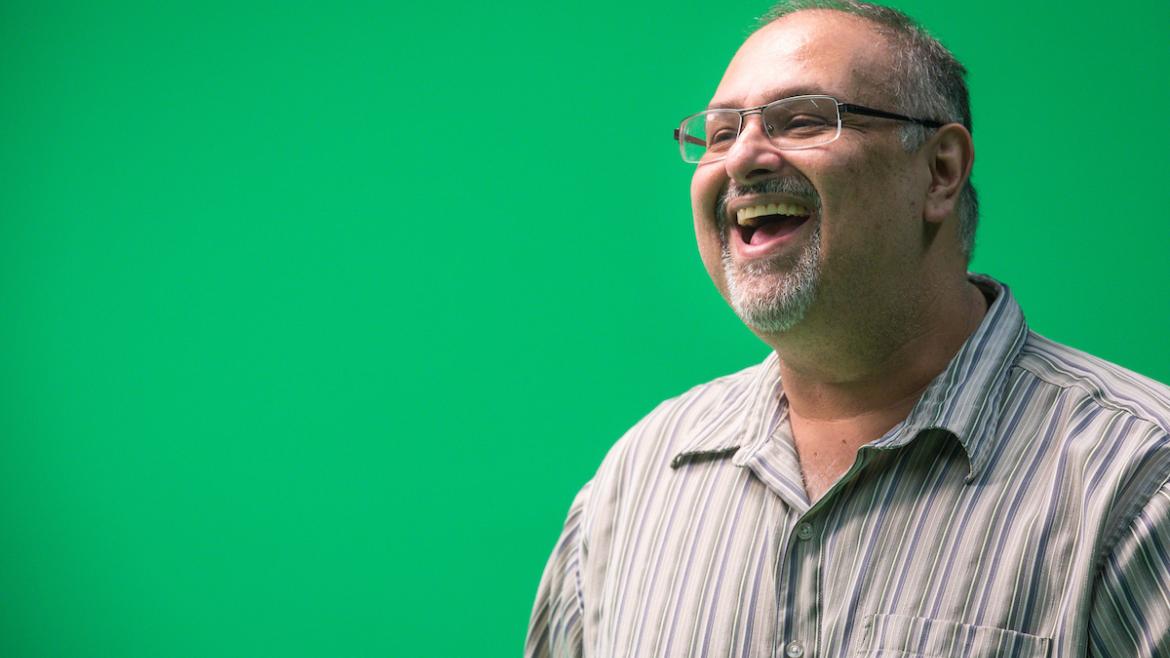 The contracts have been signed. The equipment has been moved. The sets have been built. And now students are in class.

ASU film professor Janaki Cedanna (pictured above) has been charging hard the past six months, but he was all smiles this week. His dream of boosting the university’s film program has come true through an innovative partnership with Sun Studios of Arizona that gives more than 600 students access to state-of-the-art soundstages and production facilities.

“It’s the biggest move that the ASU film school has ever had and is a quantum leap forward,” said Cedanna, a clinical assistant professor for the School of Film, Dance and TheatreA school within the Herberger Institute for Design and the Arts.. “We’ve done well in the past with limited facilities and have had a lot of student success, but this takes us to another level.”

Cedanna, a film industry veteran of more than 20 years with credits such as “The Doors,” “Nash Bridges,” “Made in America,” and “The Graves,” said Sun Studios gives students access to professional-level facilities and equipment and puts ASU on the same playing field as other major film schools.

ASU signed a 3½-year lease with Sun Studios, which is less than 2 miles from the Tempe campus. Cedanna said the studio was the former site of Collins College, but Sun Studios took over the 17,500-square-foot, two-story building in May 2016.

Cedanna said he saw an opportunity to merge forces when the parent company of Collins College filed for bankruptcy. 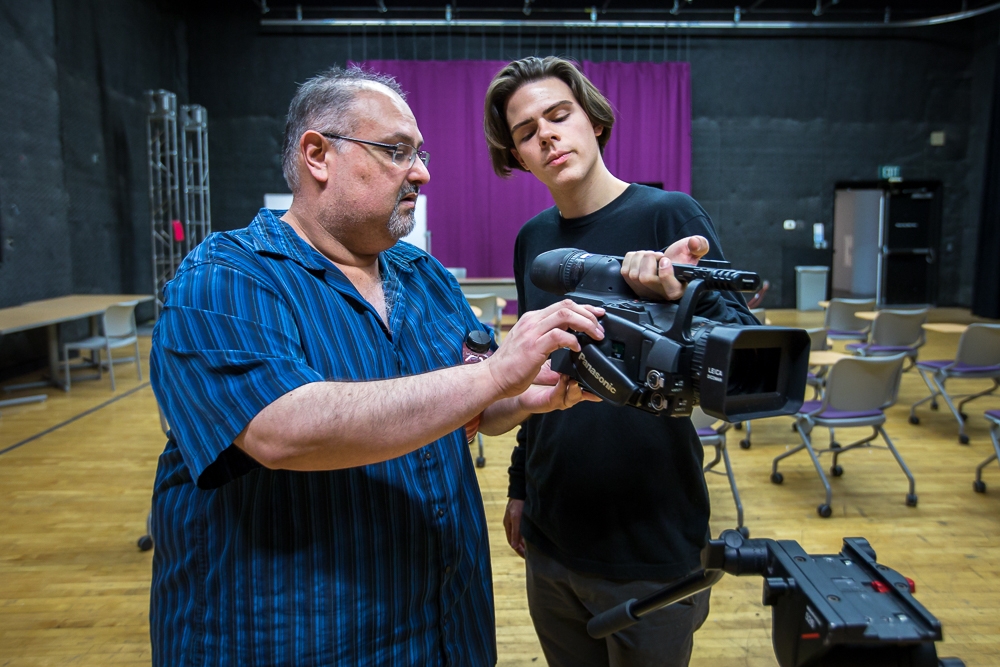 Clinical assistant professor Janaki Cedanna (left) goes over one of the cameras with junior Pete Magine inside Studio One at the new home of the Herberger Institute's film school inside Sun Studios of Arizona. 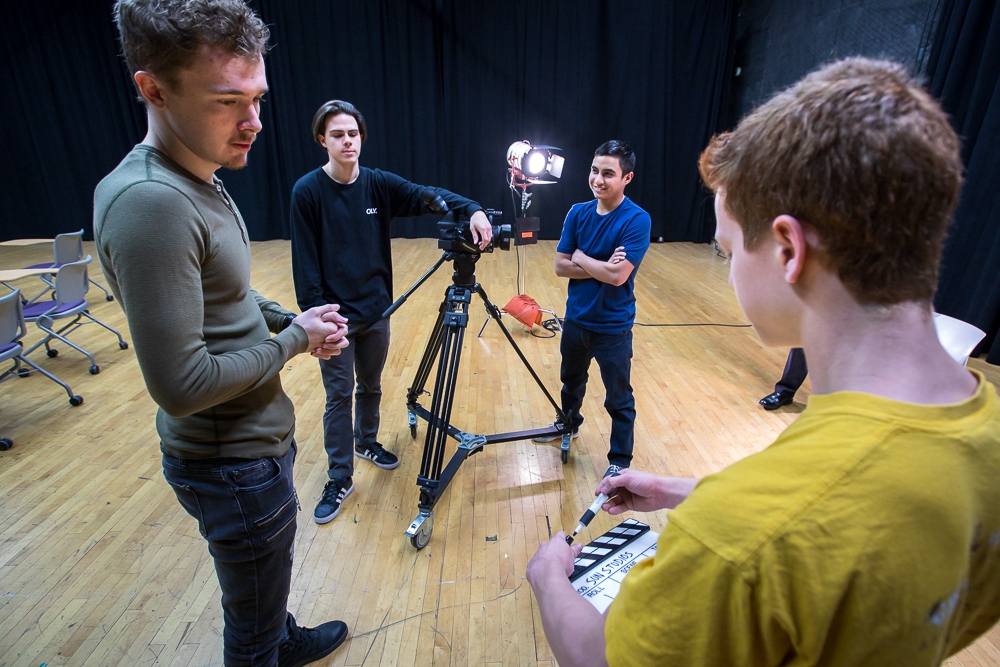 (From left) Josh Belveal, Pete Magine, Lucas Tipton and Quinlan Donovan talk about lighting and filming, using some of the production equipment in Studio One. The students are all part of the Herberger Institute's Film and Media Production sequence. 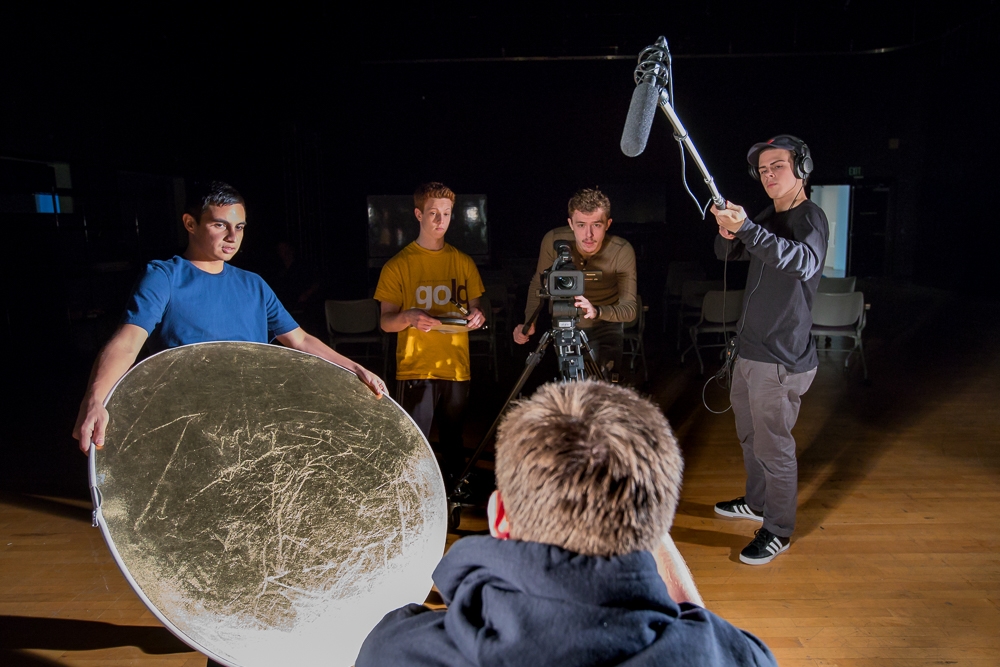 (From left) Lucas Tipton holds a reflector while Quinlan Donovan watches, Josh Belveal films, Pete Magine works the audio and Jacob Duell sits in as the subject, as they demonstrate filming a single subject with two lights.

"We fought for it, had several meetings about it, and we're grateful this has happened," Cedanna said. "For years we've been trying to find ways to deal with the growth of this program, and now we're meeting it."

ASU debuted the new facility on Jan. 9. It includes a 2,500-square-foot soundstage; a 2,200-square-foot soundstage with a two-wall infinity cyclorama and green screen; a soundproof audio recording suite; a large selection of props, gear and professional-grade production and recording equipment; a 150-seat theater with professional digital projection and surround sound.

Film majors said it was like going from a small indie to a summer blockbuster.

“These professional facilities make it easy to create things and do the work,” said Nathaniel Harter, a 20-year-old film major who wants to pursue sound design. “It’s like when you have a beautiful guitar — easy to play and ergonomic to your fingers.”

Aspiring screenwriter Taylor Blackmore said the studios will “give me a chance to see a project come to fruition instead of becoming a script on a shelf.”

The program’s success sounds like it could have been scripted. Established in 2006 with just 20 people attending, it has grown exponentially each year to approximately 640 students.

“Even in the lean years of the economic crisis, we’ve always had growth,” said Cedanna. “The film industry is no longer a pipe dream but an attractive reality.”

“This building will be filled with writers, directors, producers and actors, and the climate to work with each other will be natural,” Ganssle said. “If they need someone for their films, they will know exactly where to go and who to talk to. The possibilities are truly exciting.”

“Justice Served,” written and directed by Marvin Young (Young MC), was shot in the summer 2014 and will be released this year.

“Postmarked,” a dark comedy written by Ganssle and playwright Ron Hunting, was filmed in summer 2015 and directed by Ganssle with support from ASU. Ganssle said the production is working on a deal for distribution to release the film later this year.

With the new facilities, ASU’s robust film programs and the reestablishment of the state’s film office in late 2016 through the help of GoDaddy founder Bob Parsons, film production in Arizona could surge.

“All of these things," Cedanna said, "puts ASU in a very good place.”