Arizona State University provides laboratory coat laundry services to all ASU researchers on every campus. The current program can launder around 2,000 lab coats, about 50 per week, and is free for lab employees. The pilot laundered 500 lab coats since fall 2016. 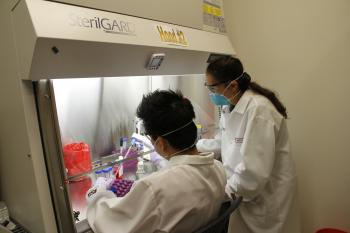 The expanded lab-coat laundry program has cleaned about 500 lab coats since fall 2016 and has the capacity to clean 2,000 coats. Download Full Image

“This program protects researchers and keeps the research in the lab where it belongs,” according to Amanda Hoyt, Ira A. Fulton Schools of Engineering chemical safety specialist. “Having an effective way to launder lab coats and making it free and convenient to use makes lab coats much safer.”

Most researchers have a lab coat drop-off location near their laboratory, but some locations may mail lab coats for laundering. Learn more about how to participate from the lab coat webpage.

The program began when EHS Compliance Officers identified that many labs could not find a cost-effective laundry service. Fulton Schools compliance officer Alana LaBelle presented the concept to the EHS Policy Committee in May 2016.

A team of EHS staff, departmental safety compliance officers and representatives from Mail Services and Procurement introduced the concept and recommended the program to university administrators.

Knowledge and Enterprise Development and University Business Services jointly funds this program for the first year.

This year the Justice and Social Inquiry faculty in the School of Social Transformation at Arizona State University is proud to host U.S. Supreme Court Associate Justice Sonia Sotomayor as the guest speaker for its annual John P. Frank Memorial Lecture on Monday, Jan. 23. Now in its 18th year, the lecture will feature a conversation between U.S. Supreme Court Associate Justice Sotomayor and the H...

This year the Justice and Social Inquiry faculty in the School of Social Transformation at Arizona State University is proud to host U.S. Supreme Court Associate Justice Sonia Sotomayor as the guest speaker for its annual John P. Frank Memorial Lecture on Monday, Jan. 23.

Now in its 18th year, the lecture will feature a conversation between U.S. Supreme Court Associate Justice Sotomayor and the Honorable Mary Schroeder, Chief Judge Emeritus, Senior Circuit Judge, United States Court of Appeals for the Ninth Circuit. The public talk, which is free and open to the community at large, concludes a day of student and faculty sessions with Associate Justice Sotomayor. Additionally, there will be an invitation-only reception prior to the lecture. 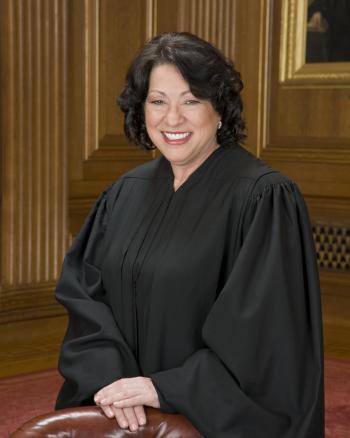 “We anticipate a full house for this year’s special guest,” Adelman said, “given community interest in how the court navigates the relationship between law and justice, and emerging questions about the constituent roles of the three main branches of U.S. government: executive, legislative, and judicial.”

In 1991, President George H.W. Bush nominated her to the U.S. District Court, Southern District of New York, and she served in that role from 1992–1998. She served as a judge on the United States Court of Appeals for the Second Circuit from 1998–2009. President Barack Obama nominated her as an associate justice of the Supreme Court on May 26, 2009, and she assumed this role August 8, 2009.

This signature lecture series honors the memory of lawyer John P. Frank (1917-2002). Frank is recognized as part of the team that represented Ernesto Miranda before the U.S. Supreme Court in 1966. Frank wrote or delivered arguments for numerous First Amendment and desegregation cases, and made important contributions to the historical brief for Brown v. Board of Education (1954). He is remembered as well for his expertise in civil procedure and standards for judicial disqualification. As a constitutional scholar, historian, author and mentor, his opinion was sought by presidents and Supreme Court justices, and was influential in shaping public policy in Arizona and across the nation.

The event is free and open to the public. Tickets are required for admittance. Tickets will be distributed outside the North Lobby of Gammage Auditorium from 3:30-5 p.m. Jan. 23, on a first-come, first-served basis. Each person may request up to two tickets. Gammage Auditorium is located at 1200 S. Forest Avenue, Tempe, 85281. For directions and parking information, visit http://www.asugammage.com/visitor-information/directions-and-parking.

For more information, visit asu.edu and search for “Frank Lecture,” or https://sst.clas.asu.edu/frank-lecture