Arizona State University junior Christopher Cadeau wants to help change the narrative that veterans are either homeless or heroes, and he has created a radio show dedicated solely to telling more diverse stories of the people who’ve served.

A 30-year-old sports journalism major at the Walter Cronkite School of Journalism and Mass Communication, Cadeau said was pleased with the results of his first semester behind the microphone. He is also pushing to get better.

“Honestly, I’m never satisfied, and it’s hard for me to accept praise,” said Cadeau, whose background includes eight years in the Marines. He also has five years of recovery.

“I once asked my sponsor, ‘When does this chip on my shoulder go away? When am I going to be OK with where I am in my life?’”

That chip developed as a young child growing up in Canton, Michigan, Cadeau said. He cites his parents’ divorce at age 4 and the rape of a sibling as the first of several emotional blows. As a teen, Cadeau got into trouble with the law and embraced drugs and alcohol. He knew the Marines could turn his life around.

He said the cons were just as clear. “If you stay here, you will go to jail.”

Cadeau said he joined the Marines in 2006 and ended up as a fighter jet mechanic, working on F-18s in Miramar, California, near San Diego. He transitioned back into civilian life and took advantage of his GI Bill benefits, eventually being accepted into ASU in December 2015.

He wanted to pursue sports journalism after a heartfelt discussion with a sponsor in his recovery program.

“My sponsor asked, ‘What do you love to do?’ I told him I love sports journalism and have always been infatuated with it,” Cadeau said. “If you add up all the hours I’ve spent in sports from the moment I come home to the time I’m on my smartphone looking up results, I need to find a way to get paid for this.”

He also called ASU’s Pat Tillman Center for Veterans and spoke to Joanna Sweatt, a former military advocate at the center. Cadeau said her first words were, “Everything’s going to be OK.”

“We’re always trying to find new ways to engage student vets, and because Chris is a journalism major, the idea of a radio show came naturally,” said Schmidt, a recruitment specialist. “Chris is a natural leader and saw this not only as a challenge, but as way to impact lives and change the narrative about veterans.”

Schmidt said Cadeau shows how veterans are returning to college and civilian life and making a difference in their communities. He said stereotypes pigeonhole and marginalize returning soldiers; Cadeau's show helps change that perception. 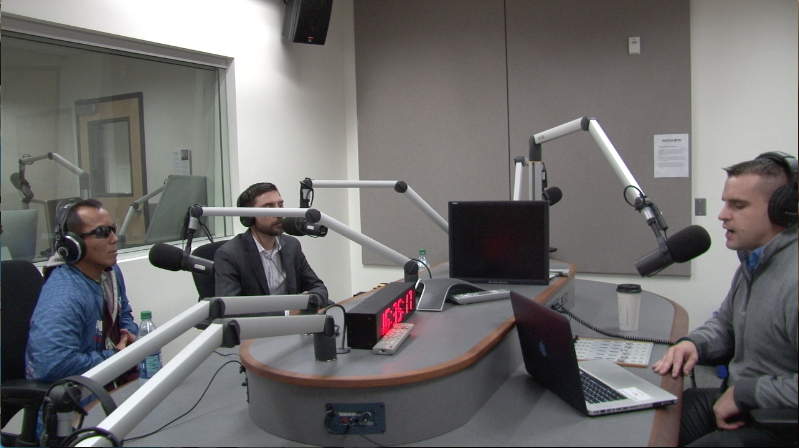 The broadcast runs from 4:30 to 5:30 p.m. each Wednesday during the semester. Cadeau said the premise of “Veterans Diaries” is about empowerment and overcoming obstacles.

“There are already a lot of sports shows on The Blaze, and I wanted to do something that had impact on the community," Cadeau said. "Stories one hears on the show can help other veterans, and civilians can see they aren’t broken and everyone has hiccups in their lives."

Cadeau said it took him a while to catch on before he hit his stride, and stopped a practice he employed in the beginning of the show.

“I’d conduct these pre-interviews with my guests, and they’d sit with me and tell me all these great things. And when we’d get on the air, it was crickets,” Cadeau said. “I discovered by knowing all the answers beforehand, I’d be leading them into questions I already knew the answer to, and it took my curiosity away. I don’t do that any longer.”

Army veteran and Purple Heart recipient Ian Parkinson, who was the first guest on the show and has been interviewed by international media, said Cadeau was an excellent host.

“The dialogue didn’t feel set up, and it was organic,” said Parkinson, a ASU graphic information technology major. “Chris isn’t afraid to ask questions because he can relate to me because of his military background. He has a passion for this show, and he made me feel I could be open about a lot of things.”

Around the sixth episode, Cadeau says he realized he wasn’t serving his entire audience. He had been ignoring angry vets who needed to vent.

“If I’m not highlighting the entire military demographic, then I’m not doing my job as a journalist,” Cadeau said. “Then I started bringing them on the air, and noticed some of the shows started taking off.”

By taking off, Cadeau means some of his most popular shows would receive 850 clicks and more than two dozen shares.

Cadeau said he tries “to keep people in their ‘whys.’”

“I don’t want to know what people do; I can do an Internet search and figure that out,” he said. “But when you talk about why they do what they do, everything starts to resonate.”

Sweatt was on “Veterans Diaries” for a two-part episode and called the show cathartic.

“His show serves to tell stories about the military experience, the transition road and individuals’ victories in the face of adversity,” said Sweatt, COO for the Veterans Directory.

For the upcoming semester, Cadeau is preparing for at least a dozen shows, including a Pat Tillman tribute with friends, teammates and other associates.

“The show is good now, but I’m really looking forward to where it will be in a year,” Schmidt said.

“Veterans Diaries” will air again Jan. 11 on Blaze Radio, which can be heard on 1330 AM or on the website. Previous episodes are available on the "Veterans Diaries" SoundCloud page.

Paektu volcano, on the border between the Democratic People’s Republic of Korea and China, had its most recent eruption circa 946. Dubbed “the Millennium Eruption,” this event covered the entire Korean peninsula in ash. The big question is when this active volcano will erupt again.ASU’s School of Earth and Space Exploration postdoc Kayla Iacovino (pictured above), along with scientists fro... 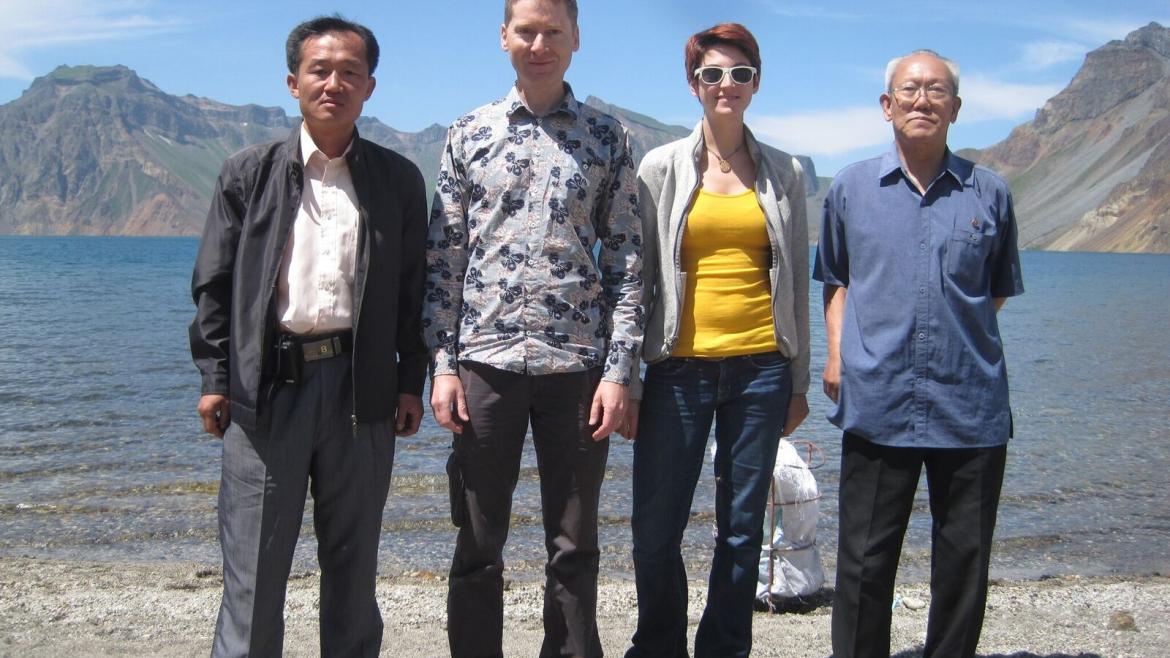 Paektu volcano, on the border between the Democratic People’s Republic of Korea and China, had its most recent eruption circa 946. Dubbed “the Millennium Eruption,” this event covered the entire Korean peninsula in ash. The big question is when this active volcano will erupt again.

ASU’s School of Earth and Space Exploration postdoc Kayla Iacovino (pictured above), along with scientists from North Korea and the United Kingdom, joined forces — and navigated miles of political red tape — to study this volcano and determine what potential impacts it could have when it erupts again. Their findings were recently published in Science Advances.

“Doing research in this area has its challenges,” Iacovino said.

To start, it’s against the law for North Korean people to speak with foreigners. In addition, international sanctions prevent most people from visiting North Korea, let alone bringing scientific equipment.

The team persevered, however, for two years, navigating embassies, forms and permissions from foreign governments. The work paid off in 2013 when the UK/U.S. team was able to not only set foot in North Korea, but to work directly with local North Korean scientists.

“We were able to build trust between the two sides,” Iacovino said. “We share data equally, and both sides get a lot more done working together in understanding the volcano’s history.”

Paektu volcano is well known to North Koreans and is important to their culture, appearing on paintings and Korean money like this 50-won note.

The North Korean scientific community is well aware of the dangers of such a large active volcano and has been studying the area for decades — and for good reason. A large eruption from a volcano like Paektu, while rare in human history, can cause massive damage to lives and property. The ash it spreads can affect global trade routes, crop yields, climate change and the spread of infectious diseases.

Iacovino, who is both a volcanologist and petrologist, was able to specifically contribute to the team through her expertise in studying the origins of volcanic rocks. As a petrologist, Iacovino takes rocks that she finds in the field and recreates “mini-magma chambers” in the lab, essentially recreating the conditions of heat and pressure that originally formed the volcanic rocks. This helps provide clues to the history of the volcano, helping to predict future behavior.

Iacovino and the international team also found evidence of partial melt beneath the volcano, also published in Science Advances in April 2016. They used seismometers to image the subsurface beneath Paektu and were able to locate a region of magma storage, which is likely the same magma chamber that was the source region for the erupted material during the Millennium Eruption. 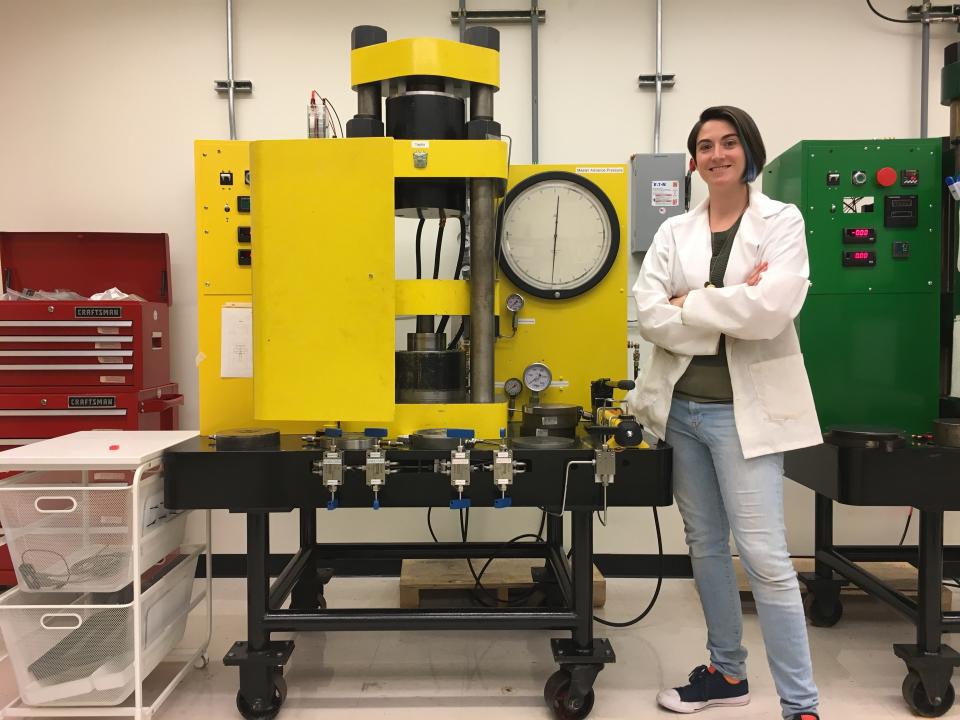 Kayla Iacovino, who is also an ASU alum (geology, 2010), is a postdoctoral researcher in the EPIC lab, run by SESE assistant professor Christy Till. Iacovino is featured here with the EPIC lab’s end-loaded piston cylinder.

The next step for the team is to rally for new funding for ongoing science collaboration on the volcano. Another big goal is to have science teams from China and North Korea communicate with each other and, ultimately, get all the various analyses of the volcano working in tandem.

By collectively monitoring and surveying ongoing changes at this active volcano, the team hopes to have a better understanding of when it may erupt again.

Top photo: Researchers (from left) Kim Ju-Song, Clive Oppenheimer, Kayla Iacovino and a North Korean geochemist on the shore of Lake Chon, in the caldera of Paektu.