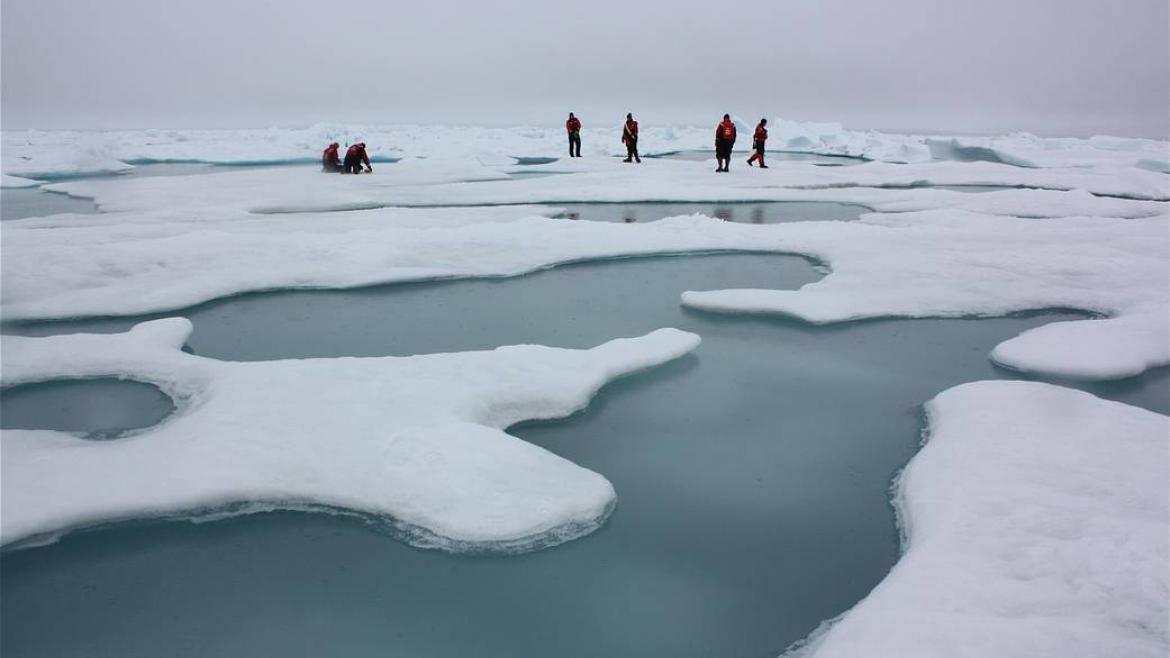 Hose-and-windmill setup would help Arctic do what it does naturally: make ice.
Idea might be crazy, but doing nothing is "what’s really crazy," ASU prof says.
December 22, 2016

The idea started after a depressing climate conference in 2012: ASU’s School of Earth and Space Exploration (SESE) professor Steve Desch walked away feeling that the only scientific solution anyone was proposing to combat climate change was to radically reduce CO2 emissions, a near impossibility in a world filled with people and their machines.

“We can’t put the world back the way it was,” Desch thought, “so how can we at least work on fixing part of the problem?”

He started thinking about solutions that might work in the Arctic, where the effects of climate change are some of the most severe. In the Arctic, thawing of permafrost and melting sea ice has led to a positive feedback, an ever-increasing cause-and-effect loop, on Earth’s climate. So Desch started looking for ways to reverse the sea ice loss.

The idea he pursued, beautiful in its simplicity, is to build millions of windmill pumps to make more ice.

Desch, a theoretical astrophysicist, joined forces with SESE’s Christopher Groppi, a systems engineer, and Hilairy Hartnett, an oceanographer with SESE and the Julie Ann Wrigley Global Institute of Sustainability, to teach a course at ASU that would focus on this idea: a windmill pump on a buoy with a hose, a device that would artificially increase the thickness of ice in the Arctic. Together with their students, they essentially combined three interdisciplinary creative strengths to find a way to make their plan work.

They called the innovative course “Geodesigning the Arctic,” and the class’s research and proposed solution is presented in a recently published article titled “Arctic Ice Management” in the American Geophysical Union’s journal Earth’s Future.

Ice in the Arctic is melting faster in the summer and not building enough in the winter. This represents a strong positive feedback on climate because while ice reflects 90 percent of sunlight, the ocean absorbs 90 percent of sunlight, so the less ice there is, the more heat the planet absorbs. In addition, when Arctic permafrost ground melts, it releases methane, amplifying the greenhouse effect in the atmosphere just like CO2. All told, we’re quickly running out of time to reverse this vicious cycle of cause and effect.

Leading climatologists estimate that we have fewer than 20 years to make serious changes, or this sequence of less Arctic ice in the winter and more melting during hotter summers will lead to the Arctic Ocean being completely ice-free in summer as soon as 2030, driving temperatures even higher throughout our planet. Arctic sea-ice extent (area covered at least 15 percent by sea ice) in September 2007 (white area). The red curve denotes the 1981-2010 average. Sea-ice extent in 2016 was the second lowest ever recorded. Image courtesy of the National Snow and Ice Data Center

“Ice-free summers are in our future,” Desch said. “We have to do something now, and we have to do it in the Arctic.”

Since human habits are unlikely to change so dramatically that this cycle can be reversed, the question to scientists now, argues this research team, is how to make more ice in the winter or keep it frozen in summer.

Scientists and students in the ASU class focused on the first half of the puzzle, building models and consulting observations to determine how ice freezes and thickens. They calculated that 1.4 meters of seawater pumped to the frigid surface during the long Arctic winter night lets it freeze more readily and produces an additional 1 meter of ice in a single winter. This would help the Arctic do what is already does naturally in the winter: make ice.

This is where the windmill pump on a buoy with a hose takes center stage. If water in the Arctic could be pumped to the surface, it would freeze faster. The Arctic already provides a steady, renewable source of wind power; the windmill would give power to the pump, the buoy would keep the contraption afloat in summer, and the force of the water from the hose would help distribute the water around the windmill.

Each windmill-powered pump could spread ice over about a 0.1-square-kilometer area in the Arctic. About 10 million windmills would be needed to cover a large enough area to be effective. At an estimated cost of $50,000 per windmill, implementation over 10 years would cost about $50 billion per year.

“The scale of climate change and associated problems is so large it paralyzes us into inaction,” Desch said. “But we can make real progress in the Arctic by putting people to work and using just a fraction of the industrial capacity that accidentally caused climate change in the first place.”

If the design works, the windmill-powered pump could effectively reverse the ice-loss trend and even potentially make more ice. And there’s an added benefit to humans in creating ice. If sea ice stays frozen for several years, its salt leaches out, leaving potable water. Polar explorers relied on this, and harvesting polar ice could help supply fresh water to cities and farms.

“Maybe trying to make more ice in the Arctic using windmills and pumps and hoses is a crazy idea,” Desch admitted, “but what’s really crazy is doing nothing while the Arctic melts.”

The next step the team proposes is to work with colleagues internationally to promote the idea of Artic ice management and apply these ideas to saving, and perhaps creating, more Arctic ice. They will then need to build prototypes of the windmill pump to see what would work in the real world. They also propose working on the second half of the puzzle, using other ice-saving ideas like marine cloud brightening, essentially making fog and blocking sunlight, to stop the ice from melting in the summer.

Most of all, they want the discussion to broaden beyond scientific circles, to include policy makers and other stakeholders in the Arctic.

“We hope to provoke discussion and action,” Desch said. “Whether we choose to be in or not, we’re in charge of the climate now, so let’s all do the best we can.”

Internationally acclaimed jazz drummer Lewis Nash, named the most valuable player in jazz by Modern Drummer Magazine, will join the faculty of the ASU School of Music in January 2017 as the Bob and Gretchen Ravenscroft Professor of Practice in Jazz.“We are thrilled that Lewis Nash has agreed to join our School of Music community and return to his home,” said Heather Landes, director of the Ari...

Internationally acclaimed jazz drummer Lewis Nash, named the most valuable player in jazz by Modern Drummer Magazine, will join the faculty of the ASU School of Music in January 2017 as the Bob and Gretchen Ravenscroft Professor of Practice in Jazz.

“We are thrilled that Lewis Nash has agreed to join our School of Music community and return to his home,” said Heather Landes, director of the Arizona State University School of Music. “Mr. Nash not only brings his international reputation and knowledge as one of today’s most distinguished jazz artists to our program, but our students will benefit greatly from his outstanding teaching and mentorship.” 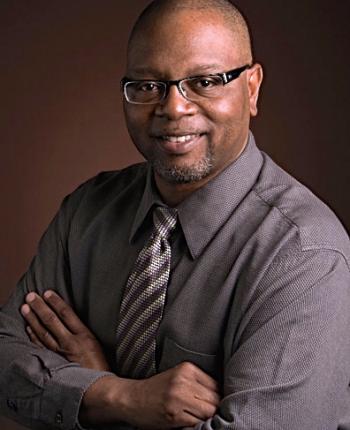 Nash is the drummer of choice for an incredible array of artists — from jazz masters to the hottest young players of today — and is equally in demand as a clinician and educator. His career spans over 30 years and includes performance on 10 Grammy award–winning albums and an impressive discography of over 400 recordings with jazz legends such as Betty Carter, Tommy Flanagan, Dizzy Gillespie, Oscar Peterson, McCoy Tyner, Hank Jones, Joe Henderson, Sonny Rollins, Ron Carter and Clark Terry, as well as such contemporary jazz artists as Branford Marsalis, Wynton Marsalis, Diana Krall, Joe Lovano and Roy Hargrove. Nash has become a highly sought after jazz educator and is sponsored by Sakae drums, Zildjian cymbals, Remo drumheads and Vic Firth drumsticks.

Nash was born and raised in the Phoenix metropolitan area, attending Percy L. Julian School, East Phoenix High School and Arizona State University. Nash credits local mentors in the 1970s, pianists Charles Lewis and Keith Greko, pianist-composer Prince Shell, saxophonist Allan Chase and ASU jazz program founder Bob Miller with giving him a tremendous foundation and his start in jazz. Nash moved to New York in 1981 but has kept many ties with the Phoenix community, and in 2012 the local jazz organization, Jazz in Arizona, founded The Nash, a jazz club in downtown Phoenix named for Nash. The club is now recognized by Downbeat Magazine as one of the top jazz venues in the United States.

“This is a tremendous opportunity for our students and faculty,” said Michael Kocour, associate professor and director of jazz studies. “While I as a longtime jazz educator may hypothesize with our students about the performance practices and compositional thinking that have gone into the making of some of the most significant jazz recordings of our time, Lewis Nash can speak to our students directly about what it was like to actually make those recordings. There’s a big difference.”

Nash will teach applied lessons, a rhythm section class, jazz combos and a jazz repertoire class, and will contribute to community engagement and recruiting the talented jazz musicians of tomorrow for the ASU School of Music jazz studies program. Nash will continue his active schedule of performances around the world as part of his faculty role.

“I am truly honored to accept the Bob and Gretchen Ravenscroft Professor of Practice role in the ASU School of Music,” Nash said. “The school’s mission of preparing creative leaders who will transform our society through music inspires me, and I look forward to the opportunity to play a role in the nurturing of the next generation of jazz artists.”

This named position was made possible by a sizeable gift from Bob and Gretchen Ravenscroft, longtime supporters of the ASU jazz program. Bob Ravenscroft is an accomplished pianist-keyboardist, jazz musician, composer, recording artist, teacher and entrepreneur whose creative work represents the flexible and interdisciplinary thinking that all music students in the ASU School of Music aspire to develop.

“The Ravenscrofts have been wonderful contributors to our jazz program for many years,” Landes said. “Their support of the arts and jazz, in particular, in the Phoenix metropolitan area, has been unwavering. We are grateful to the Ravenscrofts for their incredible generosity and for this sustainable gift supporting musical innovation in the ASU School of Music.”