School of Human Evolution and Social Change experts push back against claim of 10,000-year-old massacre in East Africa

Archaeologists’ discovery of a brutal, 10,000-year-old massacre at Nataruk grabbed headlines around the globe this year. Their evidence that early humans engaged in warfare raised questions among scientists and popular media about violence, human nature and the currently accepted models of societal development. Perhaps, the world pondered, people have been warring longer than we thought.

Or perhaps, argue Arizona State University researchers, there was no massacre at all. 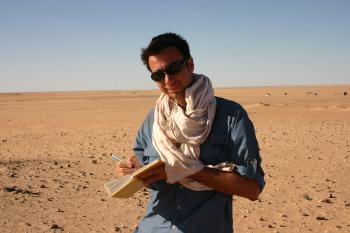 Nataruk, near Lake Turkana in Kenya, was the final resting place for at least 27 people. Archaeologists found skeletal remains in 2012 and determined that they were around 10,000 years old. Many of the skeletons were jumbled and showed signs of damage.

When researchers involved with a 2016 study of the site published a paper in Nature last January, they proposed that the people were victims of a massacre, citing as evidence the bodies’ unburied conditions and their injuries from projectile weapons and blunt-force trauma to the head.

Yet, 10,000 years ago, the people living around Nataruk were hunter-gatherers, and many anthropologists believe that humans didn’t engage in this systematic form of warfare until they started living in settlements. The reasoning is that if people moved around, they didn’t have to worry as much about defending their resources.

This apparent deviation from the norm and other lingering questions about the study’s claims prompted Christopher Stojanowski, a bioarchaeologist at ASU’s School of Human Evolution and Social Change, and several of his peers at the university to challenge the original analysis of the skeletons as the victims of warfare. The ASU group authored a reply — featured in Nature this November — that presents multiple findings rebuting the first paper.

On the claim of blunt-force trauma, Stojanowski’s team notes that the fracture patterns don’t match up forensically to those caused by a blow to the head. Were that the case, they would see fractures that radiated out in a circle from the point of impact or that followed along the weak areas of the skull. Instead, the Nataruk skulls have cracks in grid-like patterns or cracks that spread over the stronger, reinforced parts of the skull. The team suggests that these fractures happened after death as the skulls were compressed by soil over time, in an environment where they were sometimes underwater.

“My initial reaction to the article was, upon seeing the (Nataruk skull on the Nature magazine) cover and then reviewing the images in supplemental materials, ‘These “fractures” look just like the taphonomic changes that developed from ground pressure in the hundreds of skeletons that I’ve excavated,’” said Jane Buikstra, member of Stojanowski’s group and Regents’ Professor at SHESC.

The ASU team also argues that the layout of the skeletons within the site showed some organization and intentional positioning — something not done for the bodies of enemies. In addition, radiocarbon dating shows that the bodies found lying face-down were older than the bodies found lying on their sides, meaning that they died and were buried at different times. According to the researchers, this combined evidence suggests that Nataruk may instead be a cemetery site where mortuary traditions changed over time.

"It was the archaeological interpretation, and not the interpretation of trauma, that was initially perplexing," Stojanowski said. He gave an example from the first paper, which stated that the skeleton of a pregnant woman, found in a sitting position, had been bound and left unburied. "How would a bound, pregnant woman die in a seated position and become buried by sediments over time prior to decomposing or being eaten by animals?"

These findings have since prompted a brief reply from the original group of researchers, who assert that Stojanowski’s team is incorrect and that the evidence still points to a massacre. They argue that one of the skulls, which Stojanowski’s paper states was fractured from the weight of the soil surrounding it, has two clear points of impact with fractures that radiate outwards. They also contend that there is no connection between body position and age, and that the skeletal remains were mixed up and spread out without organization — negating the idea of a cemetery.

The ASU team, however, remains unconvinced.

“I really didn’t find any new information or convincing arguments [in their reply] that would cause us to change our minds,” Buikstra said. “However popular it has become to attribute violence to our human ancestors, this example is less than convincing.”

Whether there was ever a massacre at Nataruk, it’s clear that the site still holds mysteries for scientists. There is at least one skeleton, for instance, with an obsidian projectile embedded in the bone. Not to mention that, even if warfare didn’t exist at the time, murder was not unheard of. And if the people in the area were indeed roaming hunter-gatherers, why did they continue to return to the same spot to bury their dead?

While definite answers remain elusive for now, both teams' perspectives play a crucial part in capturing a more complete picture of the site — ensuring the Nataruk story is not one lost to the passage of time.

“This debate is a healthy part of the scientific process and, in the case of Nataruk, solvable as more data come to light from what is surely one of the most important finds of this age in East Africa,” Stojanowski said. “It would be a shame for the ‘warfare story’ to overshadow the tremendous opportunity to research the lives of East African hunter-gatherers from this understudied part of the world.”

The Confucius Institute at Arizona State University was honored as “2016 Confucius Institute of the Year” at the 11th Global Confucius Institute Conference earlier this month. ASU Vice Provost and Vice President for Academic Affairs Stefanie Lindquist accepted this award, which was presented by Vice Premier Liu Yandong of the People’s Republic of China in Kunming, China. "It was a privile...

ASU Vice Provost and Vice President for Academic Affairs Stefanie Lindquist accepted this award, which was presented by Vice Premier Liu Yandong of the People’s Republic of China in Kunming, China. 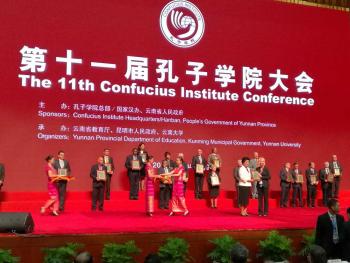 ASU Vice Provost and Vice President for Academic Affairs Stefanie Lindquist accepts the 2016 Confucius Institute of the Year Award, which was presented by Vice Premier Liu Yandong of the People’s Republic of China in Kunming, China. Download Full Image

"It was a privilege for me to participate in the award ceremony on behalf of our dedicated faculty and staff at ASU's Confucius Institute,” Lindquist said. “The award is a tribute to their energetic and visionary leadership and to the outstanding teamwork of the Institute's faculty and staff."

To promote Chinese learning in local schools, the Confucius Institute has worked since 2009 to establish dedicated “Confucius Classroom” partnerships with 14 elementary and secondary schools in five school districts in Arizona. To date, the ASU Confucius Institute is proud to have more than 4,000 students studying Chinese in these schools.

Through these schools, the ASU Confucius Institute is able to develop an overarching, integrated Chinese curriculum and learning system based on Arizona K-12 academic standards. The ultimate goal is to ensure students will be linguistically and culturally prepared to handle the complex demands of a global society.

The institute also keeps a close tie with the Consulate General of the People’s Republic of China L.A. In September this year, the renowned China National Orchestra of China National Opera & Dance Drama Theater was invited to present a special cultural performance at ASU’s Tempe campus co-hosted by the consulate.

Founded in 2007, the ASU Confucius Institute has maintained a partnership among ASU, Sichuan University, and the Confucius Institute Headquarters (Hanban) in China. The ASU institute has a broad mission to promote scholarship about China and foster high-quality Chinese language and cultural education within schools and the community at large.

Watch a video about ASU Confucius Institute below: