How higher education and personal initiative resulted in a proactive new policy of support, prevention

There’s a new public health movement called the Fast-Track Cities Initiative that promises to improve access to testing, medication and other resources for those affected by HIV/AIDS in the Phoenix area.

It’s backed by a host of prestigious organizations, including the Joint United Nations Programme on HIV/AIDS and the International Association for Providers of AIDS Care. 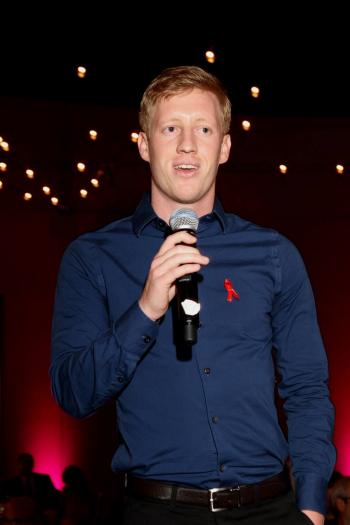 Hunter Workman, an alumnus from the ASU School of Human Evolution and Social Change, helped pass the initiative in Phoenix.

Workman graduated from Arizona State University with honors in May 2016, holding concurrent degrees in global health and biochemistry. He now works for HEAL International, a nonprofit organization that provides health and empowerment education in Arizona and Tanzania.

Workman’s involvement with HIV organizations and the Fast-Track Cities Initiative began when he was a student.

He said he first learned about the HIV/AIDS epidemic when he took a class with School of Life Sciences faculty associate Damien Salamone titled “HIV/AIDS: Science/Behavior/Society.” The class had a big impact on Workman, and he recommends it to others.

“After taking the class, I developed a passion for serving people who are infected or affected by HIV by volunteering with HIV organizations in Arizona and India,” Workman said.

Time spent with other organizations, including the International Alliance for the Prevention of AIDS, took Workman all the way to India, where he helped provide AIDS education for the community of Chennai.

However, he knew there were still issues to address closer to home. According to the Arizona Department of Health Services, there were nearly 1,100 Phoenix residents who didn’t know they had HIV in 2015. Statewide, over 40 percent of people living with HIV don’t receive medical care or take medications.

Knowledge of these local issues, combined with yet another influential ASU course — “Global Health Policy,” taught by associate professor Monica Gaughan of the School of Human Evolution and Social Change — prompted Workman to combat the issue from a political angle. The course opened his eyes to the link between policy and public health.

“After working with HIV organizations for a few years, and taking that class, I recognized how getting Phoenix to commit to the FTCI would affect policy that would dramatically improve how we fight HIV/AIDS and stigma in Arizona,” he said.

“Hunter is a student who exemplifies ASU's aspirations to transform society by leveraging our place, being socially embedded and engaging globally,” Gaughan said. “He applied what he learned in the classroom about policy analysis and advocacy to a local problem.”

Workman’s first step was putting on a forum-style event with his colleague, Kohi Gill, at ASU’s Tempe campus. They called it “HIV in Your World: Local and Global Perspectives” and invited community leaders to speak or participate in the discussion. These leaders included former Tempe Mayor and former CEO of the San Francisco AIDS Foundation Neil Giuliano as well as Dr. Benjamin Young, the chief medical officer for the International Association of Providers of AIDS Care.

Young gave a presentation at the event on a new, progressive initiative by his association to end the HIV/AIDS epidemic through the participation of cities — the FTCI. During the presentation, Workman was fortuitously seated next to Giuliano.

“I asked him for his perspective on bringing the FTCI to Phoenix, and he insisted that this was the next step to ending the HIV/AIDS epidemic, eliminating HIV stigma and caring for those infected with HIV,” Workman says. “I then committed to speaking with community leaders.”

By leveraging his existing volunteer connections to HIV health organizations, and with the encouragement of Gaughan, Workman developed an honors project proposal for Phoenix to commit to the FTCI.

He presented this proposal to a group of community leaders, which led to conversations about how they could bring the initiative to Phoenix. Many of the Valley’s larger HIV organizations became involved, and they eventually formed a committee. This committee then reached out to the mayor of Phoenix, and they worked together to pass the FTCI.

By providing Arizona with its greatest-ever collective effort to champion the health and rights of those affected by HIV, Workman hopes the effort will inspire other cities to also take part in the years ahead.

Over the next five years, beginning in 2017, the plan will:

“Overall, I am excited to see how the FTCI will bring care to all of those infected with HIV,” he said. “The FTCI will make history in Arizona and around the world.”

When good leaders leave viable companies for new and better opportunities, they might walk out the door with more than best wishes and the last slices of farewell cake.Some subordinates, concerned enough to re-examine their own careers, might follow the leader to his or her new venture. Others, uncertain of whether they will like the replacement, also might plan their exits.How can companies preve... 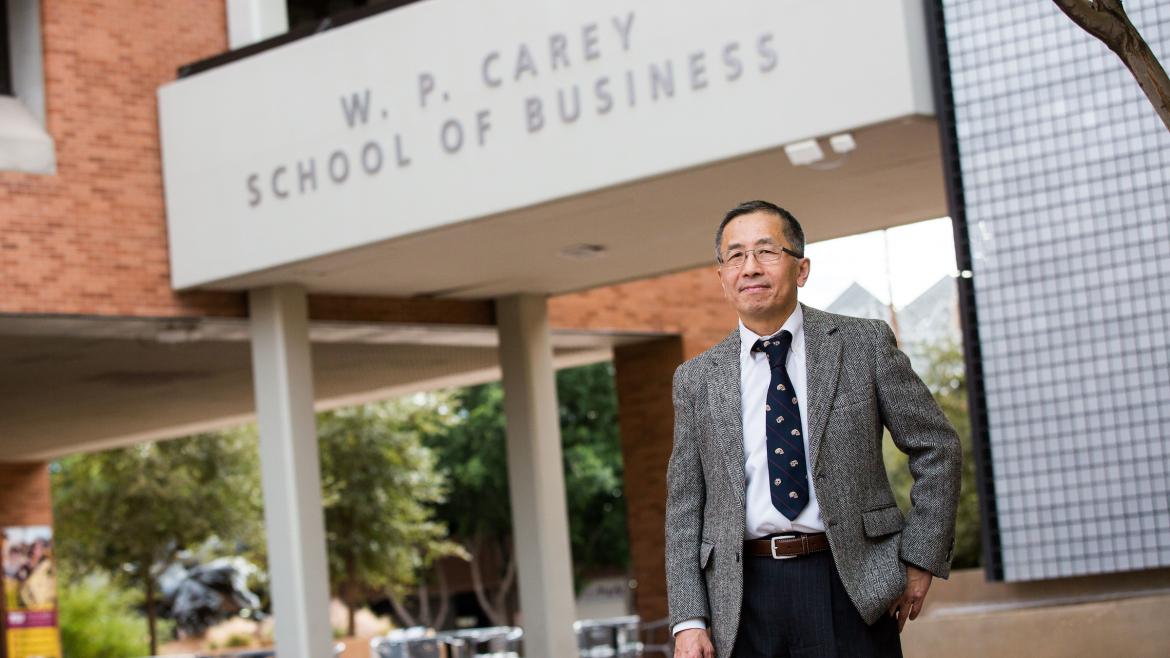 When good leaders leave viable companies for new and better opportunities, they might walk out the door with more than best wishes and the last slices of farewell cake.

How can companies prevent one leader’s departure from turning into a full-fledged flight?

New research by Peter Hom and Wei Shen, both professors of management at the W. P. Carey School of Business at Arizona State University, suggests that companies with strong organizational-development climates create strong relationships among the subordinates, their peers, lower-level employees and other leaders. Such 360-degree relationships encourage subordinates to keep their current jobs, according to the paper, which was published in the Academy of Management Review.

“By ignoring these other kinds of relationships, you’re ignoring factors that might counteract or moderate that leader departure effect,” said Hom (pictured above). Employees who don’t follow a leader out, he said, might well identify themselves with the company or have formed strong attachments to co-workers who do so.

Some leader departures are legendary in the business world. Andy Grove following Gordon Moore from Fairchild Semiconductor to start what would become Intel Corp. is one famous example. Departures also have spawned new buzzwords, such as “turnover contagion” and “lift-outs” to describe the exit of entire teams for new opportunities.

Early research on turnover assumed that employees leave for personal reasons, Hom said, such as being unhappy or having needs that they think another company will better meet. More recently, researchers have turned their attention to how external forces, including the depth of relationships with co-workers, might affect employees’ decisions to stay or leave.

“In the knowledge economy — the service economy — the greater focus is on the kinds of relationships you have with people (at work), which stabilize you,” Hom said. At the same time, researchers are paying attention to employees who defect when colleagues with whom they have relationships leave.

If a departing leader’s relationship with team members was of poor quality, the effect on turnover can be minimal, as employees expect they will like the successor better. But in high-quality relationships, employees identify with their leaders, view them as agents of the company and tend to feel a greater sense of loss and disruption.

Hom, Shen and their colleaguesAuthors on the paper were University of Maryland management professors Debra Shapiro and Rajshree Agarwal. examined how a leader’s departure weakens employee attachment to companies. They suggest that these departures cause employees to become uncertain about their future and begin appraising their situations. Employees also become concerned that the next leader might distribute resources differently than the predecessor did.

“The leaving itself is a shocking event that makes them question what their fate might be like without the leader,” Hom said. “It creates a lot of doubt and uncertainty, so they judge the pros and cons of leaving.”

To account for the whole spectrum of relationship quality, Hom’s team suggests a 360-degree relational model that incorporates all three types of relationships underpinning employees’ attachment to their companies.

The greater the size of employees’ networks, the research finds, the more the employees will identify with their companies and not just with their leaders. The size of workers’ networks, in turn, depends on the strength of the company’s organization-wide development climate.

The team suggests that companies start addressing the turnover issue by assessing their development climate. They should uncover how employees perceive the mentoring that occurs and identify the extent to which the company expects, supports and rewards mentoring among leaders and employees.

Companies should recognize that employees and mentors prize their relationships, so it helps to give employees access to mentors who are willing to lead in all directions: peer, virtual, senior and subordinates. Organization-wide procedures, such as incentives for mentoring others at different levels, can support more mentoring. Hom notes that many companies already have developed mentoring relationships for minority and female employees and could broaden those programs to include more employees.

Creating employee networks and a development climate can reinforce employees’ attachment to the company or organization, the researchers say. A strong network and supportive climate would help reduce thoughts of quitting, turnover contagion and lift-outs.

Hom next hopes to test the team’s propositions with data from a large organization so he can examine more closely how leader departures trigger turnover, especially among good employees.