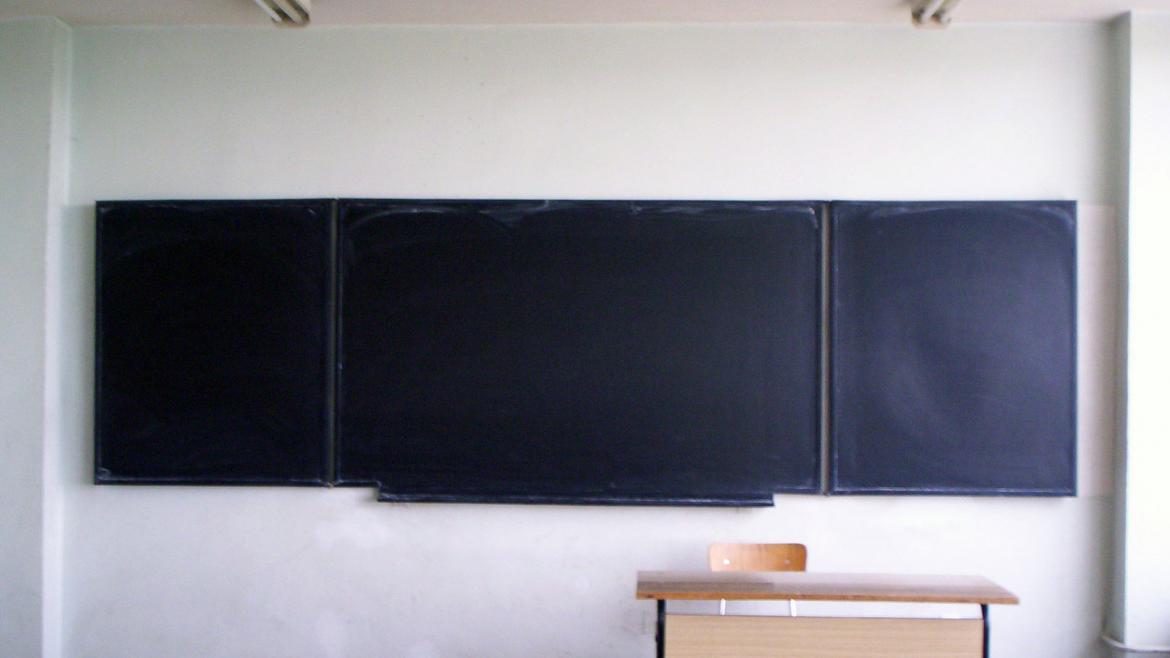 Physical environment has effect on perceptions of rules and consequences, which links to bullying and misbehavior

Researchers have known for some time that certain environmental factors in a neighborhood — adequate lighting, access to green space, safe crosswalks — can affect the happiness of its residents. There’s even a tool to measure it.

In a study funded by the U.S. Department of Education and the William T. Grant Foundation, Arizona State University assistant professor Sarah Lindstrom Johnson and colleagues found that some of the same metrics used to determine how to make neighborhoods better places to live in can be applied to schools, to make them better places to learn.

Their findings were recently published in the paper “Assessing the Association Between Observed School Disorganization and School Violence: Implications for School Climate Interventions” in the journal Psychology of Violence. 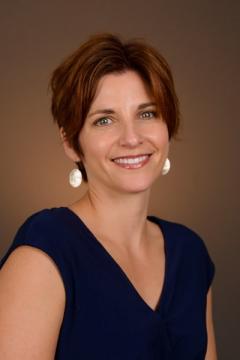 “There’s a large body of research about how neighborhood environments influence behavior and perception,” said Lindstrom Johnson, part of the faculty in ASU’s T. Denny Sanford School of Social and Family Dynamics. “Those kind of sociological theories have influenced zoning laws, police intervention and have even been written about in books like 'The Tipping Point' ... but they’ve rarely been applied to school settings.”

A former Baltimore City high school teacher, Lindstrom Johnson has a background in adolescent development and a doctorate in public health. Her goal with this project was to figure out a “sustainable intervention” for schools to improve their climate, of which one important piece is the physical climate.

“A novel aspect of this project was to understand to what extent observations of the school environment aligned with students’ and teachers’ perceptions of the school,” Lindstrom Johnson wrote in an article for Atlas of Science. To do this, they created a new tool, the School Assessment for Environmental Typology, or SAfETy.

What they found was that although a school’s physical environment had no direct effect on students’ likelihood to engage in violence, there were significant indirect effects through students’ perceptions of rules and consequences and physical disorder. For example, in schools where observers reported bad lighting and student misbehavior, students perceived the school as having lower levels of order, which was in turn associated with involvement in violence including bullying, fighting and weapon carrying.

What this shows, Lindstrom Johnson said, is that “students’ perceptions of an environment are critically important.”

She added that the study’s findings provide added emphasis to an abundance of research over the past decade that adult supervision and interaction with students supports academic outcomes and reduces the likelihood of involvement in violence and drugs, and such relationships are especially important in school environments where perceptions of order and rule following are low.

A new study is under way to explore whether these same trends are observed in middle schools. A modification of SAfETy has been created to allow school administrators to measure the environment of their own schools. The hope is to coach them on how to better understand key features of the physical environment that may be influencing student and staff behaviors and perceptions.

“If you can make changes in school environments, you’re making institutional changes,” Lindstrom Johnson said. “And that can sometimes be more feasible than trying to change every individual.”

Top photo courtesy freeimages.com. The Sanford School is an academic unit of the College of Liberal Arts and Sciences.

Editor’s note: This is part of a series of profiles for fall 2016 commencement. See more graduates here.Many students at ASU are involved in research, even as undergraduates. But how many students have worked on research projects with six different professors and hope to have four manuscripts published before entering grad school? Shane Lubold is one of those students. He is the Dean’s Medal...

Many students at ASU are involved in research, even as undergraduates. But how many students have worked on research projects with six different professors and hope to have four manuscripts published before entering grad school? Shane Lubold is one of those students. He is the Dean’s Medalist for the School of Mathematical and Statistical Sciences and is graduating with a degree in mathematics and a minor in French. 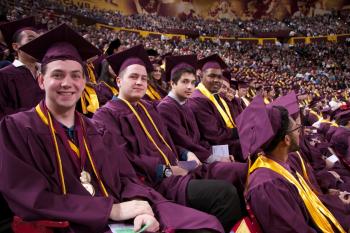 Shane Lubold (left), the Dean’s Medalist for the School of Mathematical and Statistical Sciences, and other newly minted graduates at the College of Liberal Arts and Sciences Convocation on Tuesday. Photos by Rhonda Olson/ASU Download Full Image

Lubold, who is from Los Angeles, is a National Merit Scholar and chose ASU because of Barrett, the Honors College. His honors thesis project focused on Fourier analysis and statistics.

“We proposed a statistical algorithm which combines multiple sets of data in order to better detect ‘jumps.’ For instance, in the context of magnetic resonance imaging (MRI), a ‘jump’ could be a mass or some irregularity in the body that doctors are interested in seeing and analyzing. The algorithm takes the data, which are inherently corrupted by noise and error, and reduces the contribution of this noise and error, allowing doctors to more accurately analyze the mass,” Lubold explained.

Lubold was also named a Bidstrup fellow and awarded a $2,000 grant to work with assistant professor Sebastien Motsch on Wasserstein Distance and Brownian motion. Their paper is called "Agent-Based Models of Tumor: Comparison Between Micro and Macro Dynamics.”

This summer, he worked on another research project with assistant professor Jorge Carlos Roman at San Diego State University. Their first paper, which Lubold co-authored, is “Non-asymptotic Bounds on the Root Mean Square Error in Gibbs Sampler Algorithms." They hope to have a second paper published on this topic by end of spring. 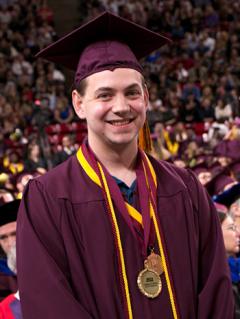 Lubold wants to continue doctoral studies in statistics or applied math. He has applied to the Fulbright program to study in Europe, and to numerous top doctorate programs. After earning his doctorate, he would like to pursue an academic career — researching, teaching and mentoring students.

“Shane has one of the highest cumulative grade-point averages among the graduating majors in any of the school's undergraduate degree programs. He earned this by succeeding in a number of the most challenging highest-level classes in our program,” said Matthias Kawski, President’s Professor in the School of Mathematical and Statistical Sciences.

Lubold, who is receiving the Undergraduate Award for Excellence in French, answered some questions about his experience at ASU.

Question: What was your “aha” moment, when you realized you wanted to study math?

Answer: My "aha" moment was during Dr. Thieme's MAT 300 class. I realized I really enjoyed the logic and rigor of the class, and knew then that I wanted to continue studying math. I enjoyed the level of abstraction of the class.

Q: What advice would you give to high school students interested in possibly majoring in math?

A: My advice to high schoolers is to know that college-level math is very different from high-school-level math. There is more emphasis on logic, proofs, and justifying why and how math works.

Q: What do you think is misunderstood about math by the general public?

A: The general misunderstanding the public has about math is that it only involves numbers. Most classes I've taken focus on proofs, and so they tend to involve few (if any) numbers.

Q: What’s something you learned while at ASU that surprised you, that changed your perspective?

A: One of my favorite topics that continues to amaze me is the idea of size, or cardinality, of sets. There are many "types" of infinity, and these ideas play a crucial role in many proofs in modern mathematics. It really changed my perspective since the conclusions we can draw from these "types" of infinity can be counterintuitive.

Q: What’s the best piece of advice you’d give to those still in college?

A: Pursue whatever you are interested in. Find something you are passionate about, and you will enjoy spending time doing it.

A: I chose ASU because of Barrett's honors program. I really enjoyed the Human Event [an intensive, interdisciplinary seminar required of all lower-level Barrett students] and feel that it provided me with a wide array of authors, ideas and books that I continue to explore to this day. Taking honors courses and completing honors projects gave me the chance to connect with professors and explore extra topics.

A: On campus I can be found at the MU Starbucks, where I can work on homework, meet friends or just read a book. The atmosphere is very conducive to working.

Q: When not studying, what do you like to do for fun?

A: I like to play tennis, watch Netflix and travel.

A: With $40 million I would be interested in helping to resolve some of the issues we have in our educational system. Education is a critical component of a person's success, and by providing everyone with a quality education we can set people up on the path to success.