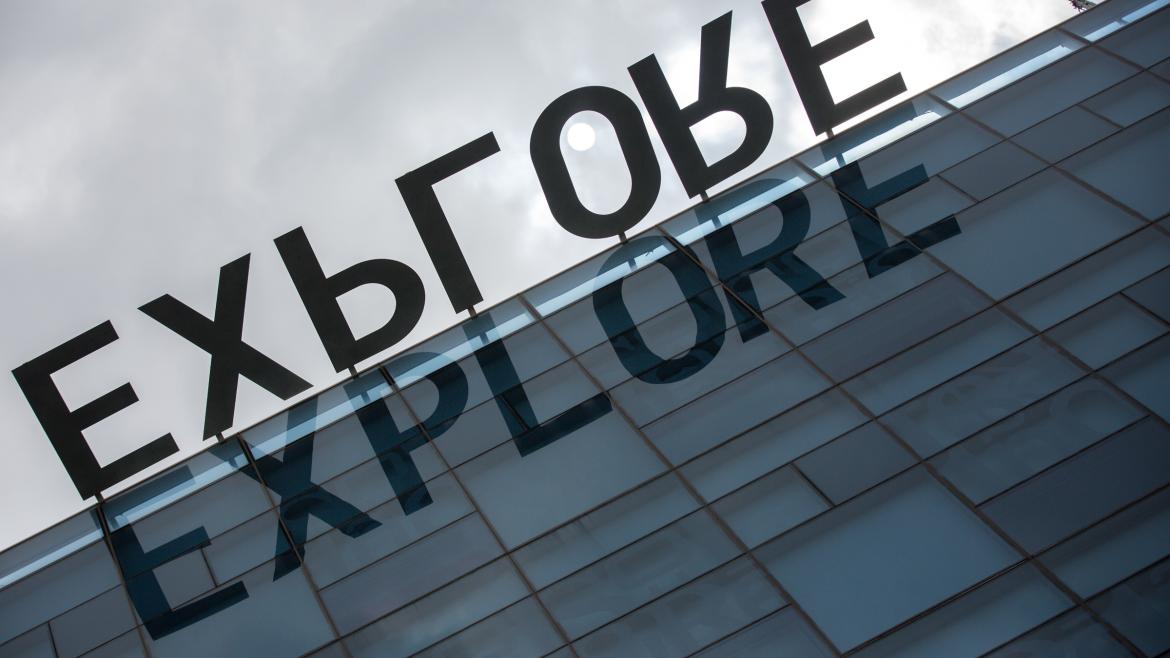 Washington, D.C.
From the sciences to the humanities, ASU researchers' impact continues to grow.
December 12, 2016

We can all rest easier knowing what keeps Carolyn Forbes up at night.

The assistant director of ASU’s Center for the Study of Religion and Conflict stays on top of how extremists are leveraging communication tools and facets of religion to further their agendas. She worries about whether we can create visual maps of extremist discourse to help figure out if there will be an attack. And she studies new ways to keep track of how Muslim communities around the world are talking about extremism.

“ASU and the Center for the Study of Religion and Conflict were perfectly positioned to address these big questions because we had the ability to bring together an interdisciplinary team of computer scientists, sociologists, historians and anthropologists,” Forbes said.

All of this is part of a series of research projects funded through the Department of Defense’s Minerva Initiative. That provided funding for ASU to create a tool called Looking Glass that aggregates information from social media platforms, organizes it and displays it as an interactive graph.

Forbes and her colleagues aren’t alone in focusing on important, potentially world-changing research. The university has landed on the National Science Foundation’s top 10 list for research expenditures in the United States for universities without a medical school, alongside the likes of the Massachusetts Institute of Technology and the University of California at Berkley. ASU also has the largest university research portfolio in the state of Arizona when medical school spending is not factored in — the first year that has been the case.

“The work that ASU’s researchers are doing is changing the world at an incredibly fast rate,” said ASU President Michael M. Crow. “From the sciences to the humanities, from NASA research and Department of Defense funding, the impact this university can make on the state, country and world will continue to increase.”

Forbes works with Hasan Davulcu, a computer scientist in the Ira A. Fulton Schools of Engineering, and Mark Woodward, an associate professor of religion studies, on a research relating to the Minerva Initiative. Today ASU is ranked fifth in the U.S. for social science research, alongside Harvard University, and fifth in the U.S. for political science research expenditures, alongside Princeton University.

Edward Kavazanjian is the director of the Center for Biomediated and Bioinspired Geotechnics, housed in the Ira A. Fulton Schools of Engineering. The center’s researchers examine natural systems that can provide answers to complicated problems engineers face around the world.

“In 3.8 billion years of trial and error — some people call this evolution — nature has come up with pretty good solutions,” Kavazanjian said. “We want to learn from nature and employ natural and biological processes, or mimic them in a biological manner, to mitigate hazards, such as earthquakes or landslides, for environmental protection and restoration.”

Kavazanjian’s center is an NSF Engineering Research Center. The NSF’s centers are located at universities across the United States, and ASU is one of only two universities in the country with two ERCs. ASU’s other ERC is the Center for Quantum Energy and Sustainable Solar Technologies, which focuses on advancing photovoltaic science, technology and education to sustainably transform electricity generation.

About 2.5 billion years ago, the level of oxygen in Earth’s atmosphere began to rise. Rising oxygen levels, combined with changes in the Earth’s interior and surface, created an environment friendly to the evolution of intelligent life. Ariel Anbar, a President’s Professor in ASU’s School of Earth and Space Exploration, is leading an interdisciplinary team of researchers who hope to find out why.

With NSF funding, Anbar and his team are working to understand why the oxygen in Earth’s atmosphere rose when it did. Answering such a complex question required assembling a team of geoscientists who focus on the mechanics and science of Earth’s interior and Earth’s surface, including Christy Till, geologist and SESE associate professor. It also required the expertise of ASU associate professor of English Mark Hannah.

“It’s important to look at language and communication broadly and the ways communication can impact a team’s research,” Hannah said. “Linguists often come into science research after the fact, after data has been collected. On this project we’ve been able to frame our research question with focused language. We’ve also been able to think about assumptions that reside in our work, and we can surface those assumptions to work around them and move forward.”

ASU is ranked fourth in the United States for expenditures related to interdisciplinary science, along with Harvard, UC-Berkeley and Johns Hopkins University.

“The ASU research enterprise’s unprecedented growth rate is a testament to the outstanding ideas put forth by our faculty in highly competitive venues and achieving success. It also reflects our commitment to supporting our world-class faculty who are engaged in solving global challenges by seamlessly working across disciplines,” said Sethuraman Panchanathan, executive vice president of Knowledge Enterprise Development and chief research and innovation officer at ASU. “Innovation and collaboration are a core value in ASU’s culture. Our goal is to continue to excel and grow as well as train future generations of researchers who approach solutions with an interdisciplinary mind-set resulting in societal impact.”

For Forbes of Looking Glass, it all adds up to a research environment unlike any other.

“This paradigm of the New American University, of thinking across disciplinary lines about the big challenges of our time, has allowed research to be done at ASU that couldn’t be done anywhere else,” Forbes said.

Discoveries Washington, D.C. Research Technology Science Center for the Study of Religion and Conflict The College of Liberal Arts and Sciences Ira A. Fulton Schools of Engineering School of Earth and Space Exploration Department of English Faculty Staff Media Friend/Fan

Before they even graduate, students at Arizona State University's Ira A. Fulton Schools of Engineering already have hands-on experience solving real-world industry challenges.As part of their senior-year capstones and eProjects, students in the Polytechnic School, one of the six Fulton Schools work with industry partners to design and create solutions to real problems posed by the partner compani...

Before they even graduate, students at Arizona State University's Ira A. Fulton Schools of Engineering already have hands-on experience solving real-world industry challenges.

As part of their senior-year capstones and eProjects, students in the Polytechnic School, one of the six Fulton Schools work with industry partners to design and create solutions to real problems posed by the partner companies. These students then present their work at the Innovation Showcase, an exhibit that takes place at the end of each semester at the ASU Polytechnic campus. 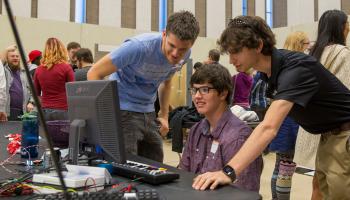 “As usual, I was both encouraged and thrilled to see the range of topics the students at the ASU Innovation Showcase demonstrated,” said Sailesh Athreya, Advanced Technology Strategy at Honeywell Aerospace, who coordinates the company’s involvement with ASU capstone programs. “From drone traffic management to Hyperloop to carbon sequestering, the projects showed a keen sense of social responsibility, innovation and practical application of technology.”

Students are paired with industry partners, who provide a challenge along with a set of constraints and criteria, from which the student teams brainstorm ideas, pitch them to the company and develop their idea into a working prototype. This year, 27 industry partners participated in the engineering eProject capstone activities, supporting more than 450 students working on 128 projects.

Manufacturing engineering senior Stephanie Bryan and her team worked with Starkey Hearing Technologies for their year-long eProject to help integrate additive manufacturing into their advanced hearing aid manufacturing process. Starkey wanted to understand how to apply customized 3D printing methods for their hearing aids, versus the standard injection molding methods.

“The main goal of our task was to find a way to embed a tiny little circuit board into a hearing-aid-shaped, 3-D-printed enclosure and have the circuit be fully functional,” Bryan said.

At the Fall 2016 Innovation Showcase, the Starkey student team presented the successful outcome of their 3-D-printed hearing aid device. To get there, they altered the 3-D printer firmware, developed the engineering process to build the shells and load the electronics and created a detailed operations manual.

Parker Feldmann, also a manufacturing engineering senior, presented his eProject at the Innovation Showcase last semester. He and his team worked with Nammo Talley from Mesa, Arizona, to replace human visual inspection of high performance ammunition with machine vision systems in a high-volume production environment. He and his team were tasked with designing the concept, prototyping a system and understanding the system cost.

“The entire time it was designing the concept, talking to the company to make sure it’s what they wanted and then edit and rinse and repeat until they're happy with the design for you to build it and prove that it works,” Feldmann said.

Working with changing criteria and in a diverse team were often big challenges, Feldmann says, but it prepared them for the workforce.

For Bryan, it was an informative experience working directly with industry partners.

“It’s been enlightening to see the expectations of the industry partner, what they’re looking for and live up to industry standards instead of a professor’s standards in a classroom environment,” Bryans said. “There’s also a lot more autonomy. Our professors give some guidance, but for the most part it’s really up to you and your team to meet the final goals of your industry partner.” 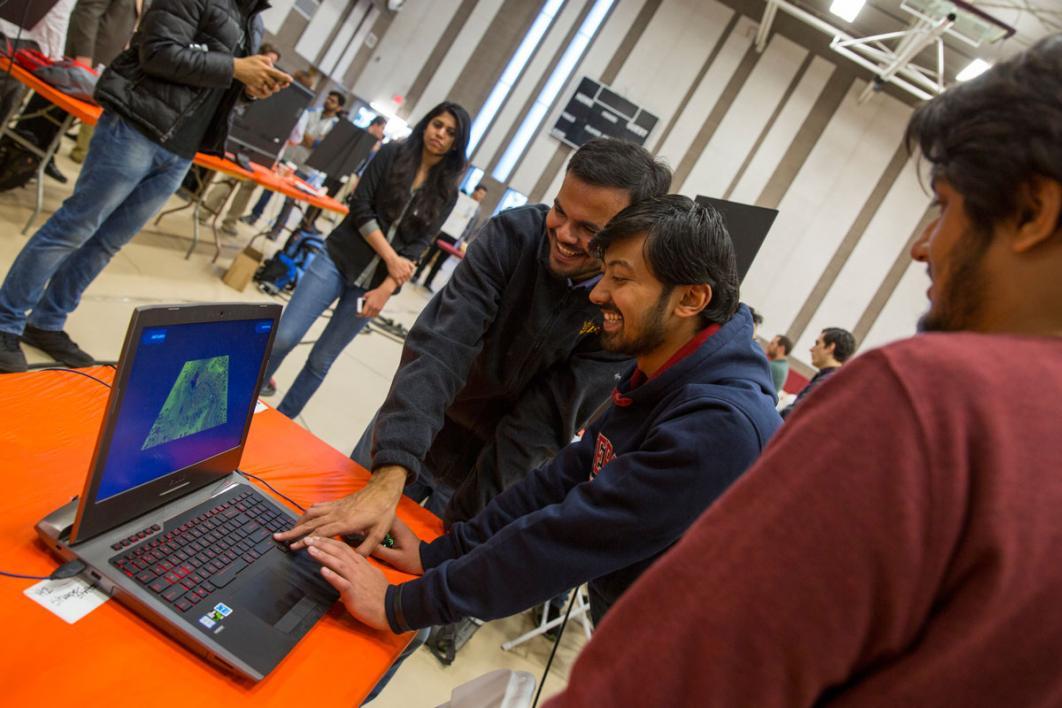 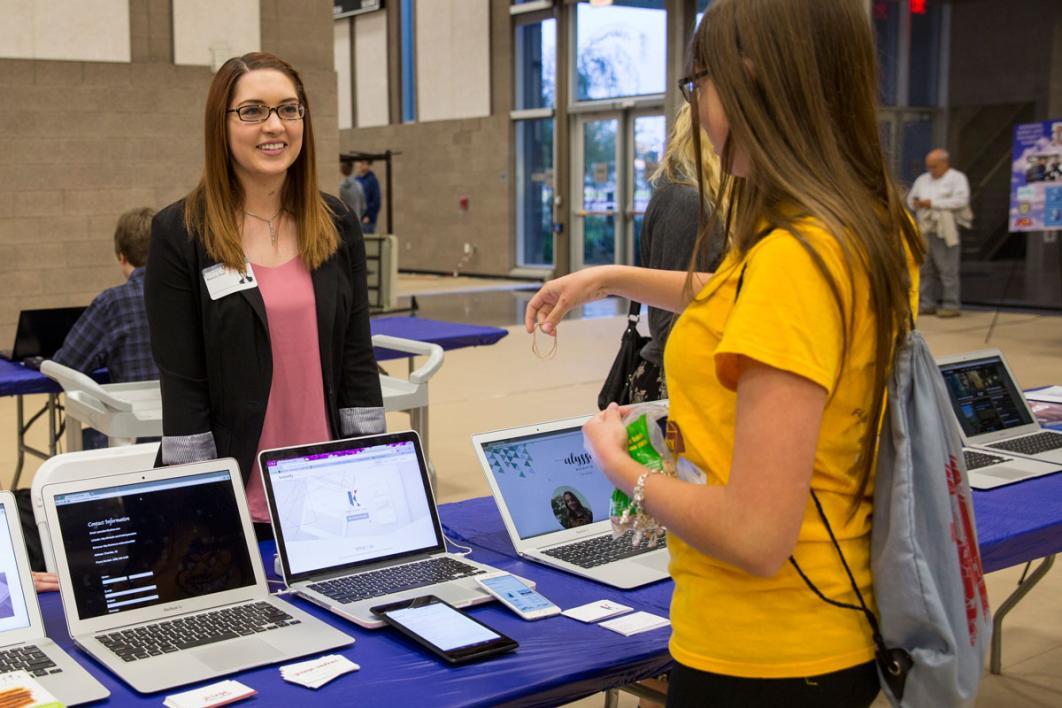 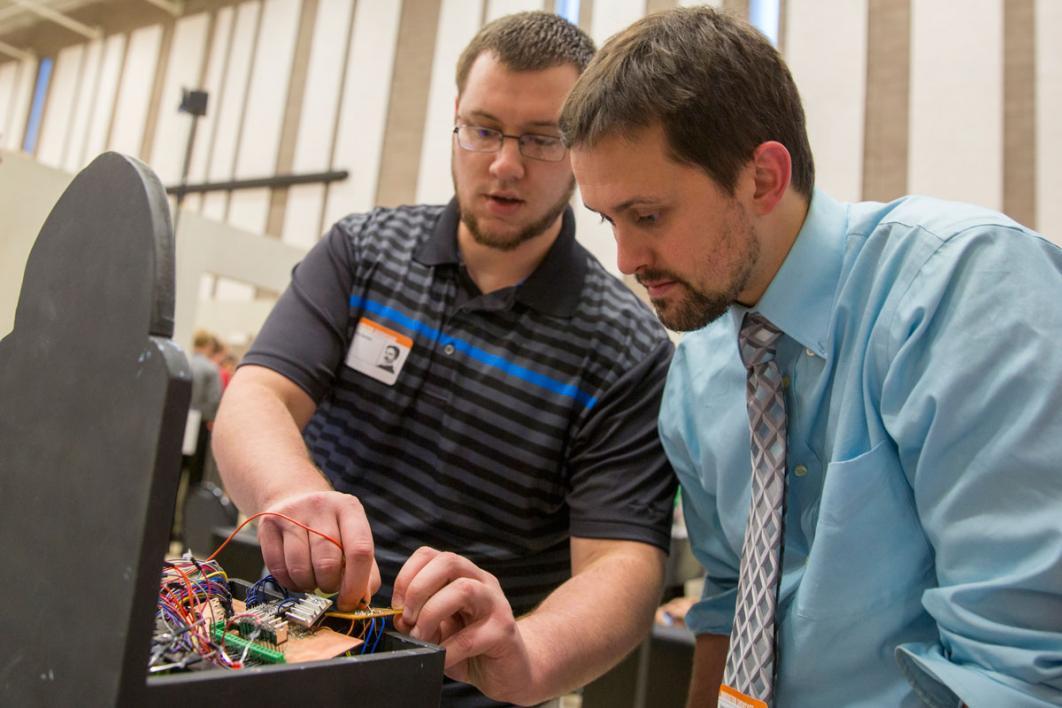 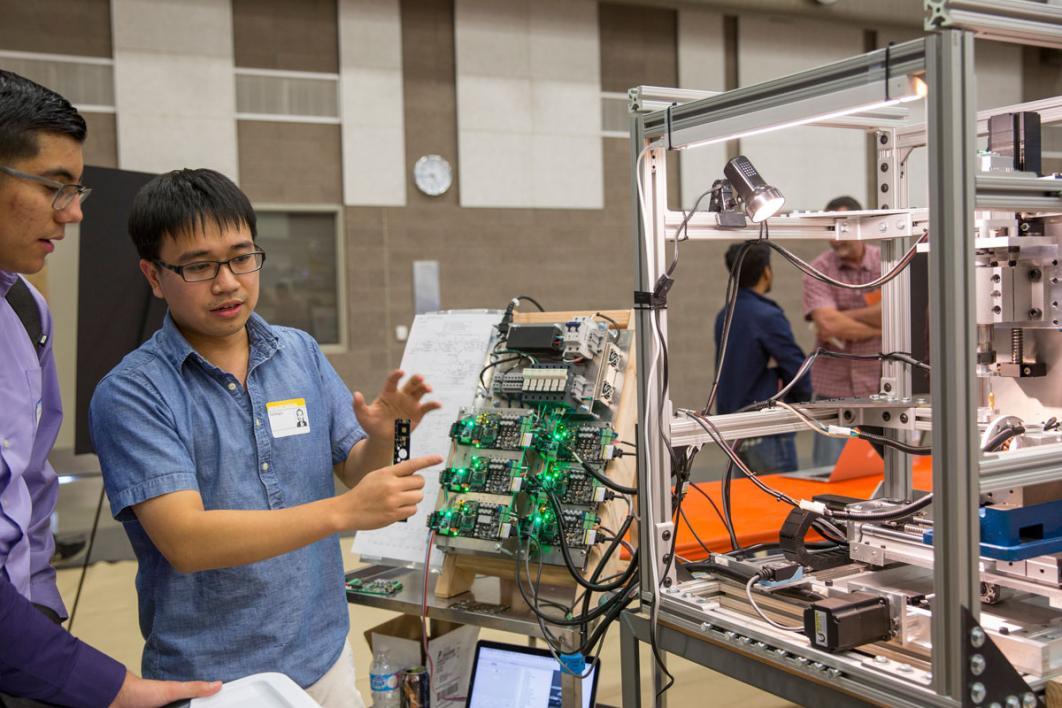 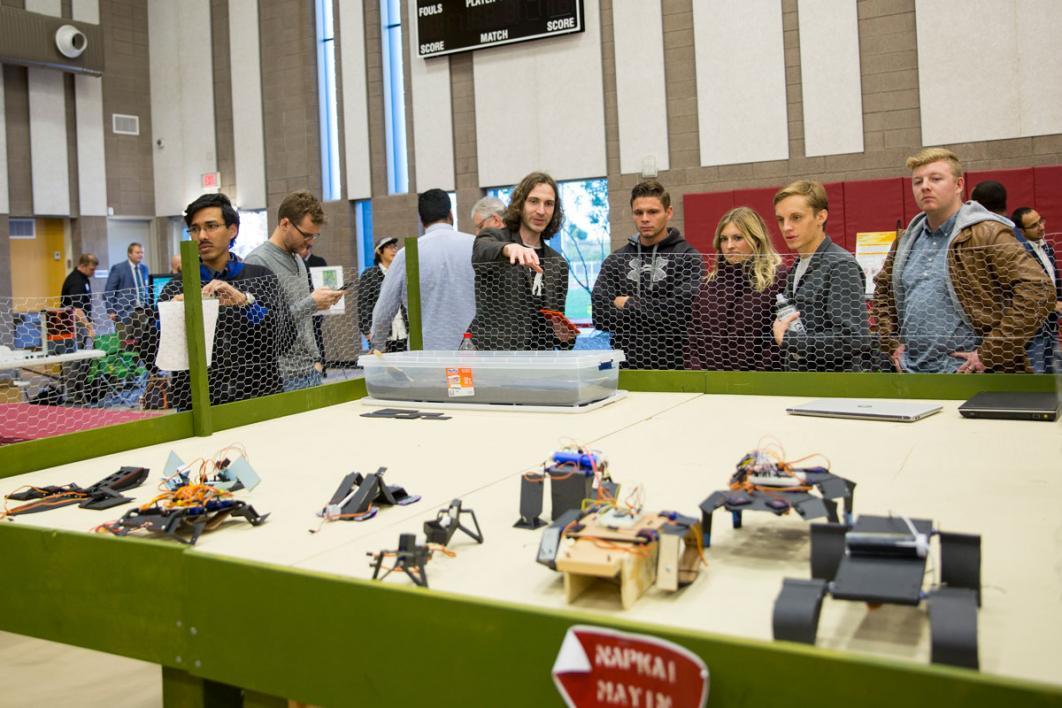 These projects are mutually beneficial for students and industry participants alike.

Bob Rasmussen, director of technology strategy and advanced technology at Honeywell Aerospace, says it gives his company the opportunity to bring real-world problems to students.

“We understand that having real-world problems to solve brings a whole new understanding to students,” said Rasmussen, who is also responsible for establishing and funding the partnerships at the Polytechnic School. “Students learn how to think and speak on their feet, and the value of interdisciplinary skills and teams.”

“It’s a great return on investment in leadership time with our mentors,” Rasmussen said. “They get energized by the students and their creativity and excitement for engineering.”

That creativity can also earn students industry jobs after they graduate.

“We hire students out of almost every project we sponsor,” Rasmussen said. “It’s a great way to recruit talent.”

The program attracts industry partners from far beyond the Phoenix metropolitan area. Starkey Hearing Technologies, for example, is located in Minnesota. Project partners have come from Canada, Massachusetts, Texas, New Mexico, Michigan and all over Arizona, with small and large companies participating. Each year the U.S. Air Force provides a challenging eProject competition as well.

This is not the only time students work like professionals, and that is what students like Bryan and Feldmann enjoyed about their program.

“All of the project-based courses closely mimic what industry does,” Bryan said. “We follow the engineering process, starting with the concept, then apply the iterative process with a team that has different specialties and skills, and figure out what it takes to meet our end goals.”

Both Bryan and Feldmann are going on to industry jobs after they graduate this December — Bryan at a local systems integrator in Chandler, Arizona, and Feldmann at the Tesla Gigafactory outside of Sparks, Nevada.

They appreciate how their programs have set them apart and prepared them for their futures.

“Being at the Polytechnic School provides a unique opportunity to work with an industry partner and have a project-based learning course every semester,” Bryan said.. “It sets students here apart. We have lots of hands-on experience and exposure to industry and I know that a lot of companies are clamoring to hire the students here.”