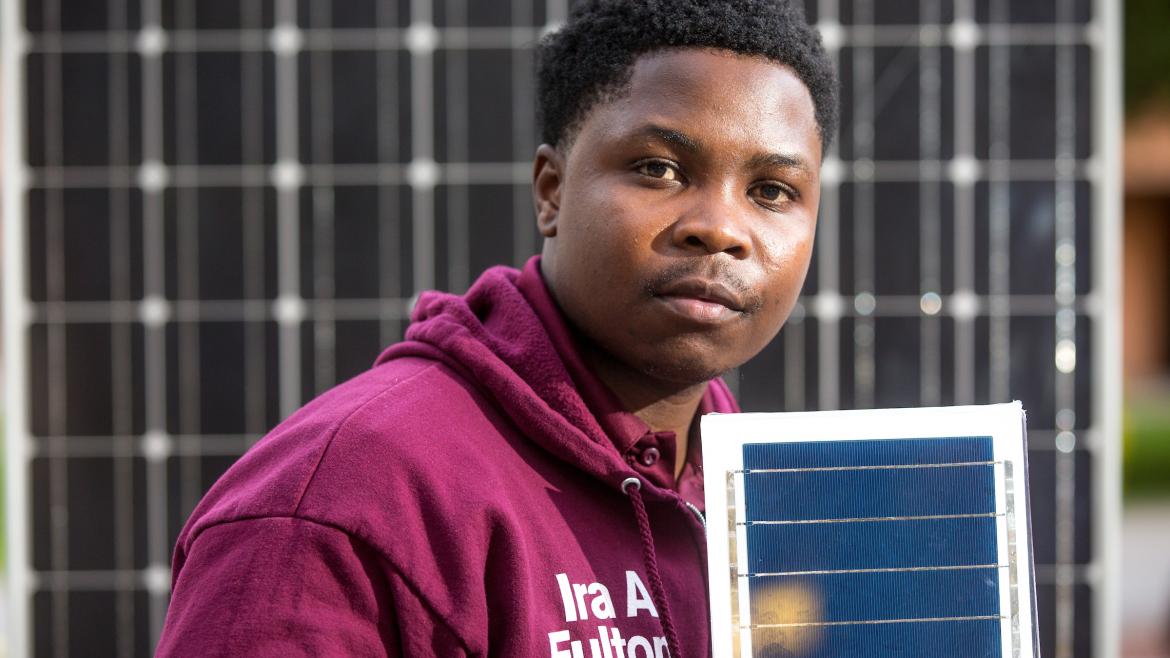 When Ngoni Mugwisi was growing up in central Zimbabwe, the end of the day sometimes meant the end of his studies.

“Having consistent power cuts meant I could not study beyond the light of day, or I had to use candles for lighting,” said Mugwisi, an electrical engineering major and MasterCard Foundation Scholar at Arizona State University.

Mugwisi is on a mission to bring power to his southern Africa home. And — armed with a newly awarded Rhodes Scholarship to study at Oxford next year — he is well-positioned to accomplish his goal.

The Rhodes Scholarship is the oldest and perhaps most prestigious international graduate scholarship program in the world. It was established in 1903 by empire builder John Cecil Rhodes.

Each year two Zimbabwean Rhodes Scholars are selected on the basis of their intellect, character, leadership and commitment to service to join 81 other Rhodes Scholars from around the world at the University of Oxford.

Mugwisi is from Gweru, a provincial capitol in central Zimbabwe. His father worked for Zimbabwe Alloys, and his mother is a home maker. His siblings still study by candlelight.

“Growing up in Zimbabwe, like many students, I faced this challenge of power cuts,” Mugwisi said. “So what happens in Zimbabwe and many parts of Africa, every day the electricity is cut off. That is because of many problems with the generation and distribution of power. I was always inspired to solve that problem. A degree in electrical engineering would enable me to do that.”

Zimbabwe’s power grid suffers from a web of challenges, as Mugwisi called it, between aging infrastructure, a lack of investment and a lack of expertise.

“It was a huge hindrance for my education and for my life, in general,” he said. “I got to think about the broader implications. It wasn’t only my education that was being affected. Sectors such as health, manufacturing. It’s a huge problem that goes beyond the individual.”

Mugwisi will graduate in May 2017. In the fall he will begin studying for a master’s degree in engineering science. After Oxford, he would like to develop his skills by working in a professional environment at an energy company using renewables in Europe or the U.S.

After honing his skills, he plans to earn either a master’s degree in business administration or public policy.

Then it’s back to Zimbabwe to help build the nation with other committed young professionals.

“I would like to join the team of young people who are really passionate about developing Zimbabwe,” he said. “The challenge in Zimbabwe right now is there aren’t many opportunities where people can develop their skills. I do think as things change in the long-term, economically and politically, we’ll see a lot more young people go back to Zimbabwe. I see that happening for myself in the near future.”

Mugwisi said the transdisciplinary hallmark of ASU was inspiring.

“This opportunity to cross between disciplines, whether in engineering, entrepeneurship, and all the collaboration efforts I’ve found here at ASU, they’ve been really inspiring,” he said. “It’s an enabling environment to be the best anyone can do. ... It means I can do things I really like, and there isn’t a lot of limitations. I found it to be pretty flexible and pretty diverse in the opportunities to put your hand in many cookie jars and take advantage of that.”

When Mugwisi arrived at ASU, he dove right in, starting a student organization with other African students called Africa Rises to promote African culture and dispel myths about the continent. He actively leads on the region 6 board of the National Society of Black Engineers.

And he founded Solar Water Solutions, an initiative extracting ground water for wells using solar energy. In the summer of 2015, he went back home to build a well with a water wheel using solar panels to pump water. Most community wells in Zimbabwe are powered by hand.

“It was an opportunity to apply my passion for renewable energy systems,” he said. “Those things I would never have imagined for myself coming here as a freshmen in 2013. But ASU made that possible by creating an enabling environment where one can pretty much pursue their interests. ... It’s been a really good experience learning here at ASU, especially in the engineering school. I say that because I have had opportunities to apply myself beyond the classroom, and I’ve had the opportunity to interact with teachers and professors who are really passionate about seeing me develop.”

Top photo: Electrical engineering senior Ngoni Muwisi, from Zimbabwe, has earned a Rhodes Scholarship and will begin his Master's in Engineering Science at the University of Oxford next fall. Muwisi is studying solar energy and is working on his honor's thesis on the "Balance of System Cost Analysis of Tandem Solar Cells." Photo by Charlie Leight/ASU Now.

Ngoni Mugwisi recalls the dry, 110-degree heat that welcomed him to Arizona — and the United States — for the first time.This sweltering introduction marked the beginning of a four-year journey that has seen the Arizona State University electrical engineering student achieve success in academics, leadership, social entrepreneurship and impact on the ASU community.It is the continuation of a lo...

Ngoni Mugwisi recalls the dry, 110-degree heat that welcomed him to Arizona — and the United States — for the first time.

This sweltering introduction marked the beginning of a four-year journey that has seen the Arizona State University electrical engineering student achieve success in academics, leadership, social entrepreneurship and impact on the ASU community. 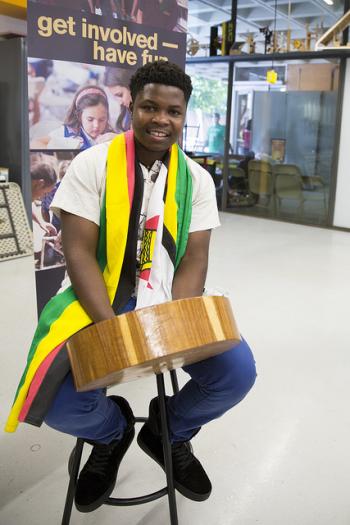 Ngoni Mugwisi played an instrument from his native country of Zimbabwe for visitors at the Ira A. Fulton Schools of Engineering Homecoming Block Party. Photo by Jessica Hochreiter/ASU Download Full Image

It is the continuation of a longer journey that began in Zimbabwe with a childhood marked by the sacrifice and perseverance demanded by life with his supportive but financially impoverished mother.

Overcoming challenges to excel in school

His upbringing in the city of Gweru, Zimbabwe, was punctuated by nearly monthly evictions from one house to another. Eventually, Mugwisi’s mother and siblings were forced to relocate to rural Mberengwa, Zimbabwe, where living costs are lower.

Mugwisi, however, remained with other family members in Gweru, where the education system was better. Though he was frequently excluded from school because he was unable to pay the required fees, Mugwisi still managed to excel by borrowing books and class notes from other students.

“Science always fascinated me, and I was curious to know what happened behind the scenes of everyday processes and beneath the surfaces of technologies,” Mugwisi said.

Motivated by his curiosity and those interests, he earned the highest-ever test results on the national exams at his high school, leading to a Joshua Nkomo Scholarship, one of the most competitive scholarships in Zimbabwe.

As a senior, Mugwisi earned perfect test scores in the natural sciences and graduated a term early. His performance made him one of 32 Zimbabwean students to be selected for the 2012 class of the United States Students Achievers Program, which helps African students to apply to U.S. universities.

ASU’s commitment to the ideals of the New American University appealed to Mugwisi, particularly its emphasis on local impact, social embeddedness and accessibility for students from all walks of life. He was also attracted to ASU because of the academic, entrepreneurial and leadership opportunities it offered.

“At ASU I knew I would find a nurturing climate that would propel me to succeed as an entrepreneur,” Mugwisi said.

He made his way to ASU with a full-ride scholarship from the MasterCard Foundation Scholars Program — a $500 million, 10-year initiative to educate and prepare young people, particularly from Africa, to lead social change and make a positive impact on their communities.

The commonplace hunger Mugwisi experienced as a child living in poverty has evolved into a passion for improving communities through social entrepreneurship.

As a freshman in ASU's Ira A. Fulton Schools of Engineering, he started the Stair Gardens Project, a sustainable food-source venture that uses a tiered gardening system to empower small-scale rural farmers to increase their food production. The venture was started in conjunction with the Fulton Schools’ Engineering Projects and Community Service (EPICS) program.

The system enables people in rural areas, including many areas across Africa, to sustainably grow vegetables despite limited access to water and fertile soil. The tiered agricultural approach saves land space while increasing the output of vegetable harvests, despite using only small plots of land.

The Stair Gardens Project (SGP) won against 191 other ventures competing at the 2015 Social Venture Challenge, held in conjunction with the Clinton Global Initiative University (CGI U) conference at the University of Miami in March 2015.

“With the seed funding we earned we transformed SGP into a spinoff venture called Solar Water Solutions and successfully implemented the first phase of the product design in Zimbabwe in summer 2015,” Mugwisi said.

Mugwisi’s determination and commitment to serving others earned him three EPICS awards in two years, including the Global Impact Award for the Stair Gardens Project venture.

After his team’s performance at CGI U, Mugwisi won a Resolution Fellowship, which is given to young social entrepreneurs by the Resolution Project to help connect them with an array of resources for support through the nonprofit’s network. The Resolution Project aims to generate leaders with a lifelong commitment to social responsibility.

Mugwisi is co-founder of two ASU student organizations, Diners We Care, a food waste reduction and diversion initiative, and Africa Rises, which provides African students with a platform for self-representation and for correcting stereotypes about themselves and their countries.

He also serves as the Region 6 Programs chairperson for the National Society of Black Engineers. Mugwisi develops and implements programs to promote academic excellence, education outreach and pre-collegiate engagement for the society in 11 states. He is also a mentor to fellow students in the School of Electrical, Computer and Energy Engineering, and chair of the ASU chapter of the Institute of Electrical and Electronics Engineers.

Music connects him to home and to others

He enjoys playing the mbira, a traditional African musical instrument also known as the thumb piano. He recently performed at the Fulton Schools’ ASU homecoming block party and at a reception at the Zuva Gallery in Scottsdale.

“It is my own serene way of balancing my busy life. I am glad a number of people I have played for share the same love for the music,” he said.

Mugwisi is on track to graduate in May 2017 and plans to attend graduate school.

“I plan to continue living at the intersection of my passions,” he said, “and I will follow my path wherever it leads.”