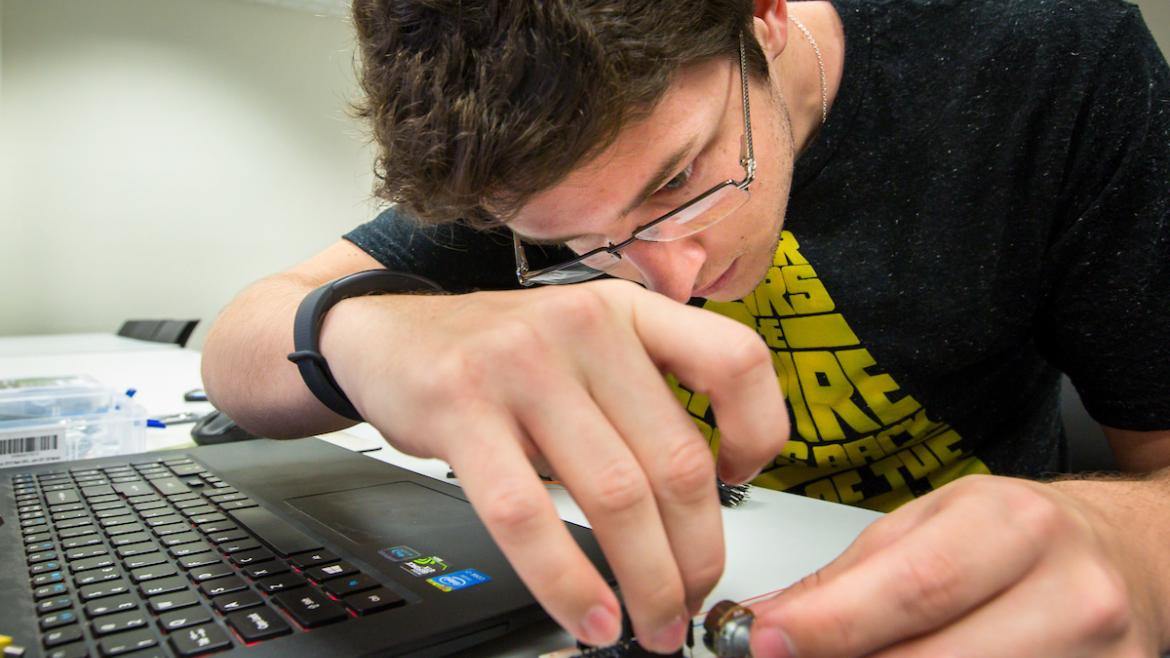 If science has its way, your refrigerator will be able to sense if milk is missing and send a signal to your smartphone, which will then remind you to fetch a gallon from the grocery store.

It’s a concept called the Internet of Things, and it’s much closer than you might think.

By 2020, it’s estimated that more than 50 billion devices will be connected to the Internet, revolutionizing consumer habits, the way we conduct business and how we chose to connect with the world.

In Tempe, a cutting-edge class dedicated to figuring this all out is drawing to a close. It’s the first section of its kind at ASU and one of only about two dozen across the nation.

It’s so new that “the overreaching goals of a class like this haven’t really come to pass yet,” said Chandler Berry, a 21-year-old, senior informatics major. “It’s a very current and useful class.”

Computer scientist Tejaswi Gowda, who teaches AME 394The class is taught through the School of Arts, Media and Engineering in the Herberger Institute For Design and the Arts Programming the Internet of Things, says the class emphasizes that the future’s already here and there’s nothing to fear.

“Life will be easier and more efficient through automation,” Gowda said. “The positives are many.”

According to Gowda, the Internet of Things was first coined in 2013 and is a $3 trillion market-in-the-making. It basically means everyday objects will have connectivity through wired and wireless connections working mainly on sensors and actuators, becoming a type of information system without human intervention.

The benefits could mean improved medical outcomes; smarter energy consumption; better traffic-flow optimization; fixing problems before they become catastrophes and shopping at the touch of a button.

The trick is, it’s all got to work and hopefully benefit mankind. And that’s where the nine ASU students taking the class come into play. They’ve collectively decided it’s their future, and they get to design it.

“This could be done through a smartphone rather than go and see a doctor and explain their symptoms or go through a battery of tests,” Murella said. “The smartphone could send all the data to their heath practitioner in real time.” 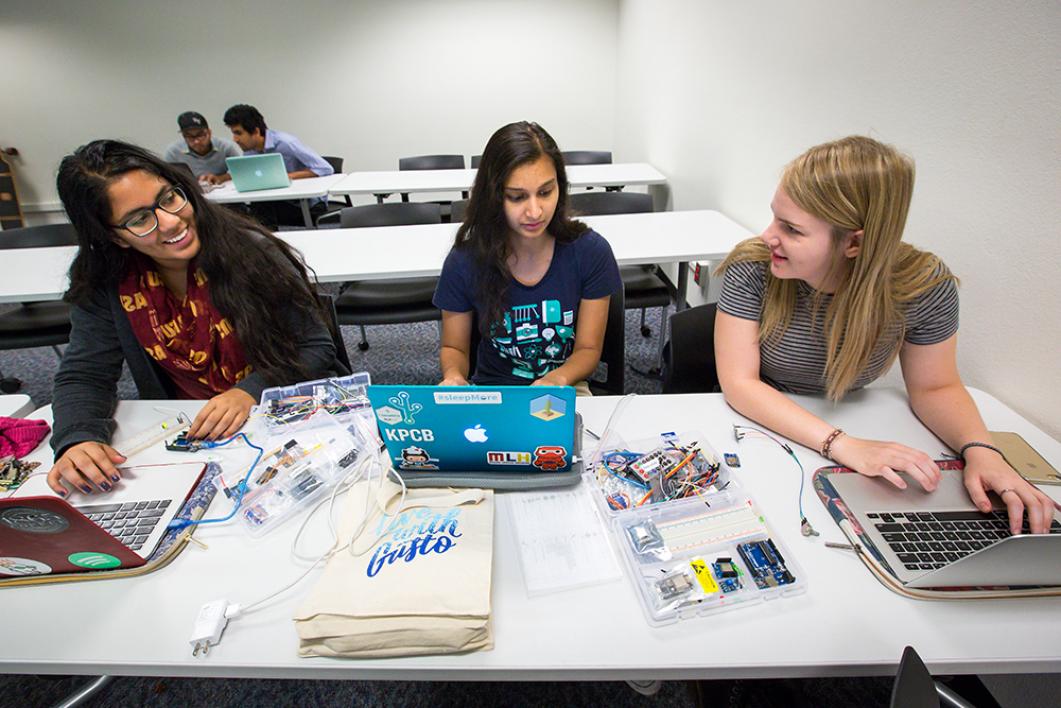 Akhila Murella (left) Anisha Gupta and Michaela Foote (right) chat while they each assemble a circuit board that will be controlled by coding on the computer, relayed through Wi-Fi, in a special topics class, in Stauffer Hall, on Wednesday, Nov. 23. Murella and Gupta are juniors in computer science, and Foot is a digital culture junior. Computer science junior Akhila Murella assembles a circuit board that will be controlled by coding on the computer, relayed through Wi-Fi. She is also working, through the Fulton Undergrad Resource Initiative, on a biosensor that can detect infectious diseases, using similar technology. Faculty member Tejaswi Gowda works with informatics senior Harry Chang on coding as he assembles a circuit board that will be controlled by coding on the computer, relayed through Wi-Fi. Gowda is leading the class into practical applications for the Internet of Things, which allows objects to have network connectivity, allowing them to send and receive data.

Anisha Gupta, a 20-year-old computer science major, said she wants to use her skills to help change the world and was inspired by a hackathon team using a network of sensors to notify authorities when bridges in India were close to collapsing.

“Technology can be used for people who have lost hope, especially for those who are older and don’t understand its power,” said Gupta, who is working with classmate Michaela Foote on a Google Open Source project called Paco, which monitors health and nutrition.

There are drawbacks to these advancements in this technology, chiefly security and job replacement. The more reliant we become on technology, the more risk there is for hackers Gowda said.

“Most everything will be connected through the Internet, which means people will try and disrupt your system or steal your data,” Gowda said. “Each device has to be built with security in mind and follow industry standards, best practices and cryptography.”

Automation also has its critics, who worry about skilled labor being replaced in mass numbers. Berry, the informatics major, said the advancements indicate a shifting economy. He also said he sees an upside.

“Yes, those jobs might go away, but new jobs would be created,” he said. “They would be specialized and require more education, but we’re not there yet. We’re still catching up.”

Digital culture major Foote said we are on the cusp of a technological revolution and life as we know it is about to change and improve.

“It’s a very cool world we live in,” Foote said.

Mosques across California received letters threatening genocide against Muslims this week, and although authorities say they didn’t rise to the level of hate crimes, ASU associate professor Patrick Bixby said they represent the latest example of Islamophobia in the U.S.Anti-Muslim bias has been one of many topics in the news around which ASU associate professor Christopher Hanlon says there’s ... Mosques across California received letters threatening genocide against Muslims this week, and although authorities say they didn’t rise to the level of hate crimes, ASU associate professor Patrick Bixby said they represent the latest example of Islamophobia in the U.S.

Anti-Muslim bias has been one of many topics in the news around which ASU associate professor Christopher Hanlon says there’s much misinformation — so he has organized an event to do something about it, leveraging the expertise of campus experts on religious freedom, immigration, climate change, abortion, women’s rights and the Dakota Access Pipeline.

Hanlon’s “teach-in” starts at 11 a.m. Thursday on Fletcher Lawn at the West campus. It will feature presentations from associate professor of English Patrick Bixby and other faculty from ASU's New College of Interdisciplinary Arts and Sciences. The event is free and open to the public, and Hanlon hopes “students take away a renewed sense of curiosity about what is real and what is not real, and a heightened sense that not all the information circulating in the public sphere right now is authoritative and reliable.”

“And I also hope they take away a sense of agency, a sense that as citizens, we’re obliged to engage and inform ourselves so that we can help to steer our society in the right direction,” said Hanlon, an associate professor of English.

Here’s a sneak peek at what some of the professors will have to say about:

Although the term “Islamophobia” emerged in the early 20th century, Bixby said there is a long history of Muslim bias in Western culture, going all the way back to the Crusades.

More recently such bias could be seen in presidential campaigns that called for a ban on Muslim immigration to the U.S., as well as a register of all current Muslim U.S. citizens, he said.

Bixby, who studies post-colonialism, said that since the election, the Council on American-Islamic Relations has seen a spike in crimes against Muslims.

“I want students to consider the topic with some historical context in mind,” said Bixby, “so that they can be better informed when considering their civic activities over the next four years.”

This past election cycle, fake news stories were all over Facebook, Twitter and other social media outlets.

Many pundits said the spread of misinformation played the biggest role in determining the outcome of the election. Halavais said that’s “probably hyperbole,” but fake news is definitely prevalent.

There are three reasons people need to be wary of fake news, Halavais said:

If he could ensure students graduated with one skill, he said, “it’d be the ability to determine when information is real and when it’s fake.”

In the aftermath of the Supreme Court’s decision to legalize same-sex marriage, some more conservative groups have been pushing for bills at both the state and federal level that would allow individuals who object to marriage equality based on religious grounds the right to not comply with the law.

The Arizona Senate Bill 1062 that was first introduced in 2014 was just such a bill, said Tuomas Manninen, senior lecturer of philosophy. It was ultimately vetoed, but it would have given businesses the right to claim a religious objection to providing services to customers.

“Looking at it in a more philosophic way, I would say we need to strike a balance between individual liberties and equalities for all,” Manninen said. “We need to ask if certain bills would really create equality or if they would grant privileges to one group whose interests don’t support another’s.”

“As of 2012, the latest comprehensive info we have on abortion rates in the U.S. is that they’re the lowest they’ve ever been since abortion became legal,” said associate professor of philosophy Bertha Manninen, citing information from the Guttmacher Institute. “And 91.4 percent of abortions take place in the first trimester.”

So the idea that abortion, and specifically late-term abortions, are an epidemic in America is just wrong, she said, adding that abortion in general is a topic “that can be more mired with misinformation.”

Manninen will also be talking about what would need to happen in order for certain laws to be overturned.

“There’s a process, and there are steps that need to be taken,” she said. “You can’t just sign a piece of paper and overturn a Supreme Court decision.”