Hayden Library, which sits at the center of ASU’s Tempe campus, is the most visited library facility at Arizona State University, receiving more than 1.5 million visitors each year.

Still, the space and resources at Hayden are severely underused, according to university librarian Jim O’Donnell. 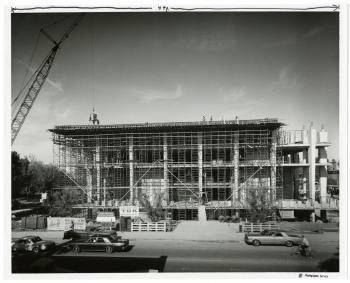 “I tend to think of Hayden Library as a stealth museum, with its underground entrance and many of its extraordinary treasures tucked away, hidden from public view,” O’Donnell said.

Some of those hidden gems include an original illustrated version of “Alice in Wonderland” by Salvador Dalí, the earliest music ever recorded in Arizona (by a cowgirl musician named Billie Maxwell) and the collected papers of Native American writer and poet Simon Ortiz.

“Students come here all the time, but they aren’t aware of everything we’ve got, and so their relationship to the library becomes mostly digital,” O’Donnell said. “Even if we can’t live without digital, there’s more to life than what’s online.”

On the heels of its 50th anniversary, Hayden Library is preparing to undergo a major renovation, with construction expected to begin in late 2017, in an effort to make Hayden more accessible and engaging and its resources more visible and user-friendly.

Plans to remake Hayden are largely informed by O’Donnell’s vision of what a library of the future should be: “a place that is as inspiring as it is welcoming, both an incubator of creativity and a monument to human complexity.”

It’s a vision well suited to the mission and goals of the New American University, O’Donnell said, which prioritize access, knowledge discovery and community embeddedness.

“In making Hayden more distinctive and usable, more community-based, we are opening the door to greater opportunities for access, excellence and innovation,” O’Donnell said.

Plans to redesign Hayden include adding multiple points of access, with greater indoor-outdoor connection; dedicating space for community gatherings; breaking the library up into thematic neighborhoods to better facilitate navigation and research discovery; and removing 1 million books from Hayden’s shelves to maximize space for students to study, work and interact, as well as to spotlight exhibits and collections.

"A library should be a place that is as inspiring as it is welcoming, both an incubator of creativity and a monument to human complexity.”
–  Jim O'Donnell, university librarian

While many books will remain at Hayden, those that leave will be permanently stationed at Noble Library or at the Polytechnic campus in a high-density storage facility, where they will be available for fast-turnaround delivery.

“We’re being strategic about our physical books. The ones that are housed in open facilities will be carefully chosen to inspire, challenge and support our best work,” said O’Donnell, “but all of our books will be readily available to all of our users, wherever they may be.”

(For more information about the removal of books, see Hayden Renovation FAQs). 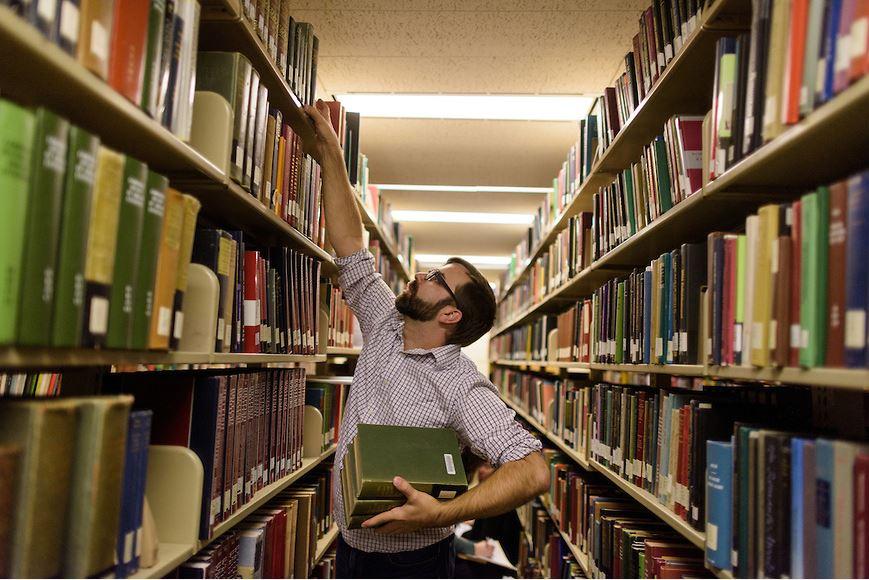 While many books will remain on Hayden’s shelves, those that leave will be permanently stationed at Noble Library or at the Polytechnic campus, where they will be available for fast-turnaround delivery.

Further plans to complement the building renovation and modernize the library’s services include developing a network of makerspaces, in which students and faculty can create everything from podcasts to 3-D printouts, and cultivating partnerships university-wide that leverage and enhance the library’s unique collections and data research centers, such as the new Map and Geospatial Hub.

“When finished, the new Hayden will be a combination of traditional library and high-tech workspace,” O’Donnell said. “It will be a dazzling showcase for the university — a place where you can find, interact with and explore all the riches we have to offer.”

Building a library of the future

In 1966, when Hayden Library first opened, the “riches” could easily be contained in Hayden’s 205,000 square feet of space. At that time, Arizona State University was not yet a decade old — its student population somewhere around 20,000.

Today, the university’s libraries contain approximately 4.5 million volumes, and ASU’s student population is more than four times what it was in 1966, including a growing segment of online students who may never step foot in an ASU library during their college career.

“The library is everywhere now,” O’Donnell said. “Our mission as librarians is to meet students and faculty wherever they are and get them whatever they need, quickly and efficiently, with as few restrictions as possible.”

The Hayden renovation, expected to be complete in the fall of 2019, is part of a larger university-wide effort to transform ASU’s nine libraries as a whole into a cohesive service operation that will meet the knowledge needs of students, researchers and the community well into this century. 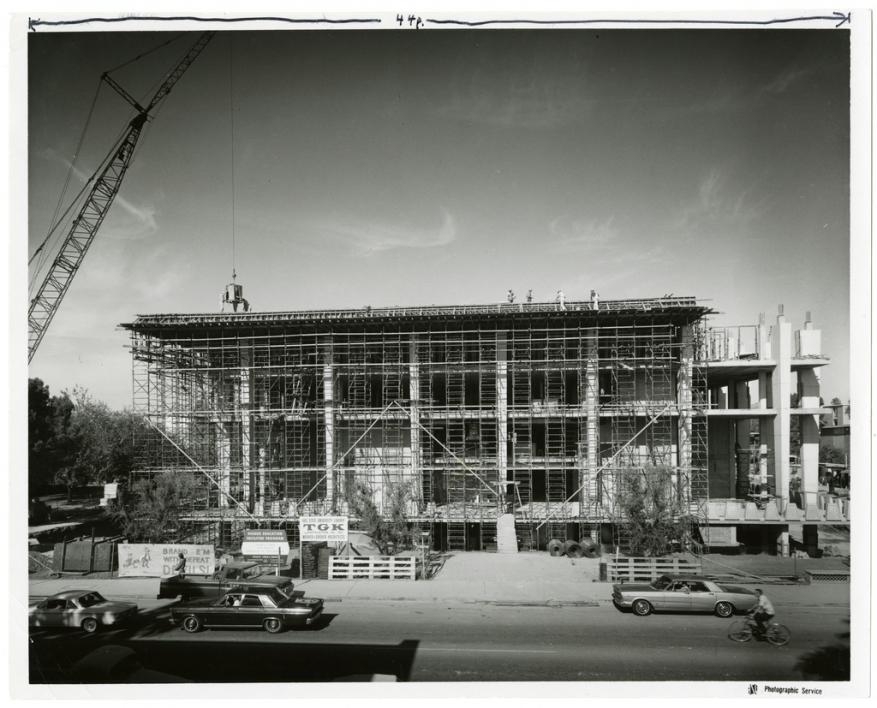 In the early 1960s, the architectural firm of Frederick Weaver and Richard Drover finalized plans for the Hayden Library five-story tower building, seen here in 1965 during construction. 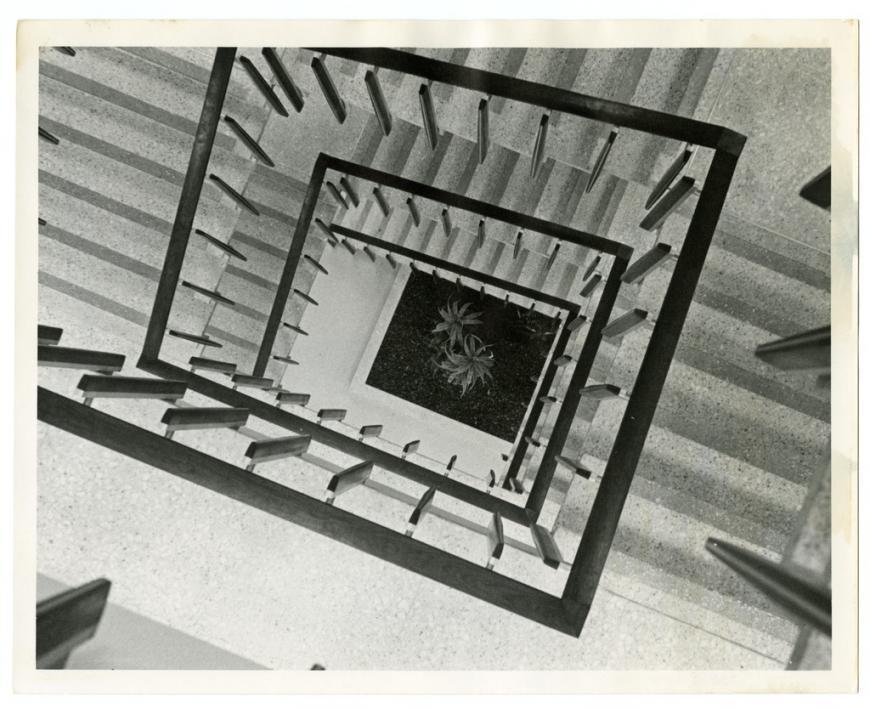 One problem facing the architects was limited space, as a high-rise design was not in keeping with the other surrounding campus buildings that were no higher than three levels. 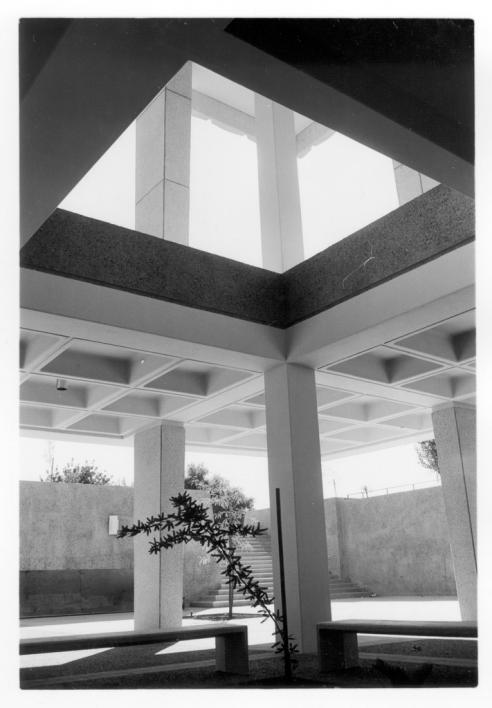 The solution was to put one story of the tower below mall level. Because no one wanted a basement, the architects adopted a similar design used in Gammage Auditorium and added a dry moat, finished as a landscaped walkway that surrounded the building on all sides. 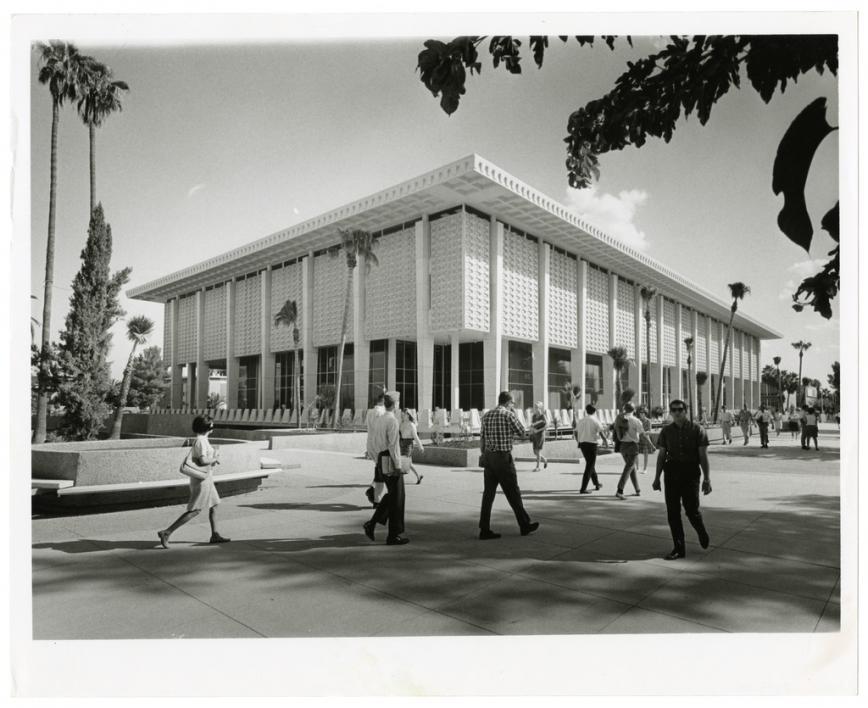 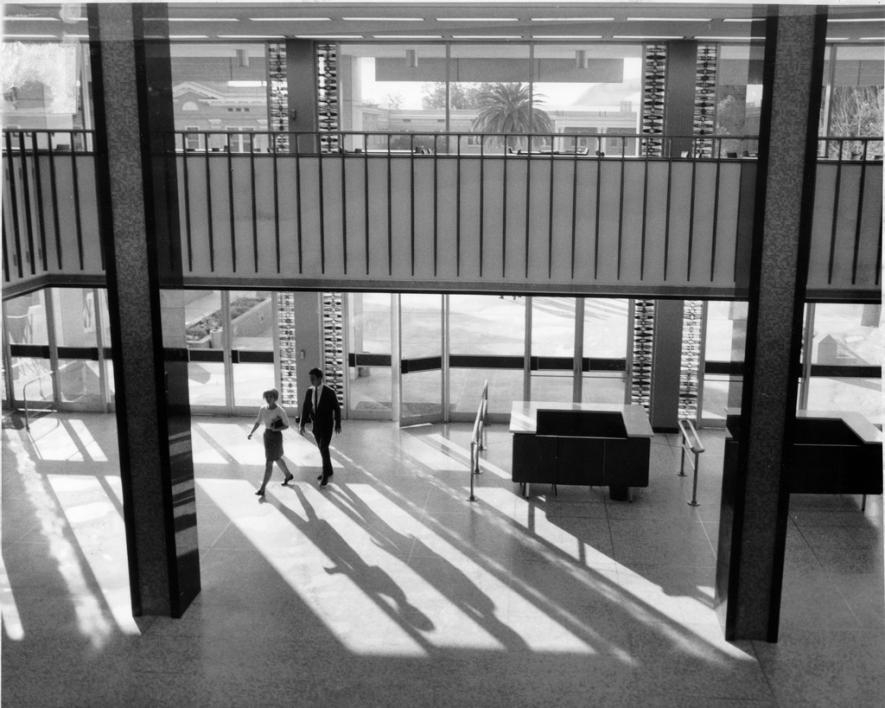 Enhancing and restoring mall-level access to Hayden Library, as pictured here in 1966, is one of the guiding design principles of the current renovation project.

Significant changes will include the implementation of a newly integrated library system and updated service platform, a merging of technology and bibliographic units, the expansion of the ASU Digital Repository, and a new name: ASU Library. What’s available online and what’s available in ASU Library’s buildings will all add up to one library accessible to every ASU user.

“The name change is reflective of the work we are doing to better integrate and align our services for a more seamless customer service experience,” said Tomalee Doan, associate university librarian. “The new digital service platform we’re building will transform the ways in which we do business and operate as a library, in addition to how we connect users to information.

“We are taking a look through a different lens, looking at every tool and every service option possible. It’s a total transformation; we are really building a library of the future.”

Under this new library system, customers can expect more rapid service than before, with expedited and same-day delivery options available, similar to Amazon Prime. In addition, the new system will offer advanced digital tools for searching, browsing, sharing and customizing information and materials.

“Research and teaching excellence depends on stellar library resources and support,” said Devoney Looser, a professor in ASU’s Department of English and chair of the Library Liaison Committee. “These plans for bringing forward ASU Library promise to enhance and expand opportunities for faculty and student knowledge-building. What a fantastic thing for our community.”

As the digital library and the nature of e-books continue to evolve, O’Donnell says the goal is for ASU Library to be well positioned to harness them.

“It’s an exciting time for libraries that are beginning to find their foothold in the digital age,” O’Donnell said. “We’ve got so much to offer, and with today’s technologies and ASU’s resources, together, there is limitless potential for what we can do.”

For more information about the renovation, see Hayden Renovation FAQs.

An ancient history professor with an upcoming lecture at ASU says it’s important to remember the past as we deal with mental health care in the present.Carol Neel, of Colorado College, said such awareness “expands our own imagination in responding to mentally ill people among us.”Her talk, “Demons, Sorrow, Charity: Medieval Religious Communities, Lay Brothers and Sisters, and Mental Illnes... 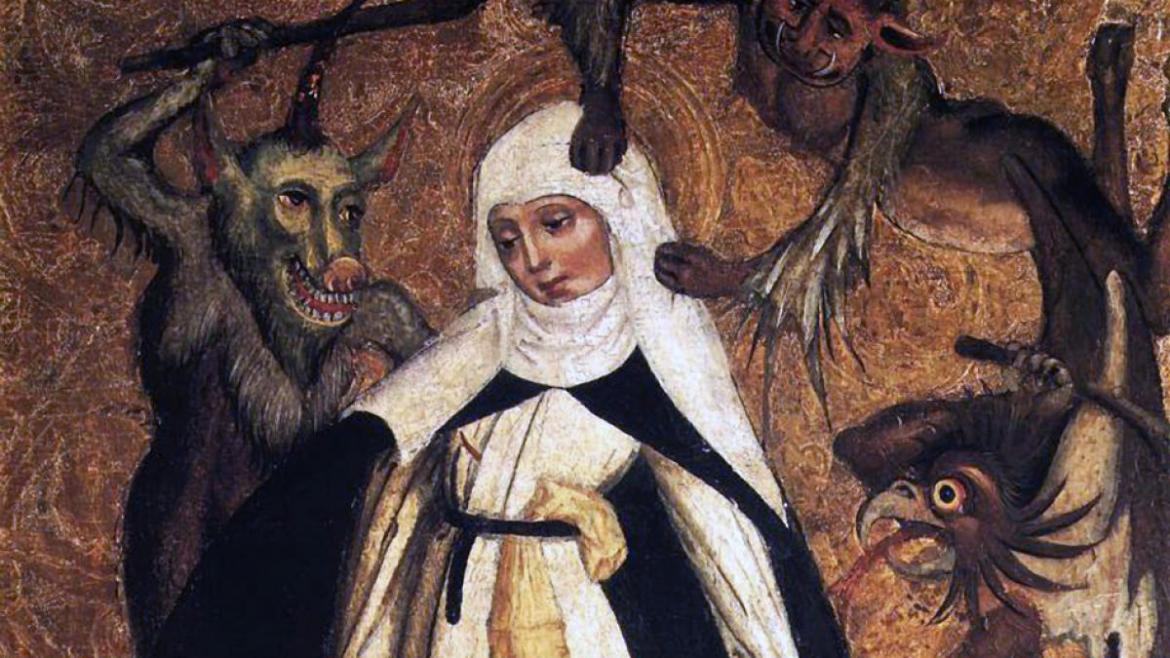 History professor Carol Neel visits ASU to discuss notions of mental health in the Middle Ages, what we can learn from it now

An ancient history professor with an upcoming lecture at ASU says it’s important to remember the past as we deal with mental health care in the present.

Carol Neel, of Colorado College, said such awareness “expands our own imagination in responding to mentally ill people among us.”

Her talk, “Demons, Sorrow, Charity: Medieval Religious Communities, Lay Brothers and Sisters, and Mental Illness,” at 6 p.m. Thursday, Dec. 1, is well-timed. About 10 million Americans face symptoms of depression triggered by the winter blues, which psychologists say can be linked to the holidays. 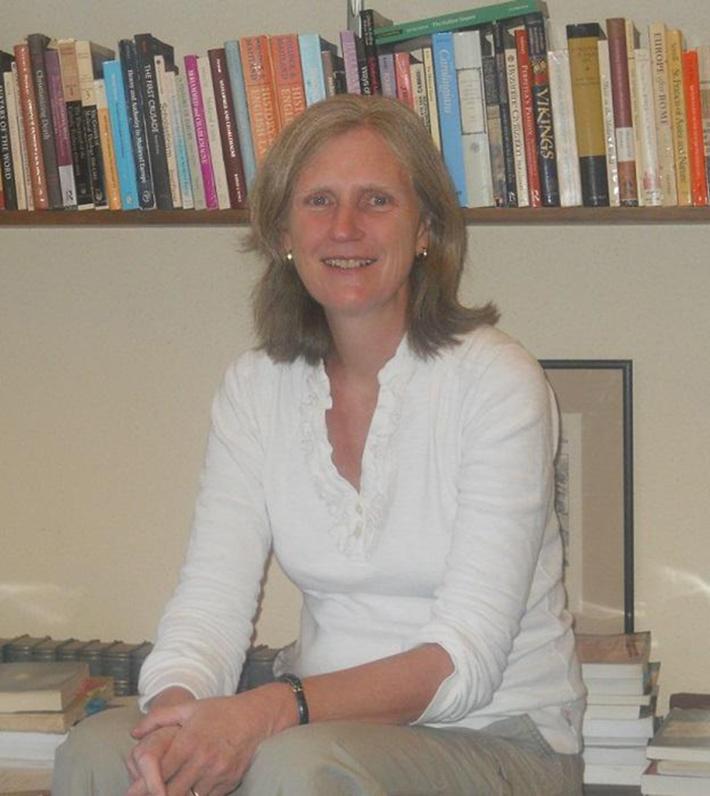 Carol Neel, professor and chair of history at Colorado College, will speak at ASU about how mental illness was dealth with in the Middle Ages.

“A lot of people, during the holidays look at what is displayed in popular media, with happy families getting together and celebrating,” ASU psychology professor Suniya Luthar said. “And if you’re not with loved ones yourself during these times, it can engender enormous feelings of aloneness and grief.”

Luthar also said that even people with family around can feel stress from high expectations or peer pressure.

During the Middle Ages, Neel said, mental illnesses were treated more like a community issue rather than one specific to an individual. The way society has dealt with mental illness has changed drastically. It was only half a century ago that lobotomies — now universally condemned by mental health experts — were considered a legitimate treatment for a variety of psychiatric conditions, from depression to schizophrenia.

“One of the things they didn’t have in the Middle Ages, obviously, was Facebook and social media. People tend to post their happiest photos and moments on social media,” she said, adding that it can lead to constant comparisons and anxiety.

“Medieval monks surrounded sufferers with a circle of support from human hands and angelic voices,” she said. “This entire approach showed basic differences between moderns and medievals in their views of both illness and society.”

Such contrasts shed light on historical notions of community and perhaps show a link between the ancient and modern worlds.

“Most recent empirical work in the psychology of religion does indeed show that some aspect of religion … correlates positively with some index of well-being,” wrote ASU associate professor of psychology Adam Cohen in the article “The Relation between Religion and Well-Being.” “Religious people report being happier and more satisfied with their lives.”

These findings support Neel’s suggestion that even in modern times, there are more ways to think about mental illness than the strictly medical.

“That historical depth of perception is important for understanding our contemporary situation,” said Robert Bjork, ASU Foundation Professor of English and director of the Arizona Center for Medieval and Renaissance Studies, which is sponsoring Neel’s lecture.

James O’Donnell, professor of ancient history and religion and ASU university librarian, who helped organize the event, added, “We like to assume — as all human beings of all periods have assumed about various things — that we’ve got [mental illness] nailed, that we are superior beings.

“We don’t; we’re not. This is an area in which there’s still more for us to understand about the human mind, its frailties, strengths and experiences.”

Those interested in attending Neel’s lecture — free and open to the public at Hayden Library on ASU’s Tempe campus — can RSVP here.