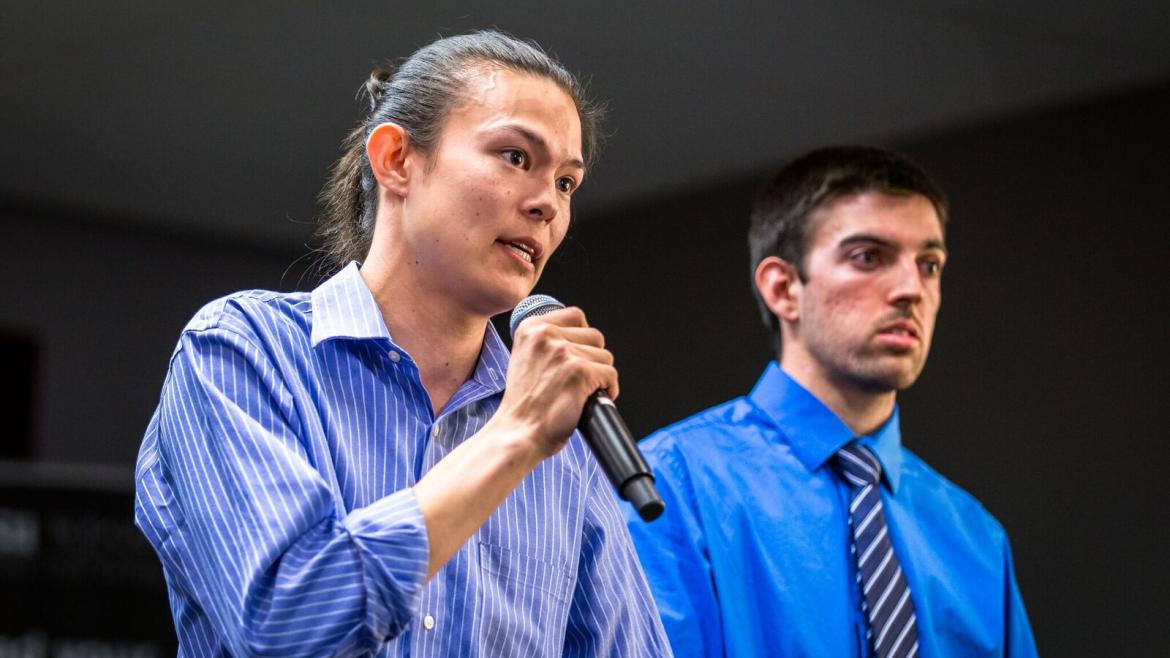 Sweeping entrepreneurial programs at ASU nurture student entrepreneurs.
ASU provides everything from advice and workspace to thousands in investments.
November 28, 2016

One company makes nanoparticle coatings and another creates theater for young children. Other ventures include a nonprofit that cleans water for poor villages, a gig economy of English-language speakers and an app that makes charitable donations easier.

These wide-ranging projects were all launched by Arizona State University students and nurtured by the university’s sweeping entrepreneurial programs, which provide everything from expert advice and workspace to thousands of dollars in investments. And every year, more high-level competitions pump more money into student-driven ventures.

The programs make ASU a magnet for innovators at every stage of entrepreneurship, from freshmen with a wild idea to community business owners who want to expand, crossing disciplines and putting students together with people who have succeeded — and failed — at creating new businesses.

This sprawling model allows ASU to reach more potential innovators, said Christie Kerner, director of the Center for Entrepreneurship in the W. P. Carey School of Business at ASU.

“We have a highly distributed model for entrepreneurship at ASU, and it’s quite powerful,” Kerner said.

“By having several pockets of entrepreneurship, we keep the concept of innovation and the entrepreneurial mindset much closer to the technical thinker. If it lived solely in the business school, we would have a lot of business people talking about how they would change the world. But we wouldn’t have the nursing student or the journalism student.”

“We’re all fans of building something that will change peoples’ lives for the better, but there’s only a small percent who are actually willing to engage in the hard work of building a product or service that will deliver that impact,” said Sebold, director of the Startup CenterBoth Kerner and Sebold are also on the executive team at ASU Entrepreneurship and Innovation within the Office of Knowledge Enterprise Development. in the Ira A. Fulton Schools of Engineering at ASU. He and Kerner are cross-appointed to the Office of Entrepreneurship and Innovation, Sebold as executive director of venture development and Kerner as executive director of ASU student entrepreneurship.

There are currently about 200 student ventures at ASU, Sebold said.

“We have 600 student-athletes at the university, and I feel we should have at least 600 student entrepreneurs.”

One of the first places that students encounter the entrepreneurial mindset is in the classroom. ASU offers more than 90 academic courses in entrepreneurship, ranging from a one-credit online course called “Start-Up School” to a class on “the enterprising musician.” There are four undergraduate degrees, eight master’s programs and four certificates that have an emphasis in entrepreneurship.

New this year is the three-semester master of arts program in creative enterprise and cultural leadership, according to Linda Essig, director of enterprise and entrepreneurship programs in the Herberger Institute for Design and the Arts. The degree is designed for people who want to create successful enterprises in the art and design world.

Essig said the Herberger faculty has driven the outlook that art can be aligned with making a living.

“Unlike many arts schools across the country, many of our faculty are really invested in the idea that artists and designers can and should make their way in the world through entrepreneurship, and we value the ability of our students to innovate and to be the designers of their own future,” she said.

Outside the classroom, young entrepreneurs are nurtured through student groups, idea showcases and maker spaces to try things out. Every Thursday night, the Generator Lab hosts a speaker, team-building mixer or other event to inspire future innovators. 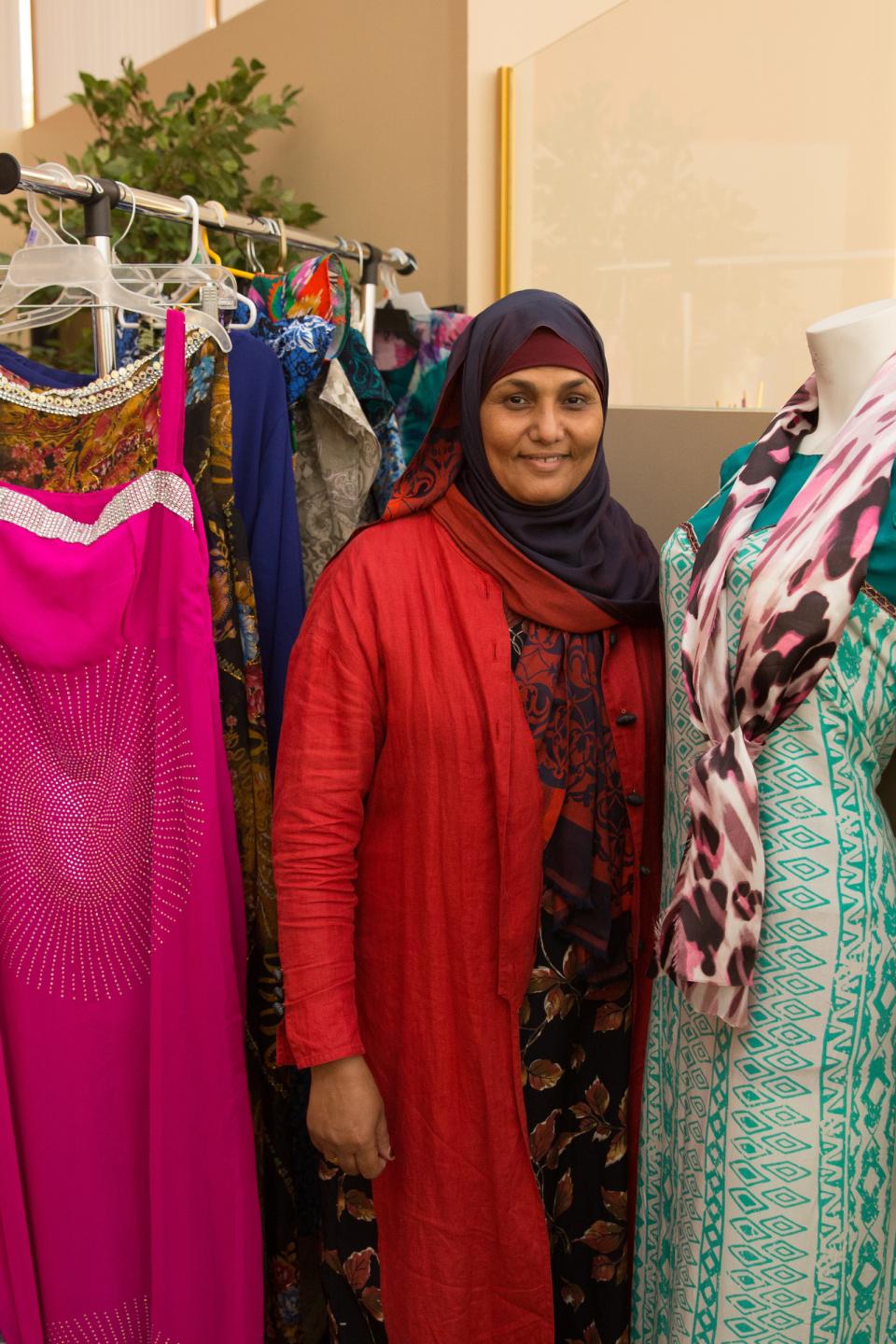 Yasmin Ahmed of the Somali United Council of Arizona shows off her designs during the Social Entrepreneurship Expo last year, in which students in ASU's School of Social Work trained refugees in entrepreneurship. Photo by Deanna Dent/ASU Now

• The annual Hacks for Humanities is a 36-hour competition sponsored by Project Humanities in which students, faculty and community members create technical solutions to address social issues.

• The Healthcare Entrepreneurship Clinic partners students in the Sandra Day O’Connor College of Law with early-stage health-care and technology start-ups.

• Last year, the Office of Global Social Work led a team of undergraduate and graduate students gave technical assistance to the several Phoenix refugee groups as they created their entrepreneurial pitches for investors.

Like the free-market economy that’s based on competition, one of the most important parts of ASU’s entrepreneurial offerings are the contests. They range from just-for-fun events to contests in which winners take home a few hundred bucks to big-time competitions that offer tens of thousands of dollars from investors.

The Herberger Institute’s Pave Program in Arts Entrepreneurship runs the Arts Venture Incubator, which has launched several dozen student-led enterprises in Arizona, including Kerfuffle, which creates theater for young children in Mesa. More than 20 teams applied for the incubator this year, Essig said.

Some competitions have two rounds, offering money to the semi-finalists so they can prepare their final pitches. Some are invitation-only, based on how well the teams perform in an entrepreneurial class.

The Sun Devil Igniter Challenge awards a $50,000 investment to the team that creates an idea that has the potential to disrupt an industry. The winner this year, chosen earlier this month, is Koine, a platform that makes it easier for people to donate to charity through social media.

The New Venture Challenge awards more than $110,000 in cash and services. Last spring, four teams divided the prize money, with LN Technologies the winner and Chang’s Chat coming in second. That competition is part of a graduate-level course run by entrepreneur Scott Wald, a software entrepreneur who earned a master’s of business administration degree from ASU.

New last year was the Pakis Social Challenge, which awarded $20,000 to a team that creates a solution to a social problem. Last year’s winner was the All Walks Project, a nonprofit organization created by ASU students that helps victims of sex trafficking.

Many of the winning ideas are technologies — apps and platforms — or nonprofit service models. But new this year is the Glowing Minds Consumer Product Challenge, which will award $35,000 to a team that creates an innovative product. The competition is funded by David Watson, who created the Philosophy beauty brand.

“He came to us and said, 'I want to see more people focus on innovation in the consumer product category,'” Kerner said. Chang Liu, left, and Megan Kirk pitched their business, then called Let's Chat, at the New Venture Challenge in May. With $145,000 in cash investment and services, the team changed the name to Chang's Chat. Photo by Charlie Leight/ASU Now.

Part of the entrepreneurial mindset is the ability to be nimble. Two of the most successful ASU start-ups learned how crucial that skill is.

Chang’s Chat is a platform invented by three ASU students, Megan Kirk and Elizabeth Oviedo, who graduated with master’s of business degrees last spring, and Chang Liu, a marketing student in the W. P. Carey School of Business. Liu came up with the idea when she arrived at ASU and realized that despite years of learning English in China, she couldn’t communicate. She found that conversation with a native speaker is the best way to learn a new language.

Chang’s Chat lets native speakers in the United States earn money by holding conversations with English-language learners in China through a smartphone app.

Like many of the most successful ventures, Chang’s Chat was in multiple competitions, winning some but not all. In total, the business has reaped more than $145,000 in cash and services. The team won time spent with a branding expert and an intellectual-property lawyer, who persuaded them to change the name from Let’s Chat to Chang’s Chat.

Another big winner, LN Technologies, had to pivot as well.

“What we thought the business would be is completely different from where we are now,” said Peter Firth, a doctoral student who launched the company with Zachary Holman, an assistant professor in the School of Electrical, Computing and Energy Engineering at ASU. They developed a delivery system for nanoparticle coatings, similar to an aerosol spray nozzle.

“We thought we would sell equipment and that was our business,” Firth said.

But after working with Wald, the team changed course and is licensing its technology — “something we never would have thought of on our own and much more viable than what we thought of.”

While the investments in some of the ASU competitions seem huge, it takes a lot of money to start a business. Right before winning the $45,000 New Venture Challenge in May, Firth and Holman found out that they won a $2.2 million grant from the Advanced Research Projects Agency, part of the U.S. Department of Energy.

LN Technologies is currently doing feasibility studies with several companies and Firth is hoping their technology will be integrated within a year.

Besides winning the competition investment, the business also got help from ASU’s tech transfer office.

“They really do have one of the best programs in the country, and you can tell they really want you to succeed and they’ll do anything to help you do it.”

Top photo: Drew Tsao (left) and Marcus Jones pitch their charity fund-raising venture, called Koine, at the Igniter Challenge competition earlier this month. Sean Kimball is the other member of the Koine team, which won the event and a $50,000 investment. Photo by Nicholas White/W. P. Carey School of Business

As teaching faculty plan their next courses, ASU Libraries would like to highlight its course rserve service. Course reserves provides shared access to required course material for students enrolled in specific courses. Teaching faculty may submit requests that include books, journal articles and media from the libraries’ collection as well as personal copies of text books and other readings, i...

As teaching faculty plan their next courses, ASU Libraries would like to highlight its course rserve service. Course reserves provides shared access to required course material for students enrolled in specific courses.

Teaching faculty may submit requests that include books, journal articles and media from the libraries’ collection as well as personal copies of text books and other readings, if available. Library-owned videos may also be made available via streaming services.

To ensure that course reserve materials are available at the beginning of the semester, teaching faculty are encouraged to submit requests as early as possible. Requests are processed on a first come, first served basis, and some may take several days or longer to process if checked out materials need to be recalled or new materials ordered. Course reserve staff at each library location will be able to provide more specific information on the copyright process.

For more information about the course reserve service and for contact information for your specific library location visit https://lib.asu.edu/access/reserves.