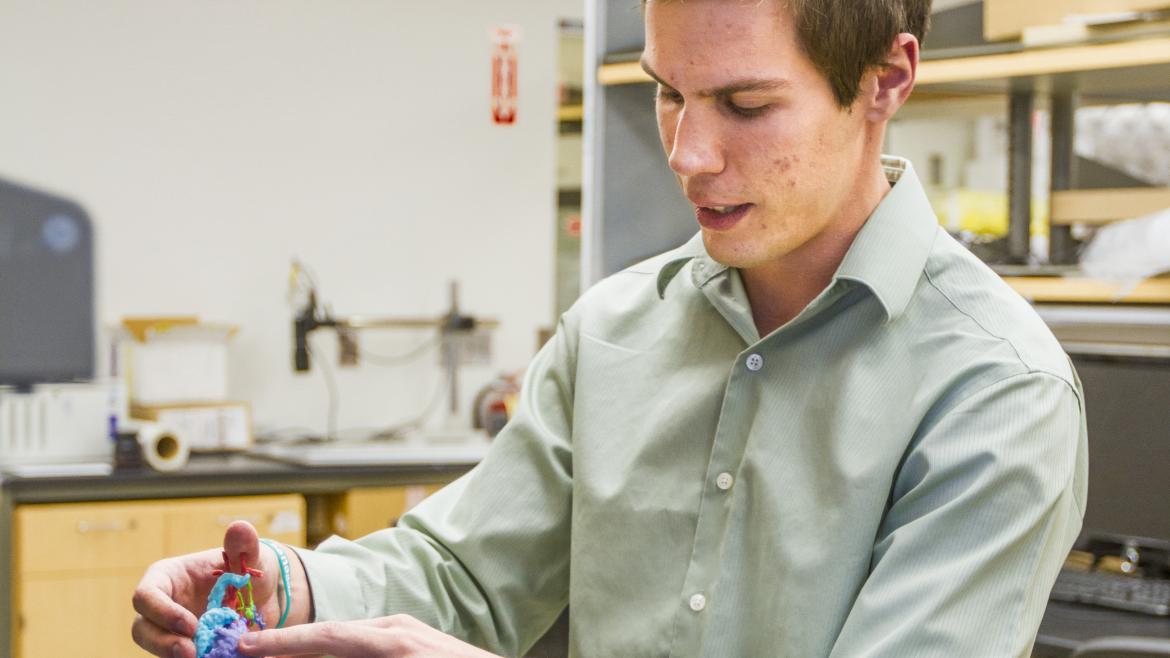 Cardiac 3D Print Lab at Phoenix Children’s Hospital among most prolific in U.S.
The majority of the 3-D printed hearts are used for children’s cases.
November 2, 2016

The solution to a fraught moment in the first episode of the new CBS medical drama "Pure Genius" came from a real-world technology that has been advancing thanks in part to a collaboration between Phoenix Children’s Hospital and Arizona State University: 3-D printed hearts.

At least twice a week, surgeons at the hospital use the devices as they try to save lives, according to university and hospital statistics. Surgeons use the replicas to plan the best ways to fix any number of defects, before they cut into a patient.

He had a hunch that art and design students would be able to see technological possibilities that medical students couldn’t.

Enter Justin Ryan, then an undergraduate majoring in digital art at the Herberger Institute for Design and the Arts — who happened to have an aptitude for science.

“David convinced enough people that as long as I passed my” graduate exam, “I should be admitted to the biomedical engineering graduate program,” Ryan joked.

Today, Ryan, an ASU post-doctoral researcher, runs the Cardiac 3D Print Lab, leaning heavily on his background in 3D modeling for computer animation, which can be directly leveraged for 3-D medical printing.

Although 3-D medical printing wasn’t new, it also wasn’t something doctors could use to save heart patients, such as patients with rare tumors, as depicted on "Pure Genius."

Doctors often need a 3-D printed heart in a matter of hours, at the time the process took weeks.

By concentrating on workflow and borrowing a 3-D printer from an architecture firm to print hearts as training tools for medical students, Ryan and his team got the printing time down to two days, “but what we needed was same-day turnaround.”

The turning point came in 2012 when a grant from the Phoenix Children’s Hospital Leadership Circle funded the purchase of a 3-D printer for the hospital.

“Having the printer at the hospital meant we were right next door,” Ryan said. “The surgeon could look at the images and make multiple adjustments, and then we could print it once.”

A heart can now be printed in nine hours or less, and more than 300 have been produced for surgical guidance, making the Cardiac 3D Print Lab at Phoenix Children’s Hospital one of the most prolific in the nation. The only others that compare are at the Mayo Clinic in Rochester, Minnesota, and Boston Children’s Hospital.

The majority of 3-D hearts are used for children’s cases, but the lab also produces for adult patients at other Valley hospitals, including a 92-year-old, Ryan said.

The technology isn’t limited to hearts, Ryan said. Early trials are underway that involve skin cells. Researchers are hopeful are to experiment with livers. And 3-D printed bone could be possible for cancer patients.

Ryan estimates it will be about 25 years before the technology advances to the point that 3-D hearts can be transplanted into patients. But parts, such as heart valves, will be ready in the next five years. Implantable devices, including stents and clips, will likely be available sooner.

In addition to 3-D hearts, the lab prints other surgical aids, including a variety of tumors.

“Not only does the print inform the surgeon prior to surgery, it helps a child conceptualize what the tumor actually looks like,” Ryan said. “After surgery, we give the patient a 3-D print of the tumor and let him or her smash it.”

The technology, meanwhile, also helped a fictional cardiothoracic surgeon at a Silicon Valley hospital conceptualize the best course of action to save a life, merging the art of TV production with the science of high-tech medicine.

On Nov. 4, the ASU Symphony Orchestra presents "A Circle of Forces." The concert is led by director of orchestras Jeffery Meyer conducting Benjamin Britten’s evocative “Four Sea Interludes,” Prokofiev’s powerful “Symphony No. 5” in honor of the composer’s 125th birthday, and the U.S. premiere of Frank Nuyts’ “Tumbleweed Concerto” for cello and orchestra featuring ASU School of ...

On Nov. 4, the ASU Symphony Orchestra presents "A Circle of Forces." The concert is led by director of orchestras Jeffery Meyer conducting Benjamin Britten’s evocative “Four Sea Interludes,” Prokofiev’s powerful “Symphony No. 5” in honor of the composer’s 125th birthday, and the U.S. premiere of Frank Nuyts’ “Tumbleweed Concerto” for cello and orchestra featuring ASU School of Music professor of cello Thomas Landschoot. The concert is open to all, free of charge.

“Jeffery Meyer has brought a passion for music and the performance of new works, a love for education and students, and tremendous experience and artistry to the ASU School of Music orchestral program,” said Heather Landes, director of the ASU School of Music. “It’s a joy to see our students so excited about making music.” 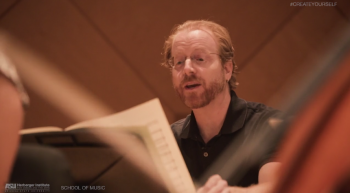 The program Nov. 4 marks Meyer’s fourth concert in his inaugural season as the ASU School of Music director of orchestras, and if you haven’t been able to attend the previous concerts, this musical offering is definitely one not to miss.

“The ASU School of Music is a fantastic program because I get to do what I would do in the professional field every day at school, and I think that’s the beauty of studying music in an institution,” said Meghan Ruel, master of music student in violin performance. “The faculty here are open and conscientious of what our generation has to do right now to ensure that art-making is still in existence.”

"The addition of Dr. Meyer to the School of Music faculty has had an overwhelmingly positive effect on the orchestra and the conducting program at ASU,” said Cullan Lucas, current doctor of musical arts in conducting student. “His character and musicianship has brought a new vitality to the orchestra, and by cultivating a stronger relationship between the Phoenix Symphony and the orchestras at ASU, excitement around the program is certainly at an all-time high. As a graduate conducting student at ASU, the addition of the new conducting studio orchestra has provided invaluable podium time exploring major orchestral repertoire with direct feedback both from the players and Dr. Meyer.”

Meyer’s initiative to engage Phoenix Symphony musicians to teach orchestral sectional rehearsals and the addition of the new orchestral studio class have already had an immediate positive effect on the program and are sure to create great momentum and excitement moving forward.

“The young musicians that make up the ASU orchestra program are some of the most talented performers in the United States, and our orchestra program offers the ASU and surrounding community outstanding concert experiences that should not be missed,” said Meyer. “The energy and commitment on stage can be seen and felt by seasoned concert goers as well as those who are new to the orchestral experience.”

“Through Dr. Jeffery Meyer’s audience-building initiative, we are approaching concert attendance on a whole new level,” said Ruel. “From performing pop-up concerts at the Memorial Union in advance of our main performances to visiting local schools and providing musical experiences for area youth to advertising on social media, we are inviting everyone to our concerts, and we hope that the community will come and experience this wonderful music with us.”

The short video below features a day in the life of Jeffery Meyer. We hope this sparks your interest to come and hear the ASU Symphony Orchestra and support live music in Arizona.

The ASU Symphony Orchestra’s performance of "A Circle of Forces" is Friday, Nov. 4, at 7:30 p.m. at ASU Gammage. Admission is free.