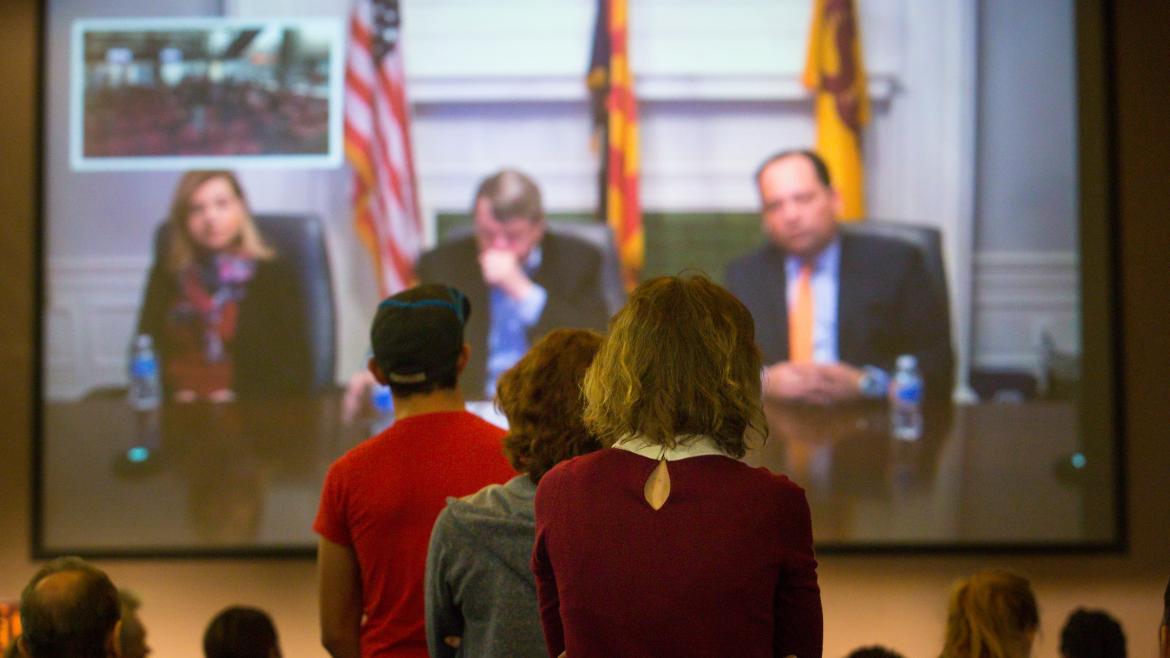 Covering one of the most unusual presidential campaigns in modern history has left the press gobsmacked.

That was the upshot of a roundtable discussion, “How the News Media Covered the 2016 Election Campaign,” with a Washington Post columnist and reporter hosted by Arizona State University’s Walter Cronkite School of Journalism and Mass Communication on Monday night.

“It’s been such a bizarre campaign,” said media columnist Margaret Sullivan. “I wouldn’t give the media particularly high grades in covering this campaign. ... I don’t think we’re coming out of this smelling like a rose at all.”

Washington Post political reporter Philip Rucker and Sullivan joined Leonard Downie Jr., the former executive editor of the Post and Weil Family Professor of Journalism at the Cronkite School, to analyze the media’s coverage of the 2016 election.

Covering an unusual campaign in the usual fashion has been a mistake, the trio said. Donald Trump, the reality TV star, drove ratings during the primary season. As a result, the other 15 Republican candidates got relatively little air time by comparison.

“CNN might have been the worst offender in just giving Trump essentially free amounts of advertising,” Sullivan said. “As Trump himself would say, many people think this was a strategic programming decision. ... It worked, but was it fair to the democracy? I would say it wasn’t fair to the other candidates, and certainly gave Trump a huge boost early on.”

Exactly what “the media” is nowadays came into question. Sullivan said she doesn’t use the word to describe newsgathering organizations.

“It’s really hard to say because it includes social media and cable TV,” she said. “It’s certainly much more varied than it used to be. ... It’s certainly been very effected by the digital transition. ... There’s less of a gatekeeping role by the press.”

Social media is also now part of the story, Rucker said, adding that he uses it constantly. It’s also a requirement; if you’re covering either campaign, you’re going to have to monitor what they say on Twitter.

The challenge for mainstream outlets like the Post is competing against blogs and other outlets that have no professional oversight. The public treats them all alike.

Fact checking candidate’s statements is more prominent in this cycle.

“The challenge for us as reporters is to not just let it exist in the fact-checking column,” Rucker said. Trump’s challenge of President Barack Obama’s birth origin is one example Rucker cited.

“We put that that was not true in the lede of the story,” Rucker said. “People are living in different worlds this election season.”

The New York Times has used the word “lie” when publishing fact-checking stories.

“I think it was a decision to call something what it was, and to be bold about it,” she said. “The word ‘lie’ is very fraught, and should be used sparingly. ... 'Lie' carries with it intent.”

It’s been a ground-breaking year in many ways for the press. Sullivan referred to the Access Hollywood hot mic recording of Trump boasting about groping women.

“We saw some words on the front page of The New York Times I’ve never seen there before,” she said.

Sometimes there’s no time to do the heavy lifting of fact checking in a fast-paced campaign in a 24/7 news cycles.

“There’s no way to deal with it when you have a candidate who traffics in falsehoods every day,” Rucker said. “He exaggerates the size of his crowds.”

Trump repeats lies over and over, and eventually people believe them, Sullivan said.

“It’s a lot of work to push back against that, and that’s part of our responsibility,” she said.

Hillary Clinton has remained closed-off from the press. How should the media cope with a candidate who won’t talk to them?

“Hillary Clinton is famously opaque,” Sullivan said. “She went for a long time without speaking with reporters in any meaningful way. ... If she wins, it’s something we’re going to be dealing with for a long time. That’s her way.”

The two candidates are wildly different, Sullivan pointed out. Clinton has been in the public eye for decades. Trump has not been subject to the same level of scrutiny.

“Does fair mean equally?” she asked. “Because you’re running investigative stories about Donald Trump, does that mean you have to do the same number and type of stories on Hillary Clinton, when there’s not that much there?”

The echo chamber of social media, where people only get news they agree with, is affecting the public perception of the press as a watchdog.

“They think demanding to see Trump’s tax returns is anti-Trump,” Downie said. “As the public becomes more partisan, they have trouble understanding the media role.”

Rucker described the abuse dished out to the press at Trump rallies. “It’s a toxic environment,” he said. “It can be exhausting to be out there every day.”

Sullivan said it was painful to see people thinking so badly of the press.

“We have to tell our story better to counter this,” she said.

They discussed how the vagaries of campaign coverage tilt towards horse-race color rather than anything of substance.

“We actually did an 'issue' series,” Downie said of The Washington Post’s campaign coverage one year. “Nobody read it.”

“I think we have to do it in an easy compare and contrast, maybe in graphic form.” Sullivan said. “We have to realize this is the broccoli and spinach of campaigns.”

What is the best way to excite travelers about a destination?For Arizona State Univeristy undergraduate tourism development and management major Virginia Miller, authenticity is the ultimate experience. This view helped her earn the 2016 Meredith Travel Marketing scholarship at the U.S. Travel Association’s Educational Seminar for Tourism Organizations.“People want to feel at home and part of ...

What is the best way to excite travelers about a destination? 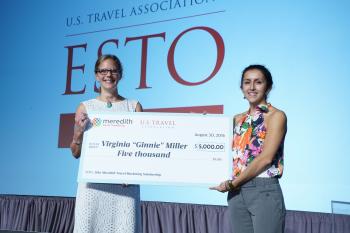 “People want to feel at home and part of the community wherever they are,” she said of the winning essay she wrote promoting authentic destination marketing.

She noted that Destination Marketing Organizations (DMOs) play a key role in the representation and promotion of the communities they represent. Beyond ambassadors to external audiences, they help create local jobs and revenue.

“When destinations are represented in a realistic manner, focusing on real people having real experiences, locals and visitors alike stand to benefit from the positive promotional consideration.”

The concept stems in part from Miller’s concentration in sustainable tourism as part of her degree program in the School of Community Resources and Development in the College of Public Service and Community Solutions.

“The whole program at ASU has made me think about tourism in a different way,” she said. “Sustainable tourism is more than installing solar panels and adhering to a recycling program.”

“How can you plan to leave an area better than when you first arrived? How do you think about a place in terms of your future? You can’t have sustainable tourism and not include the community,” she added.

Miller moved to Arizona after serving for five years in the Air Force. As a services airman, she had already gained hospitality experience. It was also the first time she had an opportunity to travel, and the GI Bill enabled her to pursue higher education.

“I wanted to go to ASU, so I looked under cool majors and found sustainable tourism. It was perfect,” she said. “For me, this is more than selling a dinner package with a hotel room, this is about improving the world and how we view our collective impact towards it.”

She said her purpose is to ultimately serve others, and sees that align with fellow peers in the classroom.

As a senior this year, Miller is looking forward to a spring internship experience. She hopes to work with a local boutique firm as a travel consultant. She said the knowledge she now has of the sector has drawn her to support local, community-based businesses.

“Travel has always been a lifelong aspiration for me. At ASU, I’ve been able to experience responsible travel first-hand, going to Australia and Fiji. And, now I’ve won a national scholarship in an area I love. I am already living out my childhood dream, and this is just the beginning.”