Extinctions past and present, fate of humanity discussed at ASU Origins forum

On a recent evening in Phoenix, four scholars gathered at the downtown Orpheum Theatre for an ASU Origins forum devoted to climate change, mass extinction, human origins and the fate of humanity.

Much of the discussion revolved around the accelerating pace of species loss resulting from a variety of human-induced pressures. This planetary transformation is described in a new book by journalist and Origins guest Elizabeth Kolbert: “The Sixth Extinction: An Unnatural History,” which was awarded the 2015 Pulitzer Prize for General Non-Fiction. 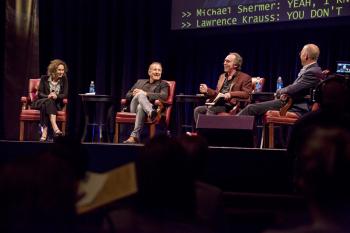 The gathering, dubbed “Inconvenient Truths: From Love to Extinctions,” drew an enthusiastic crowd. Kolbert, a writer for both the New York Times and the New Yorker Magazine (her most recent piece for the New Yorker, Greenland is Melting, is dedicated to ASU researcher Alberto Behar), was joined onstage by Michael Shermer, columnist for Scientific American, founder of the Skeptics Society and editor-in-chief of its magazine Skeptic; and Curtis Marean, professor in the School of Evolution and Social Change and associate director of the Institute of Human Origins at ASU.

After taking the stage, Krauss, a self-described political junkie, alluded to the presidential debates unfolding in Las Vegas that same evening: “I’ve been in my dressing room for the past half-hour listening to convenient untruths,” he joked. (As with previous presidential debates, climate change was not on the menu.)

“It is a momentous time,” Krauss said, referencing the latest scientific reports establishing that atmospheric carbon dioxide, recently measured in Hawaii, has reached an ominous milestone of 400 parts per million, the highest in human history. Given the gravity of environmental transformation, the theme for this year’s Origins series — human challenges in the Anthropocene period — seems appropriate.

Citing Kolbert’s most recent book, Krauss ticked off some of the alarming planetary extinctions currently unfolding. Amphibians are the most severely threatened organisms, with extinction levels as high as 45,000 times the background rate. They are not alone. A third of all reef-building corals, a third of all freshwater mollusks, a third of sharks and rays, a quarter of all mammals, a fifth of all reptiles and a sixth of all birds are headed toward oblivion.

Krauss pointed out that to address modern challenges we have to get rid of a priori myths and biases, and explained that panelist and professional skeptic Michael Shermer would outline methods to do just that.

Finally, Krauss pointed out that climate change and extinctions have played an important role throughout human evolution. The culture and development of early hominids were dramatically affected by shifting climate, as the ancestors of all modern humans dwindled to a population of perhaps 500 individuals located in what is now southern Africa.  This critical population has been studied by Marean.

The first speaker, Kolbert, painted a picture for the audience of what these extinctions mean, describing a few of the magnificent creatures heading inexorably toward the precipice. Her lecture was accompanied by a series of photos by Joel Sartore for National Geographic’s Photo Ark, a project designed to document and raise awareness of the plight of endangered species.

The opening photo was of Harapan, a Sumatran rhino that was born in the Cincinnati Zoo.

“He was part of a well-intentioned but very ill-fated attempt to save this species, which has been in deep trouble for several decades,” Kolbert said.

Captive breeding efforts had failed after seven Sumatran rhinos were brought to the U.S. Their numbers dwindled to just two: Harapan and his sister. After his sister died, Harapan was returned to Indonesia where the last remnants of the breeding program still exist. Such rhinos have been ravaged by poaching and habitat destruction in Sumatra and Borneo.

Orangutans and lowland gorillas, our primate cousins, are severely threatened in the wild, the first by the conversion of vast forested habitats to palm-oil plantations and the latter by a series of calamities, including human conflict and Ebola, Kolbert explained.

The brilliantly colored kakapo, a species of parrot native to New Zealand, is threatened with extinction due to the introduction of invasive predators. Kakapos evolved at a time when New Zealand had no terrestrial mammals. As the only species of parrot that is flightless, they are extremely vulnerable, and now exist only on two tiny islands that have been cleared of predators.  The kakapo’s future is uncertain.

Among the other endangered species described were a remarkable, scaled creature known as a white-bellied pangolin, a burying beetle known for wrapping and interring dead carcasses used to feed its offspring, and an axolotl — an otherworldly salamander native to Mexico and immortalized by the Argentine writer Julio Cortazar. Axolotyls are now believed to be extinct in the wild.

Kolbert’s sad accounting concluded with a slide showing Toughie, the last Rabbs' fringe-limbed treefrog. Toughie was taken from the Panamanian rainforest in 2006 in an effort to save the last remnants of his kind, victims of a mysterious fungal disease. Toughie died at the Atlanta Botanical Garden on Sept. 28, rendering the species officially extinct.

The next guest, Shermer, described the current political impasse in dealing with climate change and other looming challenges. He outlined several techniques for reaching those who may be resistant to facts.

Shermer said that foundational beliefs and worldviews frequently color human perceptions and can lead to delusional systems of explanation. He listed as examples creationism, 9/11 truthers, the anti-vaccination and Obama birther movements as well as climate denial.

Birth of a superpredator

Marean then spoke of the critical events in human evolution leading to the sixth extinction described by Kolbert.  Marean is an authority on early modern humans. His work focuses on a series of caves in South Africa, which were continuously inhabited from 160,000 to 50,000 years ago.

It is now considered likely that everyone alive today descended from this population. Indeed, homo sapiens very nearly joined the list of extinct species but for a few lucky breaks allowing our kind to decimate our hominid relatives, colonize the globe and fill every ecological niche.

Marean described a time roughly 70,000 years ago when the current area of the Sinai desert existed as a grassland environment. During this period, the founder population of all Eurasians left Africa, leading to the human lineages existing today: Africans and Eurasians. Marean referred to this critical occurrence as “the most consequential event of colonialism.” The Eurasian lineage radiates out of Africa, interbreeding along the way with Neanderthals. (Marean noted that all Eurasians today carry fragments of Neanderthal DNA, unlike their African counterparts, who do not.)

“By 45,000 years ago, modern humans actually managed to make it into circumpolar environments. A tropical human!” Marean said. “By 14,000 years ago, they make it all the way to South America, and all along the way, our cousins and the megafauna are going extinct.”

Emphasizing the breathtaking trajectory of human advance, Marean asked the audience to imagine an alien race visiting Earth around 200,000 years ago, at a time when modern humans share the planet with a menagerie of hominid relatives. Returning again today, in what amounts to the blink of an eye in evolutionary time, these alien observers would find, to their horror, that one species has wiped out all hominid competitors as well as huge megafauna like woolly mammoths and mastodon — destroyed in advancing ripples of destruction.

Briskly populating the globe and contaminating their biosphere, the sole surviving hominids have now reached out into space. Marean poignantly refers to modern humans as the most successful species but also the loneliest.

How did we do it? According to Marean, we owe our success to a pair of evolutionary adaptations. The first is hyper-cooperation among non-kin. Such cooperation is unique in the animal world — only our lineage has it. The second adaptation involves the use of sophisticated projectile weaponry. (Marean lays out the details of his hypothesis in a fascinating piece for Scientific American.)

Marean concluded by suggesting that if humankind’s unique capacity for cooperation can be globalized for the sake of human survival, we may yet find a way out of the labyrinth of climate change and extinction now threatening the existence of myriad species, perhaps including our own.

Hockey Back to Business at Home vs. #13 Harvard

Hockey Back to Business at Home vs. #13 Harvard