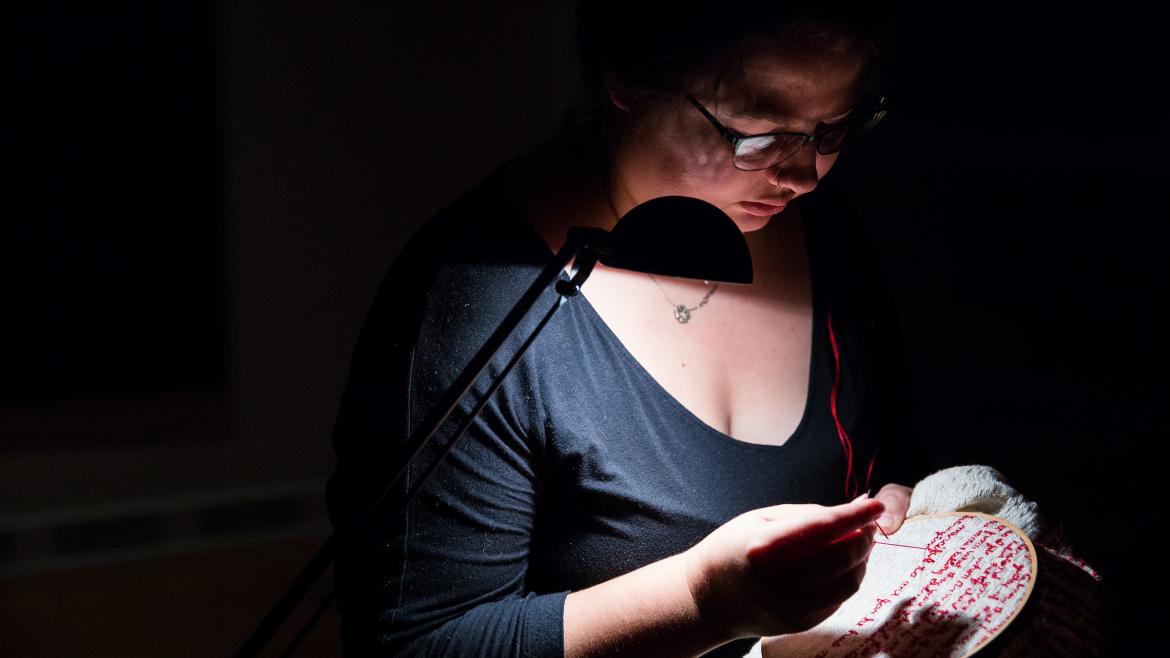 Connecting to the body through art

In the art world, Ana Mendieta’s name is a source of sorrow, reverence and inspiration. The Cuban-born American artist’s mysterious death in 1985 is a point of intrigue and has led to a resurgence of interest in her artwork in recent years.

But her work stands apart from the scandal.

This semester, the ASU Art Museum is exploring her legacy in "Energy Charge: Connecting to Ana Mendieta," which features an iconic selection of Mendieta’s work from 1972–1985 alongside the work of five contemporary artists from across the United States.

Like Mendieta, the contemporary artists featured in the exhibition, Ana Teresa Fernández, Kate Gilmore, Simone Leigh, Gina Osterloh and Antonia Wright, explore issues of race, gender and politics through their bodies. For instance, in Ana Teresa Fernández’s "Erasure" series, Fernández paints her body completely black as a response to the 2014 disappearance of 43 young male students from Ayotzinapa, Mexico, who were presumably killed for staging protests that disrupted their small town.

This performative process — using the body to create artwork — is echoed in the work of the local artists and ASU students and faculty who are participating in the live "Energy Charge" performance series, which takes place throughout the exhibition’s run. A view of the durational performance piece "All I'm Taking with Me" by Kate Gilmore on Oct. 1, where performers  select and go on display with objects from the ASU Art Museum's collection on a platform in the gallery. Gillmore's performance repeats every Saturday through Dec. 5. 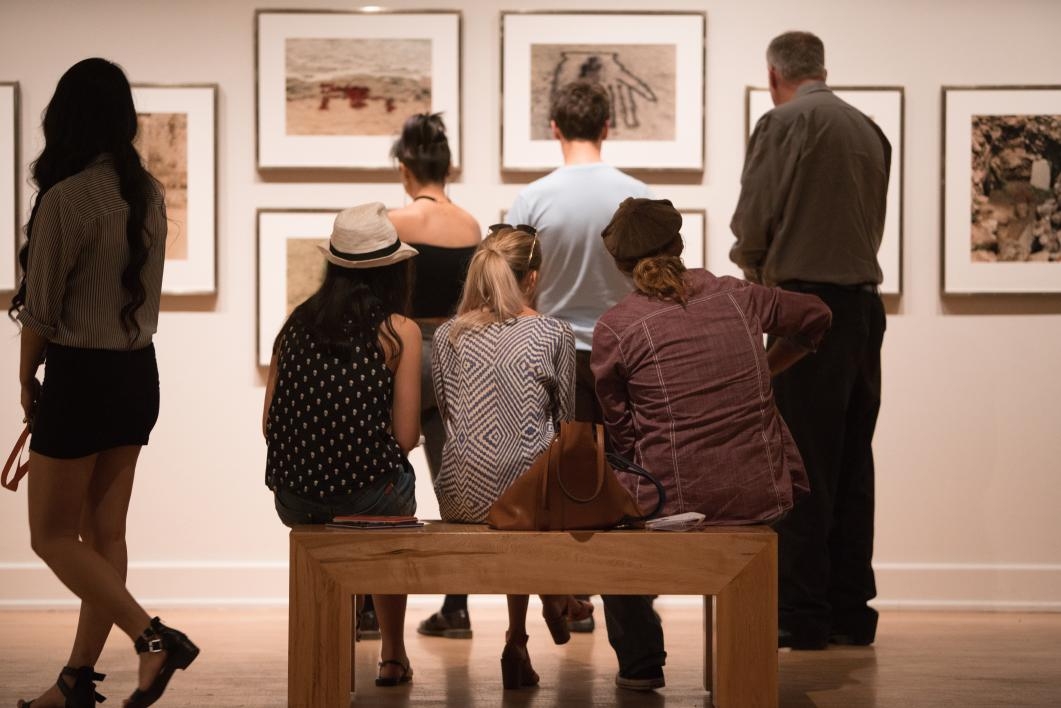 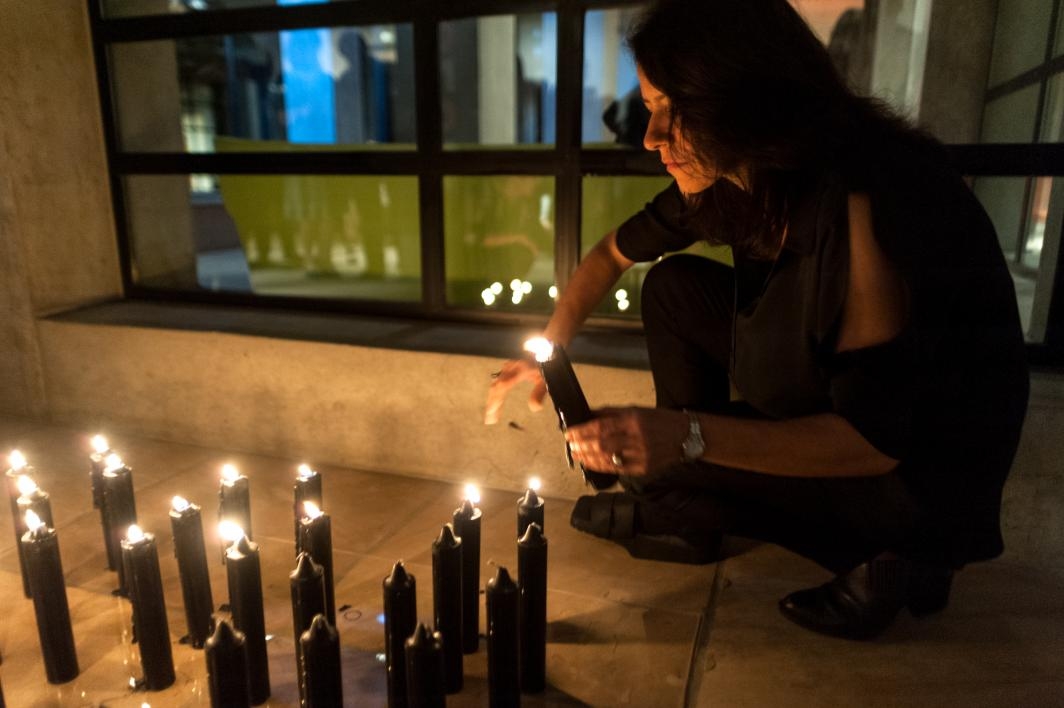 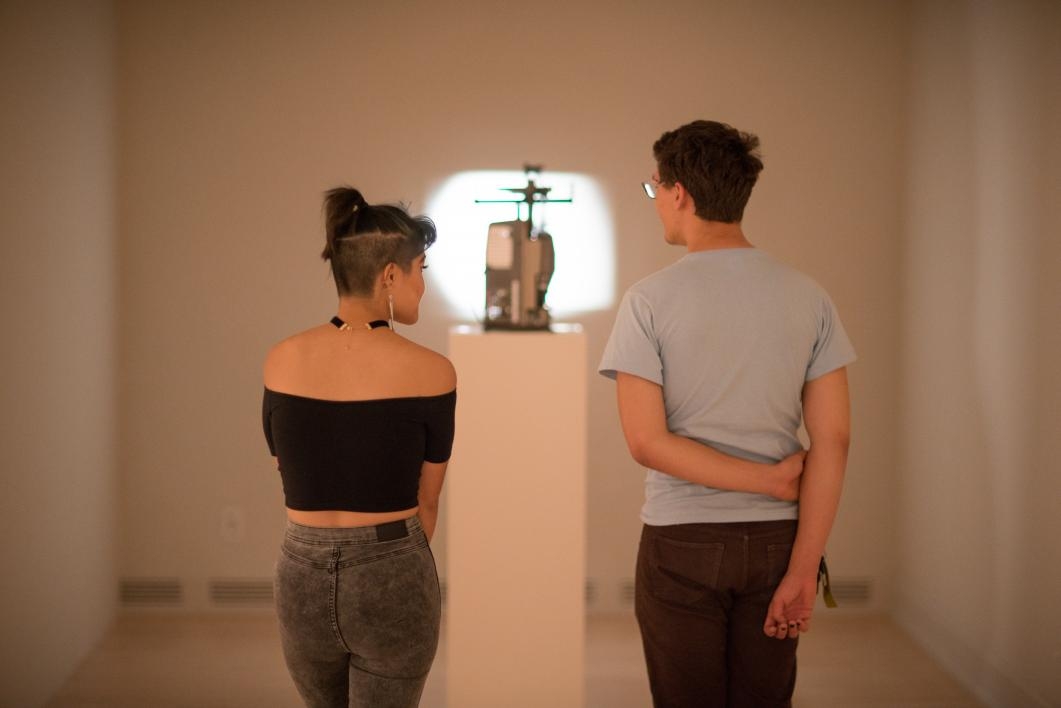 “The live bodies in the museum’s galleries bring a whole other layer of content and experience,” exhibition curator Heather Sealy Lineberry said.

“Last Thursday night, dance faculty members Eileen Standley and Melissa Britt presented a performance with a dancer in her ninth month of pregnancy, who moved in surprising and beautiful ways and was contrasted with the female bodies in the projections and photographs in the galleries,” Sealy Lineberry said. “Mendieta often talked about issues of birth and rebirth in her work, arising from her personal history as an immigrant and leaving her homeland at a young age, and having the pregnant body in her spaces brought a poignant connection to this emotional undercurrent.”

“I think part of the reason I’m drawn to Mendieta’s work so much is because it engages with the body,” said Raji Ganesan, an ASU student pursing a degree in informatics, who is performing a piece next month as part of the series.

“We carry injustices in our bodies, and, for me, dance is what allows me to connect to that history,” she said.

Ganesan’s piece, "Negotiations," is a collaboration with two ASU alumni, Carly Bates and Allyson Yoder, and was originally performed in March of this year as the performers’ theses for Barrett, the Honors College. She said she is excited to have the opportunity to perform the piece again in conversation with the artwork in the museum.

“Ana Mendieta, who was working in the 1970s, actually felt that live performance was too immediate and the audience needed a distance from the work to fully contemplate and respond to it,” Sealy Lineberry said. “The performance series recognizes the changes in the field since that time, and presents a different perspective on the possibilities of live performance.”

This week you can catch two performances on Thursday, Oct. 6 — Neha Vedapathak’s "Transformation" and the lighting of Ana Mendieta’s "Ñáñigo Burial" — and two performances Saturday, Oct. 8 — Shannon Ludington’s "As I Cannot Write" and Kate Gilmore’s "All I’m Taking with Me."

"Energy Charge: Connecting to Ana Mendieta" is on view at the ASU Art Museum through Dec. 31. Check out the full list of programs and performances at asuartmuseum.asu.edu/energy-charge.

This exhibition is generously supported by the Diane and Bruce Halle Foundation. Additional support comes from the Andy Warhol Foundation for the Visual Arts, the Helme Prinzen Endowment, the Herberger Institute for Design and the Arts, Diane Harrison, the ASU Art Museum Creative Impact Board and the members of the ASU Art Museum.

The exhibition was curated by Heather Sealy Lineberry, senior curator and associate director, and Julio Cesar Morales, curator, with assistance from Windgate Curatorial Interns Angelica Fox and Kev Nemelka. Special thanks to the exhibiting artists and lenders, and the Estate of Ana Mendieta.

Top photo: Artist Shanon Ludington performs "As I Cannot Write," a piece that recreated an embroidery sampler by Elizabeth Parker, a young 19th-century woman who used this traditionally passive and feminine craft to tell the story of her rape on Oct. 1. Ludington will be repeating her performance on Oct. 8 and Nov. 12. Photo by Deanna Dent/ASU Now

Universities play a crucial role in the global acceptance of religious diversity and the bolstering of global literacy, according to the U.S. State Department’s Special Representative for Religion and Global Affairs.“Universities are training the next generation of globally literate and smart cosmopolitan people,” said Shaun Casey, who advises Secretary of State John Kerry on policy matters ...

Universities play a crucial role in the global acceptance of religious diversity and the bolstering of global literacy, according to the U.S. State Department’s Special Representative for Religion and Global Affairs.

“Universities are training the next generation of globally literate and smart cosmopolitan people,” said Shaun Casey, who advises Secretary of State John Kerry on policy matters as they relate to religion. “Universities are training the next generation of Foreign Service officers who are going to be the front line of our American foreign policy. Universities are, many times, the first place that 18-year-olds encounter a global world view and encounter students from all across the world.” 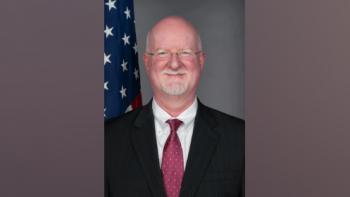 He spoke with ASU Now in advance of his remarks about the role religious communities play in refugee crises, how religion impacts United States foreign and domestic policymaking and the State Department’s role in managing the occasionally fraught relationship between Islam and the west.

Question: How do you see your office’s role specifically with regard to Islam? What are the challenges you’ve encountered there? Do you see it changing?

Answer: While not all of what our office does, a part of our work is that we need to make sure that we have robust engagements with various Muslim-majority countries, and with Muslim organizations around the world to make sure that any kind of misunderstanding, or any kind of narrative of a clash of civilizations was in fact false, and that we have a robust set of strategic interests across the Muslim world.

If you look at the global coalition to oppose ISIL, many of them are Muslim-majority countries. I think you see an unprecedented coalition to combat the global threat ISIL poses. I would point to this as concrete evidence that a vast majority of the Muslim world has come together in this coalition, not only to militarily oppose ISIL but combat various ideologies that might lead some people to radicalization.

Q: What is the role of the university in religious affairs and global conflict, and how can they support these efforts?

A: There are three ways universities play this role. First, even though I’ve got a lot of well-trained, smart people in my office, we routinely partner with religion scholars throughout the world to make sure we’re fully literate and aware of religious dynamics in various geographical contexts. I think we’ve done very well in our office partnering for academic expertise to reach beyond our immediate knowledge set.

Second, universities are training the next generation of globally literate and smart cosmopolitan people. Universities are training the next generation of Foreign Service officers who are going to be the front line of our American foreign policy. Universities are many times the first place that 18 year olds encounter a global world view and encounter students from all across the world. I would not be here today if it were not for the university and graduate school experience I had. It’s impossible to overstate the cultural and political importance of that function.

Thirdly, one of the things we promote is religious literacy. As the United States becomes more diverse and pluralistic from a religious standpoint, the vital role that a liberal arts education has in helping Americans become more literate not only in the United States context, but also in the global context.

Q: What is the role the religious community plays with regard to refugees, people who are often victims of ideological conflict?

A: We are facing an unprecedented global challenge in the refugee space. There are over 20 million refugees in the world and over 40 million people who are internally displaced. At one level, religion at least in part is often a driver for creating displacement, but in the United States and elsewhere, religious communities are an absolutely indispensable part of refugee resettlement. Here in the United States in the last fiscal year, we resettled 85,000 refugees; the year before that it was 70,000. Going forward in the current fiscal year, the president has pledged to resettle 110,000 refugees. Six of the nine national implementing agencies who do the physical resettling are faith-based groups. The resettlement agencies, in turn, work with local religious communities — Christianity, Judaism, Buddhism, Islam and others. Going from 70,000 to 110,000 refugees is only possible because religious communities are doing that work

Q: What do you see as the impact of religion on policymaking, not only foreign policy, but domestic policy?

A: In addition to refugees, a second area where religion impacts policy or has an effect on policy is in the climate change space. Last December the world came together and came to this agreement — the Paris agreement — where we agreed as a globe to cut carbon emissions and build a financial infrastructure to help mitigate and adapt to climate change. One of the key moral voices in that was Pope Francis, who wrote an encyclical that came out right before the Paris meeting. Religious communities are at the forefront of dealing with people who are suffering under the impact of global climate change, they are also in the business of trying to mitigate that, and they are also in the business of trying to build a moral consensus about the need for the world to address it.

The third area that comes to mind is what we call conflict mitigation. There’s a tremendous amount of interreligious work going on around the globe, aimed at leveraging the better angels of various faith communities’ nature to try and tamp down conflict, and not just religiously driven conflict but all conflict. We’ve met with many groups in the Muslim world and in the non-Muslim world where people are coming together to collectively try to find ways to turn off conflict and build peace.