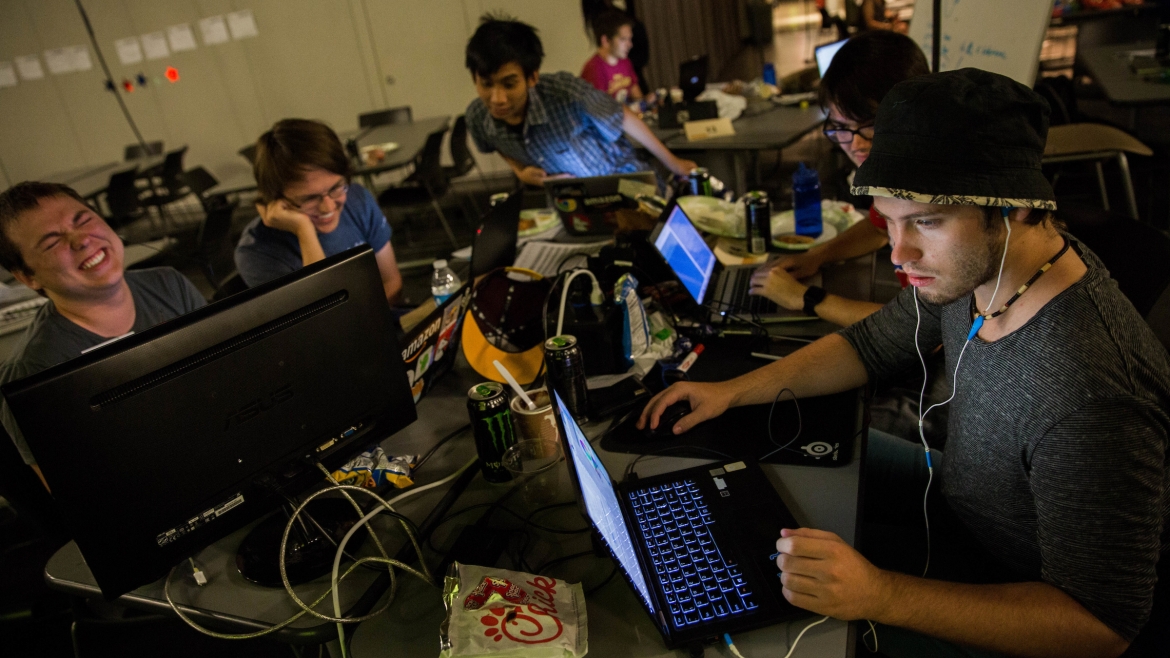 Hacks for Humanity builds its momentum on creativity, kindness

Most teens load up their smartphones with apps.

She got the tools and — more importantly — the inspiration from an Arizona State University initiative that unites the community to create technologies for the social good. 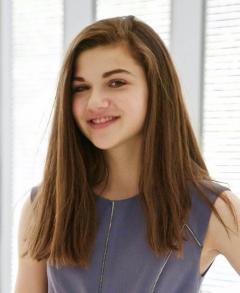 “The event changed my life because it made me realize that the technology I was creating could help others, which is fundamentally the most important attribute when creating an app,” said Sokolov, whose creations range from an innovative travel app to the idea for an app for an Arizona nonprofit that provides weekend food for needy children.

Now attending school in California, Sokolov will return to Arizona to attend the event that continues to inspire her.

Hacks for Humanity, sponsored by ASU’s award-winning Project Humanities, starts at 8 a.m. Saturday, Oct. 8, and ends Sunday late afternoon on Oct. 9 at Stauffer B Building on the ASU Tempe campus.

“Unlike other hackathons, Hacks for Humanity invites people from all walks of life with a wide skill set, even those who have no hacking experience,” said Neal Lester,  professor of English and director of Project Humanities. “We welcome coders and creative, app makers and artists, engineers and entrepreneurs alike, along with each and every person in between. When these diverse perspectives come together, innovation is the exciting result.”

For the past two years, the hackathons have brought together more than 200. This year the number of registered participants has doubled and sponsorships have tripled, according to Lester.

This year State Farm is a major sponsor of the event and will also be scouting for new talent.

“Our mission is to build the State Farm IT talent pipeline of the future,” said Naomi T. Johnson, State Farm’s public affairs specialist. “We accomplish this by building community relationships, engaging students in technology, providing mentorship opportunities and by creating excitement and awareness around IT careers.”

Lester said the excitement and momentum of the event builds each year because their efforts have relevance and potential for immediate impact. The hackathon has inspired technologies such as:

Perhaps the most notable innovation to come out of Hacks for Humanity is ARKHumanity’s web program that connects to the interface of Twitter users who have expressed suicidal thoughts through keywords — for example, “I want to die,” “I’m going to kill myself,” or “I hate my life” and other similar phrases. A crisis counselor could then ascertain if he or she should reach out to the person and offer help.

Team members — Jordan Bates, Ram Polur, BinHong Lee, Kacie McCollum and Pat Pataranutaporn — created the program at the 2014 hackathon and went on to win the $10,000 grand prize at ASU Changemaker Central’s “Innovation Challenge,” as well as $17,500 from the Pakis Social Entrepreneurship Challenge from the W.P. Carey School of Business. Additionally, this group has now formed the non-profit organization Humanity X, which strives to improve humanity through creative, new technologies.

This year some of the members will serve as mentors.

Pataranutaporn said he and three others will co-author a scholarly report on this year’s hackathon, analyzing the working process, design experience and best practices for creating innovation.

“We’ve learned so far that humanity is an important element in technology creation,” Pataranutaporn said.

Top photo: Students from team Ayylmao work into the night during the Hacks for Humanity in Tempe on Oct. 3, 2015. The two-day program features techies, programmers, developers and creative visionaries gathered in one place to hack for the social good and to build technology solutions for the issues facing society. Photo by Deanna Dent/ASU News

The word “mutation” conjures many images, virtually all of them negative. For example, mutations in the human genome cause crippling birth abnormalities and are the source of innumerable genetic diseases, from hemophilia and sickle cell anemia to congenital heart defects and cancer.Mutations, however, are also the engines of change and account for the astonishing diversity of life on Earth. Ov... The word “mutation” conjures many images, virtually all of them negative. For example, mutations in the human genome cause crippling birth abnormalities and are the source of innumerable genetic diseases, from hemophilia and sickle cell anemia to congenital heart defects and cancer.

Mutations, however, are also the engines of change and account for the astonishing diversity of life on Earth. Over time, the process of natural selection acts to retain those mutations that are beneficial to an organism’s fitness — its ability to grow to adulthood and successfully reproduce — while editing out mutations that cause declines in fitness.

This perpetually self-correcting process allows for both the divergence of species into new and unpredictable forms and the ability of species to adapt to changing environments and optimize their chances of survival. And for researchers, teasing out the origins of these changes could aid in treatment in certain disease-associated mutations.

Melissa Wilson Sayres, an evolutionary geneticist affiliated with Arizona State University’s Biodesign Institute, studies rates of mutation in a range of organisms, including humans. Much of her work focuses on the evolutionary contributions of a particular pair of chromosomes: the X and Y.

“This project is driven by trying to understand why the mutation rate is different in genetic males vs. genetic females,” Wilson Sayres said.

The fact that males contribute more genetic mutations than females is a feature of evolution observed not only across mammalian species but in diverse life forms, including birds and fish.

At least part of the secret behind male mutation bias may be found by looking at so-called germline cells — the sperm and egg cells whose DNA combine during conception, beginning the formation of new offspring. It is these germline mutations that are passed to successive generations, enriching species’ genomes with unpredictable genetic novelties.

Each time a germline cell divides, its DNA must be faithfully duplicated in the resulting daughter cell. But the process is imprecise, and errors in the form of mutations can arise, like a word or phrase miscopied from a notebook. The accrual of such mutations is age-dependent. The sperm of a 20-year-old man has undergone roughly 160 chromosome replications, while that of a 40-year-old man has undergone roughly 610.

Because sperm undergo many more cell divisions than eggs do, there is a greater likelihood of mutations derived from sperm entering the genome. This is exactly what has been observed across humans and other mammals.

The study of male mutation bias is critically important for researchers like Wilson Sayres and Narang, as it can help tease out which genetic mutations arise from mistakes in replication and which are replication-independent. Currently, there are more than 100,000 disease-associated mutations in the Human Gene Mutation database (HGMD). As the authors note, it is important for human health to determine the mechanisms underlying these mutations. From a therapeutic standpoint, replication-independent mutations — for example, those due to environmental factors — may be more susceptible to treatment.

Among the 23 chromosomes found in humans, the sex chromosomes are unique for a number of reasons. The most obvious one is that they are responsible for determining whether a child is born genetically male or female. This happens during conception when some 500 million sperm race toward the female egg.

The authors describe a clever technique for identifying differences in the rate of mutations contributed by the two sexes. The strategy requires researchers to determine a quantity known as α — the ratio of male-to-female mutation rates. Finding α can be accomplished by comparing the mutation rates between the two sex chromosomes or the rates between a sex chromosome and the non-sex chromosomes, known as autosomes. The current study follows the latter approach, comparing mutations occurring on the X chromosome with those showing up on the autosomes.

In mammals, the autosomes spend an equal amount of time in males and females, with the two sexes contributing equal shares of mutations. The X chromosome, on the other hand, spends about two-thirds of its time in the female germline and about one-third of its time in the male germline. This allows α to be calculated from the ratio of X-derived mutations to autosome-derived mutations, or X/A.

As the new study reveals, however, this is where things get interesting.

Near and far from genes

Genes are those sections of the DNA that code for particular proteins and are responsible for most of our physical traits. Evolution is fussy about these areas of the genome because they are so vitally important to an organism’s survival. Such sites are evolutionarily conserved, meaning that mutations that adversely affect fitness are edited out over successive generations.

Unsurprisingly, genetic mutations are therefore more common in the DNA regions falling between genes. Here, nature may tamper with sequences in the genome, adding, subtracting or changing the fundamental units or nucleotides, without significant effects to an organism’s health and well-being.

“These regions in between the genes are compared in different species to understand how the species evolved,” Narang said.

Until recently, DNA sites falling between coding genes were assumed to exhibit an equal vulnerability to mutation. Instead, new research shows that mutations increase as the distance from a given gene increases. In practical terms, this means that divergence between related species increases along the genome as one gets further from genes.

This presents a serious problem and accounts for the wide disparity in the calculations of male-to-female mutation rates or α. If the ratio of X-linked and autosome-linked mutations is constantly changing with distance from genes, the estimate of the X to A ratio will also be a moving target.

“The whole take-home of this study is that you have to be really careful about the genetic region you're looking at,” Wilson Sayres said. “You have to get very far from genes in the genome to get a really accurate estimate of how many mutations are coming from genetic mom vs. genetic dad.”

In the past, evolutionary geneticists have been hampered by the paucity of whole genome sequence data across the tree of life, but renewed efforts, driven by advances in technology, are rapidly changing the landscape. Comparative genomes from a wide range of species will soon come online, permitting fine-grained analyses of many biological features and their correlation with mutation rate.

Melissa Wilson-Sayres is an assistant professor in ASU’s School of Life Sciences and a researcher in the Center for Evolution and Medicine.

Top image: Human sperm bearing either an X or a Y chromosome stream toward a human egg, which carries an X chromosome. Fertilization by an X-carrying sperm generally results in a genetic female offspring (XX) while a Y-carrying sperm will lead to a male offspring (XY). Because sperm undergo many more cycles of replication than eggs, more male mutations can become part of the genome — a phenomenon known as male mutation bias. Graphic by Jason Drees/Biodesign Institute