The “Health Conversations” lecture series features in-depth discussions with leading health journalists on important issues and the decision making process behind media coverage. The public talks at the Cronkite School are moderated by Dr. Joseph I. Sirven, a neurologist at the Mayo Clinic’s campus in Arizona who also chairs the Seniors and Seizures Task Force for the Epilepsy Foundation of America. 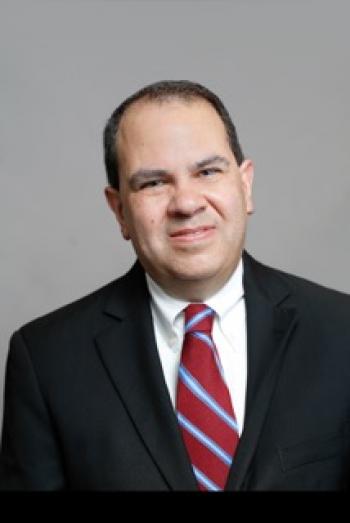 Dr. Joseph I. Sirven, a neurologist at the Mayo Clinic’s campus in Arizona, leads discussions with leading health journalists and communicators as part of the new “Health Conversations” lecture series between the Mayo Clinic and ASU's Cronkite School. Download Full Image

The first discussion kicks off Tuesday, Nov. 1, with a talk on coverage of Alzheimer’s disease with Dr. Orly Avitzur, medical director of Consumer Reports Health and editor-in-chief of Neurology Now. All speakers will chat with Sirven and the audience via a live video feed.

In February, Harriet Ryan, legal affairs correspondent at the Los Angeles Times, examines the heroin and opioid epidemic. The lecture series concludes in April with a talk on media coverage of cancer research with Gina Kolata, science correspondent at The New York Times.

“Quality journalism is critical in helping the public make informed decisions about their health,” said Christopher Callahan, dean of the Cronkite School. “We are thrilled to be partnering with the Mayo Clinic to create a forum for ASU and the community that bridges the gap between journalists and medical professionals.”

Sirven, who collaborated with Sylvester on a 2006 study analyzing the media’s coverage of neurological diseases, said the “Health Conversations” lecture series aims to go beyond the headlines to examine what makes news in medicine.

“Ed and I worked on how we could put doctors, health professionals and journalists in the same room,” Sirven said. “We’re all trying to accomplish the same thing and that’s the general improvement of public health. When Ed passed away, I wanted to take up his torch and work on this lecture series because he was so passionate about it.”

The talks, open to the public, are located in the First Amendment Forum at the Cronkite School on the ASU Downtown Phoenix campus.

Alzheimer’s disease is one of the leading causes of death in the U.S., yet it is often overshadowed in media coverage by cancer and other disorders. Dr. Orly Avitzur, medical director of Consumer Reports Health and editor-in-chief of Neurology Now, digs to the root of problem, discussing this important health issue.

“The Truth Behind Cancer Breakthroughs”

Cancer research is heavily covered by the media and promoted by advocacy groups, but it’s sometimes difficult to determine the true impact of cancer breakthroughs. Gina Kolata, science correspondent at The New York Times, explores the media’s role in covering medical studies and how journalists can improve coverage.

Through funding provided by the Rob and Melani Walton Fund of the Walton Family Foundation, Arizona State University will award a limited number of scholarships of up to $15,000 to professionals applying to the Executive Master of Sustainability Leadership (EMSL) program. The admissions application deadline for those who wish to be considered for this scholarship is Nov. 30.The online program, off...

Through funding provided by the Rob and Melani Walton Fund of the Walton Family Foundation, Arizona State University will award a limited number of scholarships of up to $15,000 to professionals applying to the Executive Master of Sustainability Leadership (EMSL) program. The admissions application deadline for those who wish to be considered for this scholarship is Nov. 30.

The online program, offered by the ASU School of Sustainability and administered through the ASU Walton Sustainability Solutions Initiatives, equips professionals from all ranks within an organization with the knowledge and real-world experiences needed to accelerate their careers in sustainability. 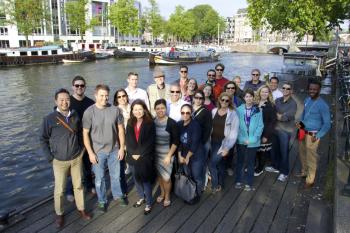 ASU Executive Master of Sustainability Leadership Class of 2016 during their week-long international immersive in The Netherlands. Download Full Image

The next cohort begins in January 2017 and integrates three in-person workshops with the online learning experience, including a weeklong international immersive in The Netherlands, where students have the opportunity to connect with an elite network of sustainability experts and leaders.

“This Executive Master program was created to fill a leadership gap, equipping students with the skills they needed to lead their organization’s success using sustainability as a core driver,” said George Basile, EMSL professor and Senior Sustainability Scientist at the Julie Ann Wrigley Global Institute of Sustainability. “At the core of this program is transformation – in both our students and the organizations they go on to advance through sustainability practice.”

“EMSL strikes the correct balance between traditional academics, online learning and in-person immersive sessions,” said Jamie Cook, 2016 EMSL graduate and director of Renewable Energy Projects for Maui Electric in Hawaii. “EMSL has given me the knowledge, connections and confidence to my career to new heights.”

To be considered for the 2017 cohort and scholarship, applicants must submit a full application, including an answer to the scholarship essay question, by Nov. 30. Scholarship recipients will be selected based on their complete application after their admission to the program.