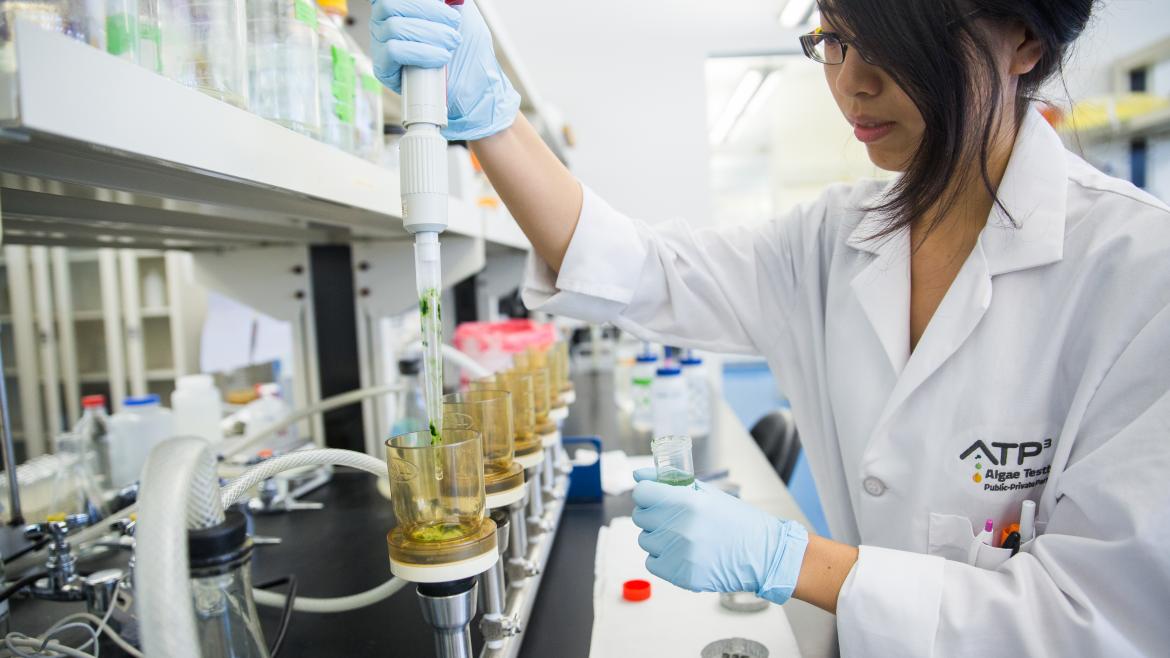 From its beginning as a former military base, ASU's southeast location bloomed into the 'maker' campus with a startup mentality

College campuses are traditionally the personification of stability: serene grounds, the life of the mind, the scratch of pen on paper.

They don’t necessarily begin that way.

Twenty years ago, the birth of Arizona State University’s Polytechnic campus in Mesa was wrought with determination, trepidation and some amount of desperation.

Inaugural Provost Charles Backus stood in front of the first faculty and staff meeting at the start of the fall 1996 semester at what began as ASU East.

“We know we are launching a new campus for a new century, but in the excitement of doing business in a new way, let’s also be realistic,” Backus said. “We have wonderful facilities on this campus; however, not many of them are open yet. Students will notice that.

“We have swimming pools with no water,” he continued. “We have a child-care center whose doors are closed for now. We have an officers’ club that would be perfect for a student union, but no funding to open it yet. … What we don’t have in resources we will make up for in eye contact, in first-quality teaching and in one-on-one service. What we don’t have covered in this startup phase, we will make up for in student advocacy.”

That was the beginning of what’s now called the "maker" campus. Classes are hands-on and project-based, taught in labs, workshops and studios, rather than only in typical classrooms and lecture halls. Polytechnic grads fly planes, manage industrial farms, clean up soil pollution, design technology that works for people, print complex graphics and build robots, among scores of other technical professions. 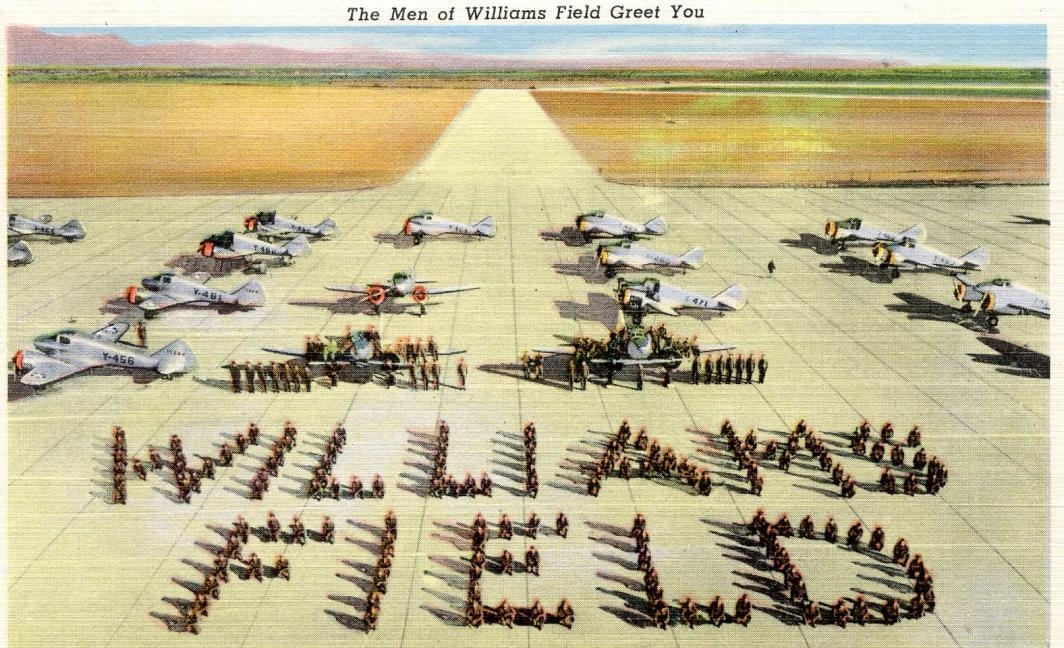 Williams Air Force Base began in 1941. A promotional brochure noted "The men of Williams Field greet you." 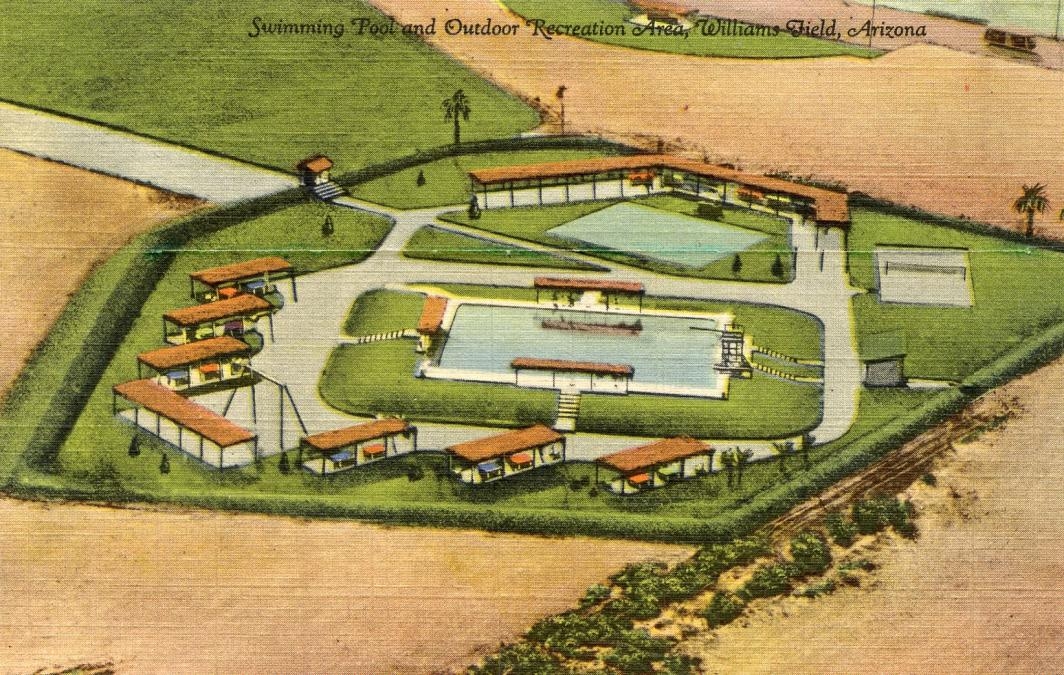 The base's amenities included a swimming pool and an outdoor recreation area. 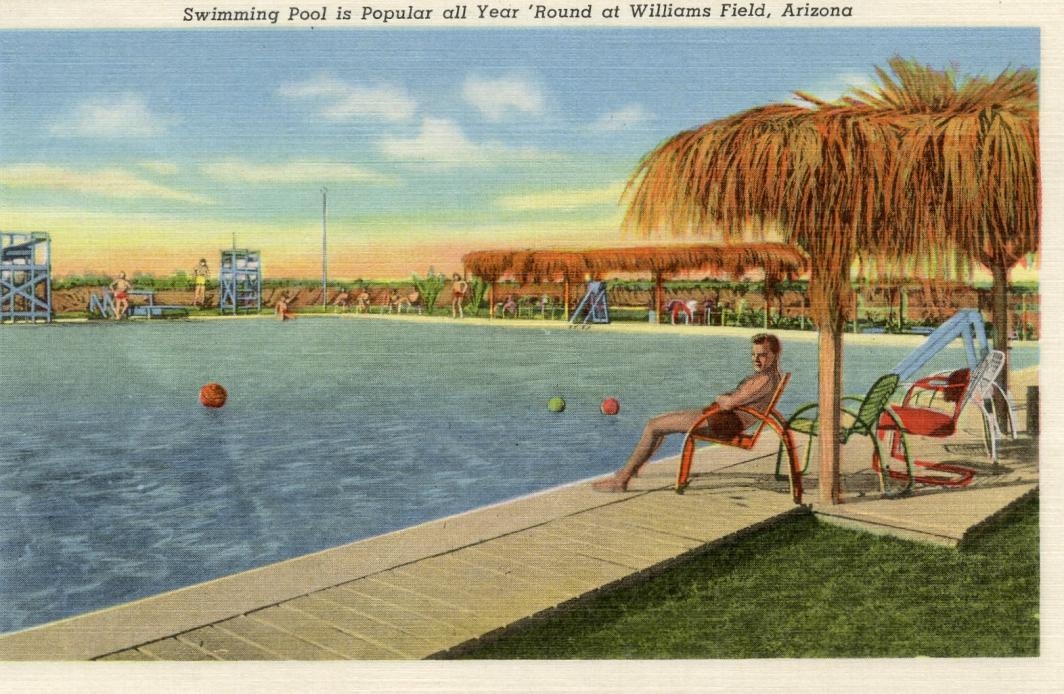 The brochure said the "swimming pool is popular all year 'round at Williams Field, Arizona." 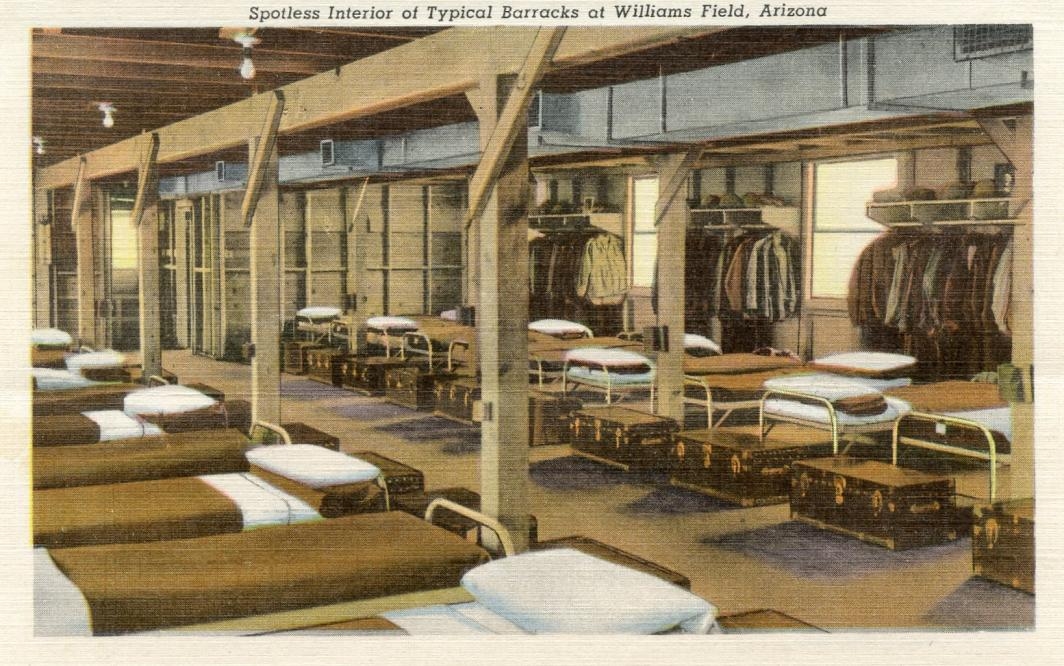 The airmen lived in the "spotless interior of typical barracks at Williams Field, Arizona."

“He hit it right on the mark with that,” said Roen, campus vice provost and dean of the College of Integrative Sciences and Arts. “Students, faculty and staff are all fiercely proud of the campus and fiercely loyal to it. … It grows out of the beginning of that campus 20 years ago, when the campus had pretty minimal resources to get started, so people made things happen on a shoestring budget back then, and people worked together.”

Talk to Polytechnic folks, and there’s a band-of-brothers bond between them, coming from creating a campus with a distinctive personality out of Williams, a rundown former Air Force base in the middle of farm fields.

“There are two components to that: recognition that we are a startup, and that despite that, we’re going to make it work,” said Ann McKenna, director of the Polytechnic School in the Ira A. Fulton Schools of Engineering. “We still have that persistence in terms of we believe in this place, and it’s a great place, and we will continue to make it work in that regard.”

Six colleges call the Polytechnic campus home: the College of Integrative Sciences and Arts; the Ira A. Fulton Schools of Engineering; the Mary Lou Fulton Teachers College; Barrett, the Honors College; and the W. P. Carey School of Business.

Other schools also have a presence on the campus, and they’re growing. Sustainability launched a BA and BS this fall.

Together they offer about 100 majors, minors and certificates; “a pretty good array,” Roen called it.

When a recruiter for one college goes out to a high school, they’ll take recruiting materials from all the colleges at Polytechnic.

“The colleges at Poly work very close together,” Roen said. “It’s the most cooperative group you’ll ever find in your life.”

Every Friday afternoon in the summer there is an ice cream social, where all faculty, staff and students are invited.

The Polytechnic campus boasts a tight-knit community. For example, faculty, staff and students gather for an ice cream social every Friday in the summers. On Friday, the campus will host a breakfast celebration with a number of the early campus leaders and community partners in attendance, and a yearlong lecture series will celebrate the achievements of its alumni.

“It’s led to a more collaborative spirit, if you will,” she said. “It’s normal and natural for the different colleges to work together, to help each other out. It’s that collaborative nature that’s distinctive of the Poly campus. That’s how it started: We have to work together to make it work.”

The "maker" campus appellation is justified. A list of labs goes on and on: a robotics lab, a photovoltaics reliability lab, engineering design studios, flight simulators, human systems engineering labs, manufacturing labs, the algae farm and labs. Those are just a few. Faculty like to think of the campus theme as being actively engaged, whether it’s with or without tools in hand.

“Absolutely,” McKenna said. “If you go into the technology center on the Polytechnic campus, for example, and you go into the innovation space there, there are 3-D printers and that kind of technology, cutting-edge technology. If you go in there in the afternoon especially, it’s just humming with students working on their projects. It’s so inspiring.”

It’s rare for students anywhere to have access to the kind of technology Polytechnic boasts.

“I think on the campus in the last five years there’s been a lot of push to build maker spaces, startup labs available to students, to allow them to play with technology they wouldn’t otherwise get to play with,” said Darryl Morrell, program chair of the Engineering and Manufacturing Engineering programs.

He pointed to the Polytechnic Society of Automotive Engineers' Baja group, who build and race off-road vehicles.

“They’re building their vehicles here completely from scratch, and we’ve got the facilities here to do that,” Morrell said.

Both engineering programs at Polytechnic are — unsurprisingly — focused on hands-on learning. They learn by doing. Students are required to do a project every semester. That’s not the way engineering disciplines typically work.

“It would have been quite difficult to implement in Tempe, where there’s a particular way of seeing how engineering is done,” Morrell said. “Out here, at the time, we had the engineering technology programs, which were more hands-on. I think that gave us a better fit on this campus than we would have seen in Tempe. That was one of the things that was quite a bit different being here, hidden away from the rest of the university scrutiny for a while, gave us the opportunity to do. … Being on this campus with having the more hands-on approach to it has made it much easier to do a hands-on engineering program.”

“It’s bringing together all of the expertise that exists here in meaningful ways,” she said. “We’re thinking about complex problems facing the world today. We have to integrate all of our expertise to come up with viable solutions. … It’s very applied. … Let’s work together to figure out a solution that has value right away.”

“One of the most interesting things is there’s a solid spirit of collegiality among the academic units here at Poly,” Manfredo said.

Together with the Mary Lou Fulton Teachers College, he has created a degree combining a BA in global agribusiness with a minor in educational studies. Grads will be able to become vocational agricultural teachers or advisers to Future Farmers of America.

Another new degree is an accelerated program integrating a BA in global agribusiness with an MS in environmental and resource management.

“We think this has the potential to attract a different type of student who is interested in business and the sciences of environmental and resource management,” Manfredo said.

From concrete to Sonoran oasis

Military bases aren’t renowned for their beauty, and Williams was no exception when ASU took possession. Transforming a bleak, down-at-the-heels facility into a pleasant campus took considerable doing. Fourteen acres of asphalt and concrete were removed. A major asphalt street that flooded during rains was transformed into a permeable, water-harvesting arroyo.

“Ten years ago it didn’t look very attractive out there,” Roen said. “Now it looks like a beautiful college campus. The vegetation has matured.” 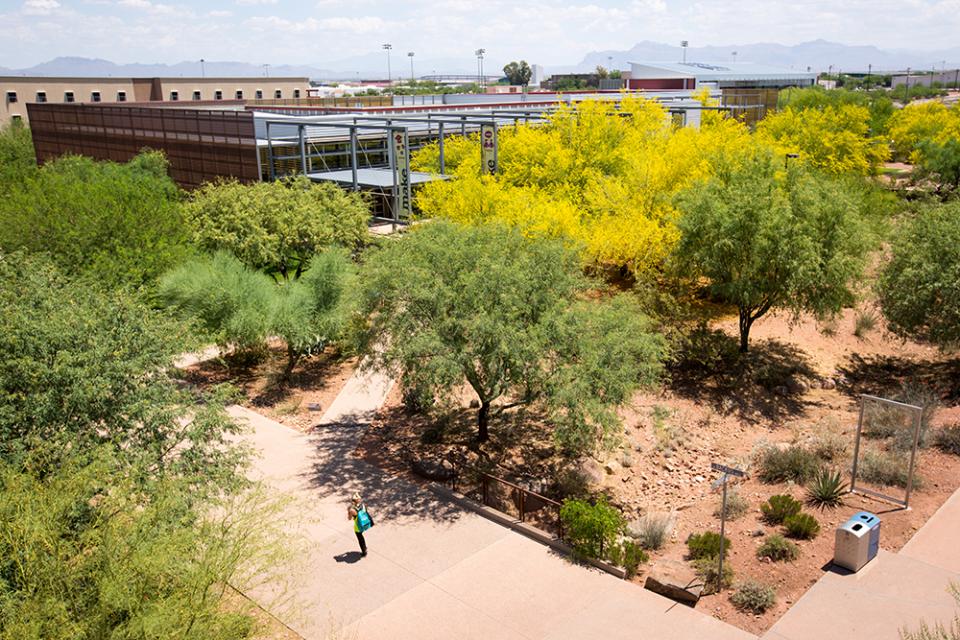 Palo verde trees and other vegetation surround the Student Union on the Polytechnic campus in Mesa.

Families of quail dart beneath the palo verde trees. A skunk was sighted cruising the wash by the Student Union on the first day of class this semester.

The landscaping won an award in 2012 from the American Society of Landscape Architects.

“It’s a new campus and new kind of architecture that is also consistent and it works,” the awards jury said in a statement. “It doesn’t feel institutional; it’s kind of rough and tumble like the desert. It has a great planting strategy that takes the scale of the campus and makes it comfortable to walk around during the day. Those trees are amazing and give color and excitement to the campus.”

It has a small-campus feel, Morrell said.

“The way the campus is landscaped, there’s a lot of things that go into making it feel quieter and more peaceful,” he said. “You don’t see the ocean (of people) here. There’s plenty of kids going back and forth, but it’s not like the masses of people (you see in Tempe).”

Enrollment in 1996 was 1,016. This fall it’s 4,456. Full-time faculty have grown from 50 to 207. The campus grows every year. More partnerships with industry, beefing up research activity and building out the campus are in the immediate future, according to McKenna.

“We’re going to have more opportunities for students,” Roen said.

The biggest news for Polytechnic’s future is a 300-acre research park / live-work-play development / learning space. People will live, learn, recreate and demonstrate sustainable technologies for living in arid regions. It will be open to the public.

It’s in the spitballing stage (collecting ideas began just a few months ago) and therefore a bit unclear, but think of a combination between a campus, a research park, a living lab, and live-work-play developments.

“It’ll be a combination of things,” Roen said. “It won’t have a single focus.”

Part of the focus will be on the nexus of water, food and energy.

The project will be built on the south side of campus, where the South Desert Village exists now. Expanding the existing urban garden will be part of the plan. Algae will be involved, as will robotics, horticulture and applied biology.

“Poly is the perfect place to demonstrate sustainable practices,” Roen said. “We really have come a long way in 20 years. It’s exciting.”

Sun Devils win all three doubles matches and 9 of 12 in singles on Friday ...