Big data is everywhere, including in research. Rather than writing data into a lab notebook, many researchers today use large amounts of digital data in their research to shape it and to refine their work, oftentimes using computer models to run simulations on their data. In essence, today’s research relies heavily on the movement and manipulation of data.

With that in mind, the National Science Foundation announced the formation of 10 new centers (called Big Data Spokes) to initiate research into specific areas identified, supported and organized by NSF’s Big Data Regional Innovation Hubs. Arizona State University is leading one of these new centers. 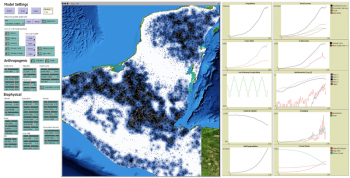 Simulations can make sense of data. A new NSF-sponsored center at Arizona State University will establish a next-generation, online Computational Model Library that will be geared toward researchers working in the social-ecological sciences. Download Full Image

The new ASU center, which is based on the existing research Network for Computational Modeling in the Social and Ecological Sciences (CoMSES Net), will establish a next-generation, online Computational Model Library that would be geared for researchers working in the social-ecological sciences. Researchers working in this area focus on the way humans interact with the environment.

According to Michael Barton, a professor in ASU’s School of Human Evolution and Social Change and lead for the new ASU center, it will help make scientific computation and data science more transparent and accessible, and it will help accelerate the research.

“Computational thinking is increasingly important for many fields today and will be more so in the future,” he said. “We are making it easier for people to learn and share knowledge about computation. The most important, long-term value of CoMSES Net is better science, and especially for science related to human life and well-being.”

“The most direct beneficiaries of this facility will be people who are using computation (e.g., models) to understand human behavior and ecosystems,” he added. “That includes researchers, but also others who need to better understand how these systems work like, planners and policy makers in local and regional governance or NGOs. The facility will also be used for education.”

The ASU center will fill a need for researchers who share models and improve upon them, as well as share large digital databases. The new $1 million NSF grant will allow CoMSES Net to expand this environment to make it possible for scientists to share entire research workflows.

“This will improve science, and especially sciences needed to help us understand and manage our planet,” he said. “It will make scientific practice and its products transparent to all — the general public as well as other scientists. Science that is transparently vetted and open to public scrutiny engenders more confidence in scientific knowledge and helps to build a better understanding of scientific practice among the general public that supports research.”

Barton will lead the center and will be assisted by Marco Janssen of the School of Sustainability, Allen Lee of the Center for Behavior, Institutions and the Environment, and Ken Buetow, director and professor of Computational Sciences  and Informatics.

“Understanding stuff” could be a broad phrase to describe what many scientists and researchers do, but Peter Crozier takes the art of understanding to another level — specifically, the atomic level.He specializes in materials characterization: analyzing the fundamental properties and structure of a given material.To investigate these fundamental properties, Crozier, an associate professor o...

“Understanding stuff” could be a broad phrase to describe what many scientists and researchers do, but Peter Crozier takes the art of understanding to another level — specifically, the atomic level.

He specializes in materials characterization: analyzing the fundamental properties and structure of a given material. 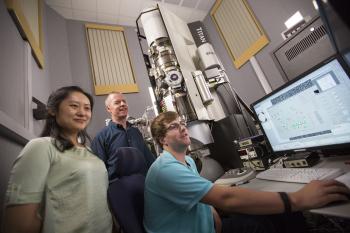 Peter Crozier (center), an associate professor of materials science and engineering, uses transmission electron microscopy to investigate the fundamental properties and structure of a given material. Crozier, along with doctoral students Quinlang Lui and Ethan Lawrence, uses this process to beam electrons through an ultra-thin sample to observe an image of the atoms in the material for analysis. Photo by Jessica Hochreiter/ASU Download Full Image

To investigate these fundamental properties, Crozier, an associate professor of materials science and engineering at Arizona State University, uses transmission electron microscopy (TEM). This process beams electrons through an ultra-thin sample and observes the material’s interaction with the particles, which can produce an image of the atoms in the sample. The image can be magnified and focused, providing a close-up look at the sample’s atomic structure.

“TEM gives you a high-resolution image of a structure, right down to the atoms,” said Crozier, who heads the Electron Microscopy for Energy and the Environment Group. “It allows us to figure out not only the atomic structure, but what happens when you put two different materials together and observe how they interact.”

But traditional TEM cannot observe all interactions. It’s a delicate process, requiring the length of the microscope to be vacuum-sealed, as any environmental effects — temperature, gases — can disrupt the imaging. This means materials must be viewed in an isolated state.

“That’s not particularly helpful when you want to truly characterize a working material,” said Crozier. “We don’t want to just look at the static state of a structure, but the dynamic fluctuation in the structure.”

To achieve this, Crozier uses in situ TEM, which makes use of a miniature, curated environment that allows researchers to look at a material in its working state, affected by the forces surrounding it. Most of the microscope remains vacuum-sealed so electrons can pass through easily, and the simulated environment is created using reaction cells, which are thin layers on either side of the sample that won’t interfere with the electron imaging.

“Viewing the results of the sample in this way is called in situ characterization, allowing us to measure the stimuli as well as the change in the material,” Crozier said

But even with a vacuum-sealed microscope, TEM remains a sensitive process. The devices housed at ASU’s LeRoy Eyring Center For Solid State Science all reside in climate-controlled, acoustic-dampened rooms. The entire building itself acts as a Faraday cage, meaning it screens out electromagnetic and electrostatic interference. When the Phoenix Valley Metro light rail was under construction, the initial route was altered to steer clear of the facility, as the electromagnetism would have disrupted a number of the sensitive instruments.

Crozier’s work is not simply in pursuit of understanding the materials that constitute the world around us. Much of the work coming out of Crozier’s research group is in the service of improving energy conversion technology.

One area of focus is the chemical energy conversion of solid oxide fuel cells. Though a potentially promising method for converting energy stored in chemical fuels into electricity, these devices are costly and lack sustained stability due to their high-temperature operation.

With the aid of a four-year, $520,000 grant from the National Science Foundation, Crozier is investigating the fundamental properties and interactions of oxide fuel cells at an atomic level. The goal is to use the knowledge gained from these studies to create novel materials capable of sustainably operating oxide fuel cells at lower temperatures.

In addition to energy conversion, materials characterization benefits many other engineering disciplines overall.

“Once you understand the fundamental structures and dynamics of a given material, you can then engineer new materials to meet a specific engineering function,” Crozier said.

For instance, a mechanical engineer building an engine is going to use materials that must be understood and tested with other materials, just as an electrical engineer developing silicon solar panels must understand how that material responds to different environmental stimuli, Crozier said.

In support of these pursuits, Crozier has received numerous grants to expand the understanding of materials and their inherent properties.

In September 2015, Crozier and physics professor Peter Rez were awarded a $450,000 grant for an estimated three years to develop a tool to probe the nanoscale chemistry of materials surfaces. The award, also from the NSF, funds efforts to understand the fundamental interactions of nanoparticles and their influence on their environment. According to the award’s abstract, this research could have “wide applications in many fields where nanoparticle surfaces are important, including catalysis, sensors and the life sciences.”

Crozier also uses material characterization techniques to address environmental challenges. In the past, he’s investigated the optical properties of carbonaceous aerosols and how they contribute to climate change. Formed in combustion processes, carbonaceous aerosols can absorb light, consequently heating the atmosphere and contributing to global warming. However, their properties are not well enough defined to be effectively incorporated into climate change models.

“It’s well established and understood that greenhouse gases affect global warming, but there is a lot of uncertainty about carbonaceous aerosols,” Crozier said.

Training the next generation of materials scientists

In 2015, energy storage and power delivery company Maxwell Technologies granted Crozier and Graduate Program Chair and Professor Terry Alford a $345,000 award to train students to use materials characterization tools. These funds have supported Crozier’s group hiring student researchers and teaching them the intricacies of materials characterization for supercapacitors.

Diane Haiber, a materials science and engineering doctoral student, was initially drawn to the research group’s array of equipment and the expertise required to operate them.

“I’ve done a lot of characterization that is pretty straightforward,” said Haiber. “TEM is a much more involved process. You don’t master TEM overnight, if you do at all.”

Much of doctoral student Qianlang Liu’s work revolves around investigating photocatalytic materials used in water splitting and her contributions to the group’s TEM capabilities include the development of an in situ illumination system.

Crozier’s group employs three undergraduates and eight doctoral researchers, all of whom are contributing to ongoing materials characterization research.