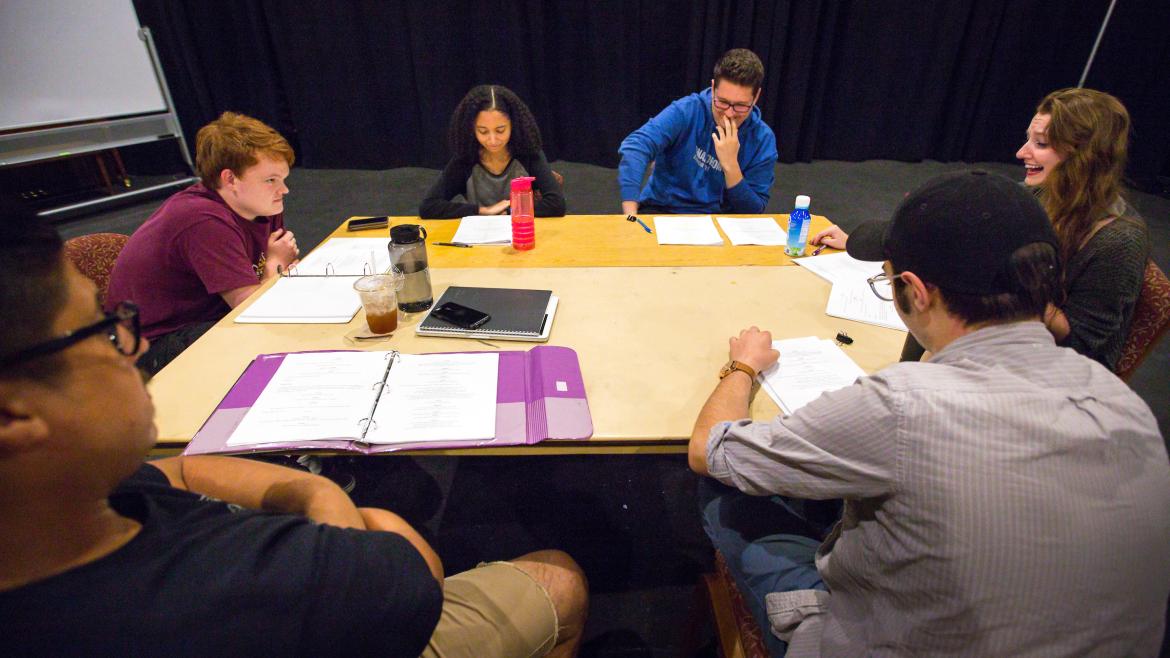 Building chemistry among a new cast

At the first read-through of 'Feathers and Teeth,' laughter reigns; meet the cast here, from 17-year-old rookie to seasoned senior

Editor's note: This is the second installment of a semester-long series following the production of "Feathers and Teeth" from casting call to wrap party.

The play’s subject matter touches on sensitive themes such as grief, love and the supernatural, but on the first read-through with the new cast members, they just couldn’t stop laughing.

It’s not that they’re heartless or insensitive, but this is a table reading — and for a horror-comedy, at that. At a read-through, actors gather around a table to read a script aloud, giving the director an idea of what the final production will sound like.

And so far, the director liked what he heard.

“I selected this particular cast because of the way they worked together, the way they took direction together in the callbacks,” said Ricky Araiza, the director of “Feathers and Teeth,”“Feathers and Teeth” is a retro comedy-thriller. The plot follows Chris, a 13-year-old who suspects foul play when her father hooks up with an attractive home-care nurse two months after the death of her mother, Ellie. Set in a Rust Belt factory town in 1978, the play combines the supernatural with classic rock, family dysfunction and gremlin-like creatures that roam the house’s crawl space. an upcoming play that will debut in Tempe on Oct. 28.

“Acting is all about chemistry and combinations.” 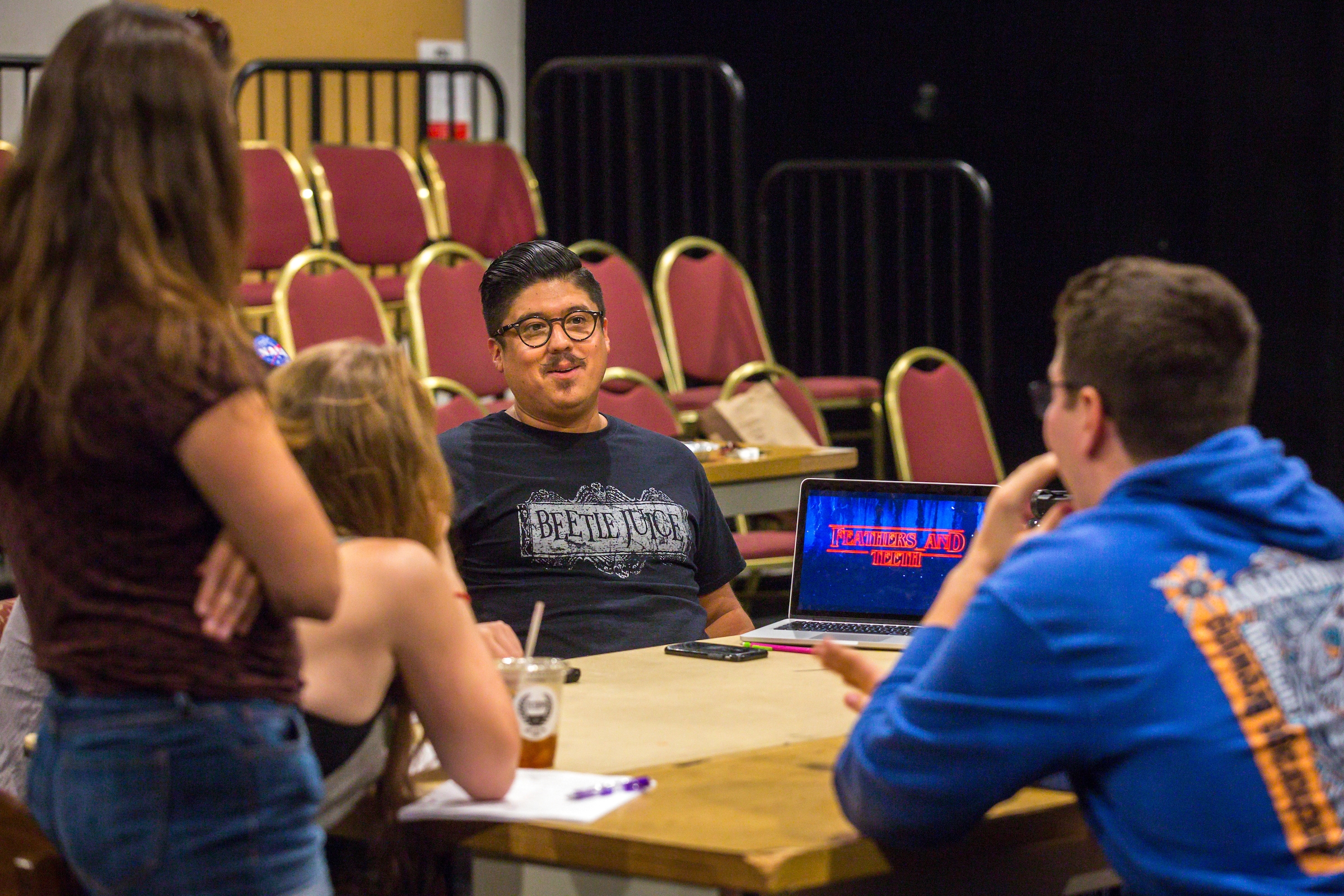 Director Ricky Araiza (center) introduces his vision of "Feathers and Teeth" at the start of the first read-through of the play Sept. 15 in Tempe. 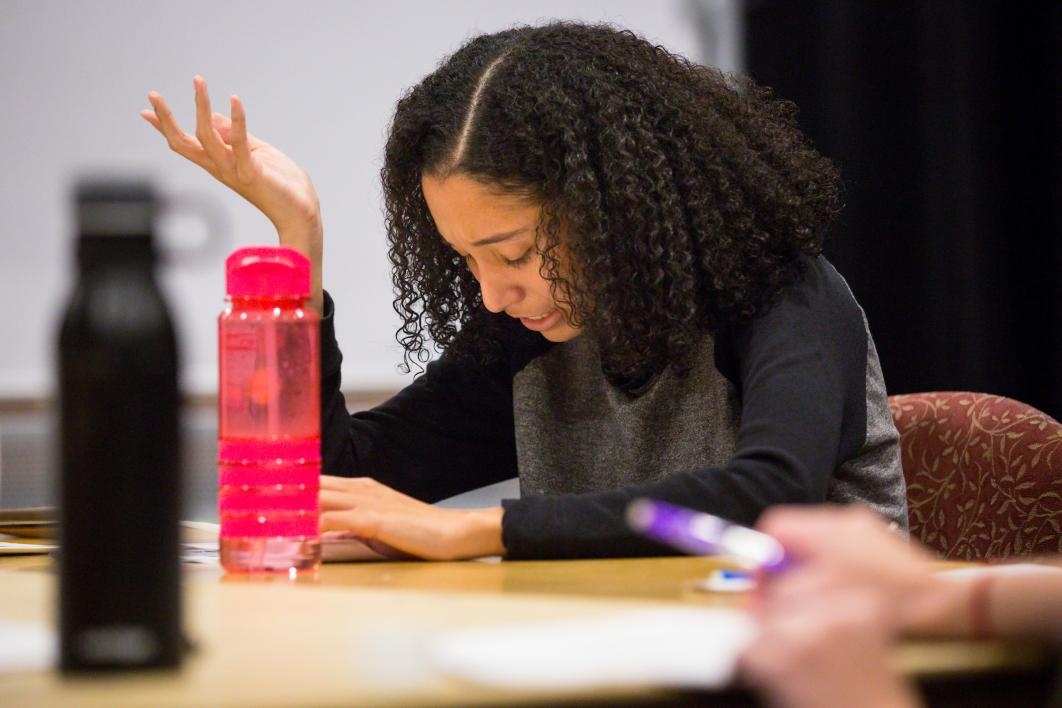 Maria Harris — who plays Chris — reads with frustration as her character's recently widowed father is about to get married, during the first read-through at the Nelson Fine Arts Center. Harris is a freshman in theater. 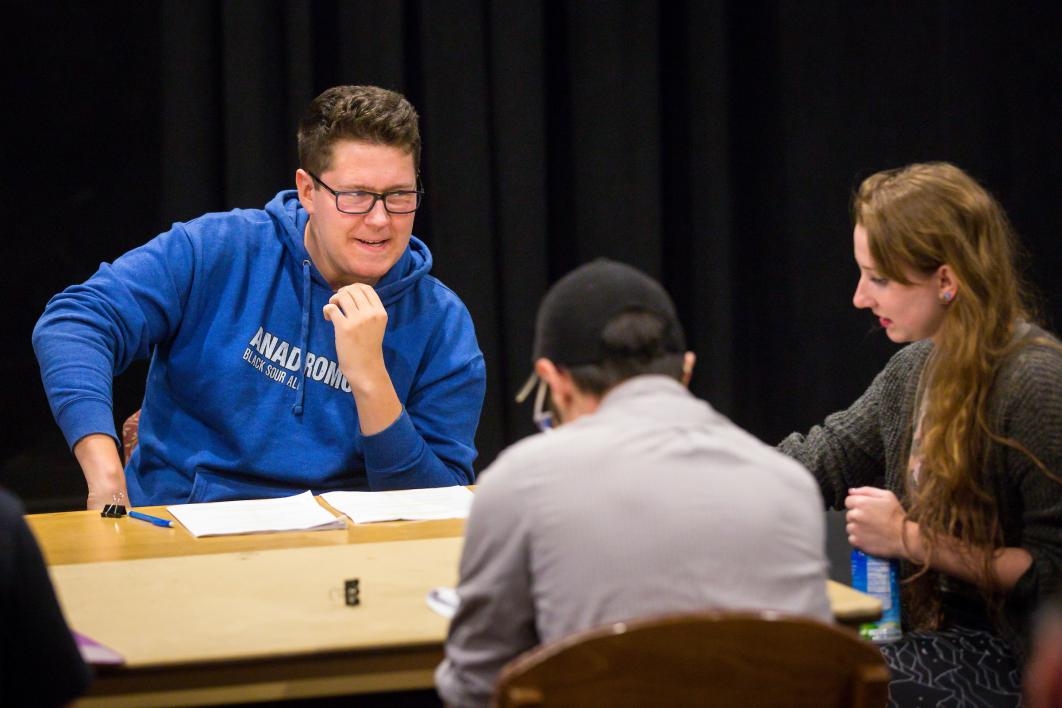 Evan Carson (Arthur, left) acts a line directed to his character's fiancee Thursday evening in Tempe. Carson is a senior in theater. Tess Galbiati (Carol) responds to being given a necklace during the first "Feathers and Teeth" read-through. She is a senior in theater. 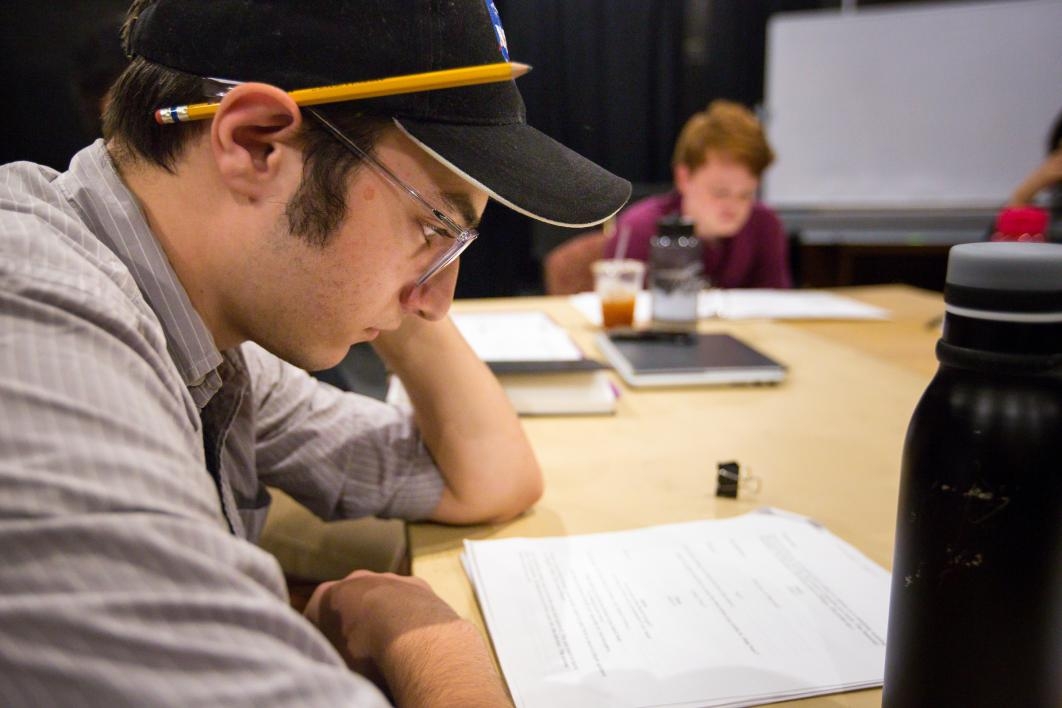 Fargo Tbakhi (Hugo) follows the script at the read-through Sept. 15. Tbakhi — who will play an 11-year-old German boy — is a sophomore in theater.

Araiza is a third-year master of fine arts student in Arizona State University’s School of Film, Dance and TheatreASU’s School of Film, Dance and Theatre is a unit of the Herberger Institute for Design and the Arts.. The play will serve as the equivalent of Araiza’s master’s thesis. He has about six weeks left to prepare the production, which was written by Charise Castro Smith in 2013.

After screening close to 75 actors amid an audition process that rivaled the most cringe-worthy early-season episodes of “American Idol,” Araiza has selected his final cast.

He chose them because of their potential for group chemistry — a family, rather than just a group. The cast members, who will be working together every weekday until the performance, range from a 17-year-old rookie to a seasoned theater senior.

A 17-year-old freshman theater major who auditioned for the experience and ended up getting the part. She’ll play the lead character, Chris, a sullen but sardonic teenager who is grieving the recent loss of her mother. Chris suspects her mother’s hospice nurse, who is dating her father, of foul play.

On what attracted her to the play: “It read like a dark comedy, and I’ve always loved that type of humor. It was funny and horrible but has a heart behind it.”

On her rookie status: “I’m still so excited because this is my first play, and I have the butterflies to prove it.”

A 22-year-old theater senior who gave a stiff reading in his audition, but as it turns out, it was an act. That’s exactly what his character, Arthur, is — a higher-up at the town's factory, but not the highest-up. Two months after his wife’s death, he is seeing the hospice nurse who took care of her and will do anything to keep the family, including daughter Chris, together.

On what attracted him to the play: “It’s like appearing in this sitcom home of ‘The Brady Bunch,’ and then it elevates into these really dark and intimate moments.”

What he wants to learn about his character in the coming weeks: “I need to find out what it is about Carol that he loves. What’s his relationship with her and the power dynamic between how much he loves Carol to how much he loves his daughter, Chris.”

A 20-year-old senior in the School of Film, Dance and Theatre who charmed everyone in her audition when she pulled out a ukulele and strummed a tongue-in-cheek version of “All of Me.” Described as “Carol Brady on speedballs,” Galbiati has the play’s scene-stealing part.

On what attracted her to the play: “I am still struggling with the interpretation of my character, Carol, but what I love is her black and white flipping between being Ms. Absolute Sweetheart and turning into this demonic presence.”

What she got from the table read: “A lot more perspective but a lot more questions. There’s this constant questioning of how honest Carol is being, and even reading through her part, I’m still not sure.”

A 19-year-old theater major who will have to be the most convincing actor: He’ll play Hugo, an 11-year-old transplant from Germany who befriends Chris. The script will require him to play the part with a thick accent. He is so convincing, however, that you can’t help but wonder if he’ll sport lederhosen onstage.

On what attracted him to the play: “When I initially read it, my thought was that it was so insane and cool. Even though it has horror and comedy trappings, it has a tragic story.”

How he hopes audiences will react: “I hope that they will be terrified and also heartbroken. They’re often closely related.”

Cast member Kyra Jackson was not present at the Sept. 15 table read, but will provide the voice of Ellie in the productions of “Feathers and Teeth.” Top photo: (clockwise from lower left) Director Ricky Araiza, stage manager Ben Vining, Maria Harris (Chris), Evan Carson (Arthur), Tess Galbiati (Carol) and Fargo Tbakhi (Hugo) go through lines at the first read-through of "Feathers and Teeth" at the Nelson Fine Arts Center on the evening of Sept. 15. Photo by Charlie Leight/ASU Now

Colleen Jennings-Roggensack, executive director for ASU Gammage and ASU MLK Jr. Committee Chair, is soliciting nominations for the 2017 ASU MLK Jr. Student Servant-Leadership Award. This year’s theme is "Be the Face of Change."

The ASU MLK Jr. Committee will present a Servant-Leadership Award to an ASU student at the MLK breakfast on Jan. 19, 2017 at the ASU Polytechnic campus. 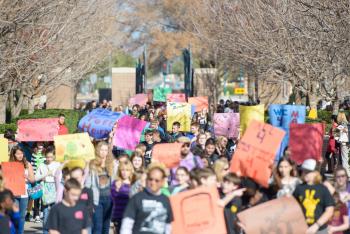 Servant-leadership is a practical philosophy, which supports people who choose to serve first, and then lead as a way of expanding service to individuals and institutions. Servant leaders may or may not hold formal leadership positions. Servant-leadership encourages collaboration, trust, foresight, listening and the ethical use of power and empowerment.

ASU Gammage requests help in identifying a student servant-leadership awardee. The student must be currently enrolled full-time, exemplify the ideals of servant-leadership and have a track record of commitment through volunteer service. Candidates may submit his or her resume with this form. Letters of recommendation are acceptable, but no more than two. Self-nominations are encouraged.

The ASU MLK Jr. Committee will provide a $1,500 scholarship to the awardee to be used towards his or her educational costs. This scholarship is available to ASU full-time undergraduate or graduate students. The winner must be a full-time student during the spring 2017 semester.