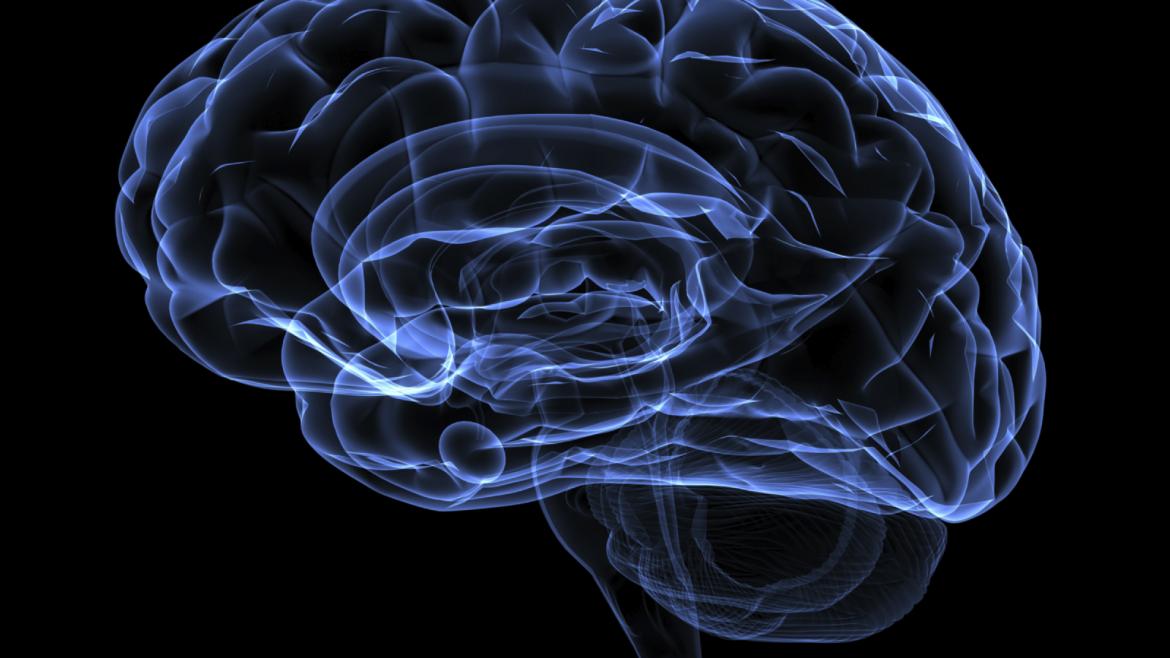 Important ethical and legal questions are coming up with the rapid expansion of neuroscience and neurotechnology: Among them, how far is too far when it comes to science and the human brain?

New developments could lead to cures and treatments for diseases such as Alzheimer’s, but what about technology that could limit individual freedom by controlling behavior? Then there’s the matter of who will have access to brain-enhancement technologies and who owns data connected to brain-computer interfaces?

To dig into these and other issues, the international think-tank Organization for Economic Co-operation and Development, is bringing together leaders for a two-day conference in Washington, D.C., starting today.

Arizona State University professor Diana Bowman has been involved as a member of the steering committee for “Neurotechnology and Society: Strengthening Responsible Innovation in Brain Science,” which organizers say intends to advance the understanding and development of innovations in brain science and technology.

Bowman, associate professor in the School for the Future of Innovation in Society and the Sandra Day O’Connor College of Law, and other leaders hope the discussion will provide clarity regarding the direction of research, its social and economic influence and the regulatory frameworks that will develop.

She spoke with ASU Now about what she expects from the conference. 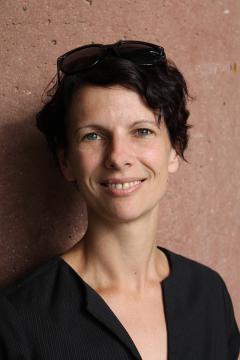 Question: What could go wrong if research and development in brain science goes unchecked?

Answer: The human brain is considered the last frontier for medical research; its complexity, and importance to defining the individual self, has ensured that the brain has received substantial attention from scientists, physicians, philosophers and ethicists alike.

Large-scale investment into brain research by the public and private sectors promises to unlock new therapies and novel approaches for treating costly illnesses and disease including, for example, dementia, Alzheimer’s and traumatic brain injuries.

But as we begin to unlock, and better understand, how the human brain functions there is the potential for abuse, or for ethical and legal concerns to go unchecked. Think Minority Report. Think functional magnetic resonance imaging of criminals, in an effort to predict impulsivity and recidivism and where such approaches to preventing criminal activities, and potentially limiting freedom in order to prevent crime, could infringe fundamental human rights.

Q: How have we gotten to this point? And what ethical dilemmas have come up, so far?

A: Different technologies and their applications are already giving rise to a myriad of ethical and moral dilemmas.

Of these, some of the most pressing related to human enhancement and the ways and extent to which we should pursue human enhancement technologies: Do the benefits of invasive neuromodulation outweigh potential risks? And what are the privacy and data security risks associated with innovations with brain-computer interface? And what does this convergence mean for ‘the self’?

Q: How quickly has the technology advanced?

A: Research on the human brain is not, in itself, new. Brain science research and advances in neurotechnology has already resulted in numerous medical devices already entering the market.

However, the convergence of other technologies such as nanotechnology, synthetic biology and additive manufacturing, combined with enhanced imaging technologies and more powerful infrastructure, will accelerate the pace at which new neurotechnologies evolve, and the entry of new drugs and products into the market.

So too will the aging population, and the pressures that meeting their physical and mental health needs place on governments and other stakeholders.

Q: Do we expect regulations to be put in place? Are there any now? Should there be?

A: Existing regulatory regimes will capture the types of research being undertaken by scientists involved in these large-scale brain projects, and the products that the projects give rise to — whether that is in the United States, Australia or Israel to name just a few.

The more important question, though, is whether these existing regimes and instruments shall be adequate and effective for the types of technologies and products that they give rise to? And this question we cannot answer at this time given that we simply do not know what this exciting field or research shall give rise to.

The fact that we cannot answer this question makes an event such as the Neurotechnology and Society workshop all the more important.

Bringing together key stakeholders across all relevant fields in order to better understand the trajectory of the research and technologies shall allow us to begin the process of evaluating the effectiveness of the current regimes, and, where necessary, to proactively explore other regulatory and governance models so as to ensure that the potential benefits outweigh potential risks.

Q: Who is this science for?

A: One can reasonably assume that the therapies and products that are initially developed as a result of this fundamental research will, at least in the first instance, benefit a small segment of the population (i.e., those who are most able to afford them), the majority of whom are likely to reside in developed economies.

This alone presents a myriad of social and ethical challenges, and while not new in themselves, need to be incorporated into funding decisions including the prioritization of research.

Q: What would be going too far?

A: Going too far, in my view, can be simply described as follows: not learning the lessons from previous technologies, including their entry into the market and consumer acceptance thereof. For society to be able to take full advantage of the benefits offered by neurotechnologies, we need to ensure that broader ethical, social and legal questions are addressed in real time, and that society is actively engaged in the development, and deployment, of the technologies.

In sunny Arizona, shade is a precious element of the landscape. Pedestrians follow circuitous routes under trees, awnings and shade structures – rewarded by a more comfortable journey.Recently-published work by four ASU researchers helps pinpoint how people respond to shade in the desert. They asked, “What’s key to feeling comfortable in the desert, and how does shade contribute?”The findi...

In sunny Arizona, shade is a precious element of the landscape. Pedestrians follow circuitous routes under trees, awnings and shade structures – rewarded by a more comfortable journey.

Recently-published work by four ASU researchers helps pinpoint how people respond to shade in the desert. They asked, “What’s key to feeling comfortable in the desert, and how does shade contribute?” 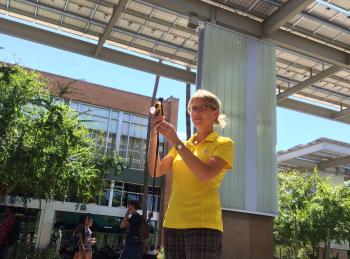 The findings give insights on how we can develop more desert spaces to be comfortable in hot, sunny conditions.

“Thermal comfort is a very subjective term,” explained Ariane Middel, assistant research professor in the School of Geographical Sciences and Urban Planning. “How comfortable you feel is influenced by environmental factors that you can objectively measure, such as temperature and humidity, but also by personal factors, such as your clothing or how active you are, or how adapted you are to the outdoor conditions.”

To investigate what drives thermal comfort, Middel and her colleagues took advantage of the varied environments on ASU’s Tempe campus in the area near the Memorial Union.  On typical days over four seasons – fall, winter, spring, and pre-monsoon summer, they measured weather conditions in five settings – under the large solar canopy in front of the building, and nearby in a sunny, grassy area, a sunny concrete-paved area, and two areas deeply shaded by trees, one grassy and one concrete-paved.

On the same days, they also conducted surveys – collecting over 1000 in all.  The surveys asked respondents how comfortable the temperature felt, as well as their temperature preferences, how they felt in general, their familiarity with desert climates, and their activity level just before taking the survey.

Putting together the meteorological and survey data brought some helpful insights.

First, the meteorological measurement that best aligns with people’s feeling of comfort is one called “globe temperature.”  Globe temperature measures all the different types of radiation that strike a person from all directions – and globe temperature is the basis for a thermal comfort index called "PET."

The surveys also revealed patterns and differences in how people perceive temperature in Phoenix. Respondents who had lived in Arizona for a longer time were more adapted and felt more comfortable in hot conditions than respondents who had just moved to the area.

On average, the survey respondents felt that temperatures from 66 to 100 F are acceptably comfortable. The temperature where an average of respondents reported feeling neither hot nor cold – called “neutral temperature” – is 83.5 F.

“This is indeed a nice outdoor temperature in Phoenix,” Middel said.

The study results supported the idea that, here in the dry climate of central Arizona, shade is the most important factor in determining what temperature feels comfortable. So how can we increase shade in urban Phoenix?

A key finding was that trees and artificial shade – the solar canopy – seemed to be equally efficient in improving perceived thermal comfort.

“Trees have other benefits of course, such as for aesthetics, storm water retention or wildlife habitat. But in areas where these benefits are secondary, man-made shade structures have great potential to improve our public spaces and make desert life more comfortable,” Middel said.

The research described here was published in the International Journal of Biometeorology. Middel’s collaborators in this project were Nancy Selover and Bjoern Hagen, also with ASU’s School of Geographical Sciences and Urban Planning, and Nalini Chhetri, Assistant Director of the School for the Future of Innovation in Society.  Nancy Selover is also Arizona’s state climatologist. All four researchers are senior sustainability scientists with the Julie Ann Wrigley Global Institute of Sustainability.