Breakthrough Initiatives official to speak about the search for extraterrestrial life at ASU Sept. 20

A key player in the search for intelligent extraterrestrial life will speak at Arizona State University. Simon “Pete” Worden, who is the chairman for the Breakthrough Prize Foundation and leads the spectacular Breakthrough Initiatives, will give the 2016 Eugene Shoemaker Memorial Lecture, 7 p.m., Sept. 20, in the Marston Exploration Theater on ASU’s Tempe campus.

Worden, formerly the director of NASA’s Ames Research Center, is a recognized expert on space and science issues. He will describe some audacious plans to seek out life beyond Earth in a lecture titled “Shooting for the Stars: The Interstellar Breakthrough Initiatives.” 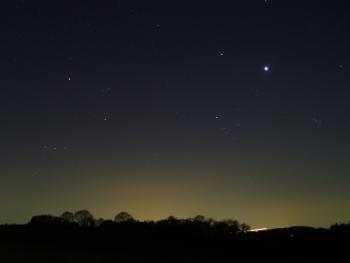 “Whether or not we are alone in the universe is one of the oldest and biggest of the big questions of existence,” said Paul Davies, director of the Beyond Center for Fundamental Concepts in Science, which hosts the annual Shoemaker Lecture. “Given the ambitious goals of the Breakthrough Initiatives, we may soon know the answer.”

Announced a year ago, the Breakthrough Initiatives is a program generously funded by the philanthropist Yuri Milner to search for intelligent life outside of Earth. It consists of Breakthrough Listen, a 10-year project to actively search for extraterrestrial communications; Breakthrough Message, to study the ethical implications of sending messages into deep space; and Breakthrough Starshot a proposal to use powerful lasers to propel a fleet of tiny probes to Alpha Centauri, a nearby star system.

A target for Breakthrough Starshot could be a planet called Proxima Centuari b, an Earth-sized exoplanet that resides in the habitable zone of its host star in the Alpha Centauri system. The idea is to develop technology that will allow microchip-sized payloads to be accelerated to 20 percent the speed of light, enabling them to reach Alpha Centauri in about two decades.

“Starshot is an audacious attempt to leapfrog existing space exploration by harnessing several new technologies,” said Davies. “The prospect of human probes reaching the stars within our lifetime is breathtaking.”

Each year, the Beyond Center presents a special award to a leading scientist to honor the life and work of Eugene Shoemaker, who together with his wife Carolyn Shoemaker, pioneered research in the field of asteroid and comet impacts.

The Shoemaker Lecture is free and open to the public, but reservations are suggested. For more information, go to http://beyond.asu.edu/, or call 480-965-3240.

Now, there’s an app for that.

The fun and engaging Sun Devil Rewards app keeps score with Pitchforks that can be redeemed for free prizes, everything from VIP tickets and golf packages to autographed memorabilia and exclusive tours of ASU landmarks. Download Full Image

Unlike most rewards programs, which require purchases to obtain product discounts, Sun Devil Rewards keeps score with Pitchforks that are earned simply by interacting with the app and redeemed for free prizes.

“This app is, pure and simple, a rewards program; the university’s unique way of saying thanks to its family of 400,000-plus alumni around the world, its faculty, staff, students and everyone who is engaged with ASU,” said Dan Dillon, university chief marketing officer. “There is no cost whatsoever, and Pitchforks are earned easily, just by doing what Sun Devils normally do, which is being a part of the fabric of ASU, following its progress and activities and staying connected.”

Pitchforks can be redeemed for unique ASU experiences, Sun Devil merchandise and sweepstakes opportunities. Among early rewards are VIP tickets and backstage passes to ASU Gammage events, golf packages, autographed memorabilia and exclusive tours of such ASU landmarks as the world’s largest university-based meteorite vault. Additional rewards and sweepstakes prizes will be regularly added to the program catalog.

When registering for the first time, users can immediately earn 250 Pitchforks by tapping the “Secret Word” button on the app homepage and entering ASULAUNCHNEWS.

“This is our way of honoring alumni and all advocates of Arizona State University,” said Dillon. “We have built an app that is inviting, engaging and rewarding for all.”