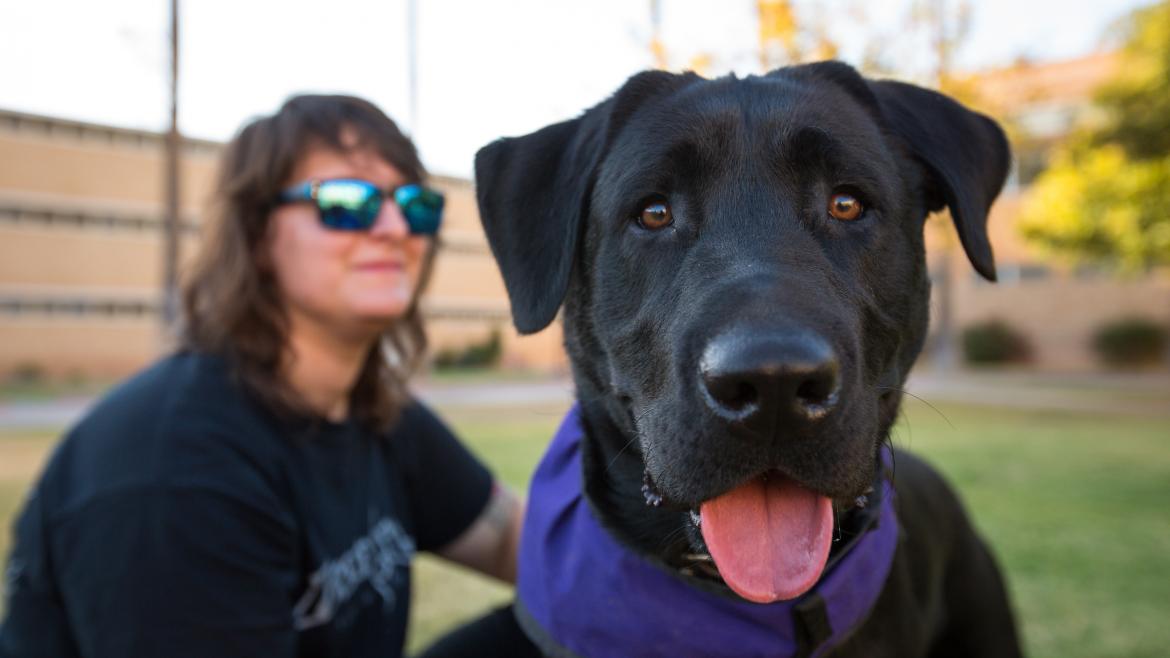 For ASU trainers, it's a dog day morning, afternoon and night

Tempe campus
This semester, ASU students are teaching 11 dogs to become service animals.
Raising these puppies to be service dogs is hard but rewarding for ASU students.
It's a tail of 10 ASU students, 11 dogs working together to help others.
September 13, 2016

They’re the coolest ones on campus, and — even though they sleep through class — they’ll get to graduate in only two years.

Then, thanks to the dedication of a group of Arizona State University students, Sparky’s Service Dogs will spend the rest of their lives helping people in need.

This semester, 11 Labrador and golden retriever puppies are learning how to become assistance animals for people with diabetes, mobility issues or post-traumatic stress disorder. They’re being raised by 10 students, who are members of Sparky’s Service Dogs, a campus club.

“When we started this, we decided we really wanted to create a community on campus for these raisers,” said Taylor Randle, the president and one of the founders of the club, which, besides the raisers, includes more than 100 members who serve as “puppy sitters,” handlers and all-around helpers.

“We understand that it takes a lot of time and effort, and it does take a village to raise a dog. It’s not just one person so we really support each other.” Taylor Randle is president of Sparkys Service Dogs and is raising Kristoff, a black Lab, who will move on to specialized training next spring. Photo by Charlie Leight/ASU Now

Randle, a senior kinesiology major, was attending the Passport to ASU beginning-of-semester event two years ago when she saw two golden retriever puppies at one of the club booths. The Scottsdale-based nonprofit Power Paws Assistance Dogs was looking to get ASU students interested in starting a club.

Randle and some friends immediately decided to launch Sparky’s Service Dogs. It started with just a few raisers, including Randle, who took on Kristoff, a black Lab. The club partners with Power Paws, which breeds the puppies and provides the raisersFor now, the number of raisers is capped at 10. More raisers will be needed next year. and their animals with dog food, gear and basic veterinary care. 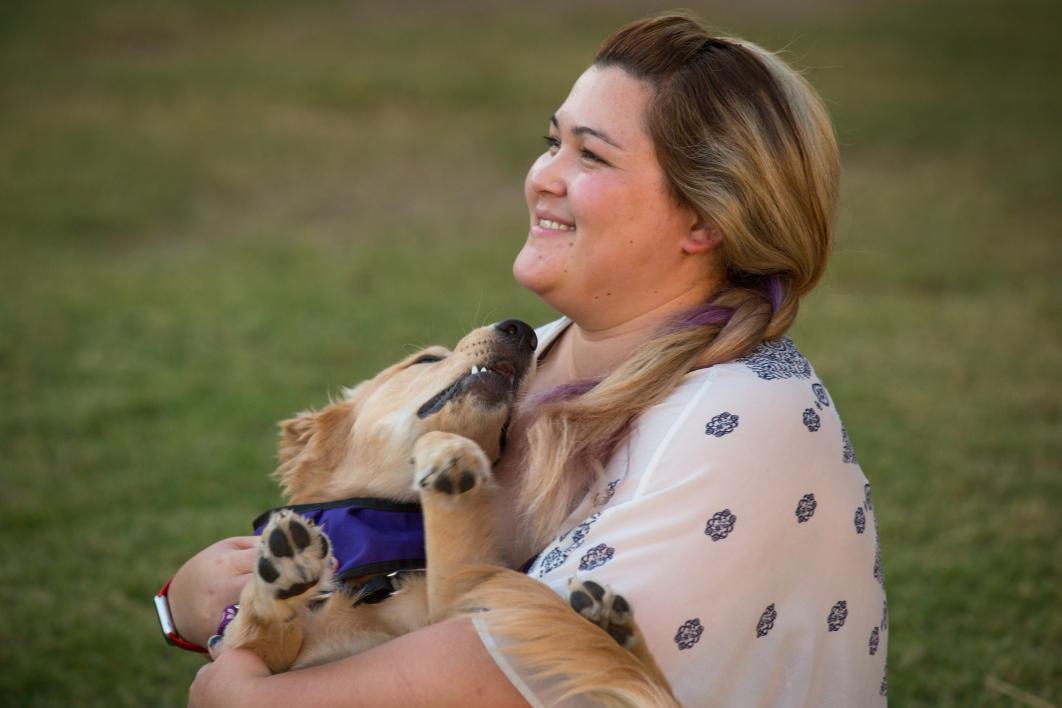 Kaleia Kramer, a senior majoring in biomedical engineering, plays with Uschi, the 6-month-old golden retriever she is raising for Sparky's Service Dogs. 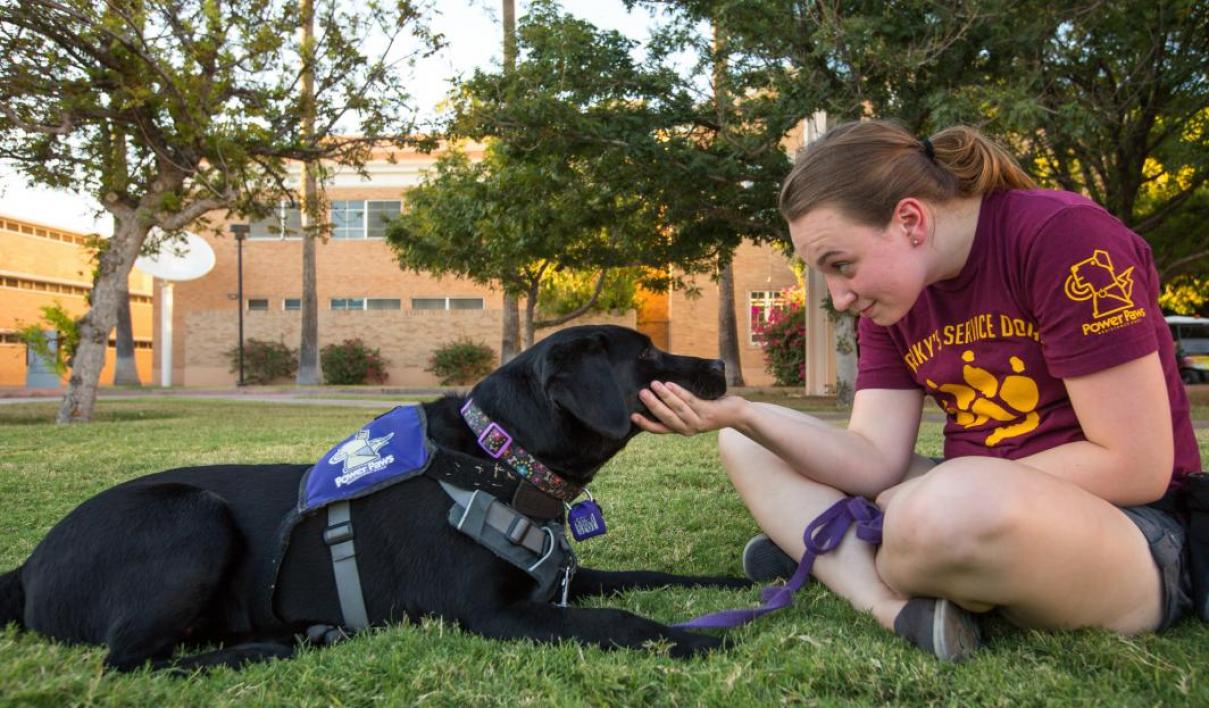 Qwest stares down her raiser, Katie Durheim, a junior majoring in Spanish language and culture through the W. P. Carey School of Business. 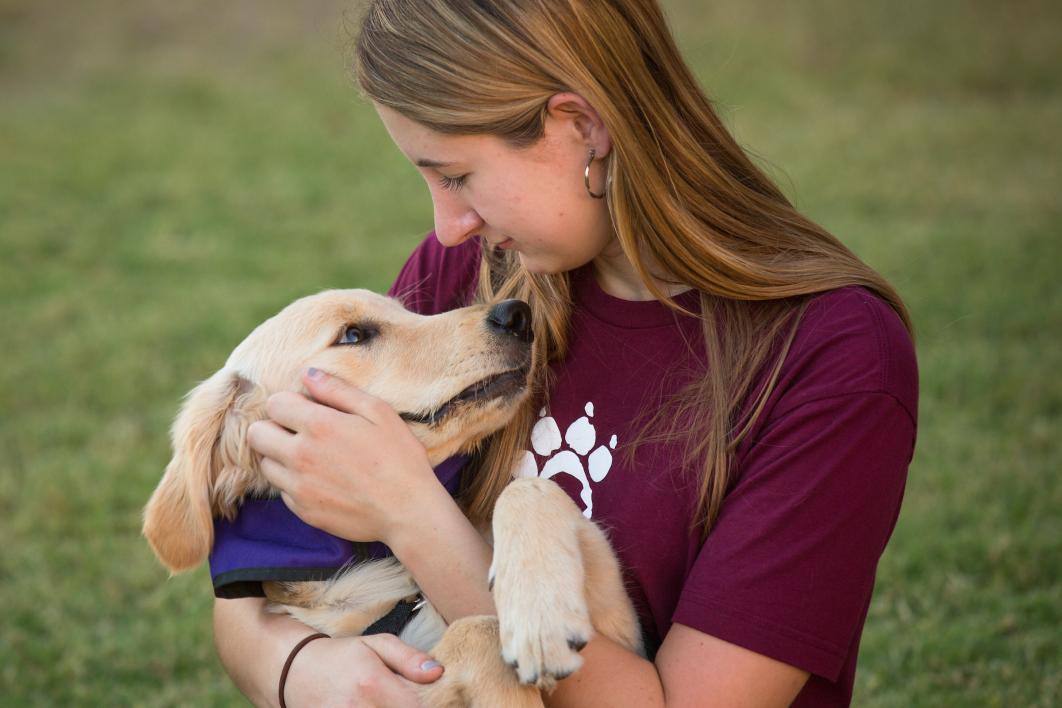 Jordan Patterson, a junior majoring in mechanical engineering, plays with Ulani, the 6-month-old golden retriever she is raising as part of Sparky's Service Dogs. 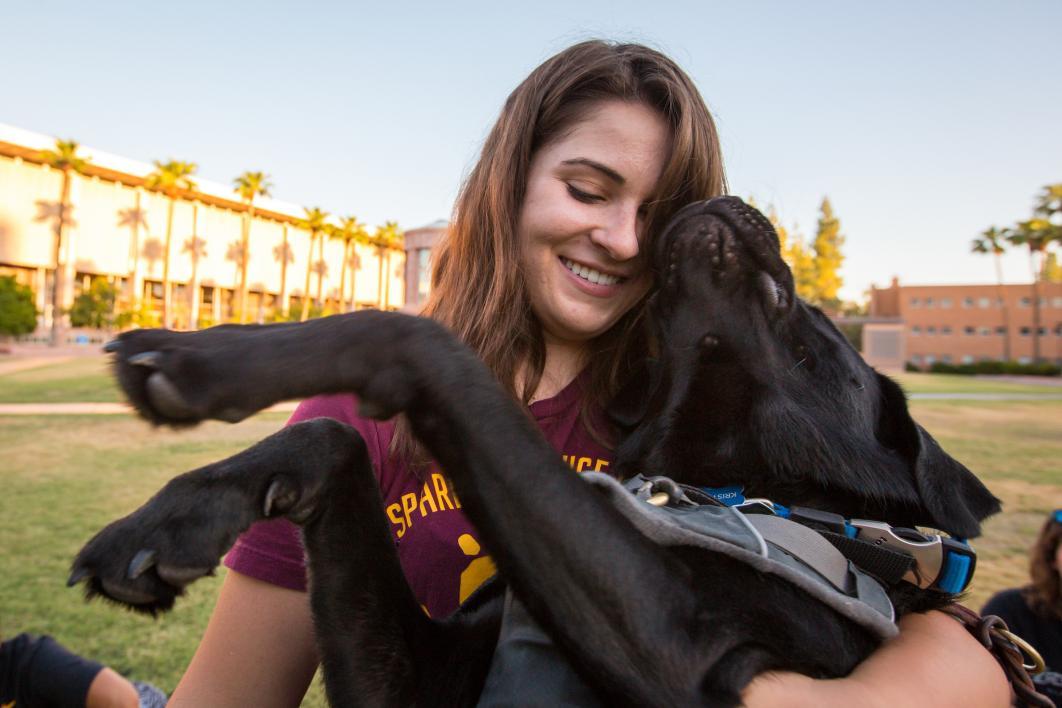 Taylor Randle, a senior majoring in kinesiology, is the president of Sparky's Service Dogs. The dog she is raising, Kristoff, will complete his training with her next spring and move on to specialized training to become a diabetes alert dog. 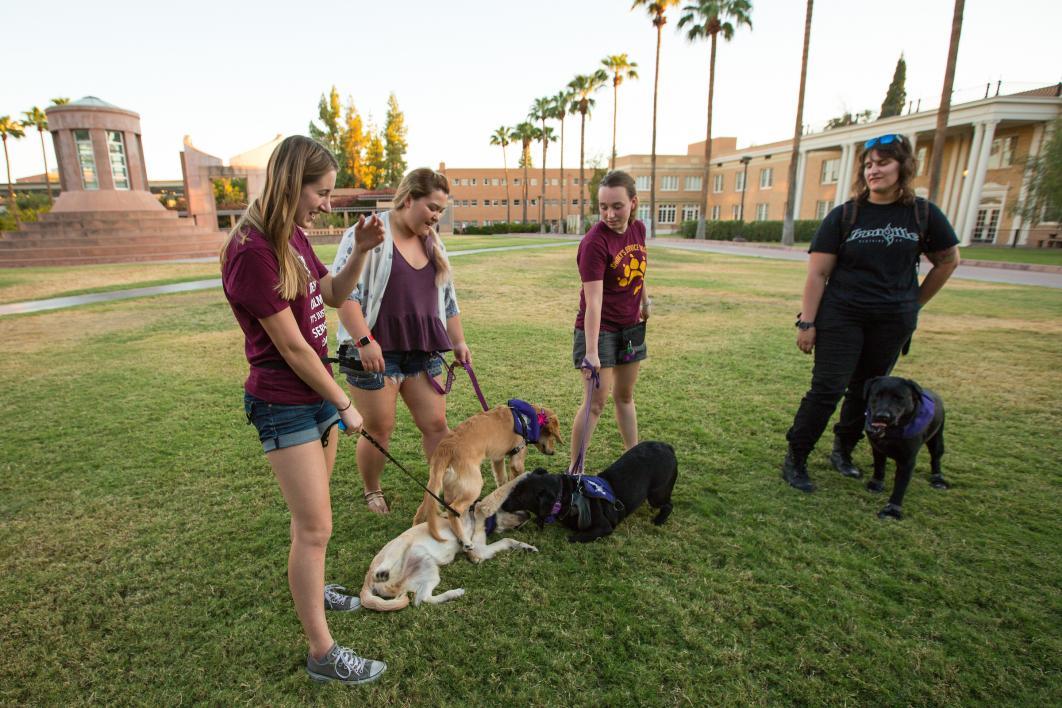 For raisers, the job is 24 hours a day, seven days a week. The dogs go everywhere with the students — to class, to the grocery store, on the bus. ASU’s housing department gives permission for the dogs to live in the dorms on a case-by-case basis, and three of the current service puppies have been dorm dwellers.

Emily Hopkins, a junior criminal justice major, lived in the dorms with her dog, Quantico, a 73-pound black Lab.

“A lot of people know who you are, and everyone wants to be your friend,” she said of dorm life with a dog. “But it was good because there are always people around who will watch him for me.”

Jordan Patterson, a junior mechanical engineering major, said her dog, Ulani, draws a lot of attention on campus. “It’s fun, but sometimes you have to tell people not to pet her because she’s working.”

Randle said that being among the crowds on campus is very stimulating for the dogs, but they settle quickly in the classroom.

“They lay under the desk or behind you, and they sleep through the whole class,” Randle said.

Several times a day, the raisers have to stop what they’re doing to spend 10 minutes or so training their puppies in basic obedience as well as behaviors such as opening and closing doors. The students also take the dogs to weekly and monthly trainings and evaluations.

After their time with the raisers, the dogs get specialized training according to aptitude and then are placed by Power Paws with a person who needs an assistance dog.

“Kristoff refuses to retrieve anything, but he uses his nose constantly. So he will become a diabetes alert dog,” Randle said. “He’ll go with a child with type 1 diabetes and, using his sense of scent, will alert them to high or low blood-sugar levels.”

She'll be sad when Kristoff moves on next spring, but gratified that she has trained him to help people. A few weeks ago, Randle took on 12-week-old Vail, a black Lab, who will follow Randle to grad school after she graduates from ASU next May.

Although it’s a big responsibility, raising the dogs has been enriching as well.

“I’ve learned a lot about responsibility, and about my time management and the amount of things I can juggle,” Randle said.

Tempe campus , School of International Letters and Cultures , The College of Liberal Arts and Sciences , Humanities