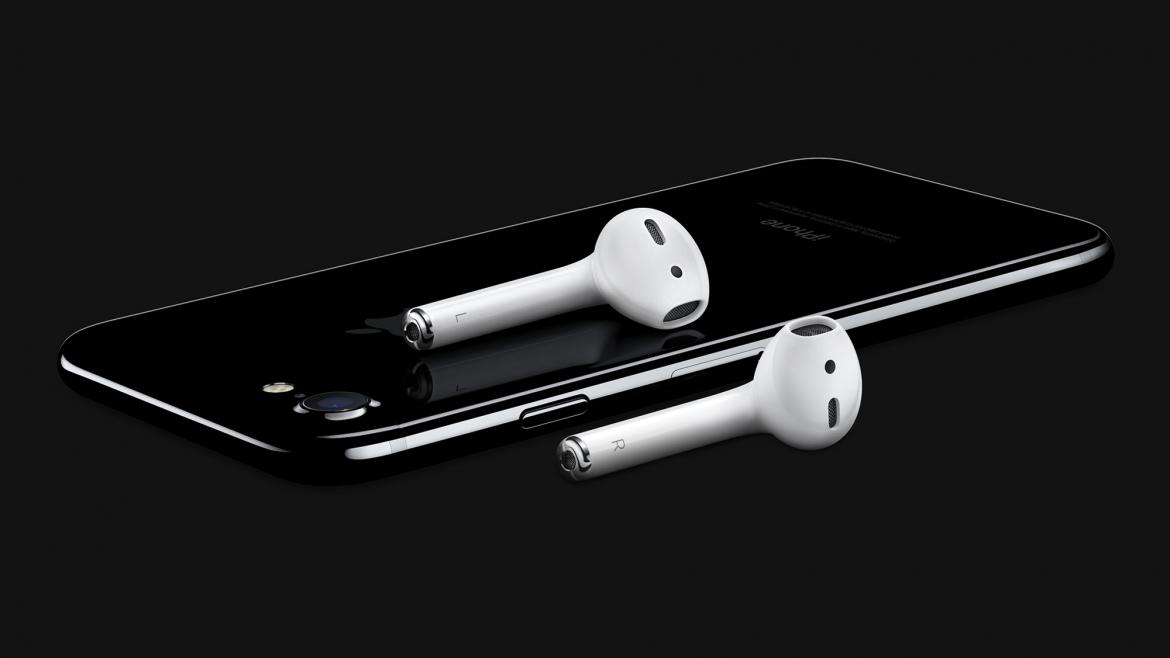 Unplugging into the future

Apple announced the features of its iPhone 7 and 7 Plus this week, and among the changes stirring the most reactions is the elimination of the headphone jack. Many are hailing wireless as the future, but an Arizona State University faculty member has a different take. 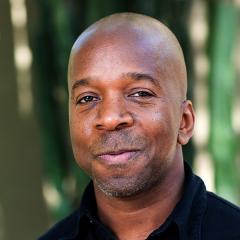 Michael Bennett, an associate research professor in ASU’s School for the Future of Innovation in Society, says Apple isn't breaking new ground with its wireless headphones. But its beefier cameras? That's a different story.

BennettBennett is also affiliated with ASU’s Center for Science and the Imagination and the Risk Innovation Lab, and he’s a lecturer in the Sandra Day O’Connor College of Law. — who focuses his research on policy and legal dimensions of technological innovations and the creative industry, as well as how pop culture interacts with that — argues that technology of the future is going to have to be able to withstand natural and societal disasters.

He spoke with ASU Now about the week’s tech news and where we are headed.

Question: The big news in tech this week is obviously the new iPhone 7 and the elimination of the headphone jack. Wired magazine has said, “The transition’s going to be painful, and wireless is the future anyway.” Do you think that’s an accurate statement?

Answer: No, I don’t. I actually saw that article and was struck by it. It seems to be that we experienced the wireless future probably 10 years ago in my opinion. I’d say it’s more precise to say wireless is an already-present future. To paraphrase William Gibson, it’s not yet uniformly distributed across society.

Many of our tech devices are already based on this connectivity. (We’re) roaming freely, simultaneously less connected but more connected. The intimacy has increased — they’re further and further integrated into our bodies, but just not through wires.

You can see this when you go to major cities and you walk about … at this particular moment in 2016 compared to even two years ago … you see the absence of wires in devices like Beat headphones. This has been pretty ubiquitous with Bluetooth devices for a while now.

Q: What do you think are the bigger changes coming as Apple heads into the 10th-anniversary year of the iPhone next year?

A: As far as the changes with both the 7 and the 7 Plus, the erasure of the jack is minor compared with the more muscular cameras that are being introduced. If I were writing the headlines, I wouldn’t write “iPhone 7 lacks a jack,” but “iPhone is the next Kodak.” … That’s really the bigger news.

Q: Is Apple heading in the direction of “the future,” or are there other players who are going to steer our path?

On the one hand, there’s the Apple cult. There are so many of us — and I count myself as a member — who don’t really think anymore; we buy Apple. We are spiritually invested in Apple. It often tickles me to look at the Apple logo, that chomped-on Apple image with its allusions to the Old Testament, and that’s right on point. It’s a spiritual, almost religious experience to engage with these devices, and that’s got to have a significant impact on maintaining your market share, and more significantly, on your innovation daring. …

With the billions of cash that you’re sitting on, you have to wonder what a company like that has incentive to be daring. … But if Apple were to disappear today, it would still have an influence on design.

Q: Where do you see technology heading in the next five years? 10? 20?

A: The problem space that thoughtful innovators that are really trying to reach a wide market — the problem space that they’re engaging will have to grow. We’re entering this phase where catastrophe looms large — whether we’re talking about collapsing infrastructure domestically; or we’re talking about the widening gap between socioeconomic classes, the evaporation of the middle class, what that means materially or politically; or we’re talking about exacerbated climate situations and erratic weather conditions — one of the drivers (of innovation) will have to be the emergence of one of these types of disasters.

The phones, you can see this perhaps even in the new 7s — so, we talked about the loss of the jack. We talked about the camera’s muscularization — but another thing going forward is the phones will be water-proof.

That’s great if you happen to drop your phone in the tub — if you drop it in the bathtub while you’re in there watching movies, which I’m guilty of — but it’s also going to be incredibly useful if you’re in the Gulf region when the next hurricane comes through, or you happen to be in a coastal community in another part of the world where water levels are rising and erratic climate conditions are increasingly prevalent — you kind of need a sturdy phone.

Q: As we move forward, the pace of technology changes seems to be exponentially increasing. Does this raise larger issues? Does it change our day-to-day life?

A: I think it’s part and parcel with the destabilization of many sectors of our social existence.

Whether we’re talking about destabilized families, destabilized employment conditions, erosion of wealth as I mentioned a little earlier, erosion of faith in religious institutions, certainly in the West and arguably in other parts of the world — all of these things are happening at the same time and all of this points back to the importance of that quasi-religious experience with Apple devices … to the extent it gives us access to a hallowed space, whatever you want to call it …

It’s obviously serving as a sort of role that formerly would’ve been taken care of by something like the church.

Q: Can you speak to any environmental concerns raised by the speed of technological advances?

The fact that many of these Apple devices could not function without the inclusion of rare-earth elements that require considerable disruption of the Earth is a troubling chunk of reality.

Top photo: The new iPhone 7 is shown with wireless AirPods. Photo by Apple

ASU international students get a taste of tailgating at Football 101

Before the big game this weekend, hundreds of Arizona State University students from around the world got an opportunity to understand a uniquely American sport when they took Football 101 at the Memorial Union on the Tempe campus.The fourth annual event aims to make the complicated sport intertwined with U.S. culture more accessible to ASU’s diverse international student body. It comes just in ... 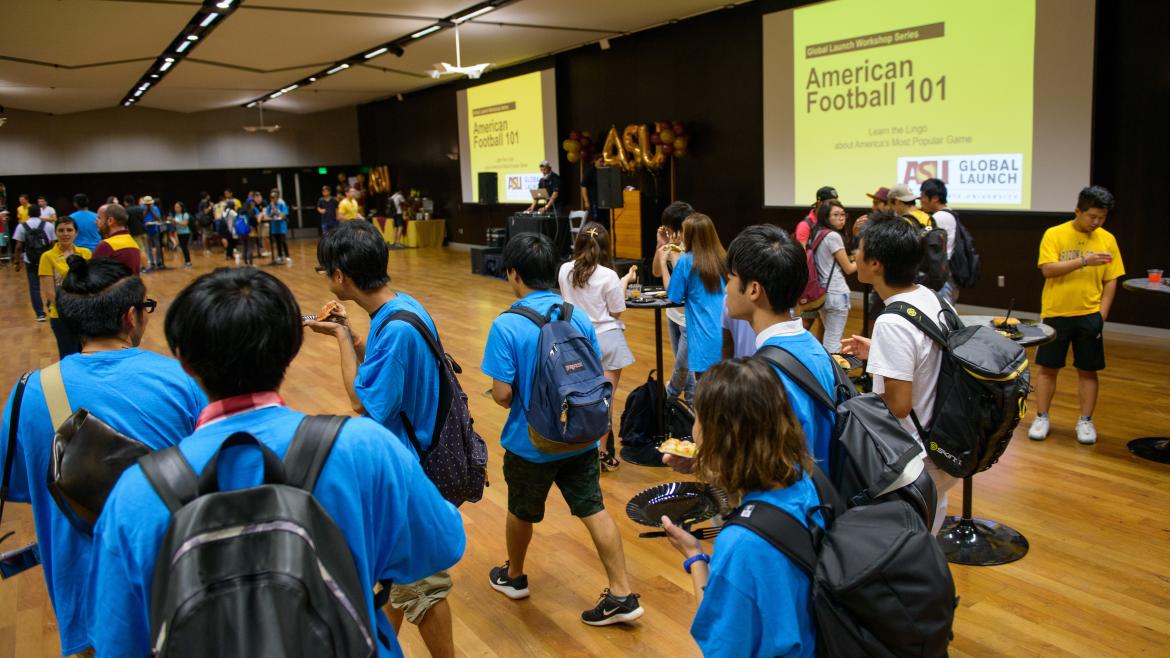 ASU international students get a taste of tailgating at Football 101

Before the big game this weekend, hundreds of Arizona State University students from around the world got an opportunity to understand a uniquely American sport when they took Football 101 at the Memorial Union on the Tempe campus.

The fourth annual event aims to make the complicated sport intertwined with U.S. culture more accessible to ASU’s diverse international student body. It comes just in time for students to support the Sun Devils (1-0) as they host the Texas Tech Red Raiders (1-0) on Saturday at Sun Devil Stadium.

“Students are used to going to soccer games — the word for ‘soccer’ outside the U.S. is ‘football.’ So most students come to learn about the American football traditions because they’re a big part of the ASU community,” said Hannah Mauger, coordinator of International Student Engagement, which helped ASU’s Coalition of International Students host the event Tuesday.

Organizers tried to re-create the experience of tailgating and filled every corner of the Arizona Ballroom with people, food and games, while a DJ blasted top-40 hits. Students got a chance to pose for photos with Sparky or while wearing football pads in a photo booth.

Though the fun was at the forefront, students new to the game gained a greater understanding of the basics of football, as ASU presenters highlighted the ins and outs of the sport — everything from positions to penalties.

“I’m a big fan of football; for the previous three or four years I’ve watched all the Super Bowls,” said Ryo Takahashi, a junior exchange student from Kyushu University in Fukuoka, Japan. “It’s really strategic compared to soccer or some other sports.” 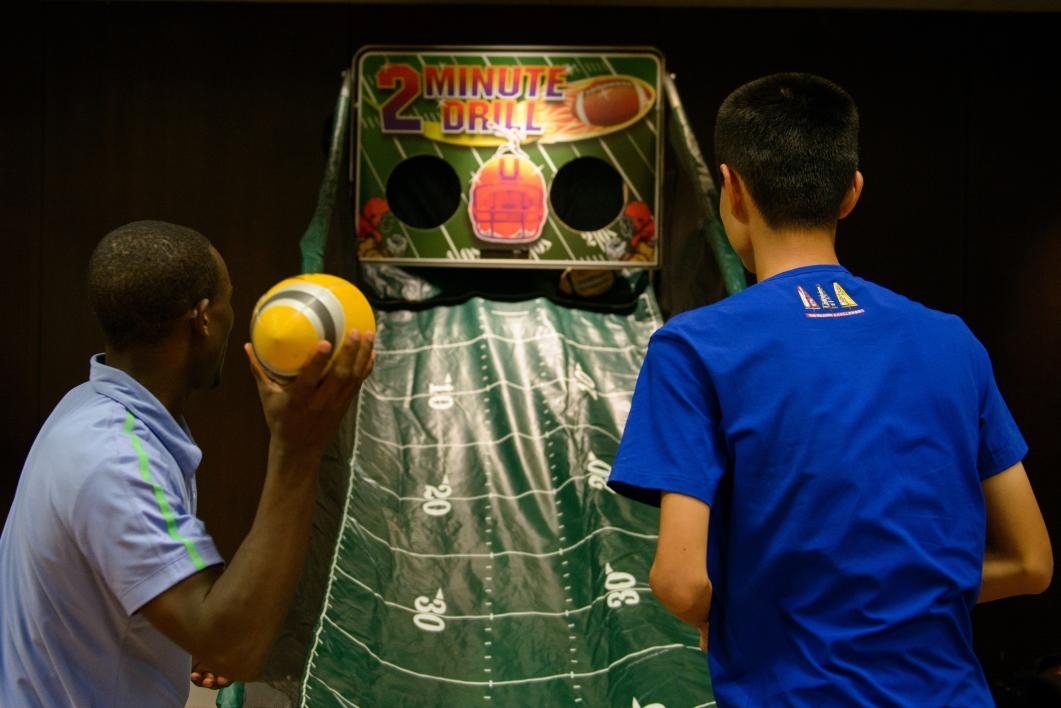 Jeanbat Busisi (left) and Zhang Wang go head to head in a two-minute drill game during the Football 101 event hosted by International Student Engagement on Sept. 6 at Memorial Union on the Tempe campus. 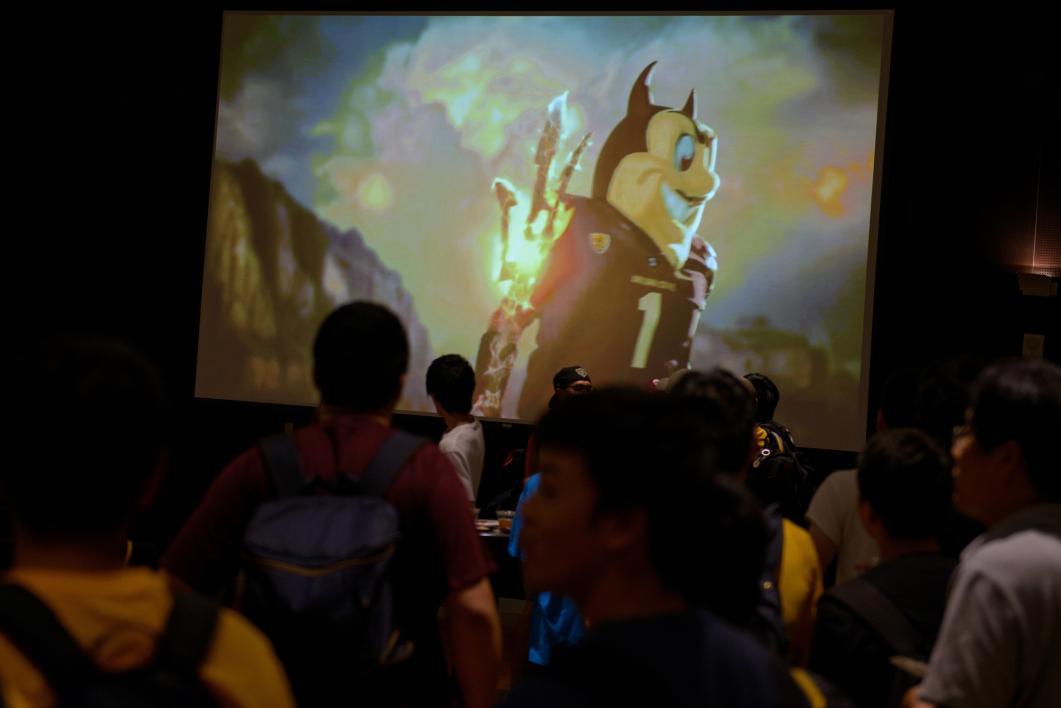 Hundreds of students watch a video introduction to football basics during the Football 101 event on Sept. 6 at Memorial Union on the Tempe campus.. 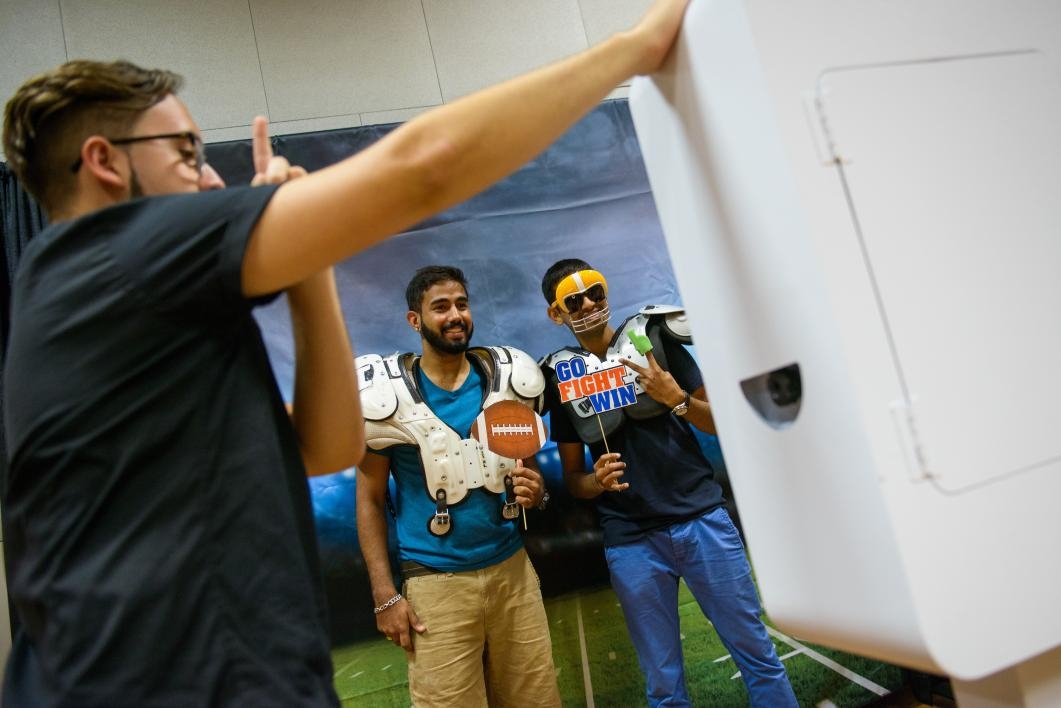 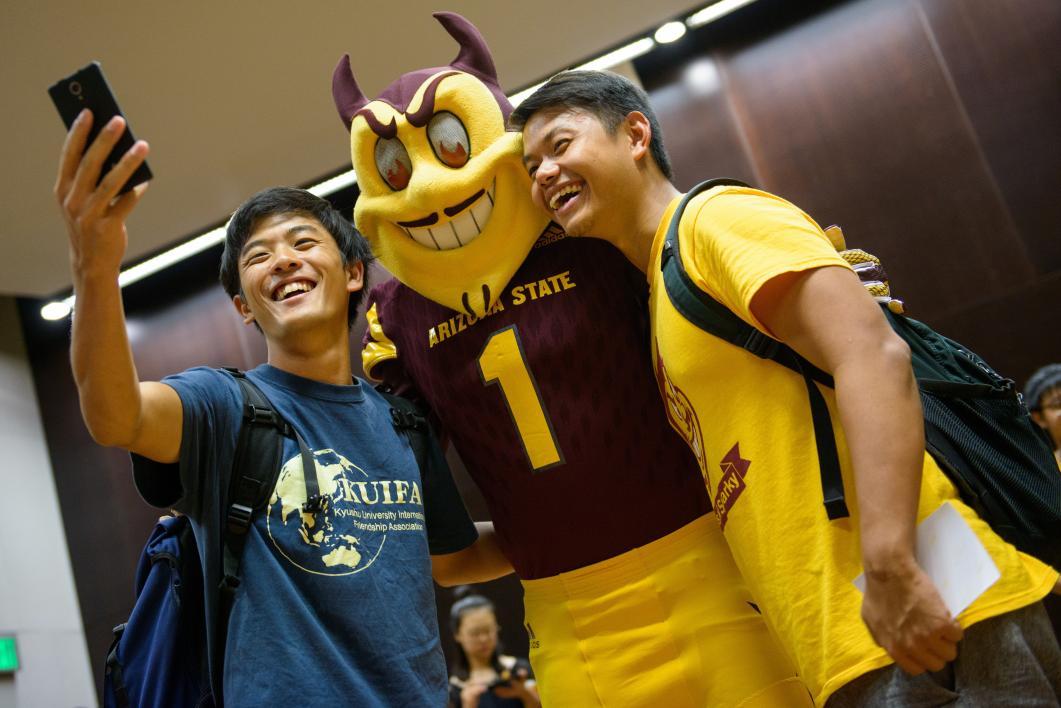 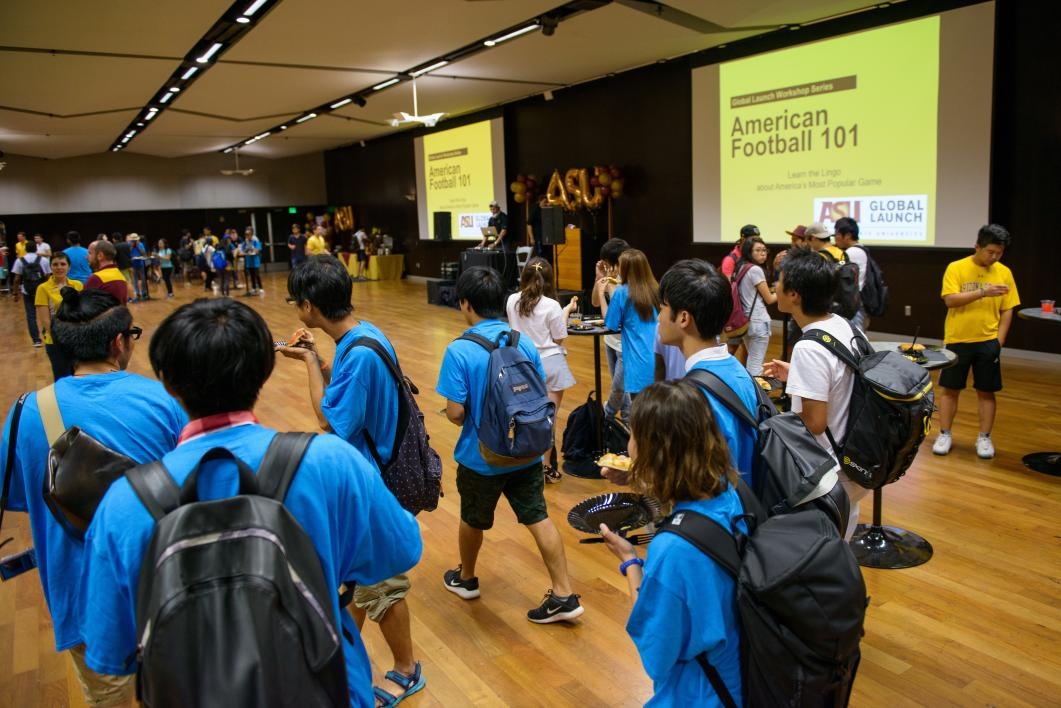 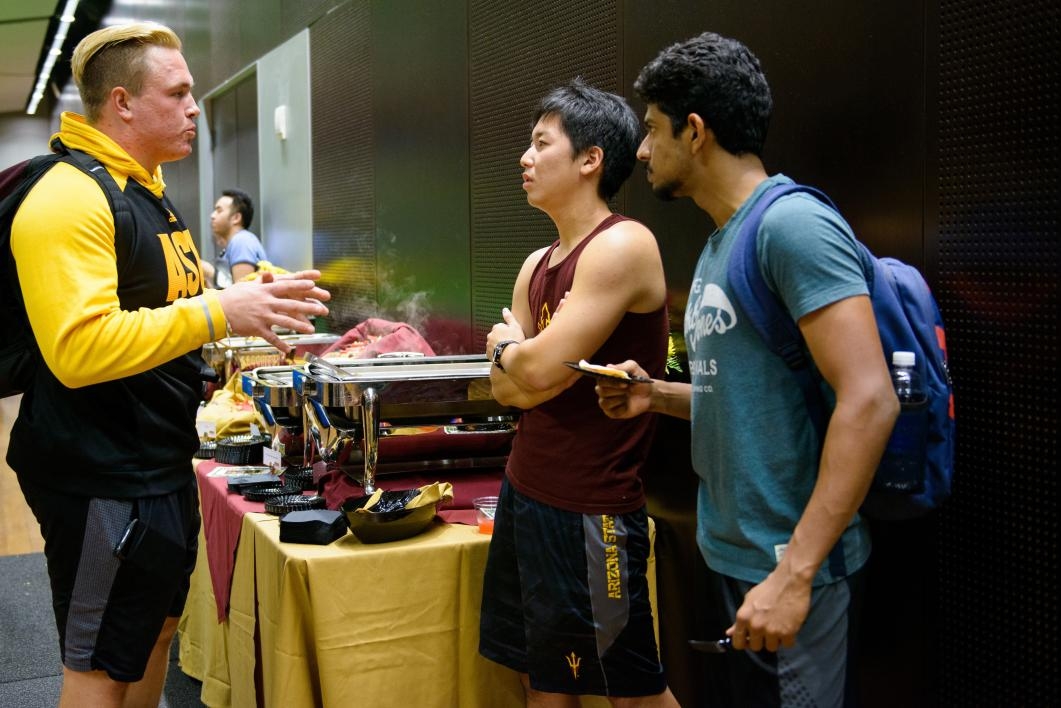 Takahashi and other students even got to meet some of the Sun Devils’ Saturday stars. Junior defensive lineman Jordan Hoyt was on hand to answer questions from future fans, but he found the conversation topics weren’t limited to just football as he worked the room.

“We talk about football, and then I was wondering what they were majoring in, and where they’re from — a lot of different stuff,” Hoyt said. “We talked about food — you know, I’m a huge sushi lover so there’s a lot of people that know the good spots!

“I love meeting new people, love talking to new people and I feel like everybody has their own story and their own individuality, and it was cool just being able to talk to them and chop it up a little bit.”

The event concluded with a raffle for field passes to an ASU game and more importantly, with a new host of Sun Devil supporters and football fans equipped with more knowledge and respect for the game.

The event “is pretty cool,” said Fawzan Nazir, a mechanical engineering graduate student from India. “The people are so tough in there, the tackling, the defending ... I’m sure I could never play the game.”