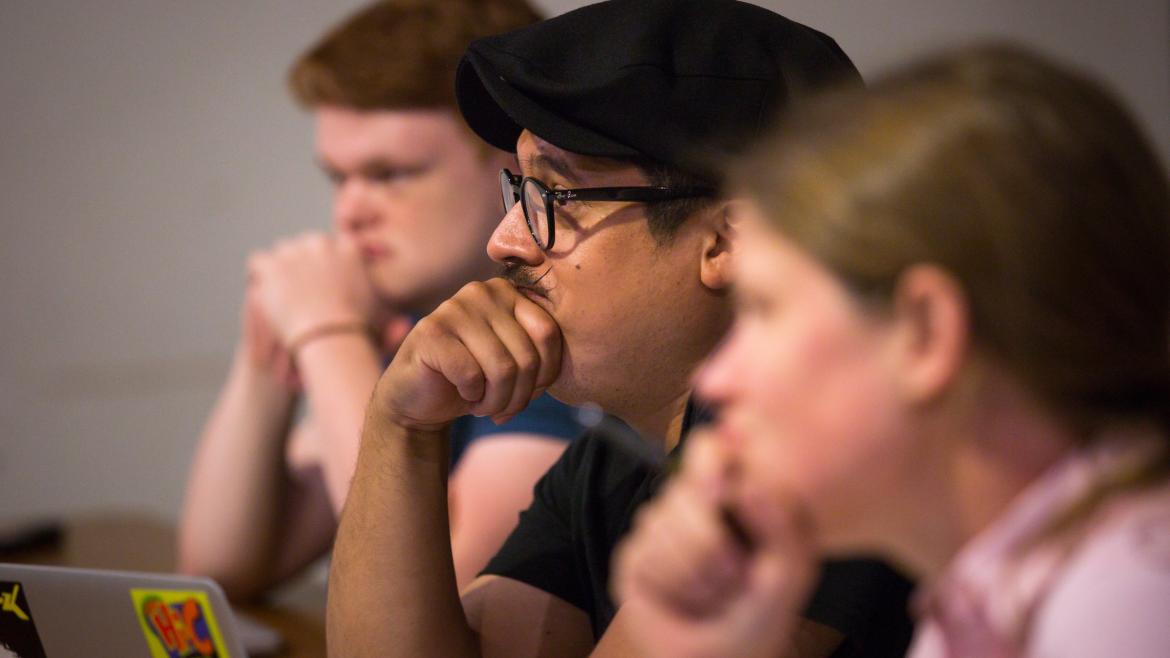 Anything goes at 'Feathers and Teeth' casting call

Editor's note: This is the first installment of a semester-long series following the production of "Feathers and Teeth" from casting call to wrap party. Look for the next story soon.

Anything goes in an open casting call, but none of it fazes director Ricky Araiza.

“Everything is fair game in an audition because I’m looking to see what their limits are, what improv skills they possess and the creative choices they make in the moment,” said Araiza, a third-year master of fine arts student in Arizona State University’s School of Film, Dance and TheatreASU’s School of Film, Dance and Theatre is a unit of the Herberger Institute for Design and the Arts..

Araiza auditioned about 75 ASU students for an upcoming production of “Feathers and Teeth,” a show that will serve as the equivalent of his master’s thesis. Araiza has about eight weeks to prep the new horror comedy, which was written in 2013 by Charise Castro Smith and described by a Chicago Reader critic as “an oddball mashup of Hamlet and Gremlins.”

ASU Now will follow the production from first audition to wrap party, documenting the successes, failures, tense moments and close calls. In total, it will show everything involved in pulling together a show. 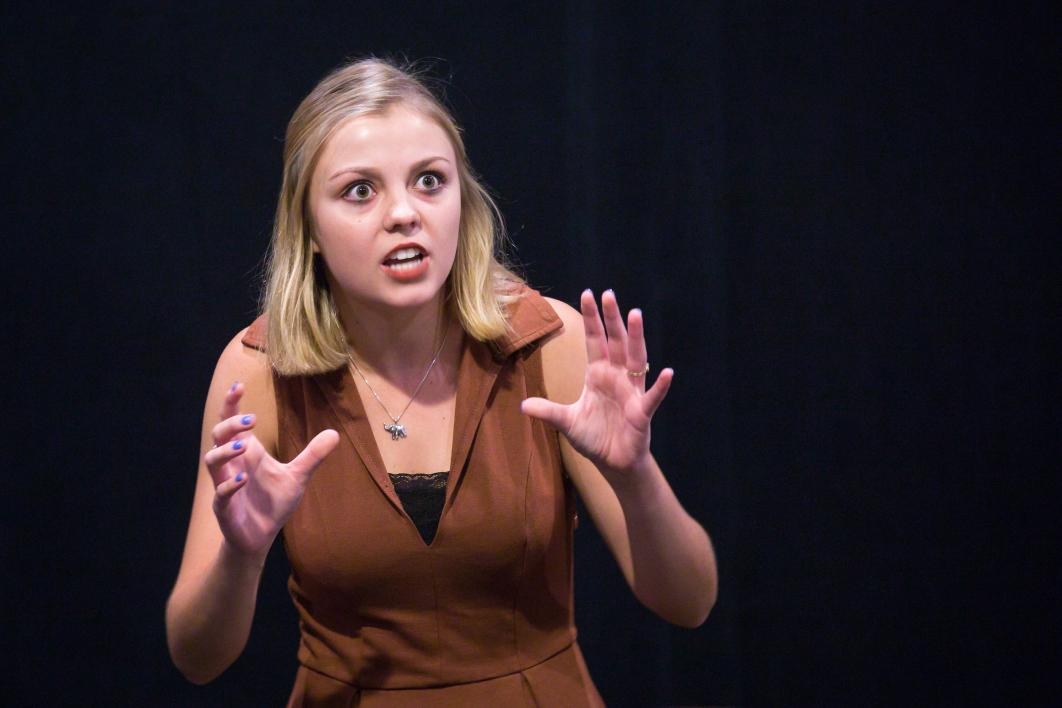 Theater freshman McKenna Knapp performs during the casting call for the horror-comedy play "Feathers and Teeth" at Nelson Fine Arts Center on Aug. 31. The play is directed by graduate student Ricky Araiza and will open at the end of October. 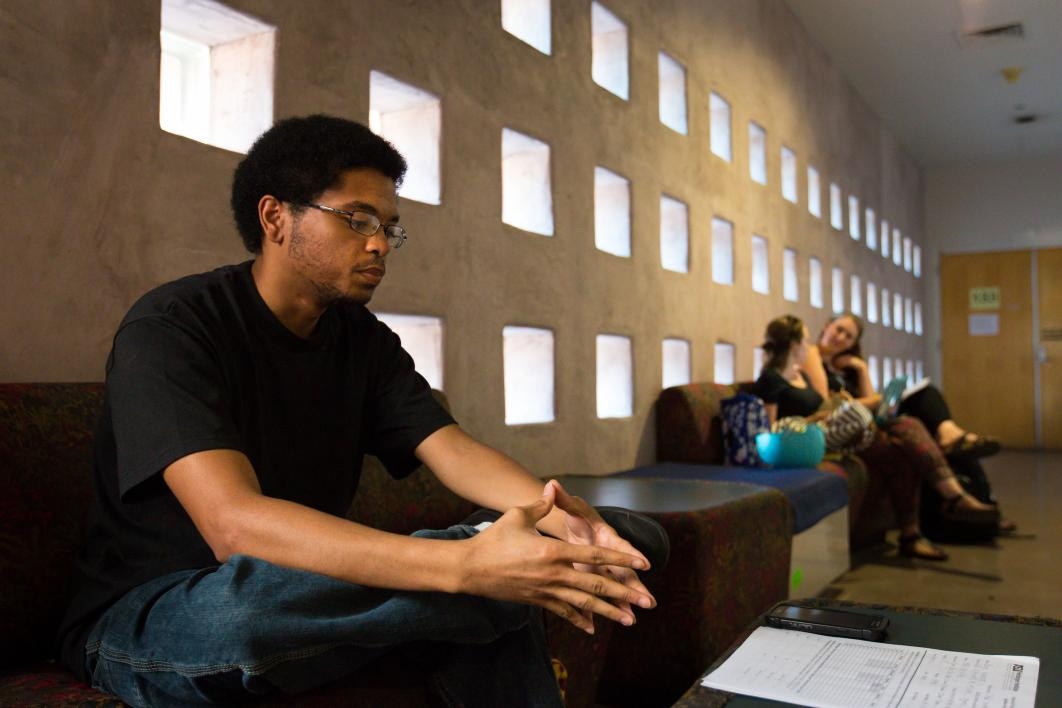 Theater senior Brian Grosvnor calms himself before auditioning for "Feathers and Teeth." 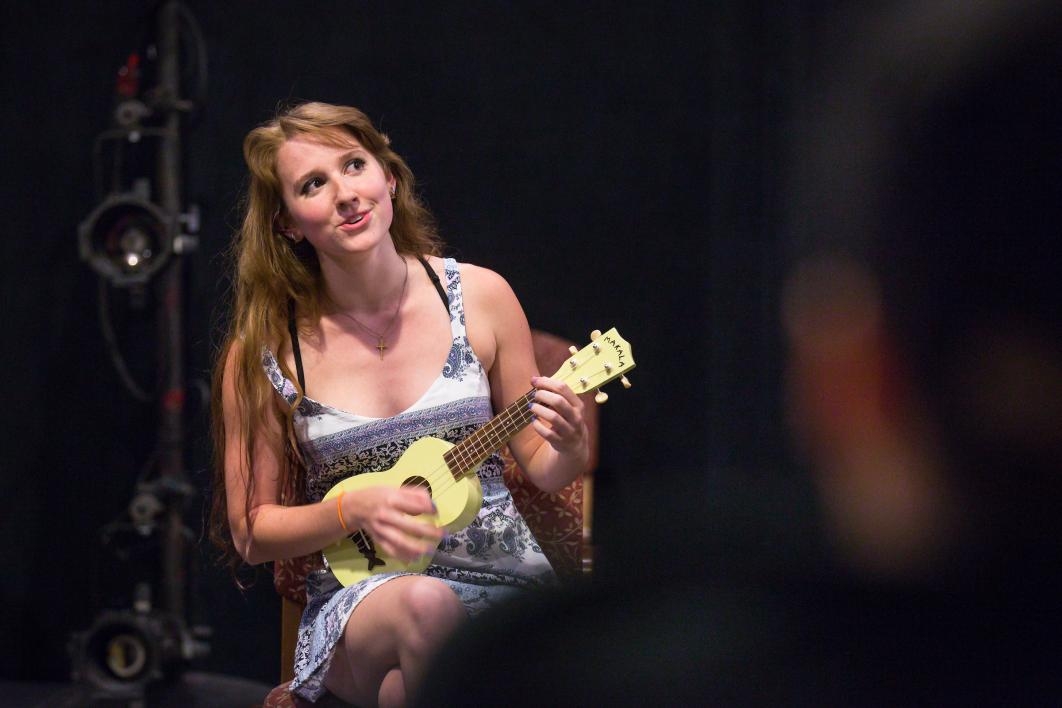 Theater senior Tess Galbiati plays the ukulele during the "other talents." Director Ricky Araiza had instructed actors to memorize two monologues, produce a funny story and share a special skill they possess. There are some uncomfortable moments as directors Ricky Araiza (left) and assistant professor Kristin Hunt listen to actors' auditions during the casting call at Nelson Fine Arts Center on Aug. 31.

Even though the 34-year-old Araiza is a stage veteran and has more than a decade of youth theater experience — including last year’s big-budget production of “Brooklyn Bridge” at ASU’s Galvin Playhouse — “Feathers and Teeth” represents a different kind of challenge.

“Ricky is used to big-budget, big-production plays, and this is much more intimate than what he’s used to,” said Lance Gharavi, assistant director of theater and chair of the master of arts in theater program. “It’s exciting because the focus for him this time around will be on the relationships he develops with the cast and crew, and the connection they’ll have to the audience.”

Araiza is admittedly a jumble of nerves these days. He knows there’s lots of work to be done. In addition to assembling a cast of four and selecting a handful of crew members, Araiza will have other duties. In the upcoming weeks, he’ll be coordinating with technicians on set design, lighting and special effects. He’ll work closely with costumers on wardrobe, and try to get his actors to thread the performance needle required of tackling horror and comedy together.

“Feathers and Teeth” is about Chris, a 13-year-old girl who suspects foul play when her father hooks up with an attractive home-care nurse two months after the death of her mother, Ellie. Set in a Rust Belt factory town in 1978, the play combines the supernatural with classic rock, family dysfunction and gremlin-like creatures that roam the house’s crawl space.

“I’m comfortable with comedy, but horror I’ve not directed,” Araiza said. “Horror requires a lot of sensory manipulation in terms of sight and sound. We have to somehow bring the two together and make it both funny and scary.”

Unlike the casting calls on Aug. 31, he doesn’t want the play to come off cheesy.

One actor dropped her baton. A solidly built young performer turned an improbably elegant cartwheel. And a Miles Teller lookalike shared an original rap he wrote about a former girlfriend, forewarning the panel that his lyrics had “some vulgarity.”

Indeed, it did. The song was laced with sexual metaphors, ethnic slurs and four-letter words.

When he finished, he asked the panel, “So, all good?”

Vining is an 18-year-old music major, who will be Araiza’s go-to person for several weeks. He understood the irony of his position on the panel.

“I play cello, so I’m the one who is usually auditioning,” he said. “Being on the panel gives you an existential sense of what they see and whether they’re completely carefree or full of angst.”

Theater major Quinn Johnson, 23, said he leaned more toward the carefree approach moments before he was called in for his audition.

“I’ve been through this process before, and the key is to not think so much,” Johnson said. “The more thinking you do, the harder it is to come back and be more grounded, and to be good.”

Johnson impressed the panel with his sped-up version of “Winter of Discontent,” as did McKenna Knapp, who performed a monologue from “The Taming of the Shrew.”

Araiza made his choices fairly quickly after two callback sessions later in the week. He will name his cast and introduce them to each other at their first rehearsal on Sept. 15.

The director is now ready to start work on his first comedy-horror, which might include some unforeseen drama along the way.

Landphere joins Sun Devil Athletics after spending the previous 14 years as the Director of Football Operations at Octagon ...