ASU alumnus motivated by a desire to serve

There’s a number of ways to serve one’s country, from military service to volunteerism. For Arizona State University alumnus Steven Gillen, it was the U.S. Foreign Service that captivated his interest, leading him to join the less than 3 percent of applicants each year who are chosen to serve.

“I wanted to serve my country,” said Gillen, a foreign service officer with the U.S. Department of State. “The best way I, as an individual, could serve was as a diplomat.” 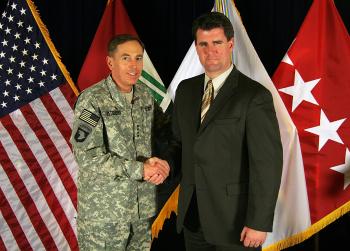 In 1993, Gillen graduated from the College of Liberal Arts and Sciences with three bachelor’s degrees in history, political science and Russian. Gillen focused his studies on Russian and Soviet politics and history, with an interest in U.S. policy during the Cold War. When the Cold War ended and the Soviet Union dissolved, his interests shifted to Eastern Europe as a whole, particularly former Yugoslavia.

“Looking back on my majors … all three basically made me tailor-made for the role of an American diplomat, a U.S. Foreign Service officer,” he said.

While at ASU, Gillen said he developed the ability to think critically, logically and objectively about how cultures, countries and governments relate to each other — an essential characteristic of any good diplomat. The emphasis in liberal arts and sciences has helped him in his position as the Syria desk chief in the Bureau of Near Eastern Affairs’ Office of Levant Affairs.

“Understanding cultures, how different people in different regions of the world think and general political philosophy is helpful as a diplomat at a tactical level,” he said. “You have to relate to people from different governments and establish a rapport as quickly as possible to seek common ground and advance U.S. policy interests.”

As part of the Syria desk, Gillen’s team helps senior state department officials form U.S. policy on Syria — primarily on two fronts: first, the current civil war, and secondly, the fight against the Islamic State of Iraq and the Levant, also known as ISIL, ISIS or Daesh.

Prior to this appointment, Gillen served as the political chief in the Bureau of Near Eastern Affairs’ Office of Iraq Affairs, where he coordinated White House visits by Iraqi Prime Minister Nouri al-Maliki in 2013 and Prime Minister Haider al-Abadi in 2015.

“For those in the College of Liberal Arts and Sciences, I would strongly encourage the best and brightest to take a look at the Foreign Service like I did,” said Gillen. “It’s not an easy line of work to get into, but I did it.”

Following graduation, Gillen earned a Master of Science in Foreign Service from Georgetown University in 1996. He became a Fulbright Scholar at the University of Saints Cyril and Methodius in Skopje, Macedonia, where ASU had maintained a continuous exchange program.

Gillen stayed in Macedonia after his Fulbright Scholarship at the request of former U.S. Ambassador Christopher Hill to advise the U.S. Embassy on the refugee crisis that was building as a result of the 1999 war in Kosovo.

Upon coming back to Washington, D.C., Gillen earned a second master’s degree in National Security Studies from Georgetown University and joined the Foreign Service.

Prior to his recent assignments, Gillen served for several years at U.S. embassies in Belarus, Iraq and Bosnia. In 2012, he received the State Department’s annual Warren Christopher Award for Outstanding Achievement in Global Affairs in recognition of “his superb substantive and operational leadership in facilitating safe and secure refugee returns, promoting human rights and interethnic reconciliation, and transforming demining efforts to meet humanitarian needs” in the aftermath of the 1992-95 Bosnian war.

“I want to leave behind a better world,” he said. “In each country where I’ve served, I want to leave the relationship between us and them better off than the way I found it. … In the long run, that’s what will make the U.S. stronger, safer, more prosperous, and the world around us a better place.”