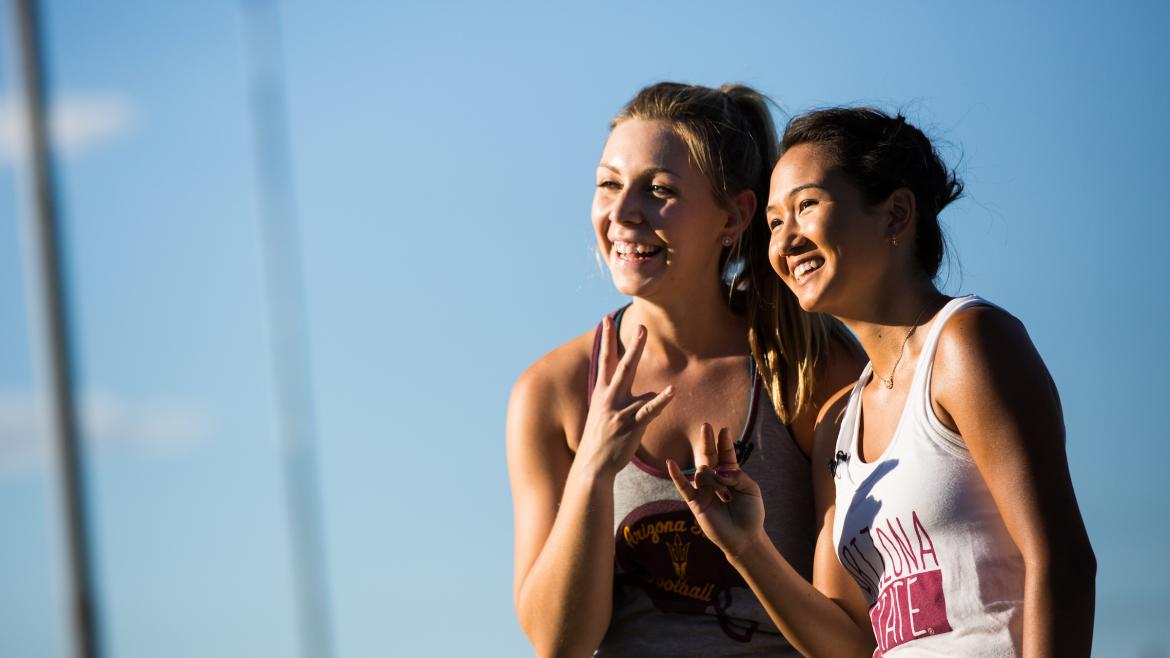 When the Sun Devils face NAU to open their season Saturday, stick around at halftime to see these national competitors perform

Arizona State University's feature twirlers Alysse Blight (pictured top left) and Rebecca Lantz represented ASU and the Sun Devil Marching Band at the 54th National Baton Twirling ChampionshipsAccording to the pair's coach, Karen Husted, the national championship competition is for solo baton twirling only (one baton). The College Miss Majorette of America competition combines three events: baton twirling including one baton and multiple baton twirling (Lantz twirled one, two, three and four batons); a strut competition (an expansion off basic march), and interview in formal attire. in July at the University of Notre Dame, and they both finished in the top 10 in the College Miss Majorette of America pageant — making ASU the only university to have more than one twirler in the top 10.

And they did the maroon and gold proud: Lantz, a sophomore, was named both College Miss Majorette of America and the Grand National Twirling Champion, and Blight, a junior, finished sixth overall in the Miss Majorette pageant.

Both twirlers will be featured with the Sun Devil Marching Band for the 2016-2017 season.

Some of the mysterious grooves on the surface of Mars' moon Phobos are the result of debris ejected by impacts eventually falling back onto the surface to form linear chains of craters, according to a new study.One set of grooves on Phobos are thought to be stress fractures resulting from the tidal pull of Mars. The new study, published this month in Nature Communications, addresses another set of...

Some of the mysterious grooves on the surface of Mars' moon Phobos are the result of debris ejected by impacts eventually falling back onto the surface to form linear chains of craters, according to a new study.

One set of grooves on Phobos are thought to be stress fractures resulting from the tidal pull of Mars. The new study, published this month in Nature Communications, addresses another set of grooves that do not fit that explanation. 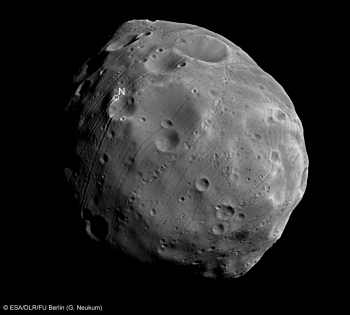 “The stunning thing about Phobos is all of its grooves and linear pitted chains,” said planetary scientist Erik Asphaug, of Arizona State University's School of Earth and Space Exploration, who co-authored the paper. “Because it orbits so close to Mars, we think it gets re-impacted by its own lost material whipping around the Mars system, like someone spitting in the wind.”

Phobos is an unusual satellite, orbiting closer to its planet than any other moon in the solar system, with an orbital period of just seven hours. Small and heavily cratered, with a lumpy non-spherical shape, it is only 9,000 kilometers from the surface of Mars (the distance from San Francisco to New York and back) and is slowly spiraling inward toward the planet.

Since the first detailed images were obtained in the 1970’s, there have been many suggestions for how Phobos got its grooves, but none of them have been able to explain all the different orientations and structures of Phobos’ crater chains.

When a small meteoroid strikes Phobos, forming an impact crater, the material ejected from the surface by an impact easily escapes the weak gravity of this moon. This material remains in orbit around Mars, most of it moving either just slower or just faster than the orbital velocity of Phobos. Within a few orbits the material gets recaptured and falls back onto its surface, but not before it has been stretched out into strands.

Asphaug, and lead Author Michael Nayak of UC Santa Cruz, developed computer simulations showing how prominent crater chains could result from the debris falling back onto the moon’s surface. The simulations enabled them to track, in precise detail, the fate of the ejected debris.

They were able to simulate an impact at the 2.6-kilometer crater “Grildrig,” near the moon’s North Pole, and found that the pattern resulting from ejected debris falling back onto the surface in the model was a very close match to the most prominent actual crater chain observed on Phobos.

"A lot of stuff gets kicked up, floats for a couple of orbits, and then gets recollected and falls back in a linear chain, before it has a chance to be pulled apart and disassociated by Mars gravity." Nayak said. "The controlling factor is where the impact occurs, and that determines where the debris falls back."

A new look at the geology of Phobos

These findings would imply that many of the ~100 m to ~1000 m craters on Phobos could be the result of re-impacts of material ejected from other craters. If that's the case, then the common idea of using the number of craters in a region as a proxy for surface age, could go out the window. 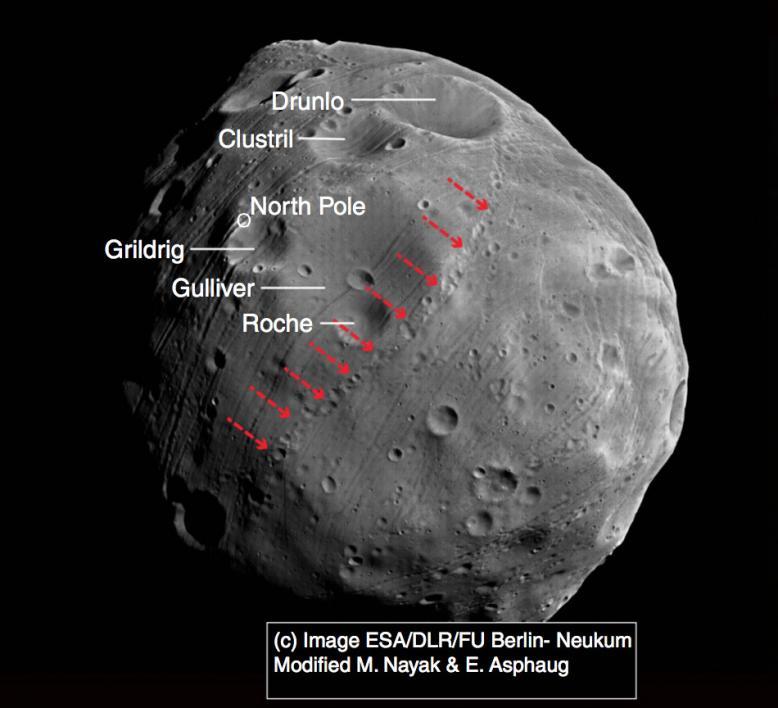 In this spacecraft image of Phobos, red arrows indicate a chain of small craters whose origin researchers were able to trace back to a primary impact at the large crater known as Grildrig. 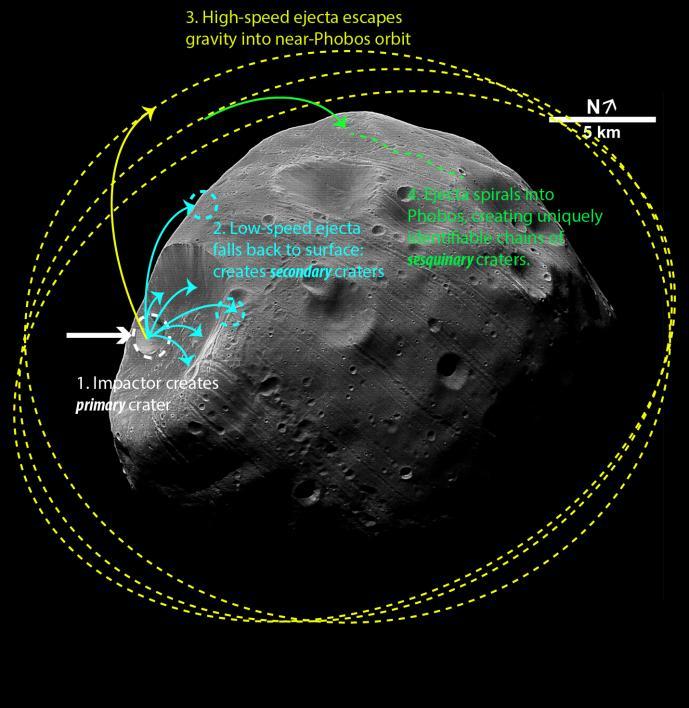 Orbits are illustrative only; not to scale.

“These findings give us a fresh set of eyes for looking at the geology of Phobos. Most experts think Phobos' surface is around four billion years old, because it is heavily cratered. If so, it formed eons ago and just sat there, being peppered by meteoroids. But if those craters come from Phobos' other craters, then it's quite feasible that the surface could be only tens of millions of years old, continually resurfaced,” said Asphaug.

This difference is important because the plan for human voyages to Mars seem increasingly to go through Phobos as a 'stopping point', where we can find resources and spend time planning for the descent to the Martian surface. “This may be a very bad idea,” said Asphaug “if the surface geology of Phobos is young, and potentially active.”

Asphaug suggests that Deimos, the more distant moon, would be a more boring, but more suitable, stopping point.

This work was supported by NASA and the Department of Defense through the NDSEG fellowship.