Ahuna Mons is a volcano that rises 13,000 feet high and spreads 11 miles wide at its base. This would be impressive for a volcano on Earth. But Ahuna Mons stands on Ceres, a dwarf planet less than 600 miles wide that orbits the sun between Mars and Jupiter. Even stranger, Ahuna Mons isn't built from lava the way terrestrial volcanoes are — it's built from ice.

"Ahuna is the one true 'mountain' on Ceres," said David A. Williams, associate research professor in Arizona State University's School of Earth and Space Exploration. "After studying it closely, we interpret it as a dome raised by cryovolcanism." 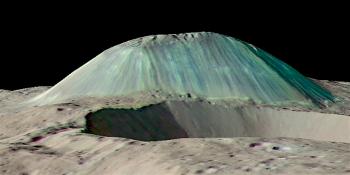 Volcanic dome Ahuna Mons rises above a foreground impact crater, as seen by NASA's Dawn spacecraft with no vertical exaggeration. Eruptions of salty, muddy water built the mountain by repeated eruptions, flows and freezing. Streaks from falls of rocks and debris run down its flanks, while overhead views show fracturing across its summit. Photo courtesy of Dawn Science Team and NASA/JPL-Caltech/GSFC Download Full Image

This is a form of low-temperature volcanic activity, where molten ice — water, usually mixed with salts or ammonia — replaces the molten silicate rock erupted by terrestrial volcanoes. Giant mountain Ahuna is a volcanic dome built from repeated eruptions of freezing salty water.

Williams is part of a team of scientists working with NASA's Dawn mission who have published papers in the journal Science this week. His specialty is volcanism, and that drew him to the puzzle of Ahuna Mons.

"Ahuna is truly unique, being the only mountain of its kind on Ceres," he said. "It shows nothing to indicate a tectonic formation, so that led us to consider cryovolcanism as a method for its origin."

Dawn scientist Ottaviano Ruesch, of NASA's Goddard Space Flight Center in Greenbelt, Maryland, is the lead author on the Science paper about Ceres volcanism. He says, "This is the only known example of a cryovolcano that potentially formed from a salty mud mix, and which formed in the geologically recent past."

Williams explained that "Ahuna has only a few craters on its surface, which points to an age of just couple hundred million years at most."

According to the Dawn team, the implications of Ahuna Mons being volcanic in origin are enormous. It confirms that although Ceres' surface temperature averages almost –40° (Celsius or Fahrenheit; the scales converge at this temperature), its interior has kept warm enough for liquid water or brines to exist for a relatively long period. And this has allowed volcanic activity at the surface in recent geological time.

Ahuna Mons is not the only place where icy volcanism happens on Ceres. Dawn's instruments have spotted features that point to cryovolcanic activity that resurfaces areas rather than building tall structures. Numerous craters, for example, show floors that appear flatter than impacts by meteorites would leave them, so perhaps they have been flooded from below. In addition, such flat-floored craters often show cracks suggesting that icy "magma" has pushed them upward, then subsided.

A few places on Ceres exhibit a geo-museum of features. "Occator Crater has several bright spots on its floor," said Williams. "The central spot contains what looks like a cryovolcanic dome, rich in sodium carbonates." Other bright spots, he says, occur over fractures that suggest venting of water vapor mixed with bright salts.

"As the vapor has boiled away," he explained, "it leaves the bright 1salts and carbonate minerals behind. " 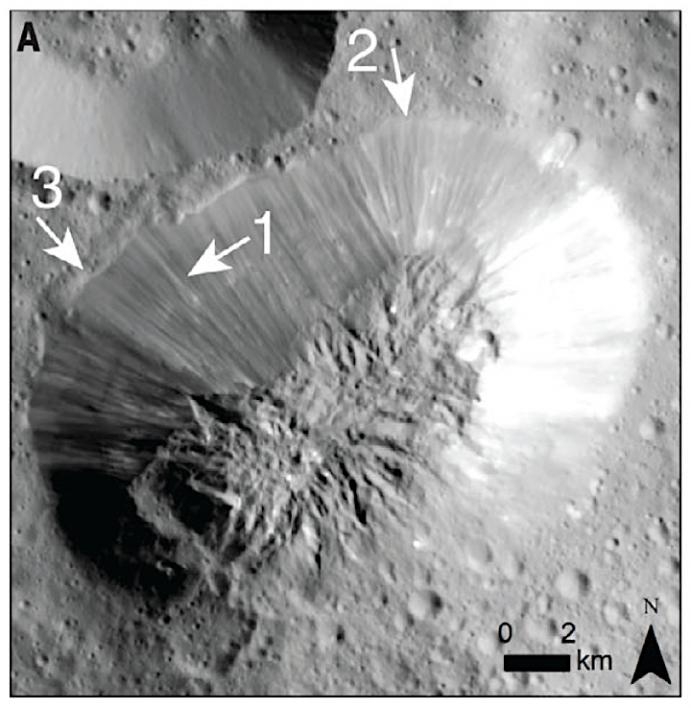 Dawn's Framing Camera looks down on the fractured summit of Ahuna Mons, tallest mountain on dwarf planet Ceres. The cracks on top suggest Ahuna grew by inflation: Icy freezing water pushed up inside the mountain, making a dome. (This image and the following two have the same scale and orientation, and are taken from the Science paper linked in the text.) 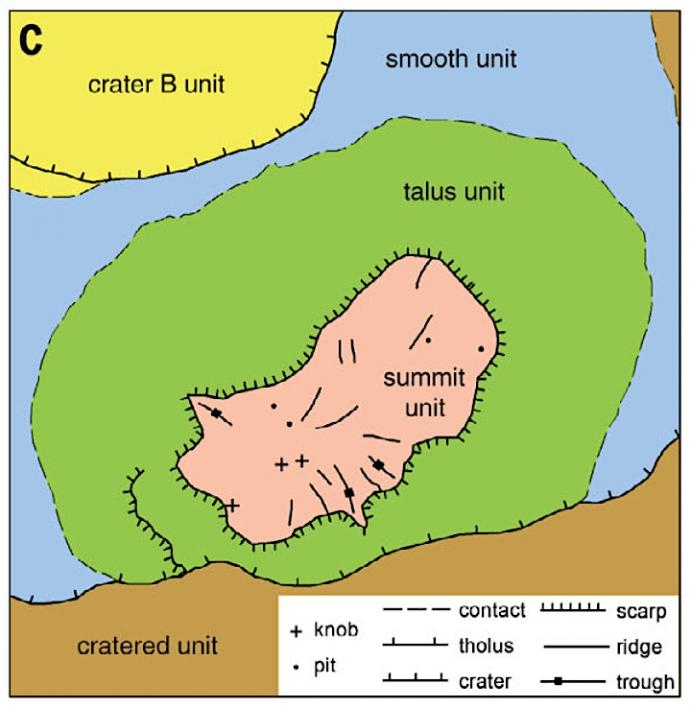 The geological map of the major units at Ahuna Mons will be filled in with more details as scientists continue to study this small world shaped by icy volcanism.

Although volcanic-related features appear across the surface of Ceres, for scientists perhaps the most interesting aspect is what these features say about the interior of the dwarf world. Dawn observations suggest that Ceres has an outer shell that's not purely ice or rock, but rather a mixture of both.

Recently, Williams was involved in research that discovered that large impact craters are missing, presumably erased by internal heat, but smaller craters are preserved.

"This shows that Ceres' crust has a variable composition — it's weak at large scales but strong at smaller scales," he said. "It has also evolved geologically."

In the big picture, said Williams, "Ceres appears differentiated internally, with a core and a complex crust made of 30 to 40 percent water ice mixed with silicate rock and salts." And perhaps pockets of brine still exist in its interior.

"We need to continue studying the data to better understand the interior structure of Ceres," said Williams.

Ceres is the second port of call for the Dawn mission, which was launched in 2007 and visited another asteroid, Vesta, from 2011 to 2012. The spacecraft arrived at Ceres in March 2015. It carries a suite of cameras, spectrometers and gamma-ray and neutron detectors. These were built to image, map and measure the shape and surface materials of Ceres, and they collect information to help scientists understand the history of these small worlds and what they can tell us of the solar system's birth.

NASA plans for Dawn to continue orbiting Ceres and collecting data for another year or so. The dwarf planet is slowly moving toward its closest approach to the sun, called perihelion, which will come in April 2018. Scientists expect that the growing solar warmth will produce some detectable changes in Ceres' surface or maybe even trigger volcanic activity.

"We hope that by observing Ceres as it approaches perihelion, we might observe some active venting. This would be an ideal way to end the mission," said Williams.

Year in Review: The case of the missing craters

A dwarf planet in the asteroid belt between Mars and Jupiter has a curious lack of big craters. ASU planetary scientist David Williams is on the case.

Year in Review: The case of the missing craters

Instead, as the spacecraft drew near to Ceres, a somewhat different picture began to emerge: Something has happened to Ceres to remove its biggest impact basins.

Now, writing in the online journal Nature Communications, a team of Dawn scientists led by Simone Marchi of the Southwest Research Institute in Boulder, Colorado, reports on their computer simulations of Ceres' history. These suggest that Ceres has experienced significant geological evolution, possibly erasing the large basins. The new finding suggests that Ceres interior structure and geological history are more complex than scientists has previously thought.

The Dawn team includes Arizona State University's David Williams, who is the director of the Ronald Greeley Center for Planetary Studies in ASU's School of Earth and Space Exploration. Wiliams oversees a team of researchers using Dawn data to map the geology of Ceres.

"When we first starting looking at Ceres images, we noticed that there weren't any really large impact basins on the surface," he said. None are larger than 177 miles across. This presents a mystery, he said, because Ceres must have been struck by large asteroids many times over its 4.5-billion-year history.

"Even Vesta, only about half of Ceres' size, has two big basins at its south pole. But at Ceres, all we saw was the Kerwan Basin, just 177 miles in diameter," Williams said. "That was a big red flag that something had happened to Ceres." 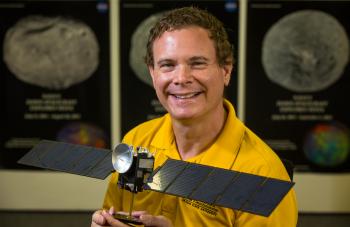 The Kerwan Basin's name was proposed by Williams, and it commemorates the Hopi Indian spirit of the sprouting corn.

Dawn lead investigator Marchi noted, "We concluded that a significant population of large craters on Ceres has been obliterated beyond recognition over geological time scales, which is likely the result of Ceres' peculiar composition and internal evolution."

Further study of Dawn’s images revealed that Ceres does have three large-scale depressions called "planitiae" that are up to 500 miles wide. These have craters within them that formed in more recent times, but the depressions could be left over from bigger impacts.

So what removed Ceres' large craters and basins?

"If Ceres were highly rocky, we'd expect impact craters of all sizes to be preserved. Remote sensing from Earth, however, told us even before Dawn arrived that the crust of Ceres holds a significant fraction of ice in some form," Williams said.

If Ceres' crust contained a large proportion of ice — especially if mixed with salts — that would weaken the crust and let the topography of a large basin relax and become smoother, perhaps even disappear.

In addition, Williams said, Ceres must have generated some internal heat from the decay of radioactive elements after it formed. This too could also have helped soften or erase large-scale topographic features.

He added, "plus we do see evidence of cryovolcanism — icy volcanism — in the bright spots found scattered over Ceres, especially in Occator Crater." Cryovolcanism behaves like the rocky kind, only at much lower temperatures, where "molten ice" — water or brine — substitutes for molten rock.

"It's possible that there are layers or pockets of briny water in the crust of Ceres," Williams said. "Under the right conditions, these could migrate to the surface and be sources for the bright spots."

For example, in Occator Crater, he pointed out, "the central bright spot is a domed feature which looks as if it has erupted or been pushed up from below."

NASA plans for Dawn to continue orbiting Ceres as the dwarf planet makes its closest approach to the Sun in April 2018. Scientists want to see if the increasing solar warmth triggers any activity or produces detectable changes in Ceres' surface.

"Ceres is revealing only slowly the answers to her many mysteries," Williams said. "Completing the geological maps over the next year, and further analysis of the compositional and gravity data, will help us understand better Ceres' geologic evolution." 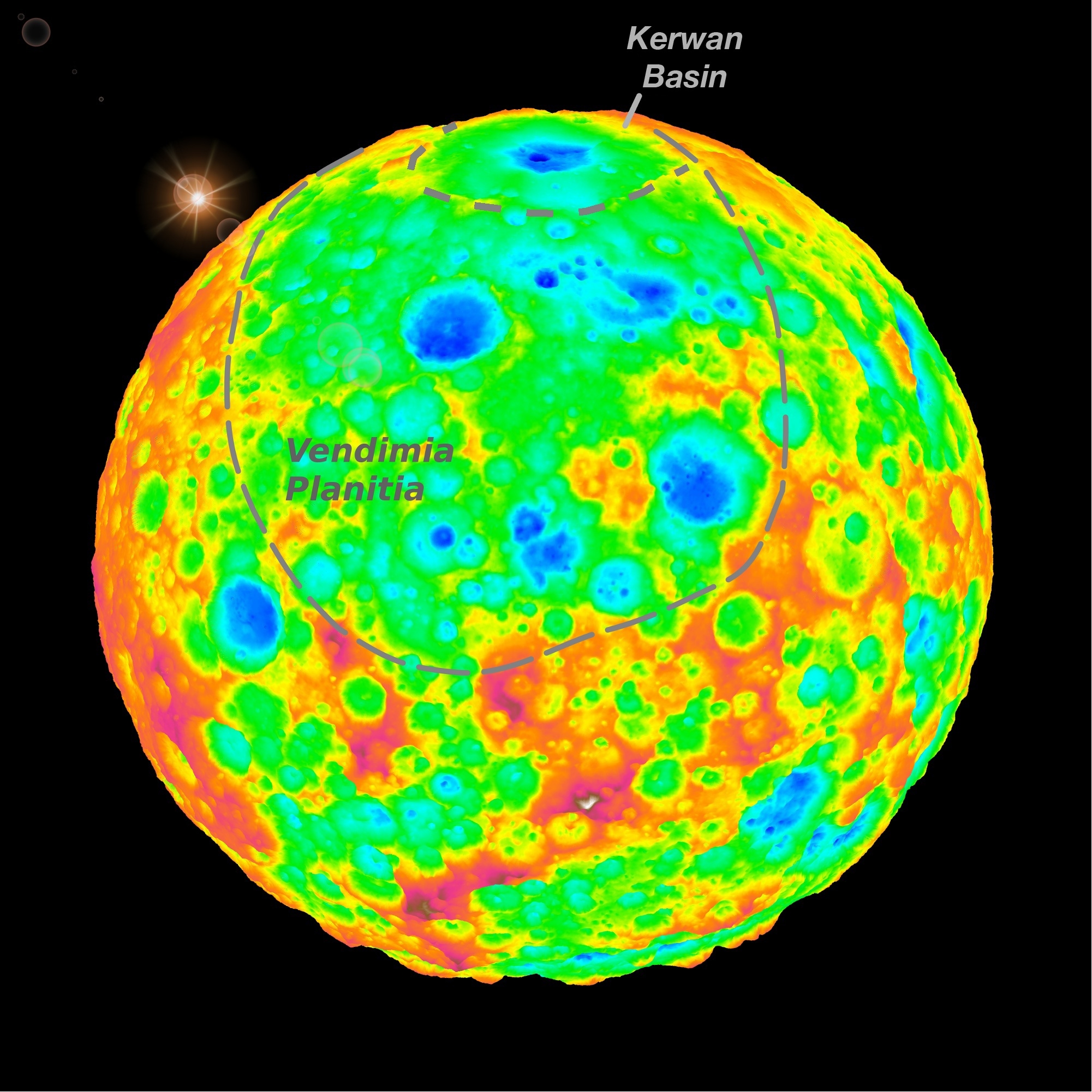 Colors reveal the elevations of craters and depressions on dwarf planet Ceres. The Kerwan Basin is just 177 miles wide, while the depression named Vendimia Planitia spreads about 460 miles across. Scientists were surprised to find Ceres generally lacking in large ancient impact features — the reason may lie in its composition and history. 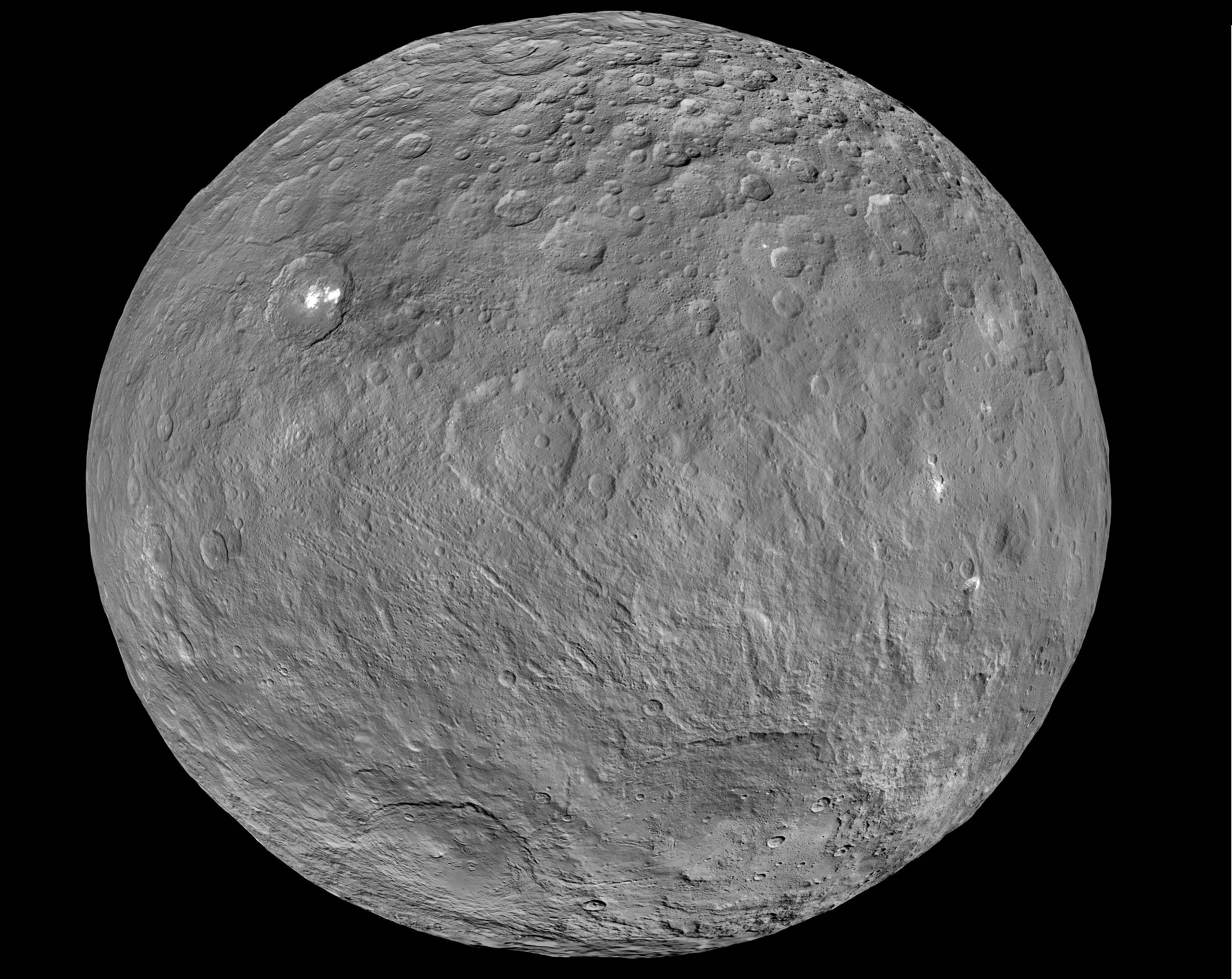 Occator Crater, seen at upper left, has two bright spots on its floor. These may be places where underground water or brine erupts on the surface as an ice-volcano. If the crust of Ceres contains a lot of ice, that could make it easier for the dwarf planet to erase its oldest and largest impact features.