Downtown Phoenix campus
Half of ASU's 7,000 incoming freshmen from Arizona are minorities, a first.
Crow: Community reaches full potential only when there is no opportunity gap.
August 31, 2016

The most significant issue limiting the nation is the inability to have equal educational attainment across all people, said Arizona State University President Michael Crow on Monday in Phoenix during a community dialogue with the Latino alumni group Los Diablos.

In the talk held in ASU’s newly opened Beus Center for Law and Society, Crow credited Los Diablos for helping remove financial barriers for students in Arizona by setting an unwavering path of commitment to providing scholarships.

“So to the leaders of Los Diablos, the founders, the present board and to others that are involved, I just want to say thank you,” Crow said.

Crow highlighted how ASU has built a research enterprise that now has more non-medical research dollars than Columbia University, Stanford, Princeton and the University of Southern California.

“We are now competing at the highest possible level,” said Crow. “So the Los Diablos fundraisers are raising funds to send fantastic students to a fantastic university from which there are no constraints, there are no limits — there isn’t anything that any student that comes here doesn’t have access to.” 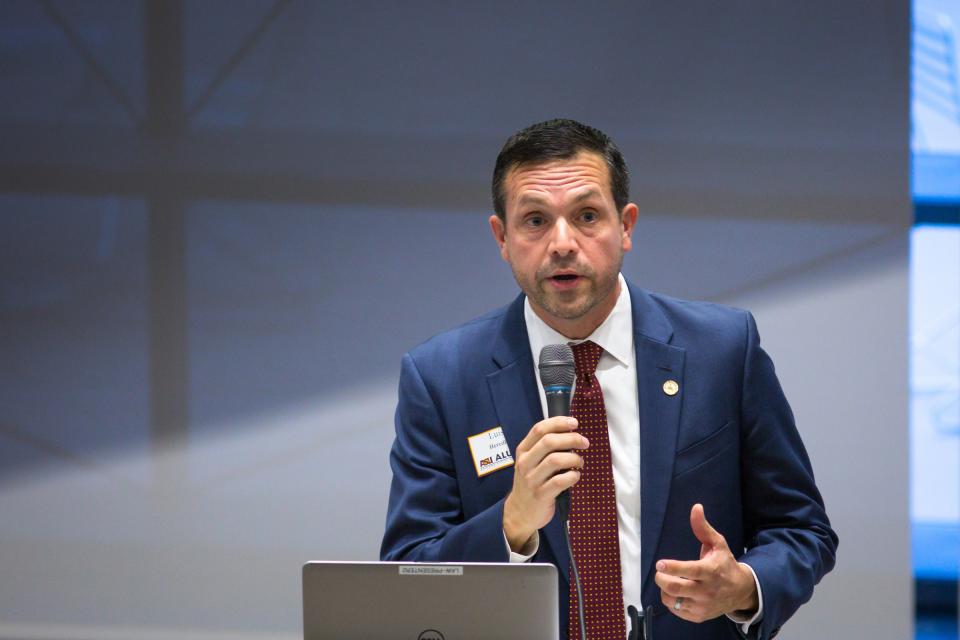 Los Diablos was founded in 1984 by a group of committed citizens, said group president Luis Heredia, ASU class of ’98.

“When our founding members founded Los Diablos, it was not about tailgates and social networking or happy hours,” Heredia said. “It was about funding scholarships. Because they knew that people had invested in them, and they knew that was the mission that needed to continue.”

The investment must continue.

Despite having a strong desire to achieve the American dream, Hispanics have the lowest educational attainment in Arizona, said Crow. College degree attainment stands at 17.84 percent, lower than all other races and ethnicities — whites (45.66), blacks (33.77), Asians (60.51) and Native Americans (19.47).

Low education keeps people in poverty.  Educational achievement is the most significant “predictive” variable to social mobility, said Crow. Without education, it is not likely that people will move up socioeconomically.

Demographic trends and today’s labor market demands make education an even more pressing issue not only for Hispanics but for the nation as a whole.

Between 2000 and 2050, the U.S. population is expected to grow by 156 million people, most from families of Hispanic origin.

That is the way the economy works, said Crow.

“It creates ideas and opportunities, and new ways of solving problems,” he said. “So this is fantastic. But we do not have the same kinds of educational attainment.”

“Our community will only reach its full potential when there is no gap between any person from any ethnic background, from any family income, and their ability to be raised up from an educational perspective.”
— ASU President Michael Crow

As the U.S. labor market continues to change, education will be key. Jobs for those with only a high school diploma or less have decreased by 20 percent since 2007, Crow said. In Arizona, 55,000 jobs open every year requiring training beyond high school. By 2020, 68 percent of all jobs in the state will demand the same.

ASU continues to expand education to all people who meet the school’s entrance requirements, said Crow. Half of this year’s 7,000 incoming freshmen from Arizona are minorities.

“This has never been attained in the history of the university — a 50 percent threshold of all of the freshmen from Arizona,” said Crow.

Crow said that 44 percent of the entire freshmen class and half of all the undergraduates at ASU are from the lower half of the family income category. In contrast, only 3 percent of the student body came from this socioeconomic group in 1990.

“Our community will only reach its full potential when there is no gap between any person from any ethnic background, from any family income, and their ability to be raised up from an educational perspective,” said Crow.

Los Diablos — the official Latino chapter of the ASU Alumni Association and an affiliate of the ASU Foundation — hosted Monday’s event. The sponsor was CopperPoint Insurance Companies, an Arizona provider of workers compensation insurance.

Ronnie Lopez, a member of CopperPoint’s board of directors, closed out the ceremony with parting words that summed up the evening’s message.

“Remember that Dr. Crow’s mission is ours,” he said. “That if we can break the chain of poverty through education, it will change generations forever.”