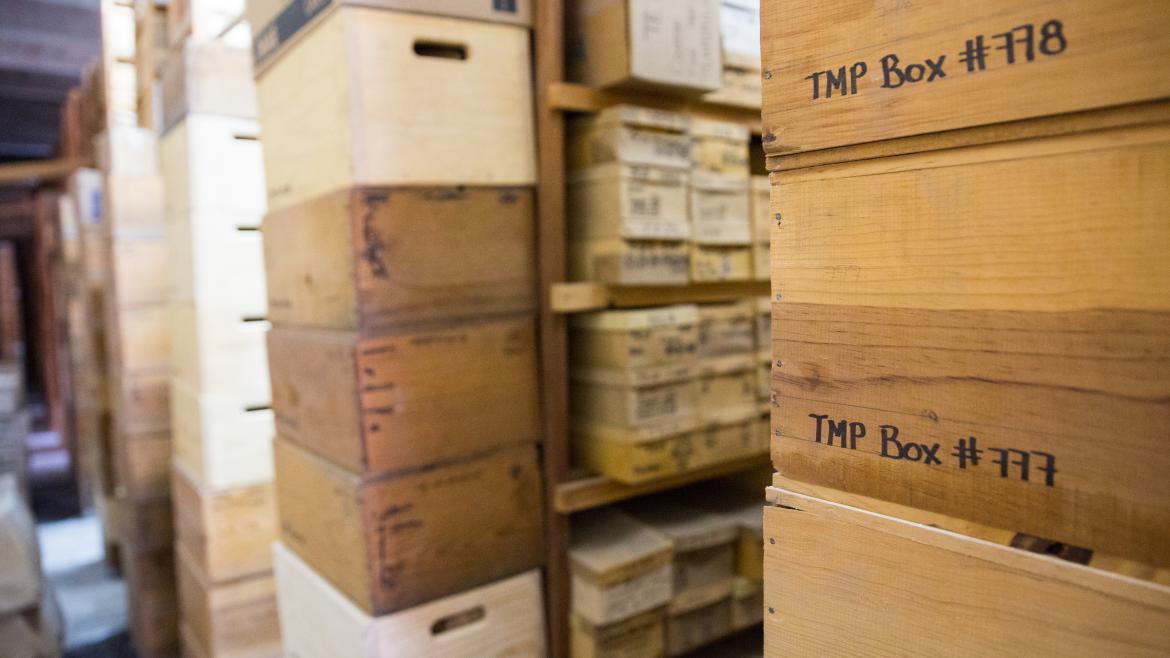 Editor’s note: This is the third in a three-part series on ASU’s archaeology lab in San Juan Teotihuacan, Mexico. Click for the first and second installments. Lab director Michael E. Smith will appear Wednesday in Tempe to talk about new discoveries; find event information at the bottom of this story.

Step into the storerooms of the Teotihuacan Research Laboratory and the first thing you will think of is the government warehouse at the end of “Raiders of the Lost Ark.”

Ask a normal person to organize this in some kind of coherent fashion and he would become physically ill. It’s a "Sorcerer’s Apprentice" task.

Enter Katie Rush and Lisa Gallagher. They are not normal people. They are master’s students in museum studiesRush and Gallagher's museum studies program is part of the School of Human Evolution and Social Change. at Arizona State University, and they spent more than a month this past summer organizing the vast collection of artifacts, which encompass excavations going back to the 1960s at the ancient city of Teotihuacan in Mexico.

Understand we are not talking simply about things like pots, masks and knives, which you might see in a museum. These boxes hold millions of potsherds, flakes of obsidian and the like, things that mean little to laypeople, but which archaeologists can conjure entire worlds out of.

Gallagher and Rush weren’t horrified when they saw the ocean of boxes. To give an idea, no one knows exactly how many boxes are in the collection. A ballpark estimate of 24,000 is the consensus.

“We knew what to expect,” Gallagher said. “I was very excited when I came into the lab and saw all the work that needed to be done. There’s a sense of pride to be able to come here and help organize these collections that mean so much to Mesoamerican researchers.”

“It’s kind of like a library with objects,” Rush said. “In the collectors’ world, you’ve either got too much info or not enough; there’s never a happy medium.”

They did a 33-day stint at the lab, which is part of ASU’s School of Human Evolution and Social Change in the College of Liberal Arts and Sciences.

“It’s time-consuming, but it’s not hard,” said Rush. “When you get the flow of things it goes pretty quickly.”

Each researcher cataloged their collection with their own system. What Gallagher and Rush did was create a uniform system for the entire collection. They organized boxes, did data entry and opened containers that hadn’t been opened in decades.

“We’re putting a uniform category on every box, so anyone can walk in the lab and know where it came from,” Gallagher said. “Our goal, when this is all done, is to have a master digitized inventory and have everything be under one uniform catalog.”

Unlike objects in a museum, these artifacts will be moved and handled and unpacked and repacked. It’s not organized for visitors to gawk at; it’s organized for maximum effectiveness for researchers.

For example, there are sample boxes of every type of Teotihuacano pottery: thin orange, gulf fine paste, Metepec. Trading across Mesoamerica was widespread. Researchers from a Mayan dig in southern Mexico might want to visit and see if what they have is from Teotihuacan.

“People want to come and see Teotihuacan pottery looks like,” lab director Michael Smith said. “A lot of people come to consult these.”

“Working with these boxes, it’s not your typical collection,” Gallagher said. “This is a different perspective on collections management. ... It’s designed to be used.”

Smith came to a museum studies class last spring and gave a presentation on Teo and offered two internships to sort out the collection.

“There’s not too many opportunities for students to go out of the country and work in different labs,” Gallagher said. “This is definitely a unique opportunity.”

Rush had done an internship at a museum in Dublin, so she jumped at the chance. She wasn’t familiar with Mesoamerican history and culture before working at the lab.

“It’s very fascinating, and the site is really cool,” she said.

What: "New Views of the Ancient City of Teotihuacan" lecture. 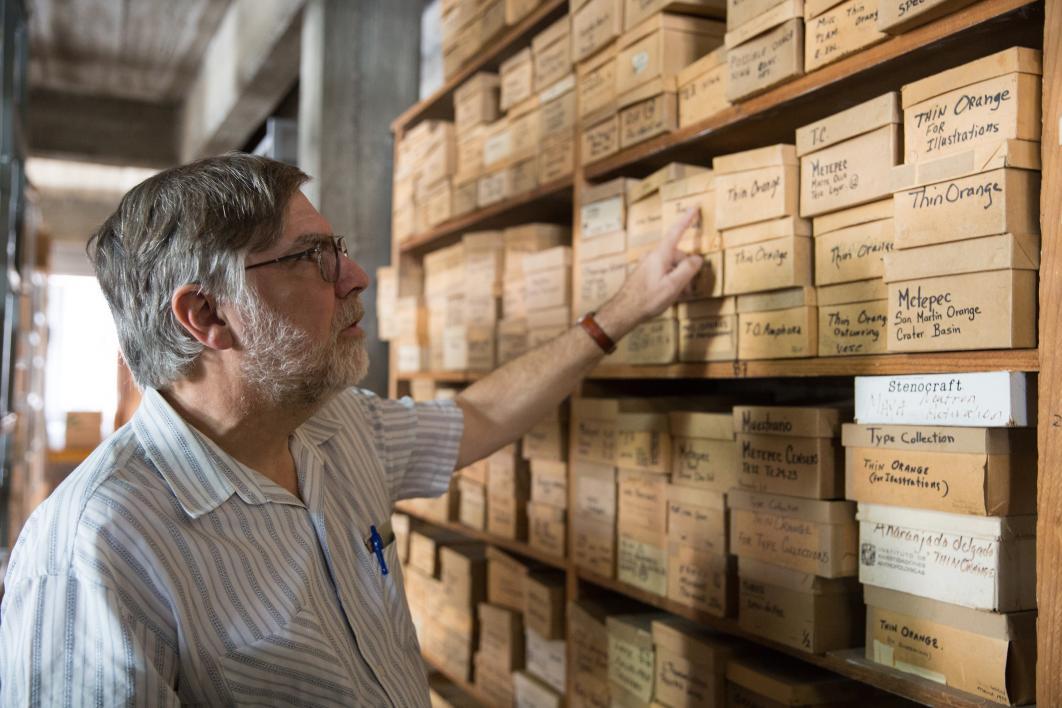 Lab director Michael Smith points out the many boxes of archived materials, encompassing excavations going back to the 1960s at the ancient city of Teotihuacan in Mexico. 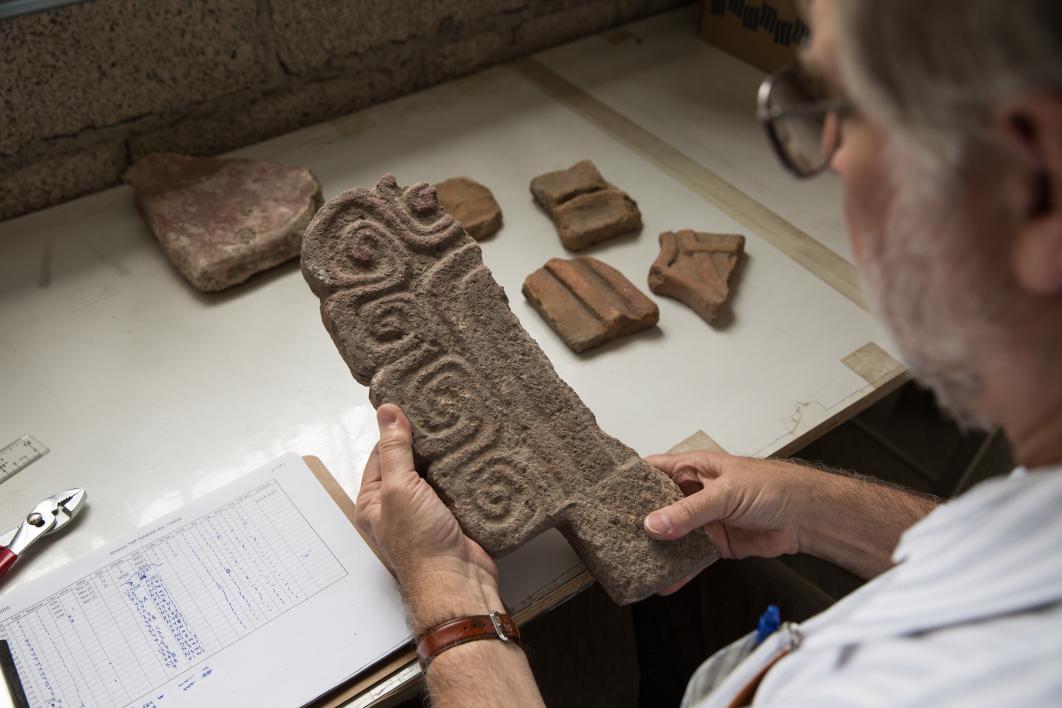 ASU professor and lab director Michael Smith looks at part of an almena, or roof ornament, at the ASU Teotihuacan Research Laboratory in July. 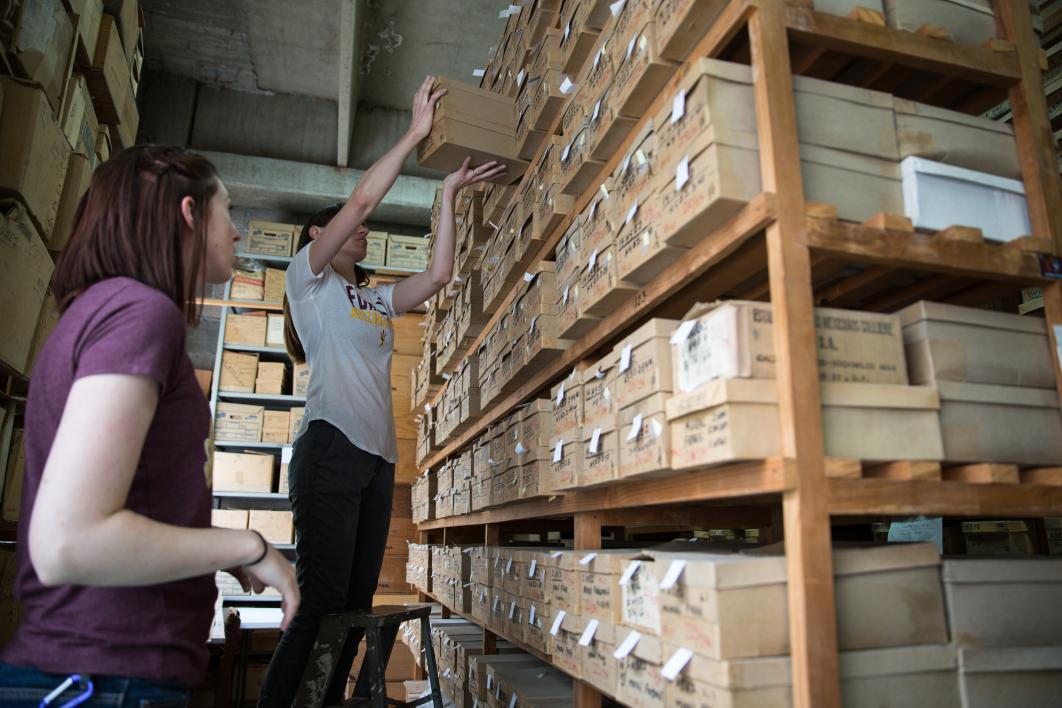 ASU graduate students Katie Rush (left) and Lisa Gallagher did a 33-day stint at the lab this summer, bringing a unified system of organization to the collection. There are roughly 24,000 boxes stored at the lab.

Details: Free and open to the public. Find more at the events site.

How to plan a happy neighborhood

Eating your vegetables can make you healthy. Growing them can make you happy.That's one of the things Arizona State University assistant professors Deirdre Pfeiffer and Scott Cloutier found as they researched the secrets to planning a happy neighborhood.The interdisciplinary pair outlined their findings in a paper recently published in the Journal of the American Planning Association, a top-ranked... 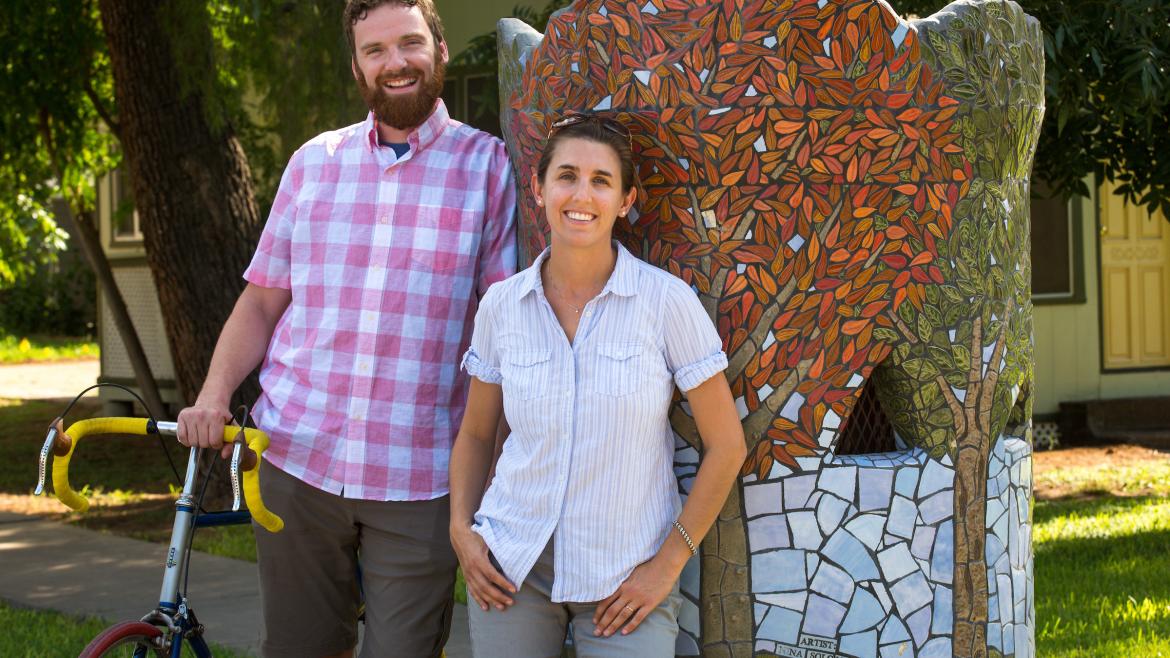 How to plan a happy neighborhood

That's one of the things Arizona State University assistant professors Deirdre Pfeiffer and Scott Cloutier found as they researched the secrets to planning a happy neighborhood.

The interdisciplinary pairDeirdre Pfeiffer is an assistant professor in the School of Geographical Sciences and Urban Planning, an academic unit of the College of Liberal Arts and Sciences. Scott Cloutier is an assistant professor in the School of Sustainability. outlined their findings in a paper recently published in the Journal of the American Planning Association, a top-ranked journal in urban development and urban studies, and have put them into action in the metro Phoenix area — including building raised garden beds for a widow who had lost her passion for gardening when she lost her husband.

In the paper, Cloutier and Pfeiffer (pictured above) identify three key planning-related factors that promote happiness: access to open and green space, environmental design that promotes social interaction, and places that are safe and secure.

“There’s a long history in urban planning of researching how to design a neighborhood to promote health,” said Pfeiffer but it usually focused on physical health, with planners prioritizing things like adding more sidewalk space to combat obesity.

Pfeiffer said she and Cloutier saw a real opportunity to take advantage of a space where other planners had been missing out: how the design of a neighborhood can promote mental health.

So together, they culled and analyzed an extensive amount of existing data from studies looking at the correlation between happiness and lifestyle factors. They ended up finding some consistent themes, which helped them to identify the three key planning-related factors.

The first factor, access to open and green space, Pfeiffer says includes things like parks and places where people can recreate, as well as places of “wonder and self-exploration,” such as an open field.

“There are so many tangential benefits that come along with being in nature,” added Cloutier. “It gives people space to disconnect form everyday life and connect with community and their inner self.”

The second factor, environmental design that promotes social interaction, refers to things like houses with front porches or shared lawns; features that enable people to happen upon each other and engage in social interaction.

The third factor, safety and security, refers to things like adequate lighting and safely designed crosswalks.

In their research, Pfeiffer and Cloutier also suggest strategies planning professionals can use to measure all three “happiness” factors, and evaluate the extent to which proposed plans, policies and projects would lead to better health outcomes.

In particular, they describe a tool that they’ve developed and used, the “Sustainability through Happiness Framework.” The tool complements health impact assessments – a more widely-used planning tool – by allowing planners to engage with neighborhood residents, and collaborate with them to better understand and implement changes that will create happy places to live.

It could be “something as simple as putting in a stop sign,” said Cloutier, who each semester brings together ASU students, local non-profits, organizations and government entities to help improve local communities.

Using the Sustainability through Happiness Framework has led to improvements that include canal beautification, safety and education programs, improved lighting, introducing solar power and carving out social spaces for residents.

“Everyone's happy, content to consume homegrown produce, backyards are clean, hazardous garbage is properly disposed of, and there is peace and order,” one Valley resident said of the positive changes in her Tempe neighborhood.

Pfeiffer and Cloutier are optimistic about the effect their study may have on future inquiry.

“It’s just such a rich territory for further research,” said Pfeiffer. “One of our hopes is that by publishing this study, we’ll influence other researchers” to look further into the area.