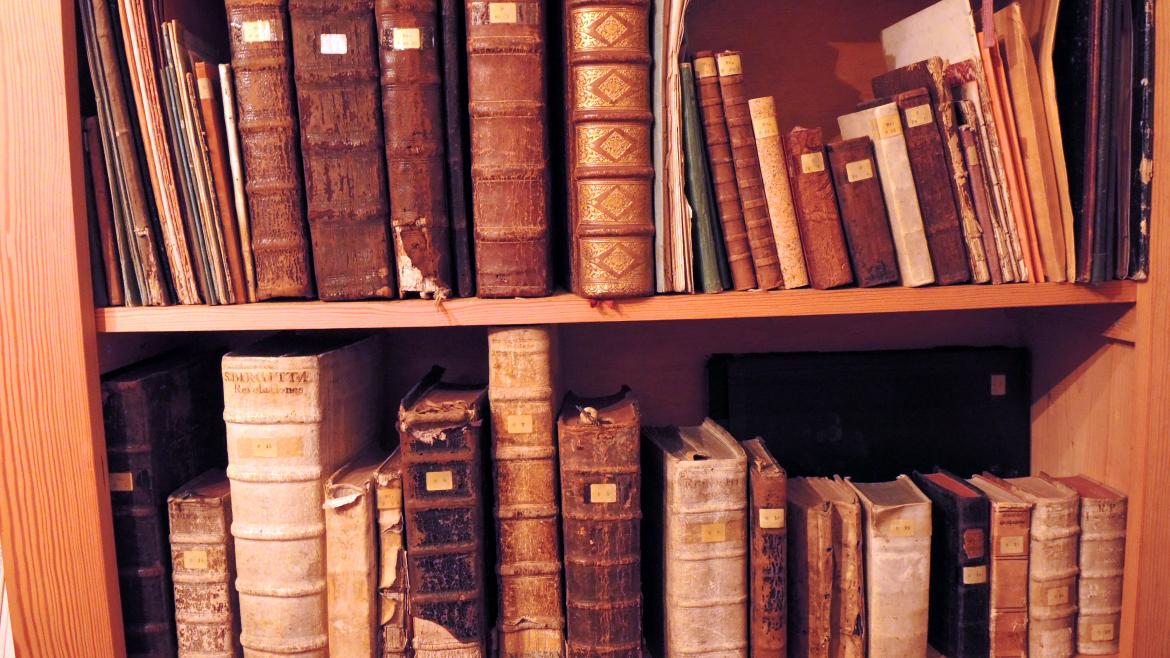 An Arizona State University-led international research team is advocating for the protection of a newly uncovered trove of centuries-old Catholic texts that could greatly contribute to the world's collection of art and music from the Middle Ages.

The team discovered the previously unknown manuscripts, which date back to the 15th century, on the final stop of a tour of German monasteries late last year. The books include volumes adorned with gold leaf, and detail ancient rituals and devotional images that promise to expand what researchers can say about spiritual life for medieval women.

Professor Corine Schleif, who studies art history at ASU’s Herberger Institute for Design and the Arts, called the find at a monastery northwest of Munich “a sensational discovery.”

“I never expected in my lifetime to find this amount of unknown material,” she said.

Schleif and her colleagues immediately volunteered to catalog and digitize the collection, saying some of the books uniquely show how images and symbols were adopted by nuns of the Brigittine Order — the only group to compose liturgy for medieval women.

At the outset of conservation work in December, however, it was announced that the monastery was being permanently closed because few nuns remained there. The statement leaves the fate of the ancient library unclear and cuts off access for researchers.

“We hope,” Schleif said, “that by making the existence of this rare treasure known to the scholarly community and to the public at large, efforts will be made to continue the collection as an ensemble, to take any and all necessary measures to maintain and preserve the books and to ensure that the works are safe and accessible by placing them in an appropriate institutional library.” 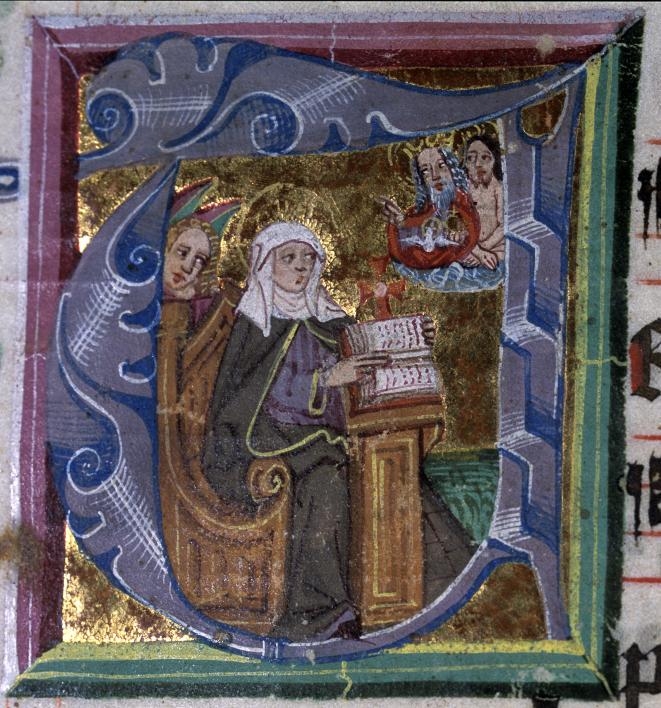 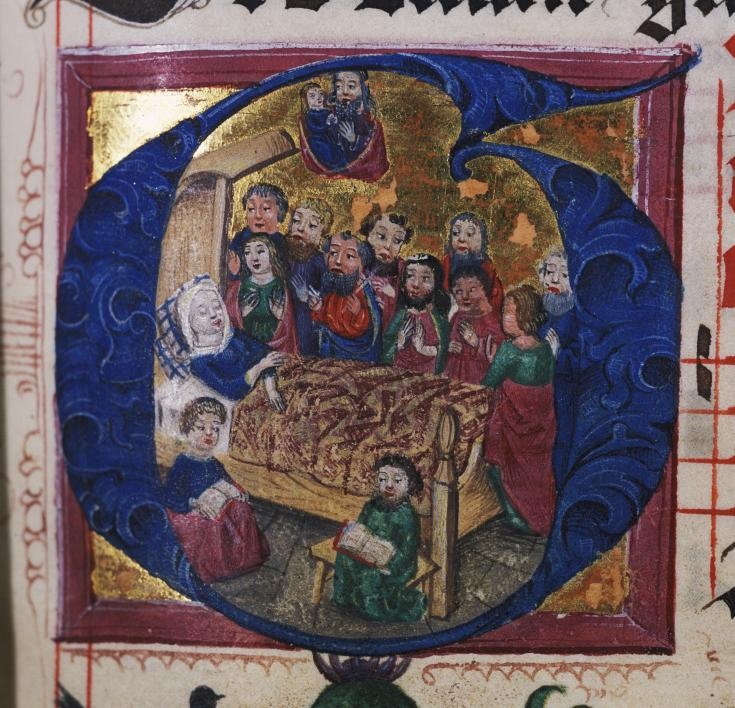 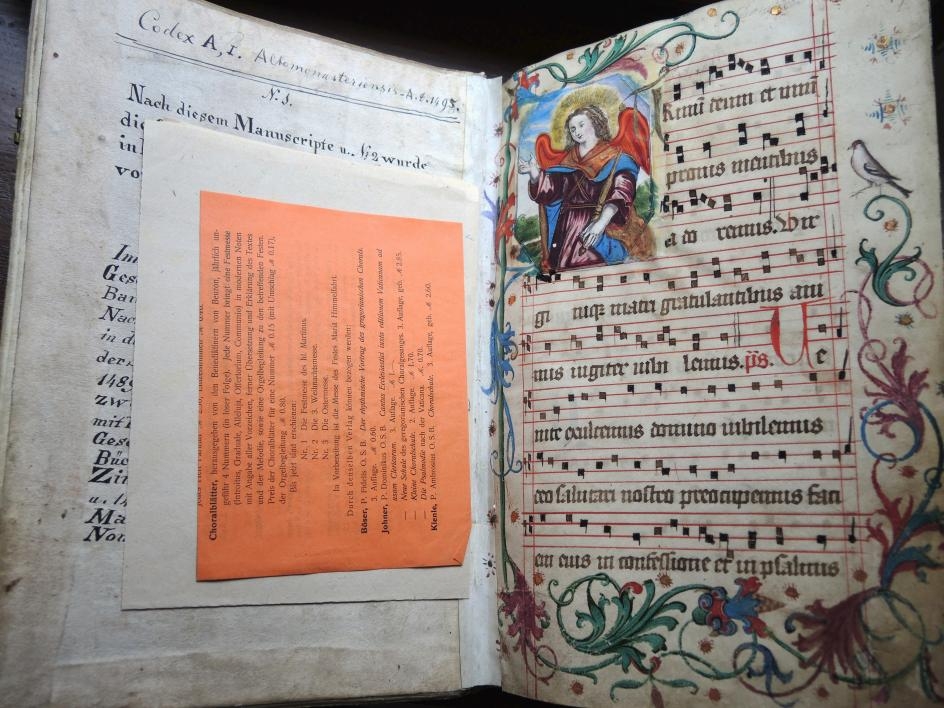 Birgittine antiphoner, 15th century (initial cut out and replaced with a Baroque image). 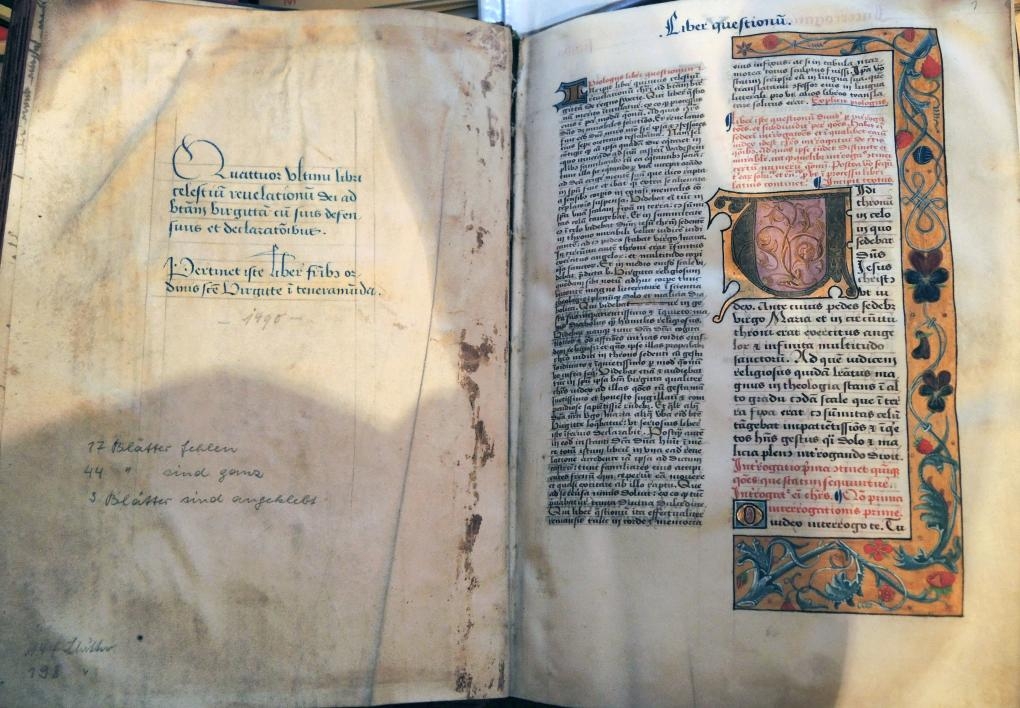 Final volume of a four-volume edition of the Revelations of Saint Birgitta, beginning of Book of Questions (Revelations Book 5), 15th century, originally owned by the Birgittine brothers of Maria Troon in Dendermonde, Belgium. 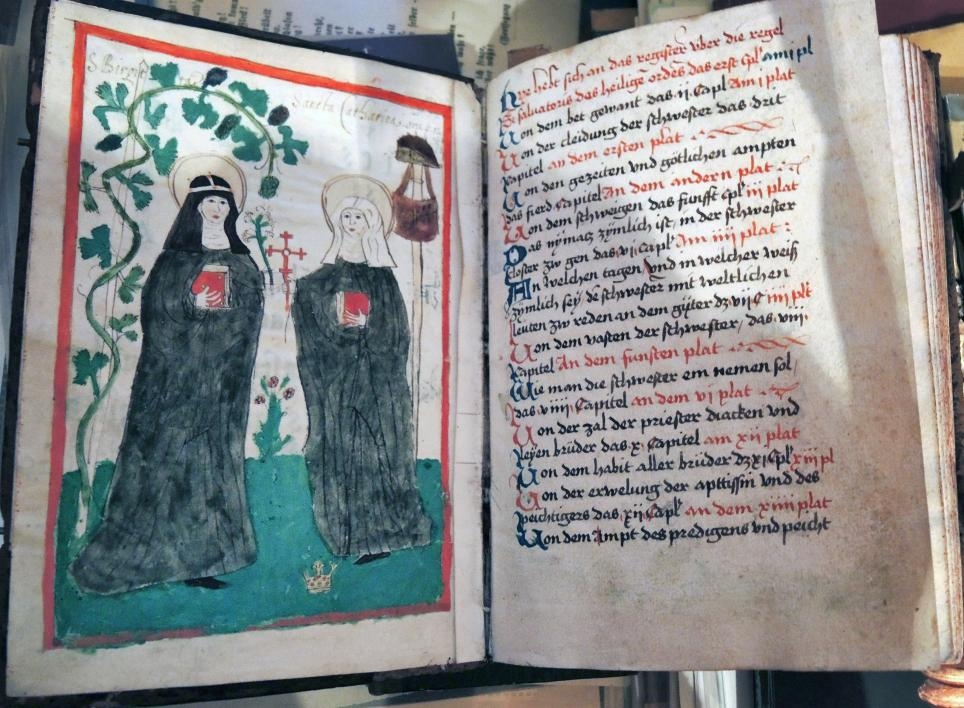 Ideally, that would include digitizing the library’s most important books so they could be accessed anywhere — an undertaking Schleif and ASU visiting faculty Volker Schier, a musicologist working in the Institute for Humanities Research, completed with their earlier project “Opening the Geese Book,” a multisensory work for researchers, students and broader audiences to explore an illustrated, two-volume liturgical manuscript from 1510.

This time, they hope to build an immersive, virtual-reality platform called “Extraordinary Sensescapes” to provide insight into questions about the music, art, history, architecture and practices of the Brigittine nuns. Plans include a 3-D virtual model of a prototypical church and acoustic renditions of sounds in the space.

The team, also guided by Catholic University of Leuven (Belgium) postdoctoral researcher Karin Strinnholm Lagergren, uncovered the texts after being invited into the library at Birgittenkloster Altomünster, a vast 11th-century monastic complex for the Catholic order of Benedictine Sisters and later occupied by nuns from the Brigittine Order. The complex is the oldest continuously inhabited community of its kind, as many such monasteries were dissolved following the Protestant Reformation, destroyed in central Europe’s Thirty Years’ War or shuttered during the early 19th-century secularization of Germany.

The invitation came as a surprise, since the collection had been traditionally off-limits to visitors.

With the monastery shuttered, there is concern that the dozens of books could be sold to private dealers. However, representatives from the Bayerische Staatsbibliothek in Munich, the state library of Bavaria and one of the largest in the world, plan to investigate each object to determine if it can be claimed by Germany and brought to the library's special collections.

Top image: Shelves with manuscripts in the library of the Brigittine monastery at Altomünster, Germany. Courtesy of Eva Lindqvist Sandgren.

Weeks ahead of Women’s Equality Day, President Barack Obama amplified the national conversation around gender rights with an essay in Glamour magazine that declared he “is what a feminist looks like.”Women’s rights advocates praised the move as showing a willingness to acknowledge an issue that they say people in power often overlook.Partisan politics aside, Arizona State University instru... Weeks ahead of Women’s Equality Day, President Barack Obama amplified the national conversation around gender rights with an essay in Glamour magazine that declared he “is what a feminist looks like.”

Women’s rights advocates praised the move as showing a willingness to acknowledge an issue that they say people in power often overlook.

Partisan politics aside, Arizona State University instructor Mako Ward said that “while feminism has historically been championed by advocates who tend to be liberal in their political beliefs, as a movement its core is about advocating for equal rights for all people, which is nonpartisan in scope.”

For more than 40 years, Women’s Equality Day has been observed on Aug. 26, calling attention to disparities in upward mobility, reproductive rights and political representation. ASU experts have researched and discussed a range of pressing concerns around women’s rights. Here are some of their perspectives:

Women have come a long way in the workplace. As Obama writes, since the 1960s “we’ve gone from a job market that basically confined women to a handful of often poorly paid positions to a moment when women not only make up roughly half the workforce but are leading in every sector.”

The report also found that female CEOs are far more likely to experience “shareholder activism” — being pressured and second-guessed by company shareholders — than men occupying the same leadership position.

Shropshire called the results “depressing” but noted that “awareness is a good first step.”

For women and gender studies professor Mary Margaret Fonow, the gender wage gap is the biggest hurdle. She said that women are heads of about half of all households and therefore have major financial responsibilities, so “it’s a particularly serious issue,” she said, noting that women are “still concentrated in too few occupations, and that contributes to the gender gap.”

The role of race and class

“It’s very difficult to talk about women, in general, because race and class play such an important role in shaping women’s experiences,” Fonow said.

Things such as affordable housing and access to child care can greatly affect a woman’s personal and professional success, and those things are most often determined by race and class.

Gender inequalities in the sports arena are glaringly obvious. Ward — who teaches a course on race, gender and sport — said while 40 percent of athletes are female, they receive just 4 percent of sports media coverage.

And oftentimes that coverage is less about their performance and more about their appearance. At this year’s Rio Summer Olympics, participants in women’s beach volleyball were getting media attention because some had chosen to dress more conservatively in long sleeves and hijabs instead of bikinis.

“Even though we’ve seen major strides since Title IX … there is still all this talk about what women are wearing,” Ward said.

The objectification of female athletes is nothing new. Fonow said the women’s baseball league that developed during World War II required players to attend charm school so as not to appear too masculine on the field.

A real shame, since, as Fonow notes there is “a lot of research that shows women’s participation in sports” has many positive impacts, including “increased self-confidence, and [lessening] of early pregnancies, eating disorders and suicides.”

Both Ward and Fonow agree that having more women in leadership and decision-making roles can only help the feminist movement.

“Women’s perspectives are needed if we’re going to solve” any of a host of world issues, Fonow said. “Any issue you can think of, you have to have a diversity of people at the table when you’re coming up with solutions.”

Another thing they agree on is the power of social media and globalization in the movement.

“Activists are more networked now than they’ve ever been,” said Fonow, while Ward pointed to the popular “girlboss” hashtag, which promotes women taking charge, though she cautions it can lean toward an individualized level of thinking when the feminist movement can only make real progress when women come together as a community to work for change.