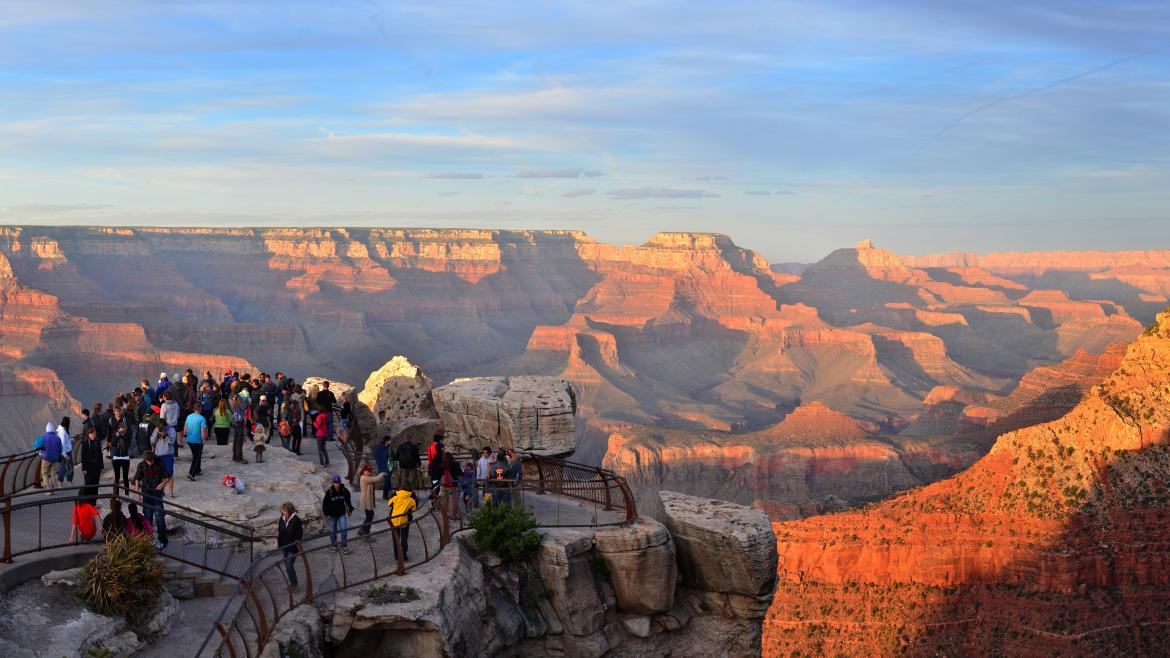 100th birthday of our national parks: What does the century ahead hold?
See the national parks in a new way with ASU visual projects, research.
ASU research covers topics including visitor use, interpretation and technology.
August 24, 2016

Before she laid eyes on the spectacular Old Faithful geyser, Megha Budruk sought out a specific area far from the throng of tourists when she first visited Yellowstone National Park in Montana.

At that quiet, lonely junction of two rivers in 1870, a group of explorers was struck by the insight that the stunning landscape around them should be preserved forever. Decades later, on Aug. 25, 1916, Congress passed the National Park Service Organic Act, creating the agency that cares for those natural treasures.

This week, as the National Park Service marks its centennial, the federal agency is working hard to balance its twin mandates of forever preserving the most beautiful and historic sites in the country, while at the same time ensuring that everyone gets an opportunity to see them. As visitation soars, especially at the “crown jewel” parks such as the Grand Canyon in Arizona, the park service is dealing with the pressure to accommodate all those people in a sustainable way.

To face that challenge, the agency relies on research to guide its decisions. Over the past few years, Budruk and other ASU faculty and students have studied big-picture issues in the parks including visitor use, the changing nature of interpretation, and the role of technology in saving the parks.

“We welcome research projects from academia,” said Jeffrey Olson, a spokesman for the National Park Service. “That independent research by universities is vital to helping us understand all of these natural systems and landscapes.”

Meanwhile, Budruk, who takes students to national parks abroad during the summers, said the National Park Service needs to reflect on its next 100 years.

“We talk about the national parks as America’s greatest idea,” she said.

“'How do we stay relevant?’ is what they’re trying to figure out.”

Americans love the national parks. One of the biggest challenges facing the National Park Service is the crush of crowdsAt the 372 parks, cultural and historic sites managed across the country by the agency, visitors increased 12 percent from 2005 to 2015, according to National Park Service statistics. At the iconic parks, the increase in that 10-year span was even greater: 25 percent at Grand Canyon, 26 percent at Yosemite National Park in California and 44 percent at Yellowstone..

“What does that mean for providing things like trails, visitor centers and hotels, but to do so in a way that leaves these places preserved for the future?” asks Dave White, a professor in the School of Community Resources and Development and director of the ASU Decision Center for a Desert City. He has done several research projects in the parks with ASU students. ASU professor Dave White (left) worked with Jim Bacon of the National Park Service and Jill Wodrich and Carena Van Riper, then ASU students, at Yosemite National Park a few years ago. The group conducted social science research to inform planning and management for Yosemite, and the project formed the basis of Wodrich's master's thesis. Van Riper went on to earn a doctorate and now conducts National Park Service research as a professor at the University of Illinois.

A critical problem is that at some locations, many visitors are stuffed into a tiny portion of a vast park.

“Yosemite Valley is less than 1 percent of the area of the park and receives 90 percent of the visitors,” he said. That can create an almost urban environment.

His research in Yosemite found that more than 90 percent of visitors arrive and travel in private cars — and that’s how they like it.

“When surveying visitors, three-quarters of them identified ‘scenic driving’ as a primary activity within the park,” he said. His research from 2006 found that visitors found the park’s shuttle buses inconvenient and crowded, but were happy the bus system eased environmental impacts.

White’s research projects have found one key point: For their survival, the parks need to make a connection with visitors, who must understand what makes that site special.

“Why this park? What are the defining characteristics of the natural landscape and cultural history? It helps them to understand that they have a role in preserving the special quality of that place over time,” said White, who works with the parks in projects that help the National Park Service set policy.

“Nudging” people out of their cars and into nature is one way to do that.

“But in many national park sites, even in the iconic parks, the average visitation time can be five hours or half a day. One of the challenges is getting people to engage the park experience beyond the very surface,” White said.

While Americans flock to Grand Canyon to view a landscape that’s timeless, the way they understand it is constantly changing.

Paul Hirt, a professor of history, has studied the history of interpretations at parks and historical sites.

“For a long time the Grand Canyon was interpreted as a geological wonder,” said Hirt, senior sustainability scholar in the School of Sustainability.

Later, the park hired Navajo and Hopi Indians to add cultural interpretation. In the 1970s, the park’s desert-adapted ecosystem became more highlighted. In the 1980s, the park added an interpretive site that detailed visibility issues and sources of air pollution, and Congress voted to regulate helicopter flights.

“Suddenly we had to ask ourselves, is peace and quiet a value that we want to protect in our national parks?” Hirt asked.

“We interpret the parks through the lens of the issues that face us at any moment in history. The ranger talks or brochures are shaped by the issues and concerns of the day, and those change all the time,” added Hirt, who received a grant from the National Endowment for the Humanities to create a website of interpretative history about Grand Canyon National Park.

The National Park Service’s historical and cultural sites were preserved because they were meaningful to people at one point in time.

“But maybe a generation or two later, meanings have changed. And how we share and interpret that site to visitors has to change,” Hirt said.

He gave as an example the Whitman Mission National Historic Site near Walla Walla, Washington, which was established in 1936 as a memorial to a group of Methodist missionaries who were slain by Native Americans in 1847. Later, the events were reinterpreted to include the views of the Cayuse Indians, who faced disease and the loss of land after the missionaries arrived. 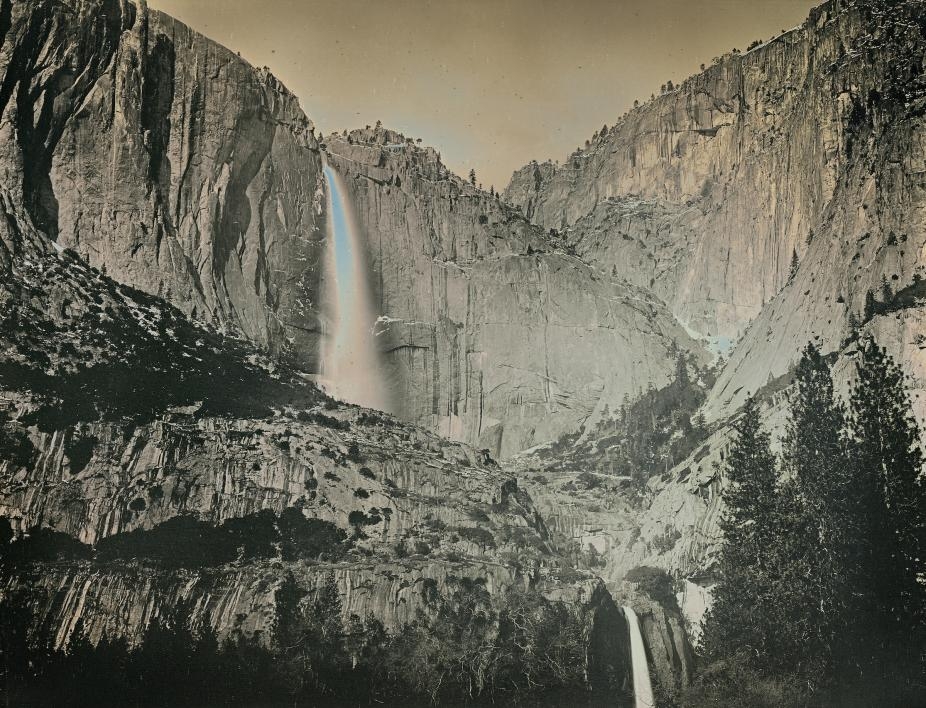 A daguerreotype of Yosemite National Park in California created by ASU assistant professor Binh Danh. The process utilizes a silver-coated copper plate with the highlights of the image being the bright portions of mirror still exposed. 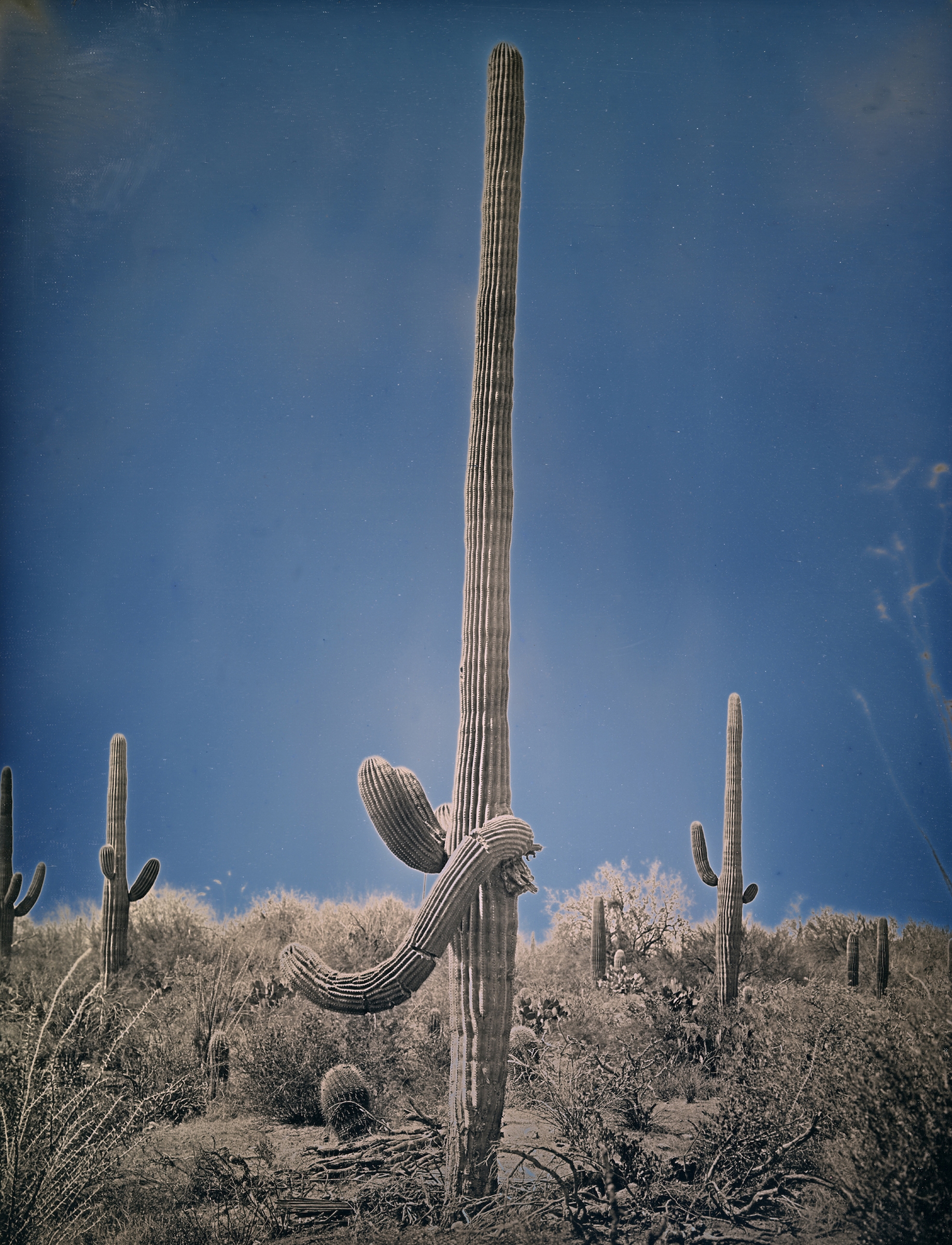 A daguerreotype of Saguaro National Park in southern Arizona. 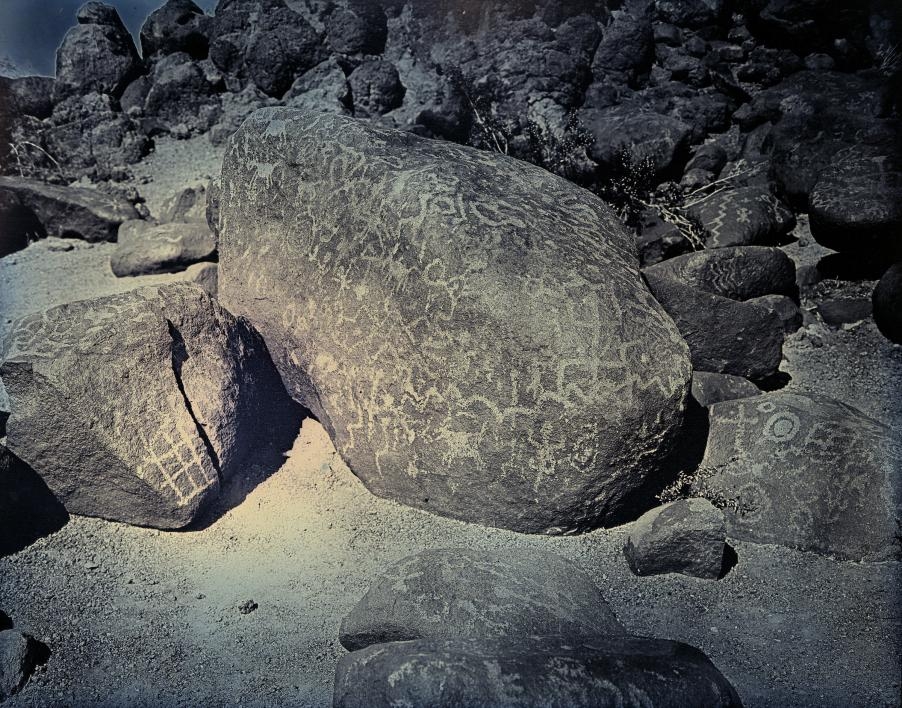 An old technique for an even older subject: a daguerreotype of Painted Rock in Arizona. 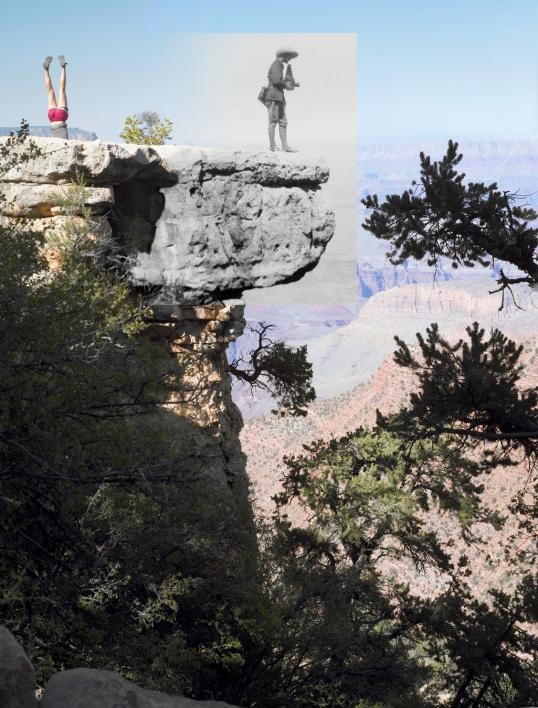 Another combination of modern and vintage photos of the Grand Canyon. 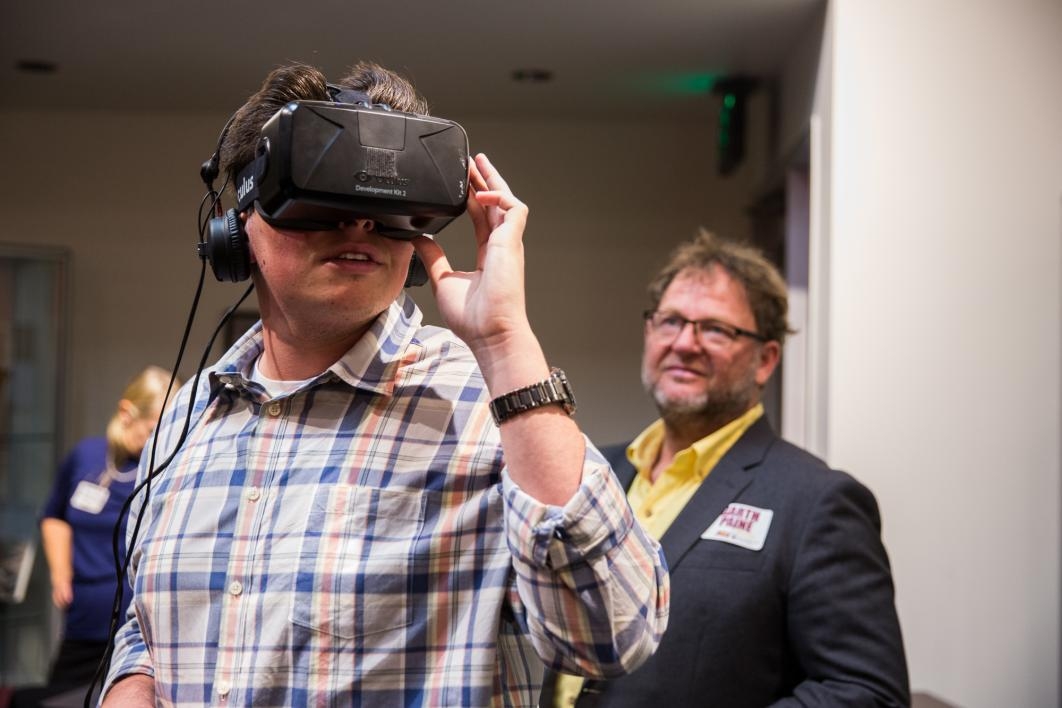 Sports journalism senior Kody Acevedo tries out EcoRift while its creator, ASU associate professor Garth Paine, looks on during Innovation Day at the Walter Cronkite School of Journalism and Mass Communication on Jan. 20. Virtual-reality technology such as this allows people to "visit" national parks without putting strain on the ecosystem there. 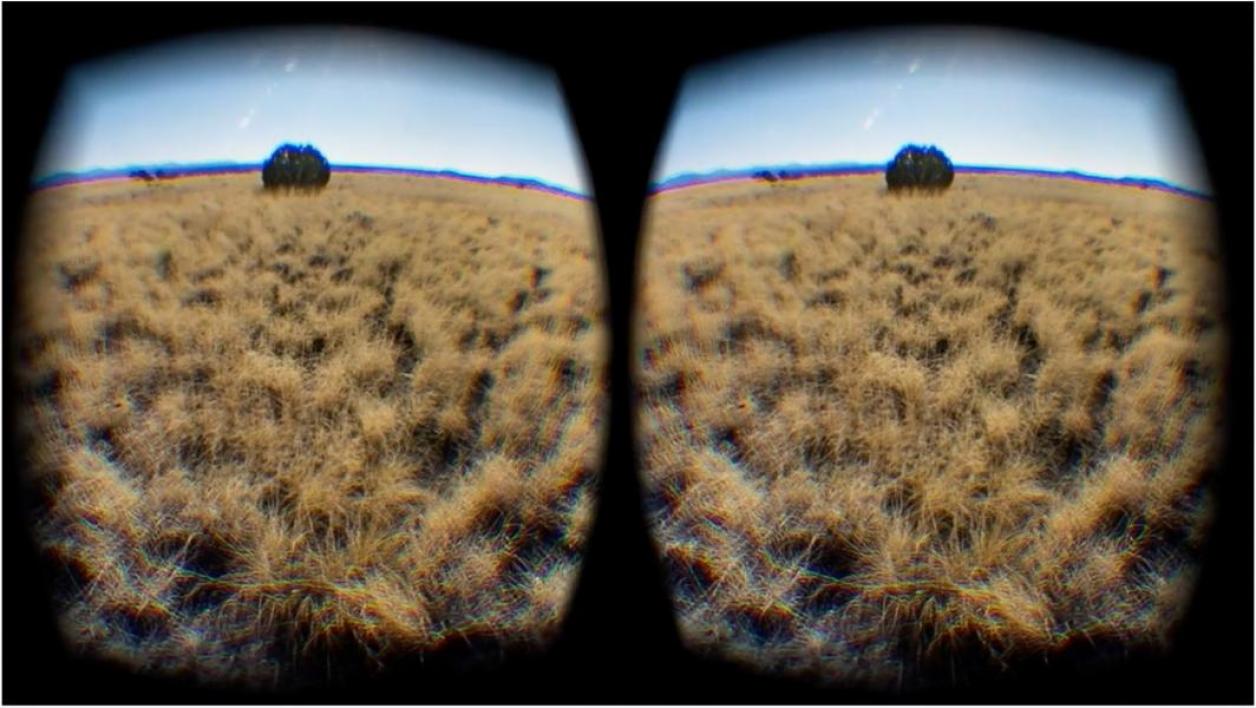 Screen shot of a video demonstrating scenes developed for the Ecorift, an virtual-reality experience focusing on national parks of the southwestern U.S. The sound is recorded in ambisonic format providing a full sphere of audio, and images are taken to form a spherical panorama. These are combines in the Oculus Rift and in other formats to provide a 3-D world that the viewer can explore. 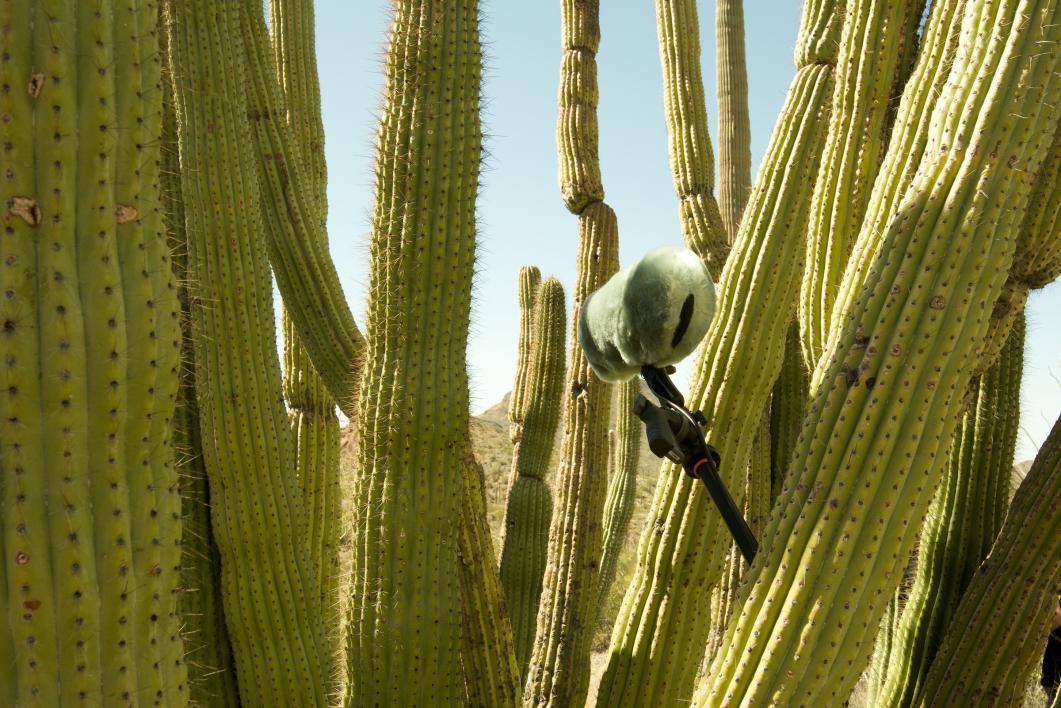 ASU associate professor Garth Paine's audio recorder held inside an organ pipe cactus as one national parks ranger suggested it was an interesting place to listen on a windy day.

But the park service has to tread carefully, according to Christine Vogt, a professor in the School of Community Resources and Development and director of the ASU Center for Sustainable Tourism, who teaches a class about the history of the parks.

“One of the classic examples is feeding the bears

A ranger dances with a bear at Yosemite in the 1920s. Photo by National Park Service at Yosemite. Now it appalls people that the park service even allowed that to happen,” she said.

“But they have to make sure they’re not buying into the latest crazes. Just because Pokémon Go is popular now doesn’t mean every park should be facilitating Pokemon Go.”

A place to step away

The parks were created because leaders in faraway places saw the stunning vistas captured in paintings and photographs. In the future, people might “visit” a park through a virtual-reality experience, Budruk said.

In the 19th century, the spectacular scenery drew the elites — writers and artists from the East, whose paintings and stories helped convince political leaders of the need to preserve the lands. Later, photographs by Ansel Adams and others showed the spectacular beauty of the landscape.

An ASU faculty member is sustaining the legacy of those early photographers. Binh Danh, an assistant professor of photography in the Herberger Institute for Design and the Arts, travels to national parks to create daguerreotype images of the landscape, in which the photos are made on shiny silver plates.

"It's an amazing process. It's really reflective. So it became very poetic at the begining of photography," said Danh, who travels with a portable laboratory in a van and uses a large-format camera.

"With that idea I wanted to see myself in my photograph, and I want other people to see themselves and especially for people of color, for immigrants, to see their own face in this majestic American landscape. So that's why I began photographing the national parks."

Video: The role of photography in the parks, past and present

"Is Instagram really encouraging people to go out and experience it, or is digital media the way we have it today creating an artificial nature where we’re romanticizing this nature and it’s not exactly the same colors or visuals that you’re seeing in a digitized verison?" Budruk said.

"I think digial media has allowed a lot more people to be exposed to the great outdoors and the national parks, but it’s still too new to know what that means."

In looking ahead, Budruk would like the agency to embrace the role of technology in the visitor experience.

“It could be where we download an app and use our phones to learn more about a type of tree. Or maybe someone can’t be on a trail but can be in a theater that surrounds them with that experience,” she said.

“But you can’t deny the fact that there are others who say that the parks are the last place where you can step away from a world that is so full of technology and slow down and explore nature for what it is.”

Who Tweeted That with Sun Devil Soccer

Check out the latest installment of Who Tweeted That featuring the Sun Devil Soccer team, who hosts Loyola Chicago at 7 p.m. Friday night for their home opener. ...

Who Tweeted That with Sun Devil Soccer Check out the latest installment of Who Tweeted That featuring the Sun Devil Soccer team, who hosts Loyola Chicago at 7 p.m. Friday night for their home opener.