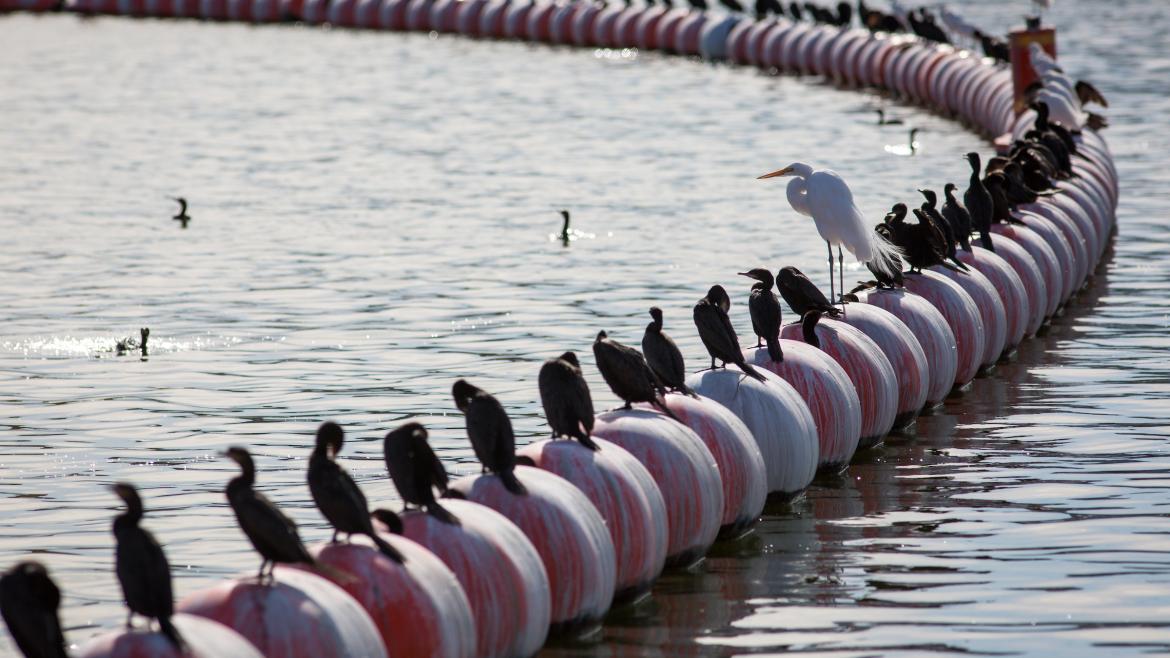 Arizona State University and the Smithsonian Institution have combined to create an interactive computer simulation to show the public how complex it can be to manage water on a state level in the face of drought and climate change.

“WaterSim America is a great platform to educate the broader public on what they can do as individuals and groups to manage water in ways that lead to positive change,” Boone said.

The interactive uses issues and scenarios involving water resources to provide a clearer picture of what the future might hold. It also introduces the public to the complicated budgeting process that provides for current and future water needs.

In the simulation, each state has its own model of water supply and demand running on a web server, which can show the impact of population growth and drought as well as various water management policies. It calls for users to respond to challenges that have shifted supplies and demands out of balance. Users must select policies to steady their state’s water system.

“At the center of everything is the question ‘How do we make better decisions about the future and manage our resources in a sustainable way?’” said Dave WhiteWhite is also a professor in ASU's School of Community Resources and Development in the College of Public Service and Community Solutions., director of the center. “Because water management is such a complex system, there are hundreds of ways it can be managed. There is no single or optimal path to water sustainability.”

WaterSim America is based on a model developed by the center’s Liz Marquez, David Sampson and Ray Quay. Their program can help drought-ravaged cities anticipate a range of possible future conditions and build capacity for sustainable water resource management and climate adaptation. 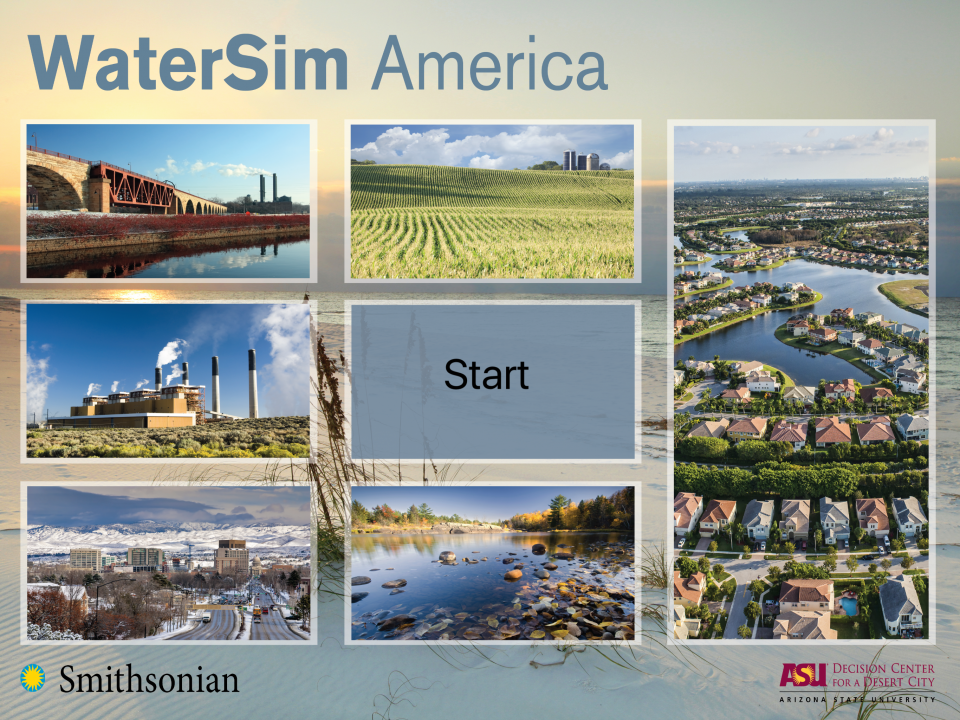 Researchers at ASU's Decision Center for a Desert City modified their popular WaterSim program so that it could explore water issues on a state level. The program is part of a Smithsonian Institution's Museum on Main Street traveling exhibit.

The framework, White said, “provides a way for people to explore this complex system from these different viewpoints and to understand that tradeoffs exist in whatever path we choose.”

The “Water/Ways” exhibition highlights the relationship that people have with water both collectively and individually. It allows users to explore different options and share their input.

The exhibition, including WaterSim America, will travel to Florida, Illinois, Minnesota, Idaho and Wyoming through next year.

Decision Center for a Desert City is a research unit funded by the National Science Foundation and administered by the Julie Ann Wrigley Global Institute of Sustainability at Arizona State University.

Top photo: A flock of birds sit on the floating barrier on a warm Friday, Jan. 22, 2016, on Tempe Town Lake. Photo by Charlie Leight/ASU Now

'A force to be reckoned with'

Editor's Note: This is the first in a two-part series following members of the first ASU Pueblo Indian Doctoral Cohort. The 10-member group — formed to address a glaring underrepresentation of Native American doctorates — graduated a year ago, and in the time since they’ve expanded leadership programs, women’s rights work and political efforts. ASU Now visited New Mexico to get a close-up ... 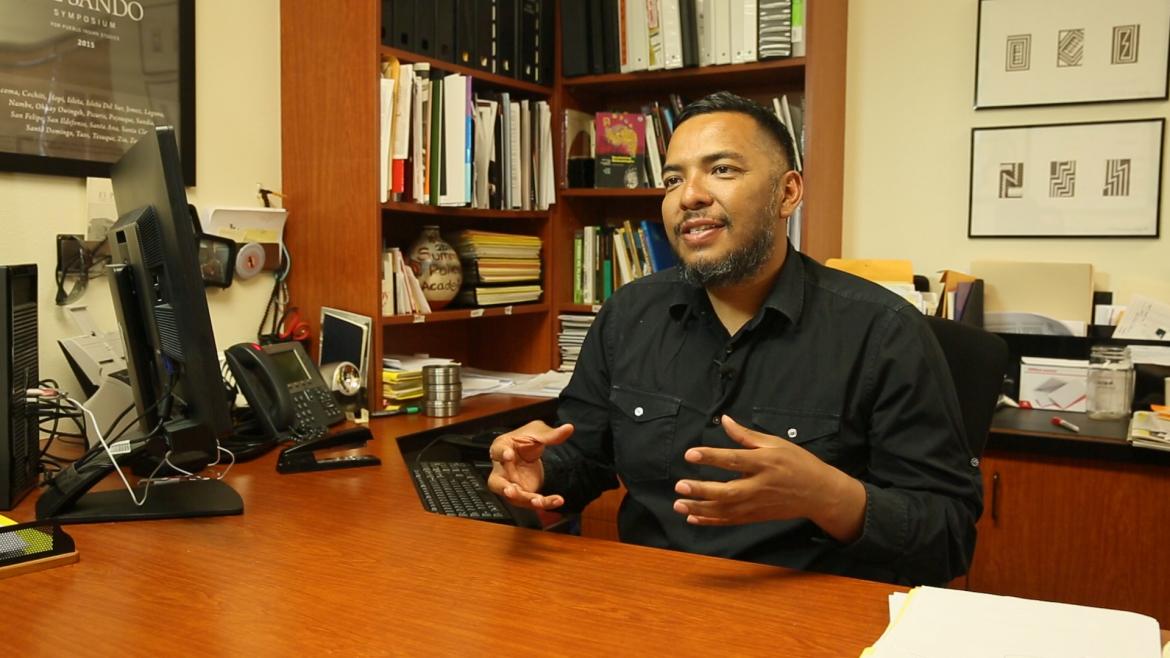 'A force to be reckoned with'

Grads of ASU's Pueblo Indian Doctoral Cohort are changing their communities.
A year after earning his PhD, Carnell Chosa still not used to being called "Dr."
Co-founder of doctoral program a "force to be reckoned with" in Indian education
August 23, 2016

Carnell Chosa, a co-founder and graduate of the ASU Pueblo Indian Doctoral Program, is training leaders in his community

Editor's Note: This is the first in a two-part series following members of the first ASU Pueblo Indian Doctoral Cohort. The 10-member group — formed to address a glaring underrepresentation of Native American doctorates — graduated a year ago, and in the time since they’ve expanded leadership programs, women’s rights work and political efforts. ASU Now visited New Mexico to get a close-up view of their progress. The second story is available to read here.

Carnell Chosa has had his doctorate for more than a year, but he says he’s still not used to anyone calling him “Dr.”

For years, Chosa has operated a leadership program for Native Americans out of an otherwise empty wing of a Santa Fe, New Mexico, high school. His austere, isolated office underscores his quiet, humble nature, but it belies the booming impact of his efforts that now include helping establish the doctoral program that earned him his title: Dr. Chosa.

“Carnell Chosa is a force to be reckoned with,” said Bryan McKinley Jones Brayboy, Arizona State University’s special adviser on American Indian Affairs. Chosa has “a tremendous vision for his work that is focused on communities driving toward their own futures.”

Such goals prompted Brayboy to partner with Chosa’s Leadership Institute at the Santa Fe Indian School to select the inaugural class of the ASU Pueblo Indian Doctoral Program. Brayboy also tapped Chosa to join that first cohort, a 10-member group assembled in 2012 to address a severe underrepresentation of Native American doctorates and doctoral candidates.

Only 1 of every 7,000 American Indian and Alaska Natives who attends high school goes on to obtain a doctorate, Brayboy said. “The number itself surprised me,” he said. “I felt like ASU was best situated to address this and to be able to build and strengthen local capacity in tribal communities.”

According to the National Science Foundation’s 2014 Survey of Earned Doctorates, whites represent 73 percent of all doctorates earned in the last two decades followed by Latinos with 6.5 percent; blacks with 6.4 percent. Native Americans, meanwhile, accounted for 0.3 percent.

When cohort members graduated, they represented about 20 percent of all doctorates earned by Native scholars in 2015, and the program promises to grow. A second Pueblo cohort launched last fall, and a Navajo doctoral program launched this year. Tribes from around the nation, meanwhile, are reaching out to see if they can be included, Brayboy said.

In the year since the first Pueblo cohort graduated, members have returned to their communities and expanded leadership programs, women’s rights work and political efforts.

The program’s roots go back to 2011 when Chosa went looking for an indigenous justice program — focused on the social, legal, economic and human rights inequities within the Native communities. He checked with several universities, but came up empty. Eventually, he reached out to Elizabeth Sumida Huaman at ASU’s School of Social Transformation, which didn’t have such a program at the time, but agreed to co-create one if they could find qualified candidates and funding. 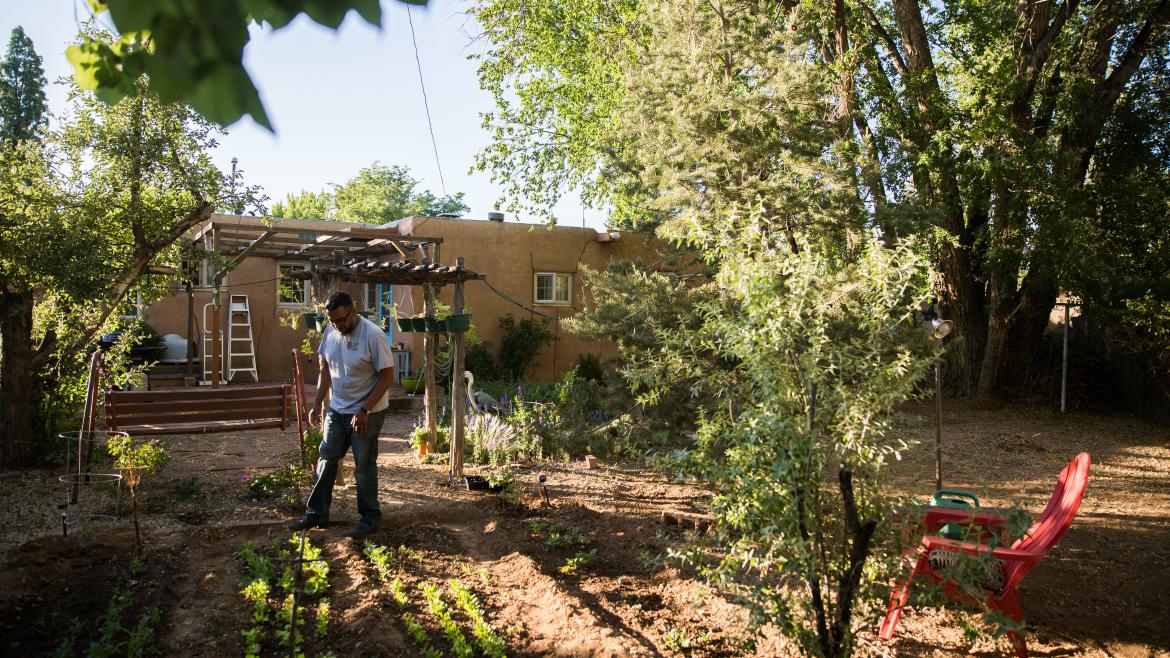 Chosa spends time
in the garden of his
Santa Fe home, where
he grows squash, chilis
and corn. He was too
busy to keep a garden
when he was working
toward his doctorate.

Brayboy, a President’s Professor and director of ASU’s Center of Indian Education, along with Sumida Huaman, an assistant professor of indigenous education, justice and social inquiry in ASU’s School of Social Transformation, connected with the Santa Fe-based institute to identify potential applicants and turned out an inaugural class with deep backgrounds — as teachers, advocates, lawyers and health care professionals — working on social issues facing New Mexico pueblos.

About a year later, the program launched with financial support from the W.K. Kellogg Foundation, which provided the Leadership Institute more than $600,000 to cover tuition, fees, books and travel. ASU, meanwhile, offered scholarships to cover tuition for two students.

ASU professors flew to New Mexico to teach the courses. The scholars, meanwhile, occasionally visited Tempe, Arizona, and also traveled to study with other indigenous doctoral students around the world, including the Sami in Norway and the Maori in New Zealand.

Cohort members said it was a brutally busy period.

“There were times when we all wanted to quit because it was so intense,” said Michele Suina, a cohort member from the Cochiti Pueblo. “I remember more than a few late night phone calls with Carnell, who was able to talk me into staying. We all drew on each other in those three years.”

Chosa said he considered dropping the program, but he didn’t want to let down himself or others.

“Completing the doctorate meant I could help influence or shape the dreams of the future of a child in our community,” he said. “My community helped shape me, and now I’m in the position to do the same for someone else.”

The 44-year-old Chosa was raised on the Jemez Pueblo, a closed reservation surrounded by mountains about 55 miles northwest of Albuquerque. He was raised by his mother and his grandparents, but he said his support network was much larger.

“In our pueblos you don’t have one parent, you have 10,” Chosa said. “You have aunts and uncles, cousins and a community of adult neighbors that can nurture and discipline you and take on a parental role to make sure you grow up the right way.”

He said his mother, Martha, an Army veteran, returned to Jemez, a farming community of about 3,800 people, to raise him so that he would learn to speak Towa.

“There’s something very special about speaking a language that only very few people in the world know,” Chosa said. “It connects us as a people, which has kept us together for a long time.”

That connection helped draw Chosa back home after he went to New England for college. He received his undergraduate degree at Dartmouth in 1994 and his master’s at Harvard two years later. 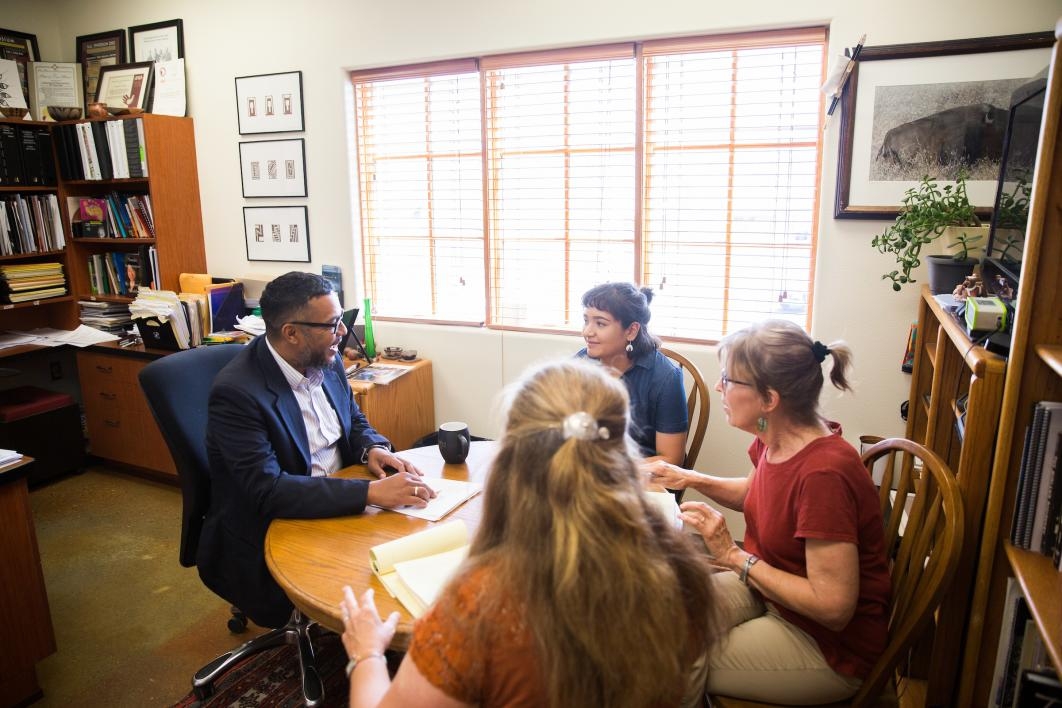 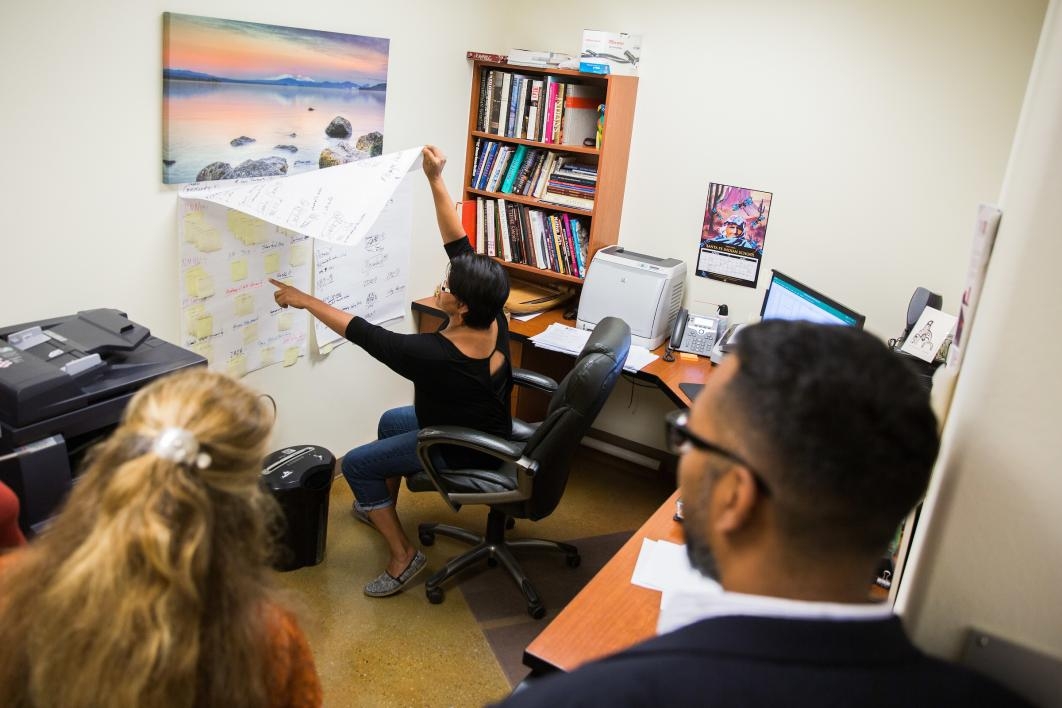 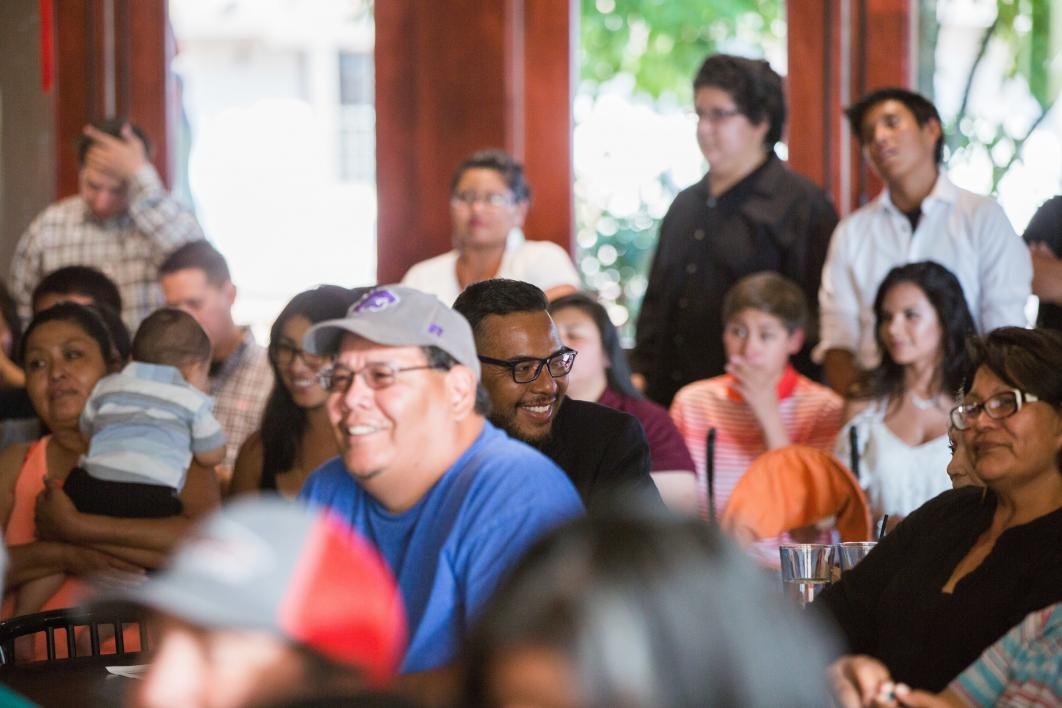 Carnell Chosa, center, with family and friends of students from the Summer Policy Institute as they read their poetry during their Creative Writing Performance at the Santa Fe Museum Hill Cafe.

He returned to New Mexico and established the Leadership Institute, alongside co-founder Regis Pecos, which he has run ever since.

Today, the institute runs 17 programs focused on leadership, community service, public policy and critical thinking. Its cornerstone is the Summer Policy Academy, a four-week summer mentorship for high school students that focuses on indigenous issues at the tribal, state, national and international levels.

This year, that signature academy celebrated its 10th year. It’s graduated nearly 250 students, all of whom created and implemented community service projects and developed youth policy position papers on issues of their choosing.

Albuquerque attorney Aaron Sims attended the inaugural Summer Policy Academy in 2006 on behalf of the Acoma Pueblo. He said it changed his life. “At the end of the program,” Sims said, “you have to answer, ‘What will your contribution be to your community? And how will you help keep them going?’”

Sims said Chosa has remained a valuable friend and mentor. “He takes enormous pride in seeing others succeed.”

For Brayboy, the success isn’t surprising. Chosa “is innovative, deeply engaged in his communities — and the communities surrounding him — and is one of the best people I know. He is a gift.”