A whirlwind week in France was part of Imane Lamrani’s summer — seven fast-paced days that left her a bit fatigued but energized more than ever to succeed at the research she’s doing to earn her doctoral degree in computer engineering.

The experience “was way beyond what I expected,” Lamrani says of her time with fellow doctoral students from universities in France and the United States. 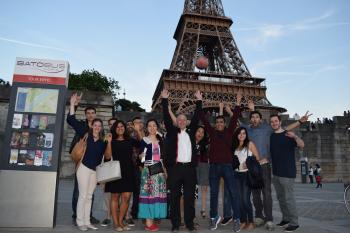 Arizona State University doctoral student Imane Lamrani (third from right) poses near the base of the Eiffel Tower with peers from universities in France and the United States during a recent trip to Paris as part of an international doctoral student research exchange program. Photo courtesy of Imane Lamrani. Download Full Image

From among 120 applicants, she was one of only 10 American computer science and computer engineering doctoral students chosen for this summer’s session of the French-American Doctoral Exchange Program organized by the Office for Science and Technology of the French Embassy in the United States.

The theme was cyberphysical systems and their applications, one of the major thrusts of Lamrani’s doctoral program research pursuits in Arizona State University's Ira A. Fulton Schools of Engineering.

“I was amazed by the quality of the work being done,” she said of the presentations by fellow students, and by engineers and scientists at major laboratories and research centers in Paris, Grenoble and Rennes.

Lamrani also got helpful insights from feedback she received on her own research presentations.

“I am going to apply all of what I learned there to enhance the quality of my research,” she said.

She and the other students from American universities also learned about internships and postdoctoral positions available at some of France’s laboratories, as well as opportunities to collaborate with French researchers.

The French and American students are staying in touch and exploring possibilities to team up on research efforts.

“We have a group platform where we talk, share pictures and ideas,” she said, “and we are discussing some ideas for collaborations.”

For now, Lamrani is conducting her research in the iMPACT Lab (short for intelligent, mobile, pervasive, autonomous, computing and communication technologies), which is directed by her doctoral studies supervisor, Professor Sandeep Gupta, interim director of the School of Computing, Informatics, and Decision Systems Engineering.

She says she chose to seek her doctoral degree at ASU because of the Fulton Schools comparatively high rankings in computer science and engineering, and the quality of the laboratories.

Family also factored into her decision. One of her sisters, Soukaina, is studying for a master’s degree in global management in ASU’s Thunderbird School of Global Management.

Lamrani hopes to eventually become a university professor and return to Morocco to bring the benefits of what she is learning from American education and culture to her country.

In particular, she wants to broaden awareness of America’s advanced research methods and systems among leaders of Morocco’s science and engineering communities.

One of her messages will undoubtedly be about the benefits of cultural exchange and collaboration with researchers in other countries.

“It’s something I highly recommend, especially to students,” Lamrani says. “They will definitely learn things of great value that will help their careers. It’s been an enlightening experience for me.”

Before four years of serious study, the Class of 2020 kicked off their Arizona State University experience with a maroon and gold explosion of yells, chants, drums, horns, glow sticks and forked fingers.Bands, streamers, dancers and speakers amped up the traditional Sun Devil Welcome on Tuesday at Wells Fargo Arena in Tempe, echoed back by the roar of about 11,500 freshmen, the largest incoming cl... Before four years of serious study, the Class of 2020 kicked off their Arizona State University experience with a maroon and gold explosion of yells, chants, drums, horns, glow sticks and forked fingers.

Bands, streamers, dancers and speakers amped up the traditional Sun Devil Welcome on Tuesday at Wells Fargo Arena in Tempe, echoed back by the roar of about 11,500 freshmen, the largest incoming class in ASU history.

Properly flashing a pitchfork, learning to jingle keys at kickoff and singing the fight song were all part of an hourlong Sun Devil boot camp.

“Being a Sun Devil means cheering your heart out when someone scores a touchdown...” said Ryan O’Hara, Polytechnic campus student government president. “Study hard. Sit in the front row. Get to know your professor outside of class. 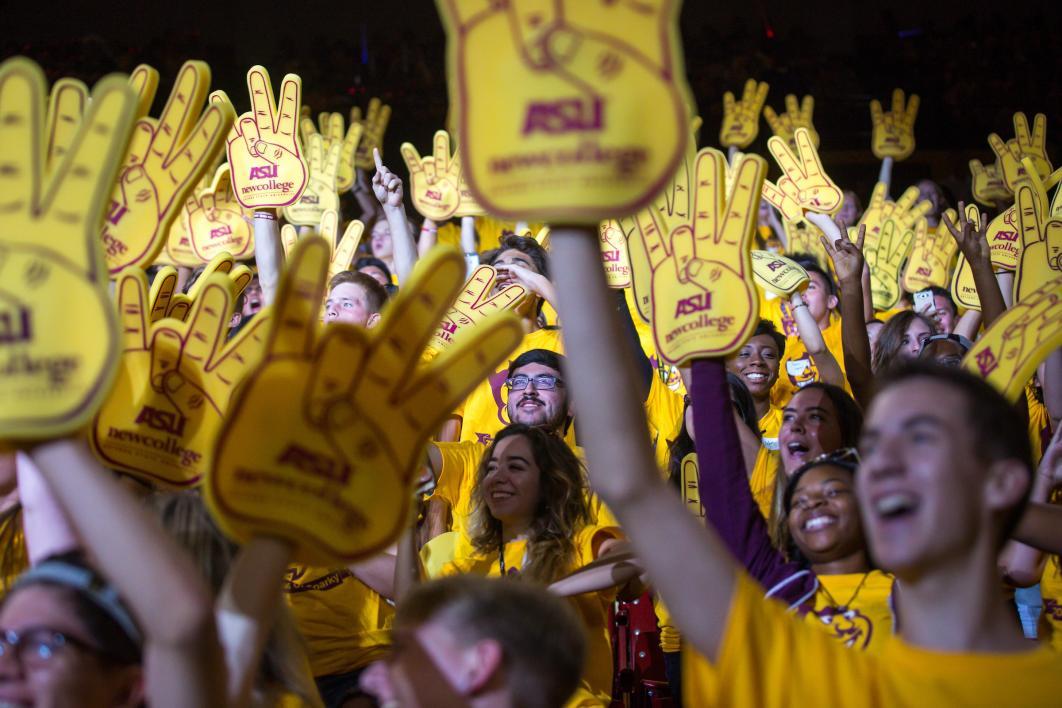 The West campus' New College students show their excitement at the Sun Devil Welcome at Wells Fargo Arena on Tuesday eveing. Members of the Class of 2020 caught the Sun Devil spirit, practiced the school's fight song and heard about the purpose of ASU from President Michael Crow. 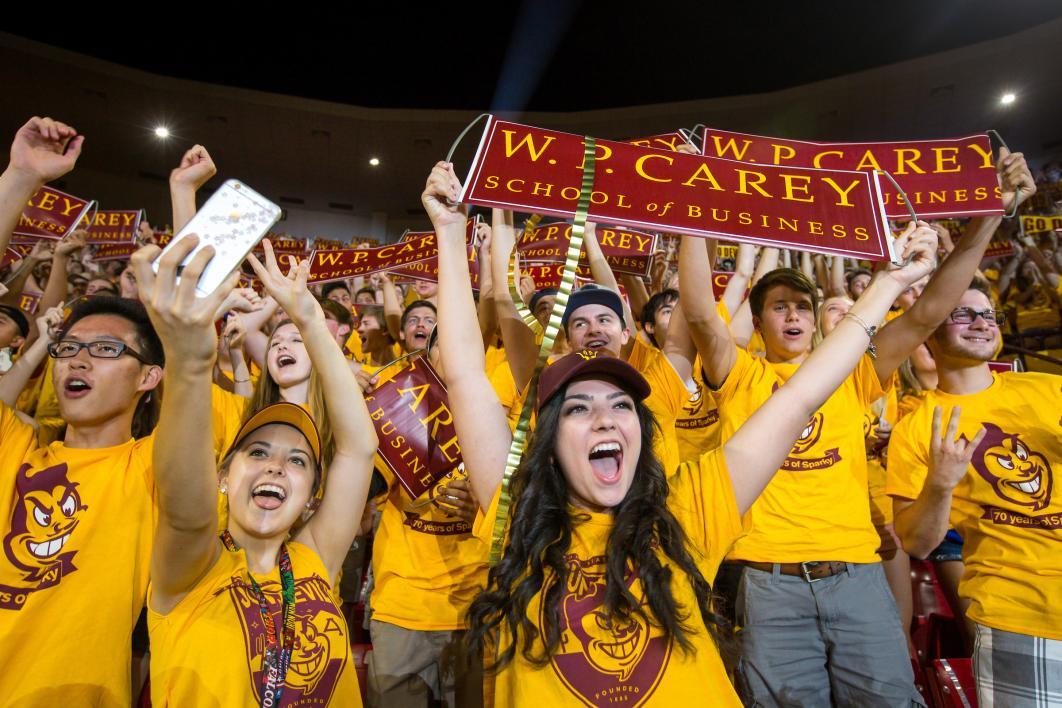 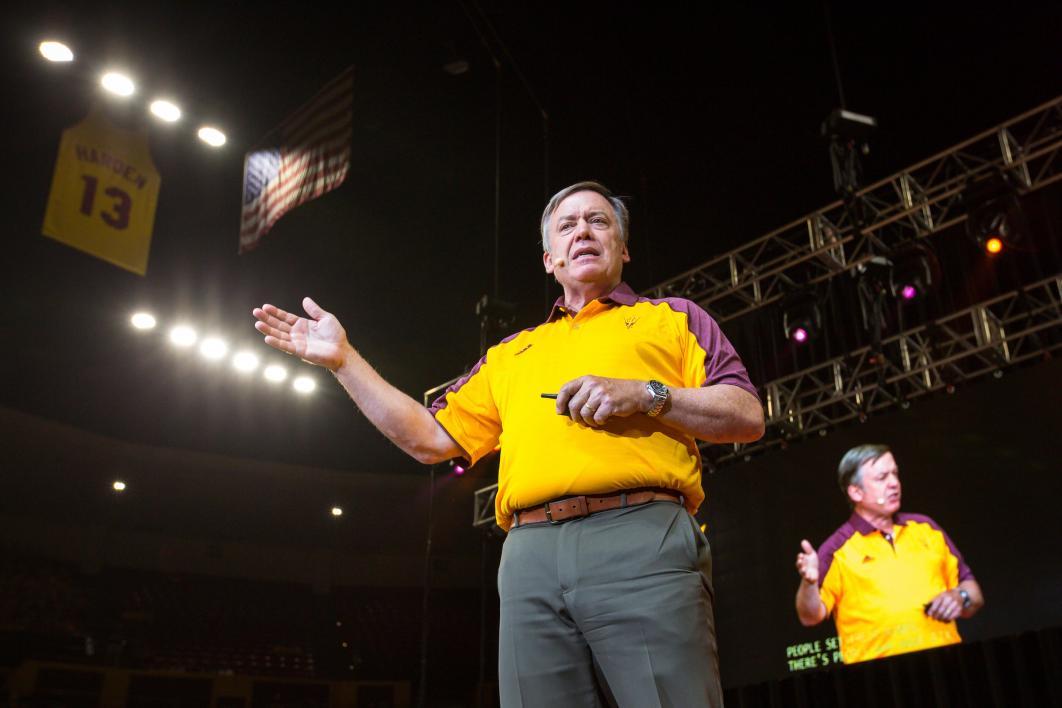 President Michael Crow explains the university's purpose at the Sun Devil Welcome at Wells Fargo Arena on Tuesday, saying the goal was to create a place where students learn how to learn. 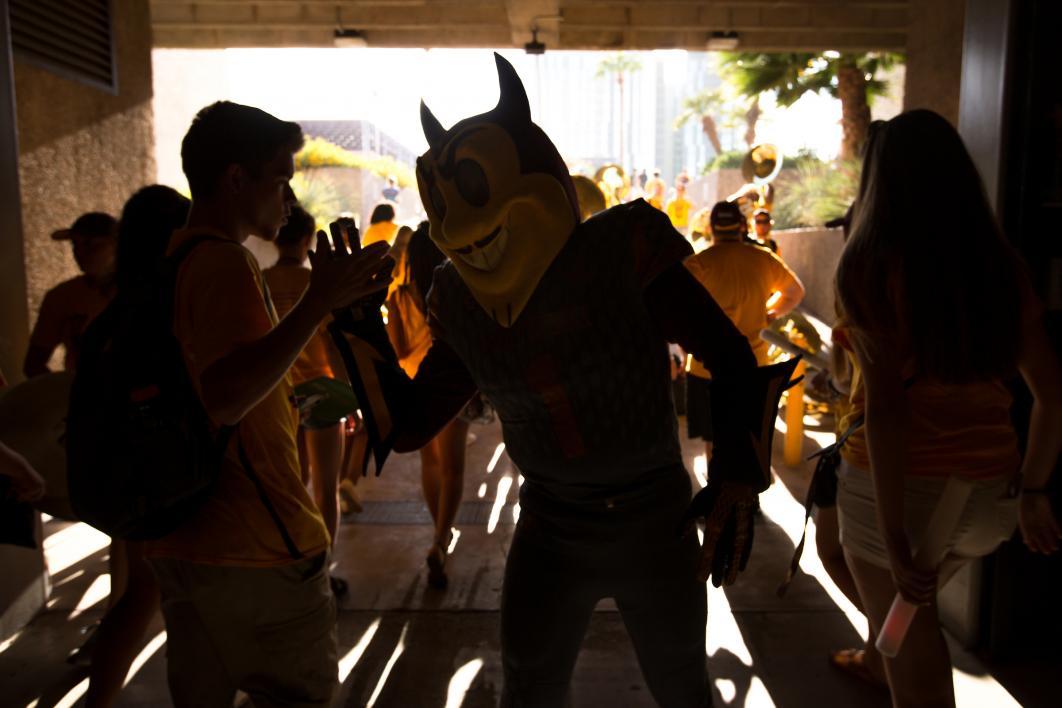 Sparky welcomes first-year students after the Sun Devil Welcome on Tuesday in Tempe.

University President Michael Crow welcomed the freshmen, who hail from 74 countries and all 50 states.

“You are special Millennials,” Crow said. “You are Millennials.net, which means you have never lived without the internet.”

Crow said the university’s intent is to create a place where students learn how to learn. They will face a world more complex than ever faced by anyone before them, he said.

A video of a Godzilla-size Sparky stomping across the Valley to the thundering bass of AC/DC drew huge cheers, especially when he crushed a bus with the University of Arizona logo on the roof before entering his namesake stadium and impaling the turf with a flaming pitchfork.

Ray Anderson, vice president of university athletics, said the 24 varsity teams need all the support they can get.

“I want you to understand how vital you are on game day,” Anderson said. “Bring the heat when you get out there.”

Jim Hudson, ASU director of athletic bands, introduced Sparky in the flesh with a rousing band performance heavy on the bass.

“We have the best mascot in the country,” Hudson declared. “Who would want to be a duck?”

“On Fridays we wear gold,” Hudson said. “We need you in the house to make it our house.”

And, in a sea of gold T-shirts, they walked out of the arena and into four of the most important years of their lives.

“I liked it,” said Erika Nanney, who is majoring in digital culture. “I liked the energy.”

Future engineers from the Ira A. Fulton Schools of Engineering show their spirit at the Sun Devil Welcome at Wells Fargo Arena on Tuesday evening. Members of the Class of 2020 caught the Sun Devil spirit, practiced the school's fight song and heard about the purpose of ASU from President Michael Crow. Photo by Charlie Leight/ASU Now