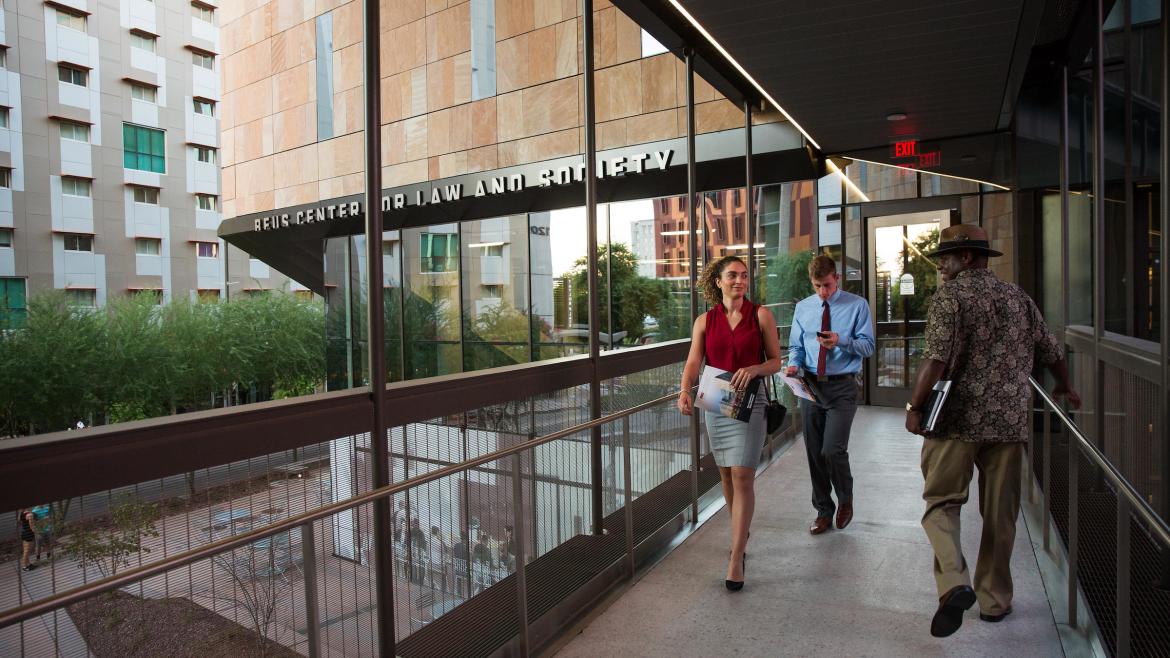 Center for Law and Society stands for inclusion

Leaders from courtrooms and capitols joined Arizona State University President Michael M. Crow on Monday evening to christen the Beus Center for Law and Society, a nearly $130 million building in downtown Phoenix that Crow said would stand as a monument to inclusion and accessibility.

The grand opening highlighted how the building that Crow called a “world-class facility in a world-class location” would serve as more than home to ASU's Sandra Day O’Connor College of Law, whose namesake, a retired U.S. Supreme Court Justice, joined the ceremony. Crow and other speakers emphasized the center’s aim of connecting the community, as much as students, to the law and justice. The center will house the nation’s first teaching law firm, a law library open to the public and a legal triage service to help the public find legal support.

The center was named for attorney Leo Beus and his wife, Annette, who contributed $10 million to help build it — the largest donation in the law school’s history. The 2014 gift brought the Beus’ ASU Law donation total to $15 million.

“This university is transforming education across the country,” Leo Beus said. “We were such a blessed community to have this here.”

Classes begin Wednesday at the six-story, 280,000-square-foot center in the legal, political and economic heart of Arizona. The dedication caps a massive relocation that began a decade ago. ASU Law’s new home includes a state-of-the-art courtroom.

Aside from the law school, the building will be home to organizations including: the Arizona Legal Center, The McCain Institute for International Leadership, Arizona Voice for Crime Victims, the Arizona Justice Project, the Lincoln Center for Applied Ethics and the Sandra Day O’Connor Institute.

The Ross-Blakley Law Library also transitioned to Phoenix in the move. It had been located in a separate building near the law school in Tempe. The library will occupy multiple floors and will include 100,000 tangible volumes of legal research and 125,000 electronic titles.

The Beus Center for Law and Society also will include space for two think tanks.

Stanton said the city’s economic success was closely tied to the creation and growth of ASU’s Downtown Phoenix campus over the past decade and called the city’s land and financial contributions “one of the best investments the city, the people and taxpayers have ever made.”

The Downtown Phoenix campus boasts 13,000 students, about 900 of whom attend ASU Law.

Douglas Sylvester, the school’s dean, said the college has already seen 30 percent more applications since last year. He called the new facility “unquestionably the most optimistic and ambitious school in the country and in the world.”

Arizona State University’s law school dean was candid about the transition into his $129 million new digs.“There is no easy move,” said Doug Sylvester, head of the Sandra Day O’Connor College of Law, checking off the complications of going from a squat, tan building in Tempe to a sparkling state-of-the-art facility in downtown Phoenix. “There were a lot of hiccups. No power. Some of the ... 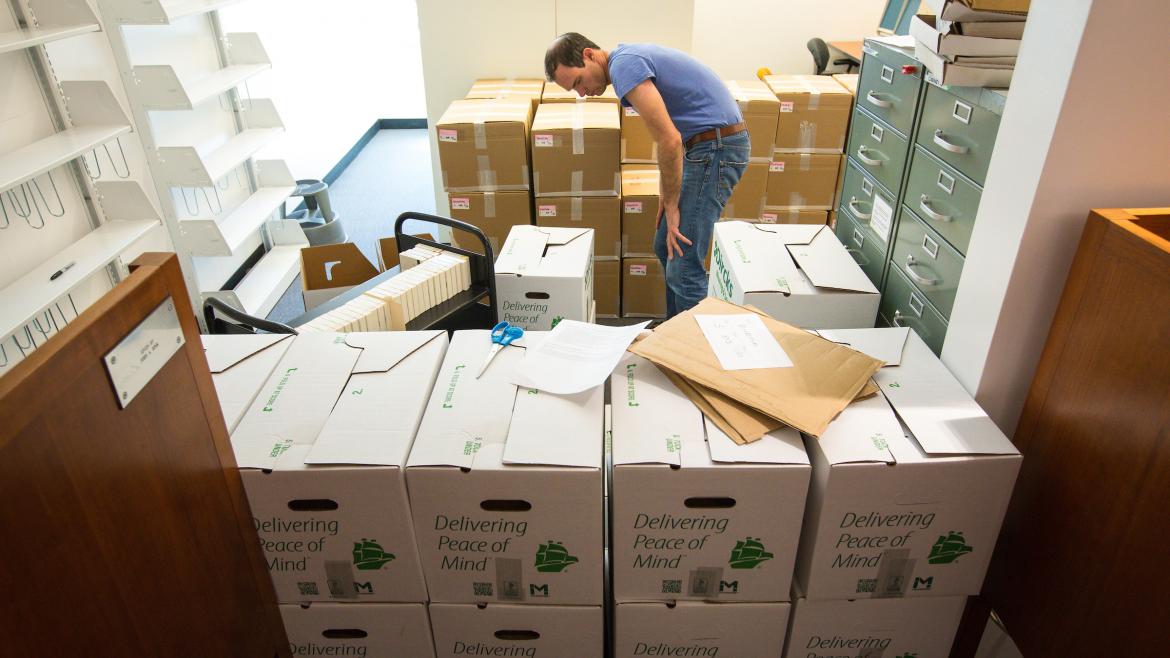 Arizona State University’s law school dean was candid about the transition into his $129 million new digs.

“There is no easy move,” said Doug Sylvester, head of the Sandra Day O’Connor College of Law, checking off the complications of going from a squat, tan building in Tempe to a sparkling state-of-the-art facility in downtown Phoenix. “There were a lot of hiccups. No power. Some of the computer systems weren’t running. And issues with lighting, heating and cooling.”

But it’s almost over, he said.

On Aug. 15, ASU Law plans to celebrate the grand opening of its new home at the Arizona Center for Law and Society, capping a decade-long relocation project aimed at making the school more accessible to top lawyers, government officials and everyday people.

“The goal is to create a single point where students, educators, political leaders, the legal community and the public can interact and connect,” Sylvester said. “That is different than any other law school in the country.”

A few stragglers remain at Armstrong Hall, ASU Law’s home since its inception in 1967. The overwhelming majority of the college’s faculty and staff, meanwhile, are already settling into their new 280,000-square-foot, six-story space, which is “still a bit of a mess,” Sylvester said, as crews finish their work.

It’s been a bustling scene recently. As Sylvester spoke, a worker jackhammered a sidewalk, a loading dock filled with shipments and movers hauled furniture and equipment past “pardon my dust” signs.

In a few weeks, ASU Law, one of 12 occupants inside the Center for Law and Society building, will be home to 900 students. The group will be closer to the state Capitol and legal district, providing them with better access to internships and professional opportunities, Sylvester said.

“If you put up doors and guards and security, members of the general community are not going to come in because they feel unwelcome the minute they arrive,” Sylvester said. “It was more expensive to build this way, but we felt that was necessary and think it is part of our mission.”

The move has been a priority for ASU President Michael Crow since at least 2003 when he and Phoenix’s mayor at the time, Phil Gordon, met for breakfast and sketched — on a plain, white napkin — a downtown campus that could enhance the creativity in the city’s core.

The sketch became a blueprint for ASU’s vision of the urban college experience: a campus geared toward city-minded students drawn to professional development and service-oriented careers in government, media, nonprofit, medical and legal work.

Phoenix voters approved a $223 million bond plan about three years after Crow and Gordon’s meeting to pay for ASU’s Downtown Phoenix campus, which includes several colleges serving about 12,000 students. The measure passed easily with two-thirds of the vote. What wasn’t so easy was finding available land for the building that would become home to ASU Law.

In 2010, a vacant motel came up for sale and the city of Phoenix purchased it for $5 million, using the last of the bond funds. ASU and city officials celebrated, but a contingent of preservationists pushed back.

The former Sahara Motor Inn, built in 1955, had been a mid-century marvel with period-style materials that included red brick, mosaic tiles and floor-to-ceiling glass. Marilyn Monroe stayed in one of the inn’s two penthouses during the filming of “Bus Stop.” But the sentimental push, led by the Downtown Voices Coalition, fell short for a building that had most recently been a pink-stucco Ramada Inn.

Work started in 2014 after the city provided the land and an additional $12 million to start construction.

Some say it was none too soon.

“We were bursting at the seams,” facilities manager Allan B. Crouch said. “We actually had to put file cabinets out in the hallways because of the school’s growth.”

Armstrong Hall, ASU Law’s home on the Tempe campus, went through two major renovations and an expansion over its five-decade history, but still had an array of problems that included a leaky roof and faulty plumbing.

Also, there were stacks of legal and research papers at every turn.

In addition to the hallway file cabinets, professor Zachary Kramer joked that one of his colleagues had “piles of papers larger than the size of me.” The move downtown required workers such as library assistant Andrew Story to pack up or purge volumes of material from the Ross-Blakley Law Library. Story helps clear out of Tempe on Monday, June 13. 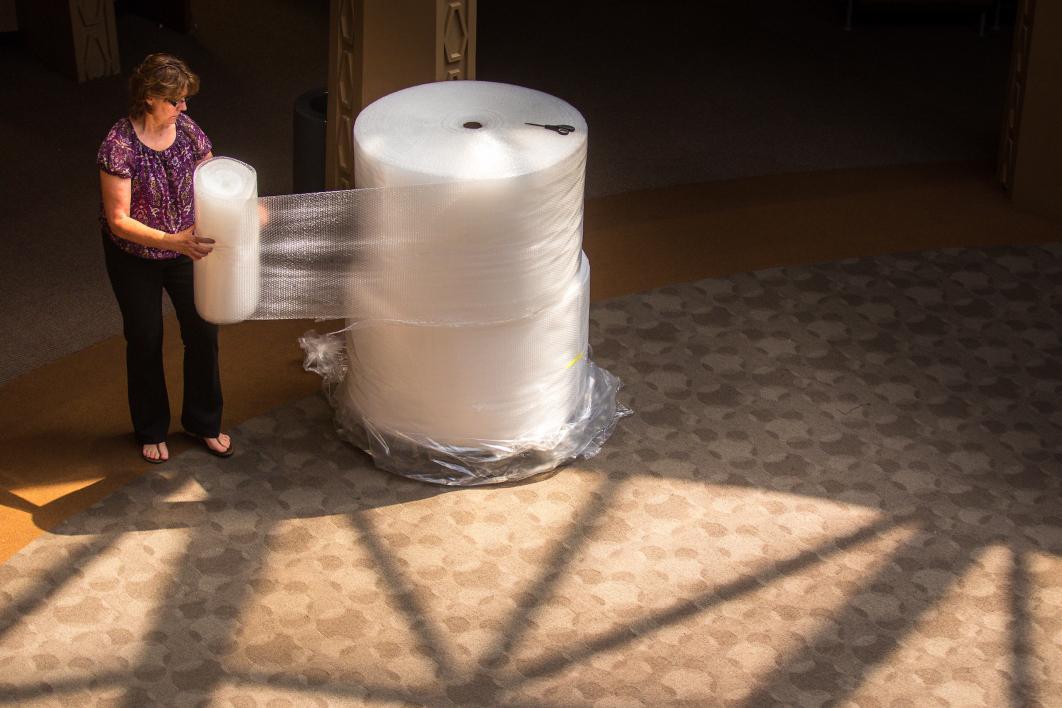 A move wouldn't be a move without bubble wrap. Debb Relph, the program coordinator for the Center for Law, Science and Innovation, helps professors and other staff members pack their offices Wednesday, June 22, in Armstrong Hall on the Tempe campus. 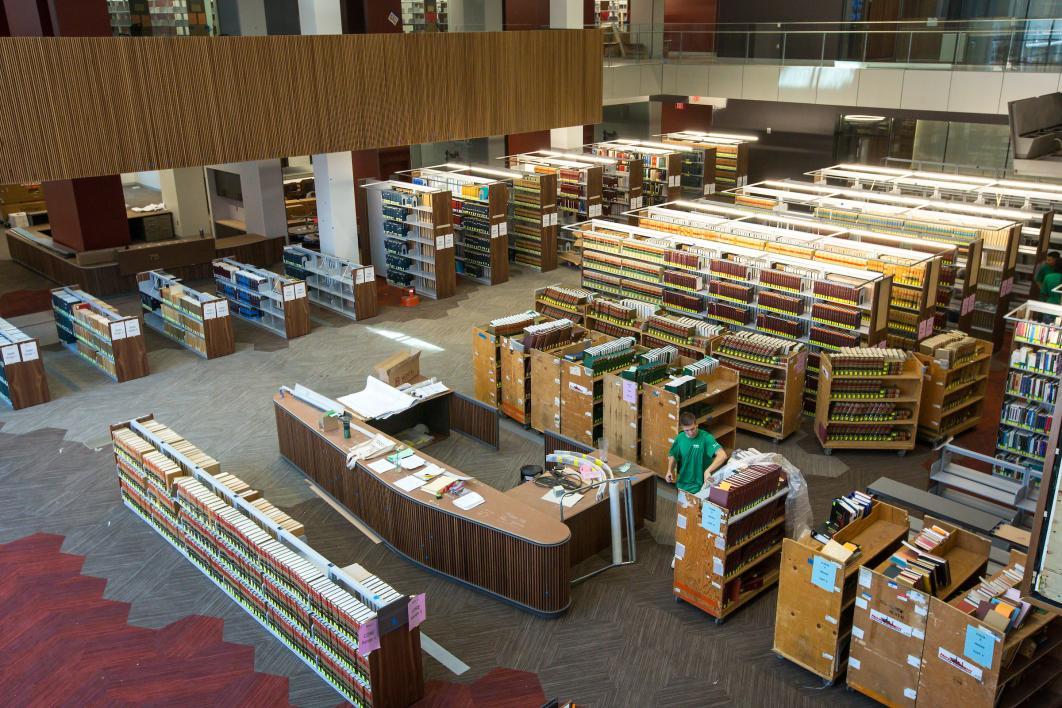 Stephen Fought, with Dircks Moving & Logistics, removes the shrink wrap from a cart with legal volumes to be shelved in the stacks in the new Ross-Blakley Law Library on Monday, June 20. The books are being shelved in the third-floor core collection. Other collections will be housed in the building's fourth through sixth floors. 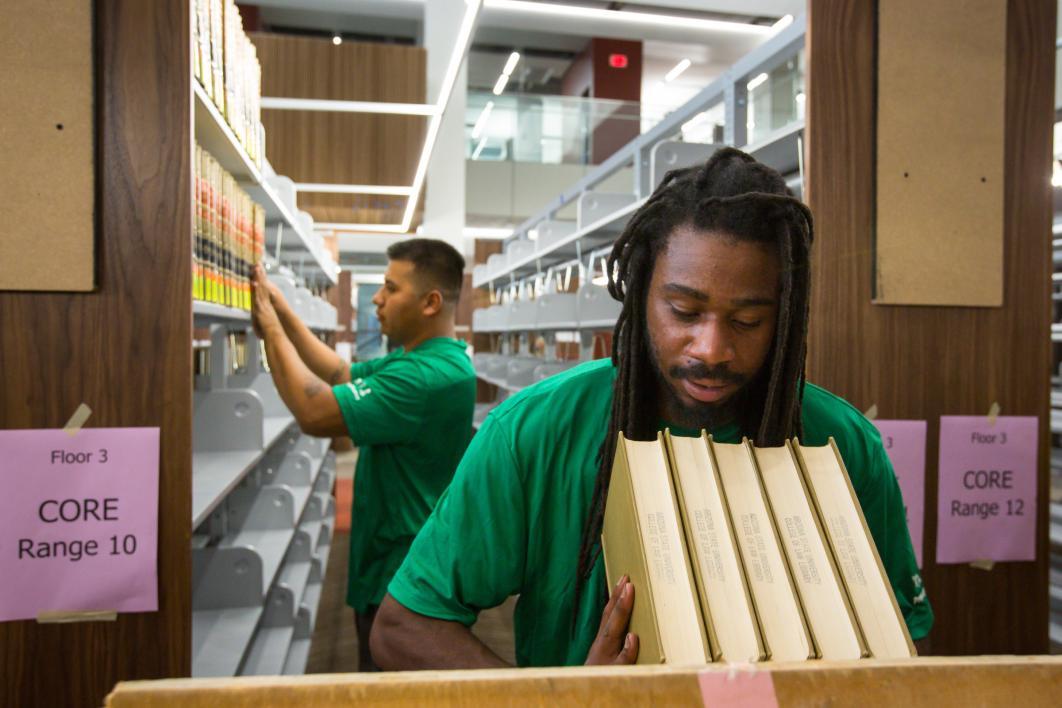 The Ross-Blakely Law Library will be a lot leaner after purging 240 tons of material. Bobby Hooker, with Dircks Moving & Logistics, helps stack what's left in the new library on ASU's Downtown Phoenix campus on Monday, June 20. He works with Saul Ramirez, in the background. 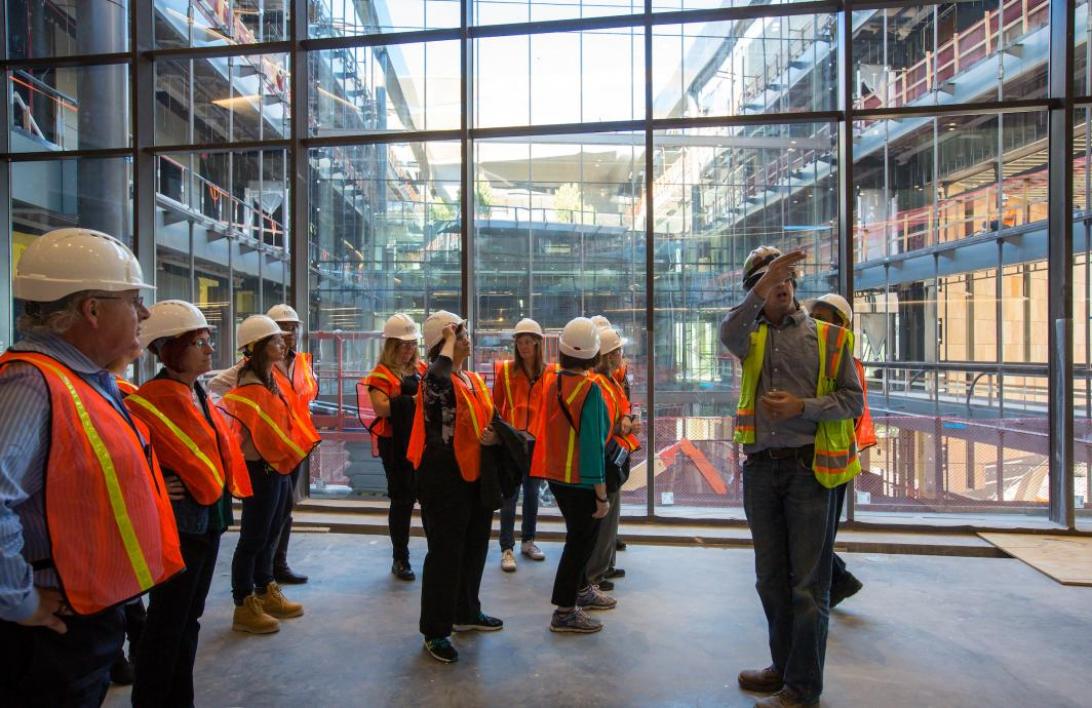 DPR Construction project manager Lew Laws shows the natural light that flows into the new Ross-Blakley Law Library in the new Arizona Center for Law and Society building during a tour on March 23. 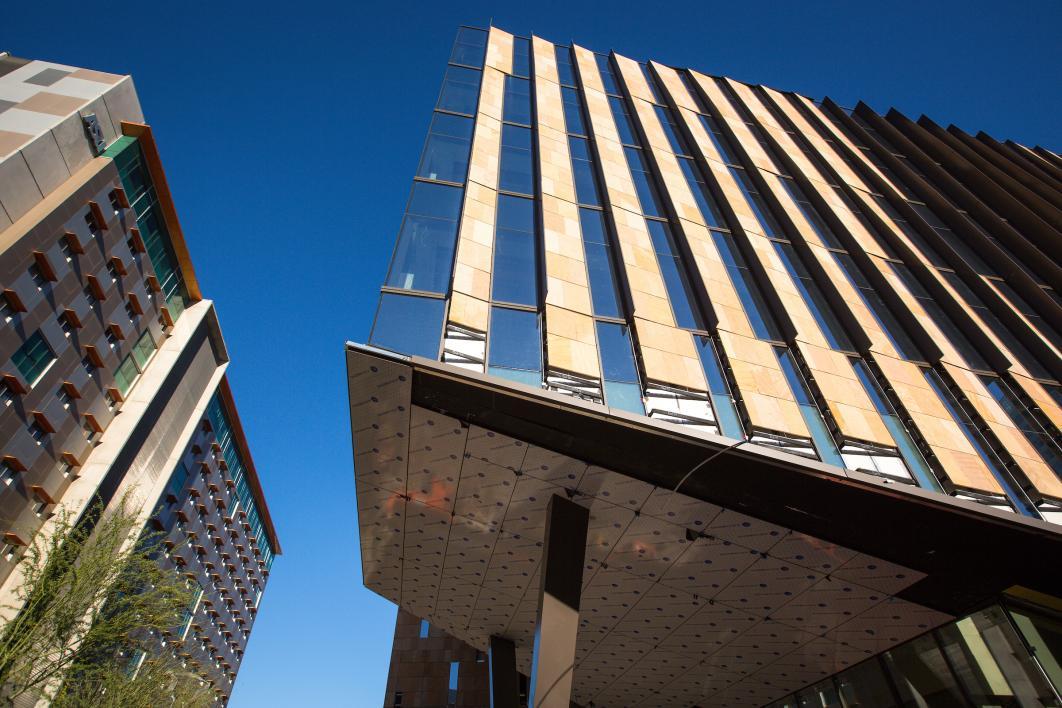 The new Arizona Center for Law and Society is located across the street from the Taylor Place residence hall on the Downtown Phoenix campus.

That won’t be an issue downtown. Law school faculty and staff, including the Ross-Blakely Law Library, were told to go digital by purging most of their books and papers before the move.

Victoria Trotta, the law library’s assistant dean, was put in charge of shedding nearly 240 tons of material. That much paper, laid end to end, would stretch between New York and Los Angeles more than three times.

The process took five years and contractors had to install a special trash chute to accommodate the work, Trotta said. Most of the books were recycled or sent to other institutions, she said.

The new building reflects the growth of ASU Law, which bucks a national trend, Sylvester said. Law schools across the U.S. have cut staff amid declining enrollments over the last five years, he said.

Not so at ASU. Aside from increases in students and staff, the law school has also secured a top 25 ranking from U.S. News and World Report and has been recognized as the top school in the state for graduates successfully passing the bar exam.

Sylvester is looking to build on that momentum in the Arizona Center for Law and Society, which also has spaces for think tanks, several legal aid clinics, a first teaching law firm and a permanent office for retired U.S. Supreme Court Justice Sandra Day O’Connor.

“It’s a place where if you think you need a lawyer, we can help you find one or refer you to a firm,” Sylvester said. “That feature is really unique among any law school in the country and advances the ASU mission across the board.”

As with any exciting move, some are experiencing bittersweet feelings as well.

Dawn Lee, director of the law school’s career services division, attended ASU’s law school more than 20 years ago and feels an attachment to the Tempe building.

But, “I’m really excited about the move. It’ll be an amazing experience for all of us to be in that environment.”

Top photo: Volumes of microfilm are among the items that had to be moved in order for ASU Law to transition into its new home in downtown Phoenix. Library assistant Andrew Story helps pack up in Tempe on on Monday, June 13. Photo by Charlie Leight/ASU Now