“This enriching journey has given me the confidence to think big and not limit any opportunities,” said Aaron Bia, a global health major who graduated in May. “Overall, anything is possible with enough determination and humility.” 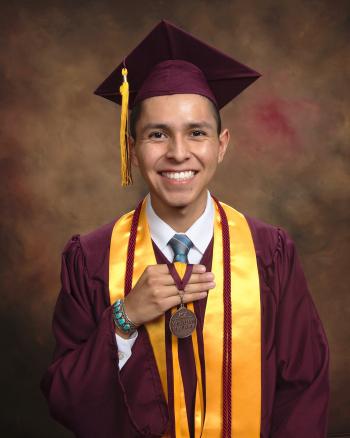 Aaron Bia, a global health major who graduated in May, was awarded the Jean Chaudhuri Memorial Scholarship for succeeding in the world outside his culture. Download Full Image

Every year, the College of Liberal Arts and Sciences honors students who have exhibited achievement, leadership and persistence to overcome obstacles while earning their undergraduate degrees. The annual selection for 2015-2016 awarded Bia the Jean Chaudhuri Memorial Scholarship, Grecia Magdaleno the Sun Angel Funk Award and Randy Watson the Len and Rena Gordon “Spunky” Award.

The Jean Chaudhuri Memorial Scholarship recognizes the achievements of an American Indian student who has succeeded in the world outside his or her culture.

“Transitioning from a reservation school to the largest university in the U.S. was definitely a challenge,” said Bia. “It was my first time being away from my family … from my culture.”

Initially, Bia pursued an undergraduate degree in health sciences but changed his major to global health. He was interested in gaining a better understanding of disease, health and well-being for all cultures.

“I understand the need for cross cultural leaders to work in under-represented communities because I have personally witnessed the growing health disparities of obesity, alcoholism and mental health on American Indian reservations,” said Bia.

Bia had the opportunity to learn about the various factors that affect health, including poverty, globalization and disease, during a study abroad program in London, England. In addition, he interned with the City of Phoenix and ASU Obesity Solutions to monitor physical activity and deliver health education to Hispanic school children from low income families in Phoenix, Arizona.

“It’s a humbling experience to receive an award that continues to motivate and support American Indian changemakers,” said Bia, who started a master’s program in cellular and molecular medicine at the University of Arizona. “Through generous financial support I am able to focus on my academics and continue my passion for health care.”

Grecia Magdaleno, a women and gender studies major, said she was equally grateful for being selected as the recipient of the Sun Angel Funk Award. This award is presented to an undergraduate who achieves academic prominence and demonstrates community-focused awareness with his or her actions.

“Social justice deeply matters to me,” said Grecia, who will graduate this December. “I am a youth organizer and activist for Planned Parenthood Generation Action, as well as a lead volunteer, spokesperson and patient advocate.”

Grecia has been taking what she’s learned in the classroom and applying it to the work in her community. She’s developed leadership skills, empowered young people to become politically active and became an ally to other marginalized communities through her degree program and time with Planned Parenthood.

“My community needs justice, and they need it now,” she said.

As a gay, Latina, first-generation college student, Grecia had to overcome financial difficulties and strenuous family relations while working on her undergraduate degree. She said she’s looking forward to her last semester and plans to pursue a master’s degree in social work after graduation.

“Scholarships like this make it possible for me to see myself not only graduating, but going to graduate school and ultimately finding a career that’s fulfilling,” said Grecia.

Randy L. Watson II, a molecular biosciences and biotechnology major, has been on a similar journey to find a fulfilling career. He worked in construction, fabrication and behavioral health before deciding to go back to college. Nearly a decade later, Watson has earned three associate degrees and a biotechnology certificate from Mesa Community College. In addition, he’ll receive a bachelor’s degree in spring 2017.

“Each degree represents a milestone for myself in searching for what I wanted to do with my life,” said Watson. “They represent so much for me as they are tangible accomplishments in my pursuit of a post-secondary education.”

Watson was awarded the Len and Rena Gordon “Spunky” Award for demonstrating “spunk” in overcoming obstacles to succeed as an undergraduate. He said his dyslexia has been one of the biggest challenges he faced as a student, but has helped him develop a mental fortitude for studies.

“It has made me build a stronger work ethic, diligence in my studies and has made me develop a strong attention to detail,” said Watson. “It has also taught me to look at something I may be deficient in and build that skill and work through those uncomfortable moments and persevere.”

Mary Lane Porter is a Bachelor of Fine Arts candidate in the Arizona State University School of Dance. During 2010, her nonprofit organization, Dancers And Health Together (DAHT), Inc., received grant and pledge support from various organizations, including: the Performing Arts Venture Experience within the ASU School of Theatre and Film; the Do Something organization; Kickstarter.com; and also wa...

Mary Lane Porter is a Bachelor of Fine Arts candidate in the Arizona State University School of Dance. During 2010, her nonprofit organization, Dancers And Health Together (DAHT), Inc., received grant and pledge support from various organizations, including: the Performing Arts Venture Experience within the ASU School of Theatre and Film; the Do Something organization; Kickstarter.com; and also was approved by five of the Osborn School District schools for fall 2010 community programs.

Porter is the founder, CEO, and the Board of Trustees President for DAHT, Inc., a nonprofit organization with a mission to present opportunities that develop awareness of the mind and body connection through dance. Porter started the nonprofit because she says that she began noticing too many people focus on what their minds can do for the world, but they forget about their bodies. From personal experience and witnessing other similar stories, Porter says she realized dance is a way to fix this problem. 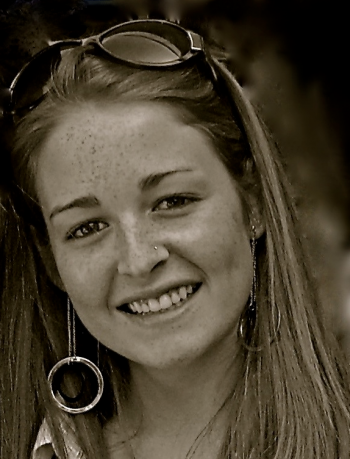