Opposing campaigns in the Arizona ballot initiative to legalize recreational marijuana will be featured as presenters along with neutral experts at the Citizens’ Initiative Review (CIR) voter-education exercise this week.

“We are pleased our citizen participants studying the proposed Regulation and Taxation Marijuana Act will hear from both sides, as well as from top experts from both Arizona and out of state, in coming up with the pros and cons of this important ballot measure,” said Thom Reilly, director of Morrison Institute for Public Policy at Arizona State University.

ASU Morrison Institute for Public Policy conducted its first Citizens' Initiative Review (CIR) two years ago. The 2016 CIR exercise, to be held Aug. 11-14 in downtown Phoenix, will focus on the ballot initiative that would legalize recreational marijuana. Download Full Image

Morrison Institute is conducting the CIR, which is funded by the Arizona Citizens Clean Elections Commission. The CIR event, which is open for public viewing, will be Aug. 11-14 at the A.E. England Building, 424 N. Central Ave., in downtown Phoenix.

CIR is somewhat similar to a deliberation process by a jury — but without the verdict. A representative sample of Arizona’s electorate thoroughly examines the complexities, nuances and potential impact of a ballot proposition. At the end of the four-day exercise, CIR participants provide their fellow voters with a Citizens’ Statement, which details both the pros and cons of the initiative in everyday language. However, there is no recommendation for which way Arizonans should vote.

The CIR includes presentations by independent experts and advocates for both sides of the initiative.

Advocates from the NO campaign:

The schedule for presenters is as follows:

The public is invited to watch any or all presentations or CIR exercise, but as observers only. Questions and interaction are reserved for CIR participants as they seek information for their Citizens’ Statement, which will provide fellow voters with unbiased, unfiltered and understandable factual and credible information.

The CIR Advisory Board selected the proposition as the topic of study for the CIR, which for the first time will be held on a statewide level in Arizona.

“The CIR Advisory Board saw the marijuana issue as the proposition with the greatest potential impact on the state in a wide range of areas including the economy, criminal justice system, taxes, community health and social values,” Reilly said. “It’s a complex issues with many dynamics that voters may need assistance in fully understanding.”

The 20 to 24 participants selected for the 2016 CIR exercise were chosen according to the state’s demographics — including political party, ethnicity, age, gender, education and region. The selection process ensures a representative sample of the state’s electorate and population. CIR participants will be given a stipend and lodging, if necessary, for the CIR exercise. Session moderators will help move the CIR process forward but will not influence individual or group discussions or their outcomes.

“We’re trying to cut through the noise so voters can hear from fellow voters the most important and reliable information about a complex issue such as the proposed legalization of marijuana,” said Andrea Whitsett, associate director of Morrison Institute and CIR project manager.

A Morrison Institute poll conducted just before the 2012 election identified a dire need for increased voter awareness concerning ballot measures, noted David Daugherty, senior research fellow at Morrison Institute and a longtime data and survey researcher who will serve as one of the CIR moderators.

Nearly three-quarters of Arizona voters polled said they found ballot measures too complicated and confusing to fully comprehend. As a result, 60 percent use their limited knowledge to struggle through the propositions, while more than 20 percent don’t vote one way or the other. Some respondents (5.5 percent) said they just vote “no” on all ballot propositions because they feel they do not have enough information about the initiatives to understand.

The Citizens’ Statement will list both pros and cons for the initiative, but will not make any recommendation or endorsement in favor or opposition of the ballot measure itself.

“This format of not telling people how to vote mirrors Morrison Institute’s longstanding practice of empowering the public with the pros and cons of initiatives and trusting they’ll make their own informed decisions based on the propositions’ individual merits,” Reilly said. “Voters are looking for credible information, not somebody else telling them how to vote.”

Similarly “Understanding Arizona’s Propositions,” a nonpartisan and neutral examination of the pros and cons of ballot initiatives, is a popular feature posted at MorrisonInstitute.asu.edu during election years with statewide initiatives. The briefings, which will be done for all three 2016 ballot initiatives, are touted by voters and voter advocates for their concise explanations, as well as their nonbiased presentation and neutral position.

The 2016 Arizona CIR Advisory Board, a volunteer group of community leaders from around the state, consists of:

The CIR model itself was developed by Healthy Democracy, an Oregon-based nonpartisan nonprofit involved in CIR exercises in Oregon, Colorado, Massachusetts and Arizona. Healthy Democracy again is providing advisory and support staff for the Arizona CIR exercise on a contract basis. The Arizona CIR, however, will be overseen, facilitated and conducted by Morrison Institute, which held its first CIR in September 2014 regarding the Phoenix city government pension reform proposition.

The CIR model was awarded both the International Association for Public Participation’s Award for North American Project of the Year and the Project of the Year internationally in 2013. It was named by Harvard University as one of the Top 10 programs for the Roy and Lila Ash Innovations in Public Engagement in Government Award in 2015.

Established in 1982, Morrison Institute for Public Policy is a leader in examining critical Arizona and regional issues, and is a catalyst for public dialogue. An Arizona State University resource and part of the ASU College of Public Service and Community Solutions, Morrison Institute uses nonpartisan research and communication outreach to help improve the state and region’s quality of life.

Every year, new students arrive at Arizona State University's campuses excited to start a new chapter in life. Some will even blaze new paths in innovation and research, but it all starts at move-in.This fall, nearly 14,000 students will move into ASU’s 21 residence halls across ASU’s four campus locations Aug. 12-14.“This is an exciting time for incoming freshmen,” said Kellie Cloud, exec... 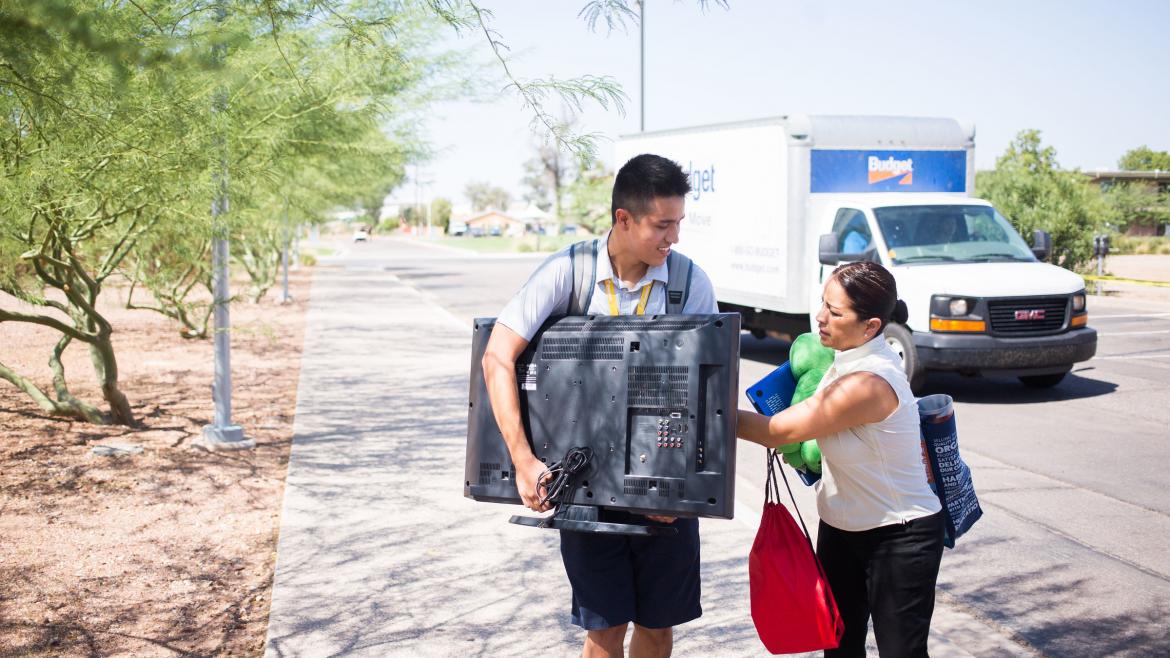 Every year, new students arrive at Arizona State University's campuses excited to start a new chapter in life. Some will even blaze new paths in innovation and research, but it all starts at move-in.

“This is an exciting time for incoming freshmen,” said Kellie Cloud, executive director of University Housing. “Living on campus is a huge first step into adulthood, and we take great care in ensuring freshmen successfully acclimate to college life. It is here where students will form lifelong friendships, engage in student activities and find support networks, crucial components for student success throughout college and beyond."

ASU’s residential college model is designed to help students succeed academically by housing students together based on academic major. First-year students form connections and create a network of friends with similar educational interests. Additionally, students benefit from collaborative living spaces that offer on-site tutoring and multi-use rooms that can be used for study groups, workshops and events

• arrive at the assigned date and time

With all that help, students can relax, get comfortable in their new home and explore the campus before the first day of class Aug. 18. Fall Welcome Week is the perfect time to explore campus, connect to ASU services and resource, and make new friends.

ASU kicks off the beginning of the school year with free events for new and returning students. Nearly 200 events give students the opportunity to explore everything ASU has to offer.

Don’t miss out on the must-attend signature events:

Experience Sun Devil pride at its finest. This is a high-energy, exciting event to introduce you to what it means to be a Sun Devil. This annual event is the perfect way to officially welcome all of our new Sun Devils to ASU.

Celebrate the diversity that students bring into the ASU community. Enjoy performances, activities and food from a variety of cultures found at ASU. Need a ride to the Sun Devil Welcome and Culture Festival? Free shuttles will be provided to transport students living on the West, Polytechnic and Downtown campus locations.

But make sure to catch other fun events at every ASU campus. Activities include:

Sun Devils have an impact on the local community and make a positive change in the world. Join this university-wide initiative to participate, volunteer and make a change.

Hear from university leadership, meet fellow ASU parents, faculty and staff and learn about upcoming campus-specific events. Parents are encouraged to attend family events at the location of their students major. Refreshments will be served.

Passport to ASU, Sparky’s Carnival, WestFest and Club Hub are opportunities to learn about student clubs and organizations at ASU. Check out what students are doing, enjoy free food, fun giveaways and join a club!

Attend a Student Employment job fair and secure a part-time job on or off campus. Pre-registration is not required for students.

One of the oldest traditions at ASU — students have been whitewashing the “A” since the 1930s, a ritual that marks the start of the new year and a fresh start.

Download the ASU Events app and cross all the events off your Sun Devil bucket list. Share your photos, videos and the excitement using #ASUFallWelcome on social media. For more information, visit https://eoss.asu.edu/welcome.