Kids love to do experiments. When David Meltzer taught middle-schoolers, they especially enjoyed making a generator out of copper wire.

But nothing extinguishes that joy of discovery more than teachers who are unenthusiastic about teaching science because they don’t know the subject matter.

And that’s where Meltzer is working to make a difference, by teaching future teachers how to do experiments, so they learn the activity as well as the content.

“The method that has been followed for years is that you learn a little bit about the subject, you get an acquaintanceship, and you try to teach it,” said Meltzer, who started his career as a theoretical physicistMeltzer also is a consultant to the American Physical Society and the Physics Teacher Education Coalition and senior consultant to the National Task Force on Teacher Education in Physics. and is now an associate professor in the Mary Lou Fulton Teachers College.

“It’s a myth that students will learn very much if the teacher doesn’t know the material.”

Meltzer, who works at the Polytechnic campus at Arizona State University, just completed a four-year project funded by the National Science Foundation to improve science teaching in grades kindergarten through eight by using classroom activities. He said that typically, K-8 teachers aren’t required to have specialized science training, even though they're teaching physics concepts including mechanics, Newton’s laws of motion, electricity and magnetism, in physical science classes.

“You don’t teach physical science by standing at a blackboard and lecturing to students. That’s not effective. You get them involved in carrying out investigations, solving problems, doing experiments,” he said.

Some of the $300,000 grant was spent on equipment that students use for experiments. They mount little carts on tracks to study mechanics, use ultrasonic motion detectors to measure velocity and acceleration, and create magnets out of coiled copper wire.

Meltzer has taught physical science to the middle schoolers at the ASU Preparatory Academy on the Polytechnic campus, and he said all students love to see what they can build.

“We created a power generator, and you scale that up and it’s the Hoover Dam and you light up a city,” he said.

A one-semesterThe class is SCN 250, “physical science by inquiry.” class isn’t enough to completely prepare future teachers to teach physical science but they get good experience with how to incorporate the activities.

“They’re learning both how to teach, very hands-on, and they’re learning the science content so they aren’t trying to teach something they don’t really understand — which is the big problem in all science education, and we're behind other countriesAmerican 15-year-olds’ science scores ranked 24th in the world in the 2012 Program for International Student Assessment..” Meltzer also is an expert in the historySome of the grant money was spent on adding material to a web site that chronicles the history of science education. of teaching physics. He said that dating back to the 1880s, when physics was called “natural philosophy,” teachers knew that students learned best when they did experiments.

“Teachers back then at the high school and college level made tremendous efforts to expand activity-based teaching but they largely did not succeed,” he said, because by the 1940s, many more Americans started attending high school and the demand for teachers exploded.

“The lecture method took over as the primary method of teaching and the experiments were very prescriptive, like following a cookbook,” he said.

The United States saw a burst of interest in teaching science after the Russians beat the United States into space with Sputnik in 1957 and again in the last few years with the focus on STEMscience, technology, engineering and math. But Meltzer said that eagerness has never translated to better teacher training.

“The Next Generation Science StandardsThe Next Generation Science Standards is an updated set of learning goals for kindergarten through 12th grade. The standards were developed by 26 states, including Arizona, but Arizona has not adopted the standards. are very ambitious but from my standpoint, it will fall short because it’s not linked to a realistic effort to improve the education of science teachers, or, critically, K-8 teachers, where the foundations are set.”

Top photo: David Meltzer shows how he teaches students to use an ultrasonic motion detector to measure velocity on a low-friction track. Photo by Charlie Leight/ASU Now.

Success is a ‘sherd’ thing

David Abbott, associate professor at the School of Human Evolution and Social Change, received not one, but two distinguishing awards this summer for his archaeological work in Arizona: the Arizona Archaeological Society’s 2016 Professional Archaeologist Award and the Lifetime Achievement Award from the Governor’s Archaeological Advisory Commission.Abbott, who specializes in researching the Ho...

Success is a ‘sherd’ thing

David Abbott, associate professor at the School of Human Evolution and Social Change, received not one, but two distinguishing awards this summer for his archaeological work in Arizona: the Arizona Archaeological Society’s 2016 Professional Archaeologist Award and the Lifetime Achievement Award from the Governor’s Archaeological Advisory Commission.

Abbott, who specializes in researching the Hohokam who inhabited Arizona (including the area of ASU’s Tempe campus) until around 1450, is recognized not only for his many years of dedication to the field, but also for his method for sourcing ceramics, which revolutionized the study of ancient pottery in the desert Southwest. 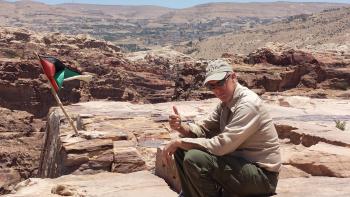 “Over the last 25 years, Dave’s remarkable research has transformed our understanding of Hohokam society and continues to play a major role in setting the research agenda for Hohokam archaeology,” said fellow ASU archaeologist Keith Kintigh.

Others would agree. His projects “have greatly increased the understanding of prehistoric archaeology in the central Arizona region of the Southwest,” said Glenda Simmons, chair of the Arizona Archaeological Society.

Abbott originally chose his field because of his lifelong passion for the little details that make up history.

“I have always been interested in the past, largely because I want to know how we came to be as we are. And I am fascinated by the way material remains, like pieces of broken pots, can reveal the past to us,” he said.

Thanks to his innovative ceramic analysis methods, those tiny sherds can reveal much more than meets the eye.

By examining ultra-thin sections of potsherds, Abbott is able to get a close look at the different makeups of the temper — usually sand or small bits of rock — that was added to the clay to make it more stable during baking. Southern Arizona is so geologically diverse that he can track where a particular pot was made just by knowing what kind of temper it contains. When the place where he found the sherd is different from where it originated, Abbott knows there was a network of trade between the two regions.

“Abbott’s analysis of pottery transactions among Hohokam villagers, which has a precision unmatched across the globe, has — with amazing clarity — revealed networks of economic interaction and community structure,” Kintigh stated.

Since Abbott first pioneered this technique, other archaeologists have picked it up and used it around the world from Korea to Mexico.

The most surprising thing that Abbott himself has learned from applying this method is the degree of Hohokam economic complexity, which surpassed anything that archaeologists had imagined beforehand.

“The evidence is pointing to an economy that operated at a regional scale,” he said.

He painted a picture of thousands of ceramic products made each year by special artisans and sent out to hundreds of villages; agricultural surpluses that valley farmers traded for large game, crafts and goods from the uplands; ceremonial ballgames played in one of hundreds of stadiums and watched by crowds of locals and visitors; and marketplaces assembled regularly for the barter of goods from all over the Hohokam territory.

“This is the picture of vibrant and surprisingly sophisticated life in ancient Arizona that emerges from the pottery research,” he explained.

Knowledge about these people, Abbott pointed out, is not only interesting, but relevant to Arizonans today.

The Hohokam lived in their villages and towns for over a thousand years, built and managed the largest irrigations infrastructure in prehistoric North America, and turned the Salt River valley into an agricultural haven. Modern Phoenix, on the other hand, is just the opposite: it’s been here only one hundred years, yet already we have water challenges and other sustainability issues.

“Clearly, the Hohokam offer some lessons to be learned about environmental challenges, population pressure and water usage over the long haul,” Abbott said. “As we work to understand their success, we gain insight about who we are and where we are headed.”

For this professor, working with students is an integral part of discovering more about the Hohokam. He sees graduate education as an apprenticeship, where the student and faculty member work on a particular problem together.

“These collaborative undertakings are wonderfully productive, and it is especially gratifying as they contribute to our growing understanding of Arizona’s ancient past,” he said.

So, what advice does Abbott have for those inspired to pursue archaeology?

“Archaeology is an exciting business to be in. Field work is all about discovery — you never know what’s going to turn up. And the lab work is like putting a puzzle back together. But it’s also a lot of hard work and it takes a long time to become proficient. You really have to have a ‘fire in the belly’ in order to be successful.”

You don’t have to be a professional, however, in order to participate in archaeology. Abbott explained that he does a good amount of research with the help of what he calls “citizen archaeologists” — average people with a love for Arizona’s past and a willingness to get their hands dirty. In fact, he tries to interact with the community whenever he can, engaging volunteer groups in fieldwork, giving presentations for public audiences and offering site tours.

“I really like bringing together volunteers, students and professionals, while raising ASU’s profile to the public,” he said.

With a ceramic-analysis breakthrough to his name and a commitment to the people of Arizona — past and present — it’s no wonder that Abbott became the winner of two awards, including a Lifetime Achievement. He isn’t in it for fame, however; for him, the job is a reward in itself.

“I love my job. I love working with colleagues and students to figure things out. It’s always a thrill when we learn something we did not know before about the remarkable people of the ancient past.”