One institute, two academic units and four schools within the College of Liberal Arts and Sciences at Arizona State University are welcoming new directors and chairs. These distinguished individuals have showcased an impeccable ability to lead and will incubate significant growth and development for their respective units, the college and the New American University as a whole.

“Implementing the dual mission of providing outstanding teaching and mentorship along with creating new scholarship is challenging and requires experienced leaders with strong academic credentials,” said Patrick Kenney, dean of the college. “We’re saying goodbye to a talented group of leaders, but we feel confident our new chairs and directors will have outstanding success moving their units forward in the upcoming years.” Professor Neal Woodbury has been appointed as the director of the School of Molecular Sciences within the College of Liberal Arts and Sciences. Download Full Image

Baker's research focuses primarily on sports culture, film authorship and the representation of race, ethnicity and gender in American cinema. Professor Baker, director of film and media studies, will bring a strong background of teaching and administrative experience to his new leadership role as interim chair of the department. He has several publications on his areas of expertise and has been invited to present his work at multiple film and media conferences.

Berman’s research interests include comparative culture and literature, German orientalism and colonialism, Germans in Kenya, travel literature and translation studies. Berman joins ASU from Ohio State University where she was a professor in the Department of Comparative Studies. She has authored various books, articles, chapters, encyclopedic entries and reviews on her areas of specialization. She’s proficient in five languages, including German, Arabic, French and Kiswahili.

Fox's research has focused on English Renaissance literature and culture, with particular attention to classical intertextuality, the history of emotions and gender studies. Prior to her appointment to interim director, Fox served the institute as the associate director for the past three years. She’s an associate professor in the Department of English and will continue working on the medical humanities initiative and the imagining health project with Mayo Clinic.

Von Hagen teaches history of modern Russia and Eurasia in the School of International Letters and Cultures as well as global politics in the School of Politics and Global Studies. His research focuses on empire, war, revolution and nationality. In 2008, von Hagen was elected President of the American Association for the Advancement of Slavic Studies. He has authored and co-edited several publications and intellectual contributions to the field.

Moore specializes in child development and psychoeducational assessment. Her research examines school, family and community factors that influence the cognitive test performance, academic achievement, educational attainment and career choices of female and male ethnic minority youth. Prior to her appointment as director in the School of Social Transformation, she was the faculty head of the African and African American studies program at ASU.

Nelson has focused her research on examining spatial and spatial-temporal patterns to better understand the underlying processes behind societal challenges, from extreme heat to social equity. Prior to joining ASU, she held various leadership roles at Canada’s University of Victoria, including founder and director of the Spatial Pattern Analysis and Research Laboratory, director of the Geomatics Program and the Lansdowne Research Chair in Spatial Sciences.

Riding In’s research focuses on repatriation, as well as historical and contemporary Indian issues. Prior to his appointment to interim director, Riding In joined the School of Justice Studies, now part of the School of Social Transformation, in 1990. In 2004, he co-founded the American Indian Studies program, which has been his academic home for the past 12 years. Riding In, a citizen of the Pawnee Nation of Oklahoma, is the editor of Wicazo Sa Review: A Journal of Native American Studies and the co-editor of Native Historians Write Back: Decolonizing American Indian History.

Woodbury’s research interests include the role of chemical diversity, the patterned fabrication of molecules on surfaces and the concept of nanoscale control of molecular assembly. He joined the faculty of the School of Molecular Sciences in 1988. He’s also a faculty member in the Center for Innovations in Medicine in the Biodesign Institute. Woodbury has co-founded two companies to identify and monitor disease states and develop a prophylactic cancer vaccine.

There was no mistaking the hyper-attenuated form of Michael Phelps on the pool deck at the Mona Plummer Aquatic Center, but he was not the only Rio-bound Olympian on campus this past year.Phelps, the greatest swimmer ever, helped to draw attention to Arizona State University as a perfect place to train for the Olympics, telling ASU Now in January: “I swam indoors my whole career. Once we moved h... Swimmers, other athletes refined techniques in Tempe before heading to Rio

There was no mistaking the hyper-attenuated form of Michael Phelps on the pool deck at the Mona Plummer Aquatic Center, but he was not the only Rio-bound Olympian on campus this past year.

Phelps, the greatest swimmer ever, helped to draw attention to Arizona State University as a perfect place to train for the Olympics, telling ASU Now in January: “I swam indoors my whole career. Once we moved here, that’s when it sunk in that I have a clearer head when I’m outside. Being able to see the sun every day is something that’s beneficial.”

Phelps — who has been chosen as the U.S. flag bearer for the opening ceremony — is in Rio de Janeiro now for his fifth Olympic games, where he will compete in the butterfly and 200 individual medley. Three of his U.S. swimming teammates also trained at ASU: Chase Kalisz, who will compete in the 400 individual medley, and Cierra Runge and Allison Schmitt, both in the 800 free relay.

Besides the great facilities, the swimmers came to ASU to work with Bob Bowman, the personal coach of Phelps who is the head coach for the Sun Devils and the U.S. Olympic swim team. Another ASU coach who drew an Olympian to train here is Cliff English, who heads the Sun Devils’ new triathlon program. He is the personal coach of Australian triathlete Ashleigh Gentle, who came to ASU in July to train for two weeks before heading down to Rio. 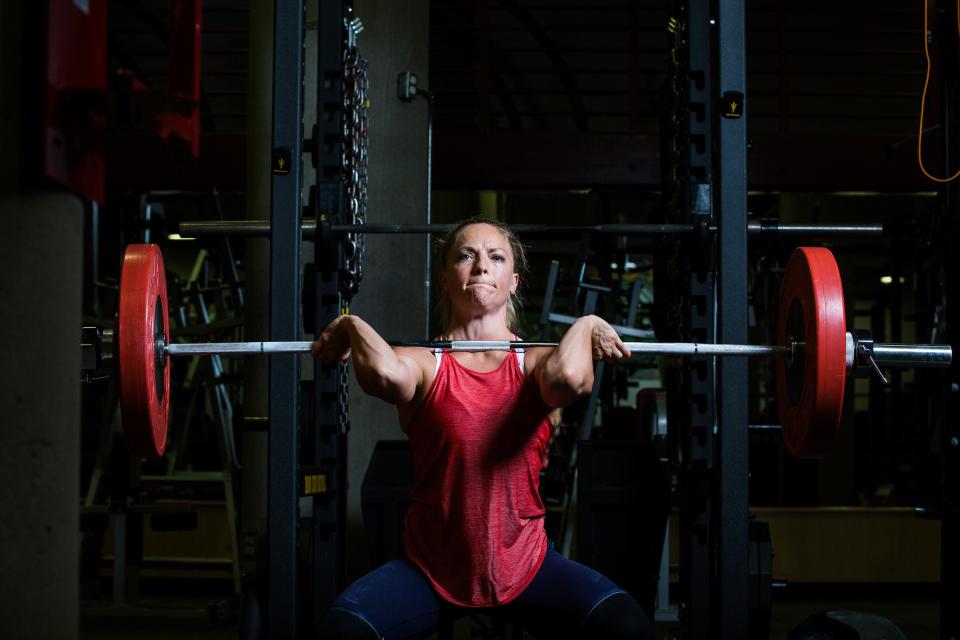 Weight lifter Morghan King trained at ASU before heading to Rio de Janeiro to represent the United States at the Olympics. Photo by Deanna Dent/ASU Now

Morghan King, a member of the U.S. women’s weight-lifting team, is from Washington state but spent the past few months training with the weights every day in the Carson Student Athlete Center at ASU with her Phoenix-based coach.

“When you’re in a place that looks like this, it’s hard not to succeed,” King said.

Top photo: Swimmer Michael Phelps prepared to compete in his fifth Olympics by training at the Mona Plummer Aquatic Center at ASU with his coach Bob Bowman, who is the head coach of the U.S. swim team.