Looking for another Earth? ASU is part of an international team that has pinpointed which of the more than 4,000 exoplanets discovered by NASA's Kepler mission are most likely to be similar to our rocky home.

The research, detailed in a recently published article in the Astrophysical Journal, outlines 216 Kepler planets located within the "habitable zone" — the area around a star in which a planet's surface could hold liquid water. Of those, they list 20 that are the best candidates to be habitable rocky planets like Earth. 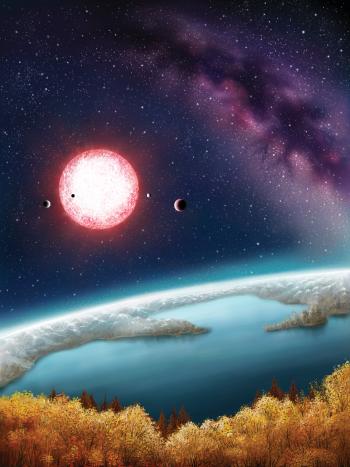 An artist's concept depicts Kepler-186f, the first validated Earth-size planet orbiting a distant star in the habitable zone — a range of distances from a star where liquid water might pool on the surface of an orbiting planet. The discovery of Kepler-186f confirms that Earth-size planets exist in the habitable zone of other stars and signals a significant step closer to finding a world similar to Earth. Image by Danielle Futselaar Download Full Image

“Finding new Earth-like planets that could perhaps be habitable to human beings or even inhabited by other lifeforms is such a tantalizingly wonderful idea that you can't help but have your curiosity piqued,” said ASU’s School of Earth and Space Exploration postdoctoral scholar and research team member Natalie Hinkel.

To determine whether a planet may be habitable, the team needed to understand certain physical characteristics about each planet such as size, orbit and distance from its star.

If a planet is too close to its star, it will experience a runaway greenhouse gas effect, like Venus. But if it's too far, any water will freeze, as is seen on Mars. The science team sorted the planets by whether they were in a conservative or a more optimistic interpretation of this habitable zone. Then they further sorted them by planet size: smaller, rocky planets vs. larger gas giants.

"This is the complete catalog of all of the Kepler discoveries that are in the habitable zone of their host stars," said Stephen Kane, an associate professor of physics and astronomy at San Francisco State University and lead author of the study. "That means we can focus in on the planets in this paper and perform follow-up studies to learn more about them, including if they are indeed habitable."

While this research predominantly focused on the physical characteristics of the planets, Hinkel’s next step in determining habitability of planets is to understand the planets' composition, namely the presence and amount of elements like carbon, silicon, oxygen and iron.

“These are the elements that are the building blocks not only of the planet itself, but also of life,” Hinkel said.

The research was supported in part by the NASA Nexus for Exoplanet Systems Science (NExSS). The School of Earth and Space Exploration’s Steven Desch is the principal investigator of the NExSS Exoplanetary Ecosystems team, which studies detection of life on exoplanets. Their charge is to prioritize stars and planets for follow-up observations, based on how likely the planet is to yield conclusive evidence for or against life.

Robinson, currently an editor-at-large at the Globe, is joining the Cronkite School in January as a Donald W. Reynolds Visiting Professor, teaching an investigative journalism class for graduate students and advanced undergraduates. He also will work with reporters in Cronkite News, the student-staffed, professionally led news division of Arizona PBS. 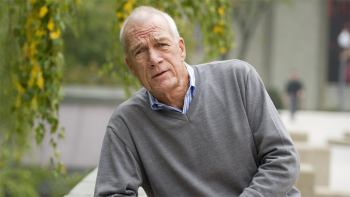 With more than three decades as a journalist at the Globe, Robinson was editor of the newspaper’s Spotlight Team, which won the 2003 Pulitzer Prize for Public Service for its comprehensive investigation into sexual abuse by Catholic priests. The investigation, which exposed a decades-long cover-up that shielded the crimes of nearly 250 priests, was made into the film “Spotlight,” which won 2015 Academy Awards for Best Picture and Best Original Screenplay.

“I am delighted for this opportunity to play a role at one of the best — and certainly the most innovative and exciting — journalism schools in the country,’’ Robinson said. “I’m honored to be a part of the school’s distinguished faculty, and I’m looking forward to working with so many talented students.’’

Before his professorship begins, Robinson will visit the Cronkite School this fall to screen and discuss “Spotlight” as part of the school’s regular movie night. The public screening, sponsored by the Valley of the Sun Chapter of the Society of Professional Journalists, is scheduled for 6:30 p.m., Wednesday, Sept. 14, in the Cronkite School’s First Amendment Forum on the ASU Downtown Phoenix campus.

“Walter Robinson represents the very best in investigative journalism,” said Cronkite School Dean Christopher Callahan. “His reporting and newsroom leadership have brought to light important issues that have uncovered serious corruption and abuse. We are thrilled to welcome Robby to the Cronkite School and look forward to him mentoring our tremendous students.”

Robinson joined the Globe in 1972 and went on to report on politics and government before covering the White House during the Ronald Reagan and George H. W. Bush administrations. He has covered four presidential elections and was the lead Globe reporter for the 1988 and 1992 elections.

In 1990 and 1991, Robinson was the newspaper’s Middle East Bureau chief during the first Persian Gulf War. He went on to be the Globe’s city editor in 1992 and then the metro editor for three years.

In the late 1990s, he was the Globe's roving foreign and national correspondent and spent much of that time reporting on artworks looted by the Nazis during World War II that ended up in American museums. For his reporting on the illicit trade in antiquities, Robinson was awarded the Archaeological Institute of America's first-ever outstanding public service award in 1999.

From 2007-2014, Robinson was a distinguished professor of journalism and Northeastern University in Boston. His investigative reporting students produced 26 Page One investigative stories for The Boston Globe. He returned to the Globe in 2014 as an editor-at-large.

Robinson served four years in the U.S. Army, including a year in Vietnam as an intelligence officer with the 1st Cavalry Division.

Robinson is a 1974 graduate of Northeastern University and has been awarded honorary degrees by his alma mater and Emerson College. He was a journalism fellow at Stanford University and is co-author of the 2002 book, “Betrayal: Crisis in the Catholic Church.”

The Donald W. Reynolds Foundation is a national philanthropic organization founded in 1954 by the late media entrepreneur for whom it is named. Headquartered in Las Vegas, it has committed more than $115 million nationwide through its Journalism Program.