Professor Aaron Baker, whose scholarship focuses on representations of social identity in American cinema and who was the former head of ASU’s film and media studies program, has been named interim chair of the Department of English at ASU for academic year 2016-2017.

Baker assumed the role recently vacated by professor Mark Lussier, who had been chair since 2013. Doris Warriner, an associate professor of English who has previously directed English’s writing, rhetorics and literacies program, will fill the associate chair position formerly held by professor Karen Adams. 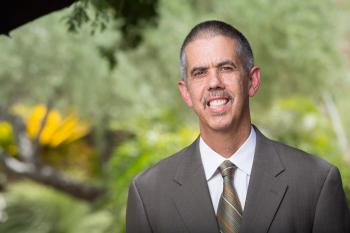 Aaron Baker, a professor in film and media studies at ASU, has been named interim chair of the Department of English for 2016-2017. “My responsibility this year,” he said, “will be to effectively manage the large and productive English department on the ASU Tempe campus so all its many parts are functioning as well as possible when the new chair arrives in 2017.” Photo by Deanna Dent/ASU Now Download Full Image

“I am very much looking forward to working with the leadership team in the Department of English over the next year,” said George Justice, humanities dean in the College of Liberal Arts and Sciences. “Aaron Baker brings years of experience with film and media studies, and Doris Warriner has great ideas and demonstrated competence. This is interim leadership that will made a strong and positive difference for ASU, and I am grateful to both Aaron and Doris for stepping up to the challenge.”

“My responsibility this year,” said Baker, “will be to effectively manage the large and productive English department on the ASU Tempe campus so all its many parts are functioning as well as possible when the new chair arrives in 2017.”

Baker has been at ASU since 1995. In addition to serving as director of film and media studies, he also oversaw the founding and development of the program’s online Master of Advanced Study (MAS) degree.

He teaches both graduates and undergraduates in courses ranging from introductory film studies to the 500-level courses “Film Analysis” and “Crime and Violence in American Film.”

Baker’s research focuses primarily on portrayals of American sports culture as well as film authorship. His books — which include “Out of Bounds: Sports, Media and the Politics of Identity” (1997), “Contesting Identity: Sports in American Film” (2003) and most recently, career analyses of directors Steven Soderbergh (2011) and Martin Scorsese (2014) — reflect those interests. Baker received his PhD in comparative literature from Indiana University. 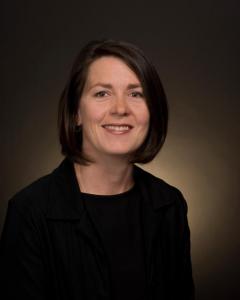 Associate chair Warriner teaches in the Department of English’s writing, rhetorics and literacies program, where her research focuses on experiences of migration and language learning among refugee and immigrant families living in the U.S. She is collaborating with members of local communities and health-care professionals to increase refugee families’ access to health-care services and health literacy. She is also participating in an ASU Institute for Humanities Research Cluster, called “Listening to Refugees,” to design and implement new ways of listening to, working with and responding to refugees in Arizona. Warriner received her PhD in education from the University of Pennsylvania.

Part of Baker’s and Warriner's responsibilities this year will involve overseeing the department’s move into a new physical space to accommodate its growth. Project planners anticipate that the building currently known as the Ross-Blakley Law Library will be renovated and ready for a Department of English move-in during fall 2017. (The College of Law moved to the Downtown campus this summer.)

The Department of English — the largest humanities unit on ASU’s Tempe campus — is composed of several interrelated graduate and undergraduate programs spanning the art and science of language and media including: creative writing; English education; film and media studies; linguistics, applied linguistics and TESOL (Teaching English to Speakers of Other Languages); literature; and writing, rhetorics and literacies. In addition, English is also the home of the largest writing program (composition instruction) in the U.S., shepherding some 10,000 ASU students per semester, in hundreds of majors and disciplines, through college writing courses.

A national search for a chair of English is ongoing, led by Duane Roen, a vice provost and dean at the Polytechnic campus.

Abijith Krishnan just won a Gold Medal at the 2016 International Physics Olympiad (IPhO 2016) held July 11-17 at the University of Zurich. Abi ranked 16th worldwide and is the first ranked US citizen in the Olympiad. Krishnan is a graduating senior at the Basis High School Scottsdale, and has been conducting materials physics research at Arizona State University in the ASU SiO2 CIMD lab under the...

Tempe campus , Department of English , The College of Liberal Arts and Sciences , Humanities

Abijith Krishnan just won a Gold Medal at the 2016 International Physics Olympiad (IPhO 2016) held July 11-17 at the University of Zurich. Abi ranked 16th worldwide and is the first ranked US citizen in the Olympiad. Krishnan is a graduating senior at the Basis High School Scottsdale, and has been conducting materials physics research at Arizona State University in the ASU SiO2 CIMD lab under the supervision of physics professors, Nicole Herbots and Robert Culbertson, since August 2015.

“Abi is extremely gifted, incredibly hardworking, and delightfully humble," Herbots said. "He demonstrates focus, creativity, and tenacity in the lab.” 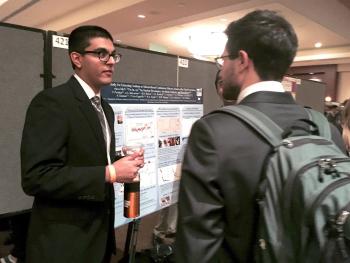 Krishnan acknowledges that his success is shared with many of his peers and professors.

He combined his interests in physics, mathematics, computer science and experimental science to conduct his senior thesis with Herbots using the results from his research at ASU. Herbots and Krishnan chose to call Krishnan's model a Surface Energy-Defect Density model, or SEDD model for short. By working with the research team at ASU, Krishnan collected surface energy measurements by Three Liquids Contact Angle Analysis on very smooth surfaces and compared them the number of microscopic surface defects at the surface. Krishnan wrote a computational analysis code to carefully count point defects and extended defects from the large area/high resolution TMAFM micrographs these defect densities were measured by Shawn Whaley and his works.

Additionally, Krishnan is a co-author on three papers the ASU SiO2 CIMD lab research group of Herbots and Culbertson will present at the 63rd International American Vacuum Society Meeting in November 2016, and his research will also be featured at an invited talk at the 28th International Conference on Application of Accelerators in Research and Industry (CAARI 2016) in October 2016. He is headed to Harvard University this fall.