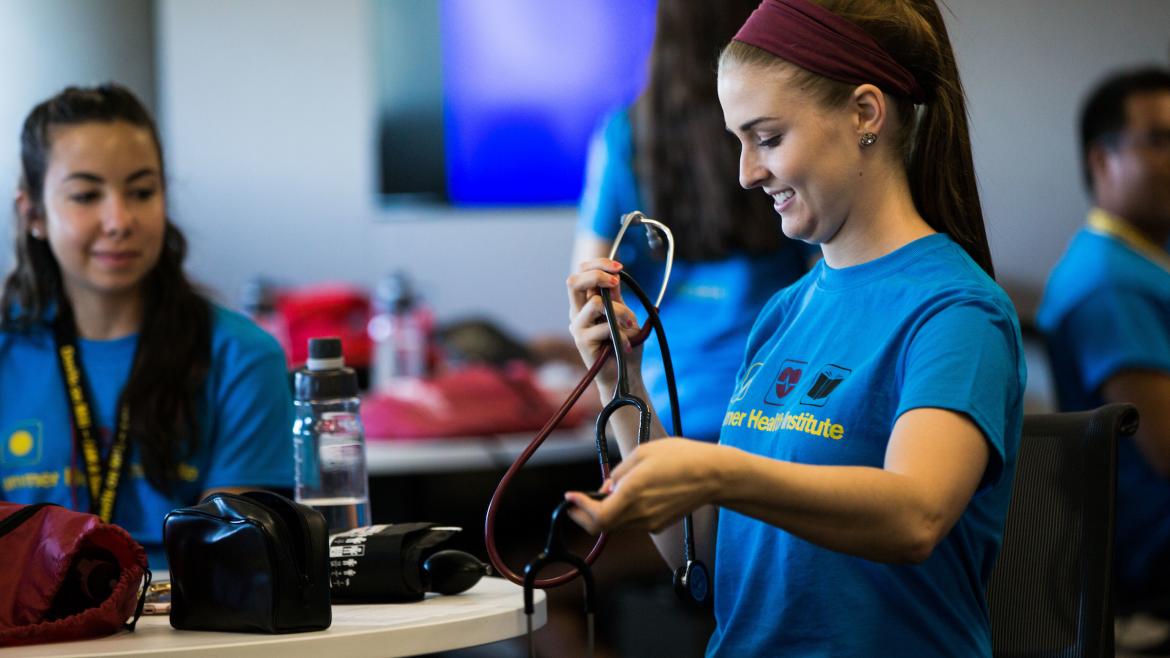 A good kind of early exposure

Taking care to place the stethoscope in just the right spot on his chest, Kelvin Tran waits patiently for the student at the other end of the device to confirm that he hears a heartbeat.

Tran, a College of Health Solutions rising junior, has gotten used to more complex equipment since he began research in genomics and neurophysiology at ASU’s Biodesign Institute in Tempe. But today he’s taking time to help out with the college’s Summer Health Institute at the Downtown Phoenix campus, which aims to expose high school students to a variety of health professions before they get to college.

“I’m here to just kind of work with the students and oversee them, but I’m also giving advice about things like med school applications, and mistakes I should have been more aware of as a freshman,” he said, “or even just cool opportunities that I wish I knew about beforehand.”

According to clinical associate professor Alison EssaryEssary also serves as director of academic partnerships for the College of Health Solutions, and associate director of the School for the Science of Health Care Delivery., there’s a big need for that.

“Many [similar] programs target college-age students, and by the time students reach college, a lot of them have already committed to a certain pathway,” she said. “So we felt we wanted to start earlier than that and expose them to a variety of health professions, outside medicine, outside nursing, and just go big and broad, and really give them opportunities to explore those professions before they get to college and have to really commit.”

Essary and her colleague, senior director of academic services Nate WadeNate Wade serves as the senior director of Academic Services for Pre-Health Professions at ASU’s Downtown Phoenix campus., knew that in order for Summer Health Institute to be truly impactful, it would need to be accessible to students from all backgrounds. Thanks to support from the Arizona Central Credit Union, Summer Health Institute is completely free for all participants.

Now in its third year, the competitive program received 326 applications from 25 states and four countries. Of those, the 24 students chosen to attend represent six states and a variety of backgrounds. Just under half of the 2016 cohort self-reported being on free lunch, and 10 of the participants were determined to be the first in their families to attend a four-year university.

“This is very much a team effort,” Essary said. “So we’re very thankful to our ASU partners and our community partners.”

The institute consists of a weeklong immersive experience in which students who have completed their junior year of high school live on the ASU Downtown Phoenix campus while being exposed to a variety of interprofessional health related activities, including three hours of daily simulation at the University of Arizona College of Medicine-Phoenix campus (observing and practicing things like suturing, IVs, intubation, scrubbing, etc.), interactions with members of the health care team,\ and tours of health care facilities located within the health corridor of Arizona. Clinical associate professor in the School for the Science of Health Care Delivery Alison Essary looks on as high school students participating in the Summer Health Institute at ASU practice taking each other's vitals. 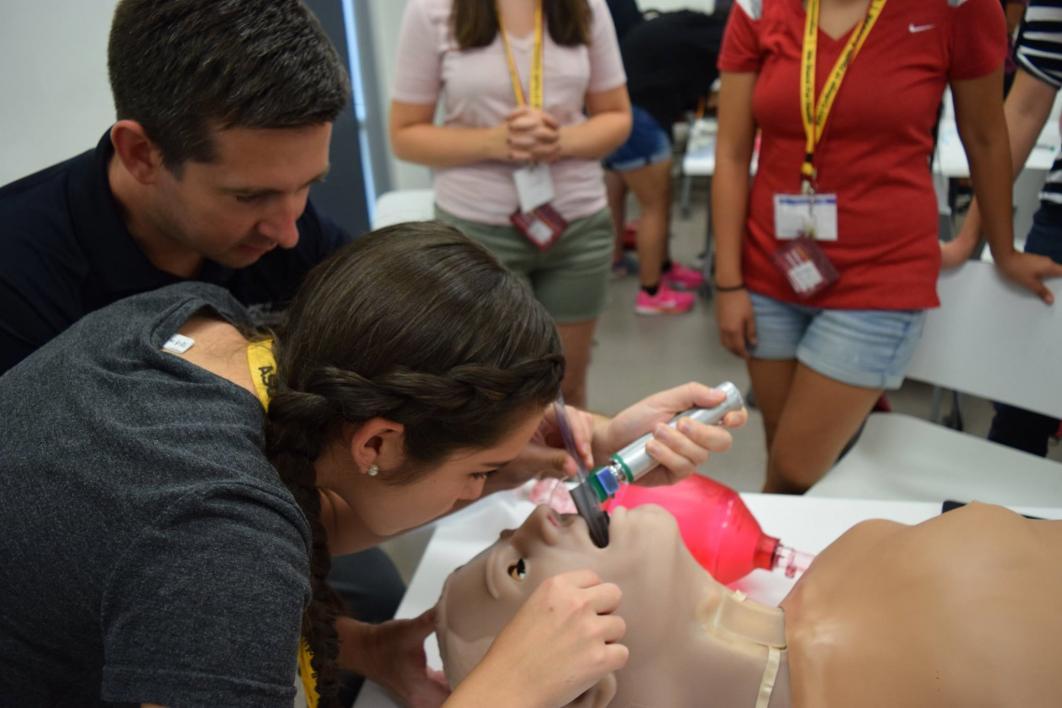 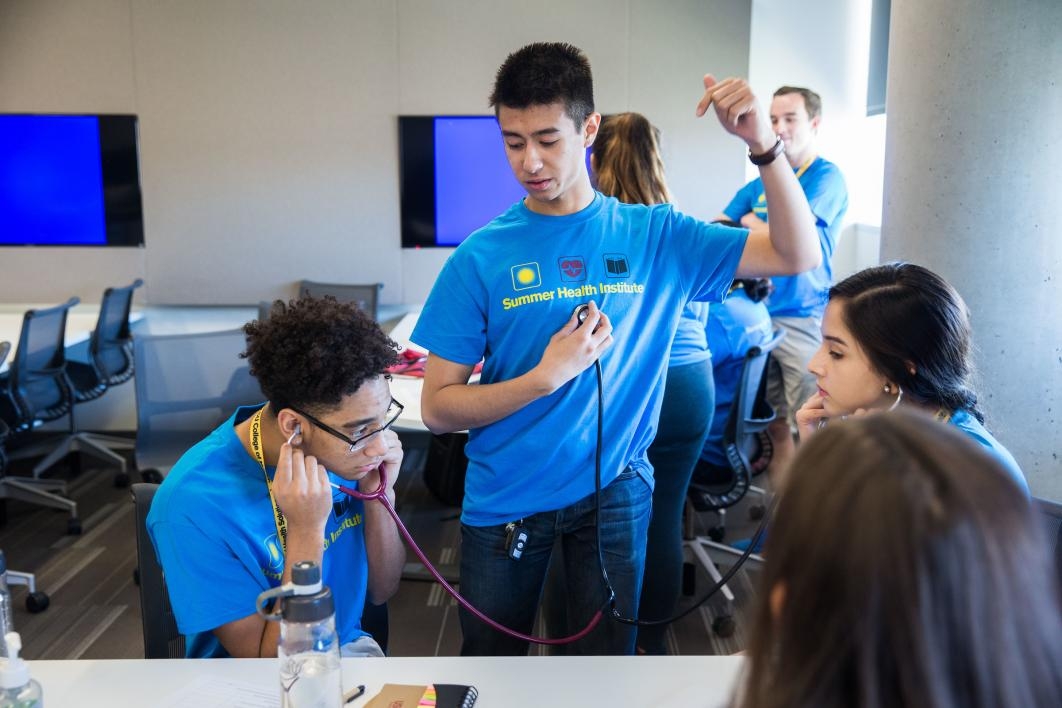 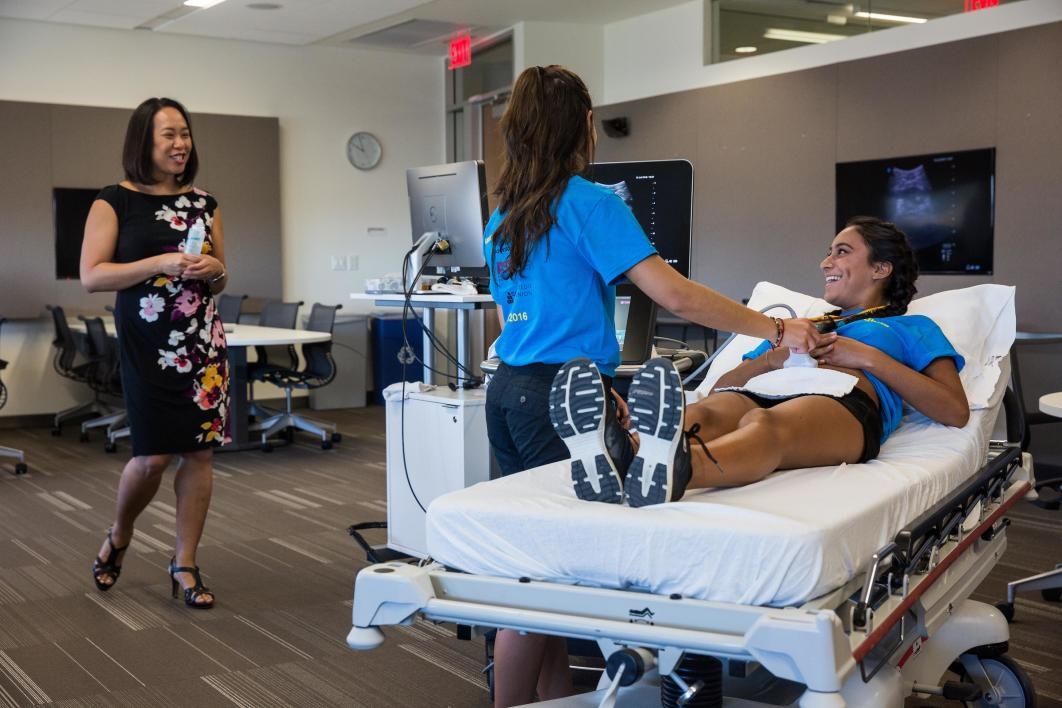 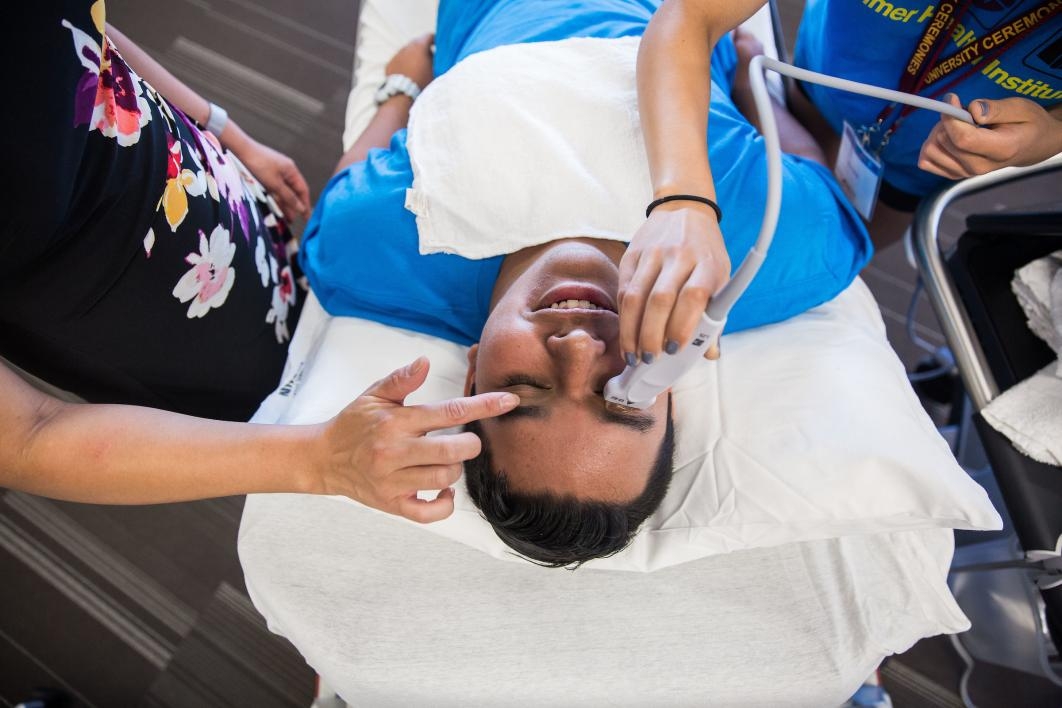 Student Jonathan Olivares finds out you can ultrasound an eyeball during a demonstration with Teresa Wu during the Summer Health Institute July 12.

The students learn about all types of health professions — not just nursing and medicine — such as dentistry, physical therapy, optometry, health care administration and research. Throughout the week, they interact with volunteers whose specialties span the health care sector and even get to attend and participate in an actual physician assistant class — an extremely rare opportunity, Wade said.

Rosa Medina of River Valley High School in Mohave Valley, Arizona, is thinking about becoming a cardiothoracic surgeon or going into biomedical research. The Summer Health Institute addressed both of those interests.

“I’m looking forward to the sheep heart dissection that we have planned because I haven’t dissected a heart yet, and I think that’d be really cool,” Medina said. “And I really liked the visit to the TGen lab because I’m really interested in biomedical research, so seeing what I could do with research was really interesting.”

During a presentation from Teresa Wu, an emergency medicine physician with Banner Health, Medina also got an unexpected chance to glimpse her small intestines during an ultrasound demonstration. Wu is an associate professor of emergency medicine at the University of Arizona College of Medicine-Phoenix campus, one of the Summer Health Institute’s community partners.

“It has been an incredible experience giving back to our community,” Wu said. “I grew up here in Phoenix in a single parent household, and I want to make sure that our community understands that anything is possible if they put their minds to it.”

Following Wu’s presentation, Essary led a workshop on taking patients’ vitals. Both she and Wade not only developed and run the institute, they also teach in it.

“It’s fun to hear what they’re interested in,” Essary said of the student participants. “It’s fun to share in their energy. It revitalizes me and my energy, and it’s why I got into education and clinical practice in the first place.”

Essary is happy to announce that 100 percent of the students who participated in the institute during its first year matriculated to institutes of higher education, with remarks about how they found it “interesting” and “exciting.”

The Summer Health Institute, it seems, is not only doing its job; it’s doing it well. And as Essary points out, “it really fits within the mission of ASU to develop the health care workforce of the future.”

Top photo: Laura Hatty organizes stethoscopes for a lesson on vitals and diagnostics with Alison Essary, during the Summer Health Institute in downtown Phoenix July 12. Photo by Deanna Dent/ASU Now

Scorching, squinting, sweating and learning — welcome to Arizona State University’s Solar Energy Camp, the hottest camp at the hottest university in the hottest state.On a sizzling July morning down at the university’s Polytechnic campus, six students are setting up solar panels and attaching various measuring devices to them.Joo Seung, 16, came from San Diego for the weeklong camp. He has b... 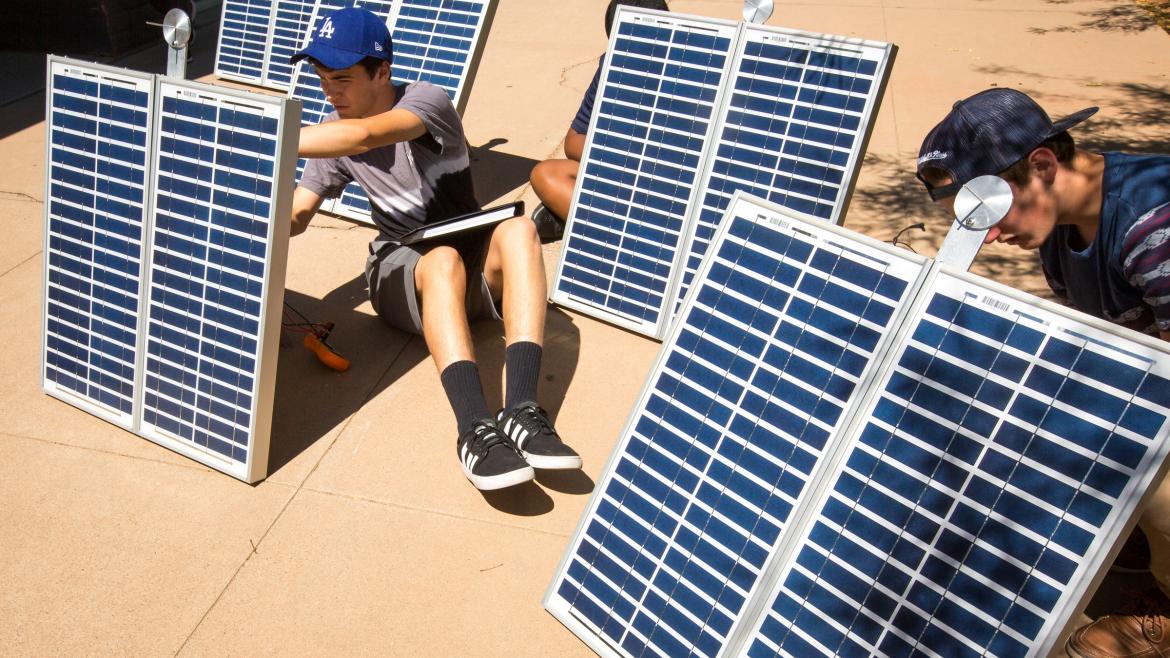 High schoolers get hands-on experience with the science behind solar

On a sizzling July morning down at the university’s Polytechnic campus, six students are setting up solar panels and attaching various measuring devices to them.

Joo Seung, 16, came from San Diego for the weeklong camp. He has been interested in renewable-energy sources since he was in elementary school.

“This year I was reaching out to find out where I could learn about solar energy,” he said.

Everything he found in California was geared toward college students. Seung did some of his own research on the internet but ended up getting lost in overly technical texts. He said he much preferred learning in class, with material that wasn’t aimed at someone with a doctorate in electrical engineering, which is where he said he wants to end up.

“I’ve learned a lot,” Seung said. “A lot of the resources (professor Arunachala Kannan) gave us were very informing.”

Kannan, a professor in the Engineering and Manufacturing Engineering Program in the Ira A. Fulton Schools of Engineering, provided each student with a kit including a battery, inverter, solar panel and other components. When assembled, it is a standalone system.

“The purpose is to give them basic electrical parameters,” Kannan said. He keeps lectures to a half-hour —  it’s a camp, not a class — and then they get to work.

“I think they’re excited about doing hands-on,” he said.

They learn how solar modules work, power performance, safety and which parameters control performance. One aspect of the latter? “Once you get above 100 degrees, performance is not good,” Kannan said.

Panels need to be washed off. Dust hampers their performance. The most famous example of this is when the Curiosity rover stopped working on Mars because its solar panels were dusty. Scientists expected this, and they predicted that was it for the rover. However, wind blew the dust off, and Curiosity is still going strong.

The students set up panels in the sun on a sidewalk, measuring their angle and direction. The panels have sundials on them. At the end of camp, the students are responsible for a report including notes, pictures and measurements. It’s meant to cement what they’ve learned into their heads.

“When they submit a report, many things become clarified,” Kannan said.

Michael Geddis, 16, attends the American Leadership Academy high school in Queen Creek. The school has a STEM program that requires attending an outside enrichment program. They provide students with a list of possibilities, including Poly’s Solar Energy Camp. 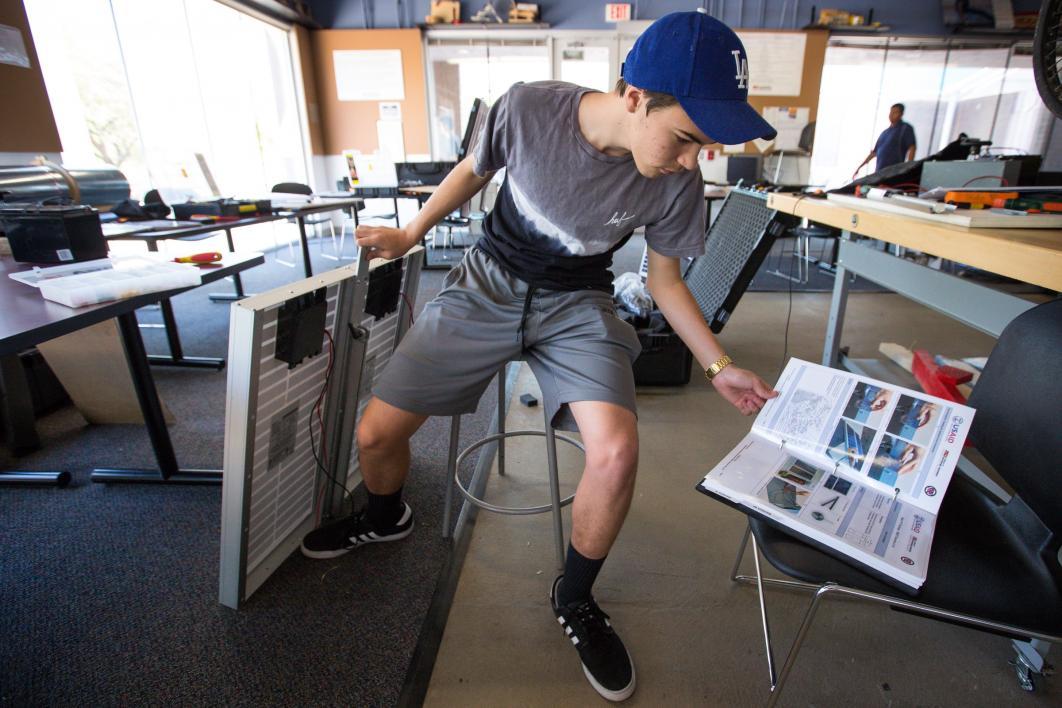 Carlos Nunez, 15, of Tempe, double-checks the instruction manual to make sure he has properly connected his panels at the Solar Energy Camp on the Polytechnic campus on July 13. Six high school students collected data about photovoltaic panels' tilt angle, direction, cloud coverage and dust covering. 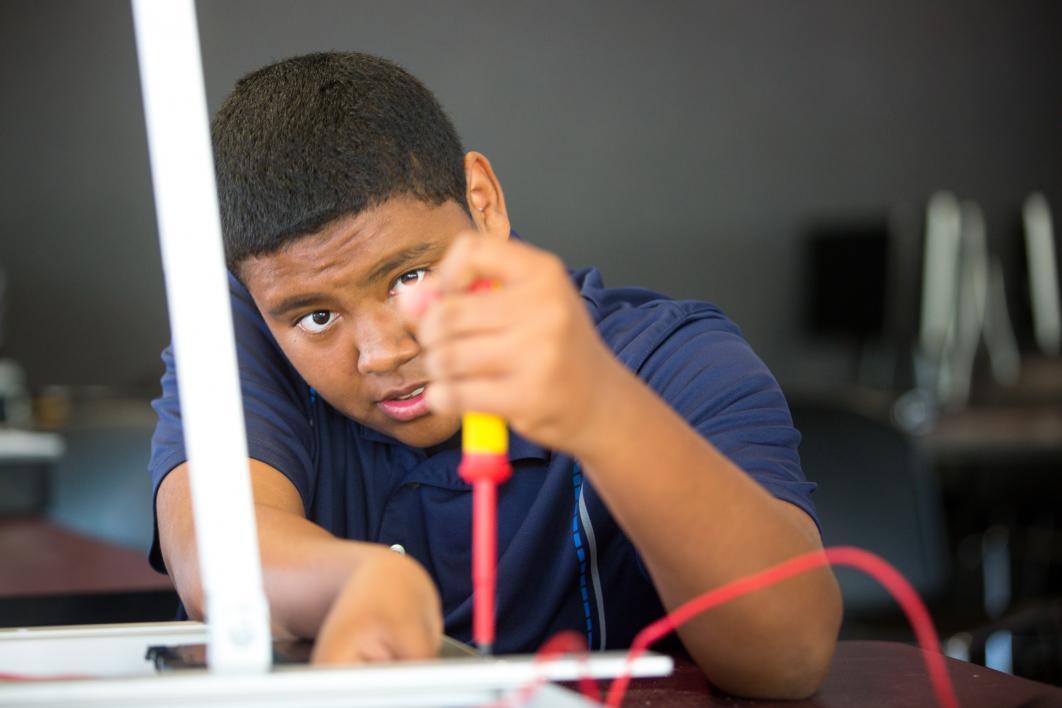 Trevon McNeal, 14, of Mesa, tightens the brace holding his panels at the Solar Energy camp. Each student at camp is given a kit including a battery, inverter, solar panel and other components. When assembled, it is a standalone system. 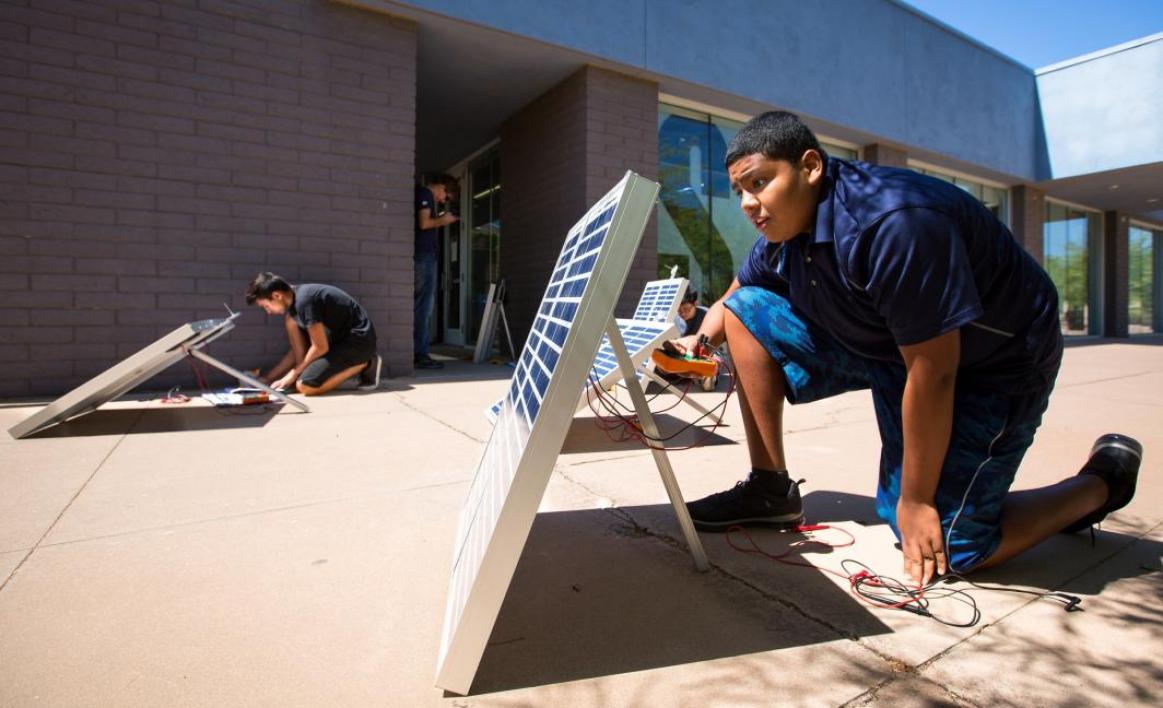 Trevon McNeal checks measurements from his panels on the Polytechnic campus on July 13. 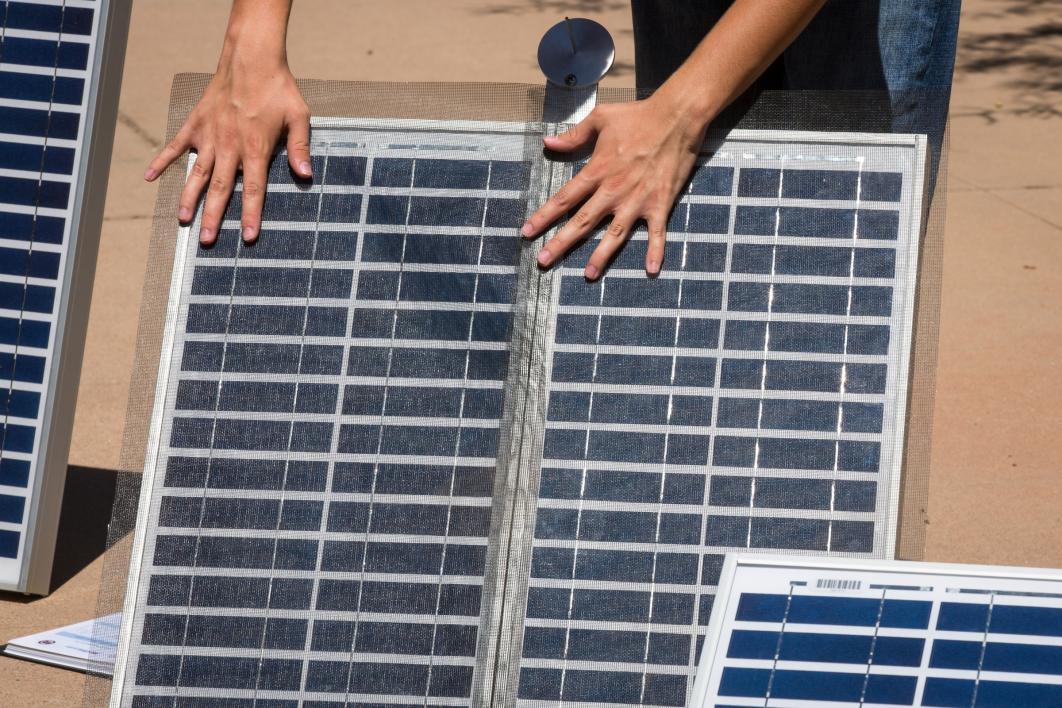 The students use both a light and a dark cover on their panels to simulate cloud cover. 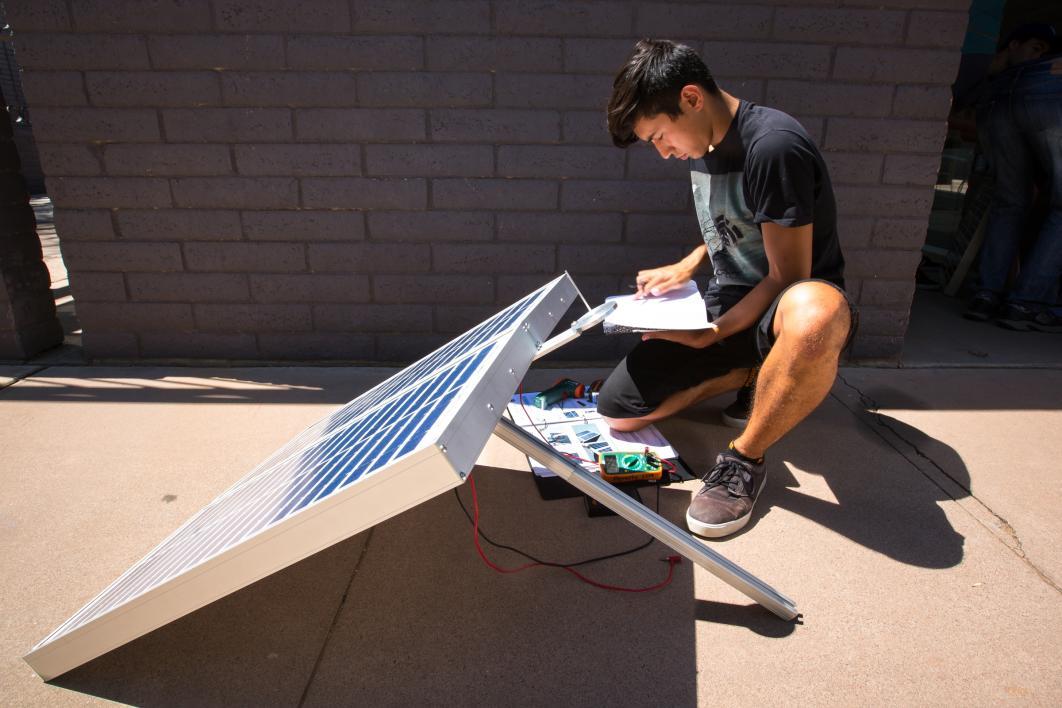 Cameron Lee, 17, of Queen Creek, checks his data from his panels. At the end of camp, the students are responsible for a report including notes, pictures and measurements. It’s meant to cement what they’ve learned.

Top photo: Carlos Nunez, 15, of Tempe, and other members of Solar Energy Camp adjust the angle of their panels on the Polytechnic campus on July 13. Photo by Charlie Leight/ASU Now