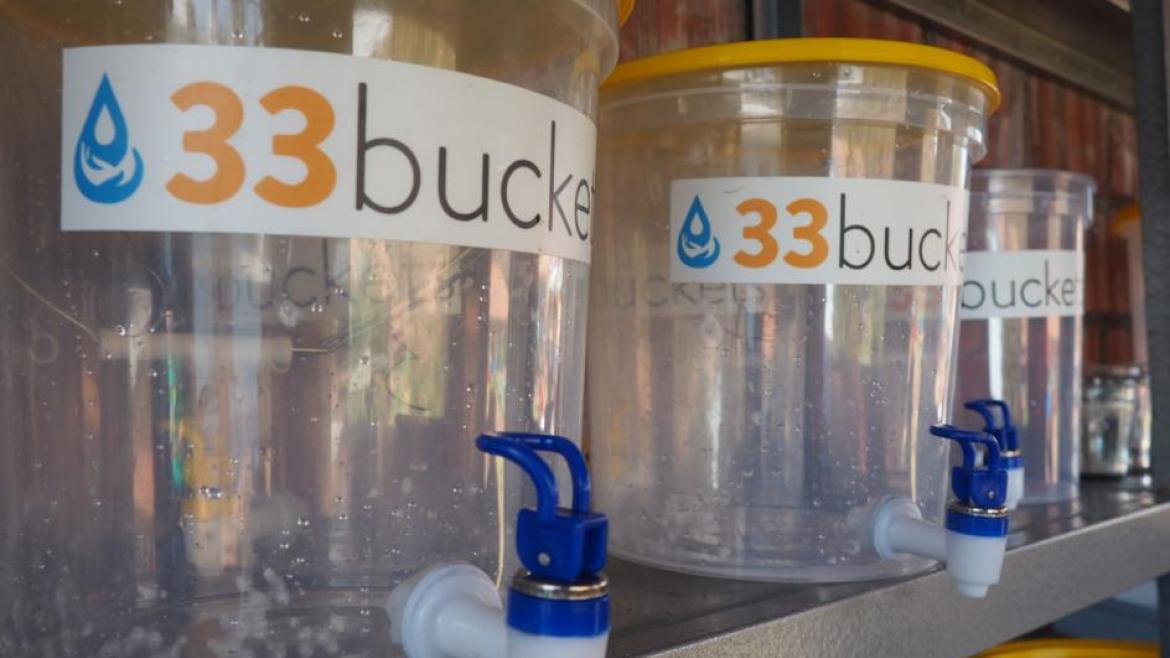 World problems don’t get much bigger than the global water crisis, but innovators from Arizona State University have created a purification system and distribution model that has helped thousands of people in developing nations. The group’s work has expanded this summer, and it promises to grow.

The team — known as 33 Buckets — has traveled to Bangladesh, the Dominican Republic and Peru to install their small, customizable water filters and to train community leaders to maintain the devices and sell the clean water they produce.

“We have the technology to solve the clean water problem in the world,” said Swaroon Sridhar, who studies biomedical engineering and handles the group's global partnerships. “What hasn’t been addressed is an effective method of global distribution. So we changed our focus to distribution and components for filtration as well as education, which is just as important to solving the water issue.”

The efforts started in 2010 as part of the Engineering Projects in Community Service Program in ASU’s Ira A. Fulton Schools of Engineering when the team designed a bucket-based filtration system for a girls’ school in Bangladesh that would eliminate arsenic, which has the atomic number 33. The system had to be redesigned when they realized arsenic wasn’t the contamination source — but the name stuck.

In time, the group — Mark Huerta, Vid Micevic, Paul Strong and Sridhar — created a system that now helps more than 12,000 people in Bangladesh. Last summer, they launched beyond the EPICs program and started working with international nonprofits. Last month, 33 Buckets launched clean water programs in the Dominican and Peru.

“So much of that first project was spent initially learning about the issue and then designing a model that would make the best impact long-term for the community,” Strong said. “Now, we have our model and philosophy of focusing not just on design, but also on full self-sustaining, community-run projects.”

In the Dominican, members of a rural community had to walk more than a mile to fetch water from a cave. They couldn’t rely on a system of pumps and pipes because it had been poorly maintained and the groundwater source it drew from was contaminated by bacteria and coliforms, including E.coli. But now, more than 1,000 people have access to their own source of clean, affordable water using the 33 Buckets system.

In Peru, meanwhile, about 1,500 people near Cusco now get clean water from a local business that employs the 33 Buckets method. They had been depending on a water supply with bacteria levels that were 2,000 times over a limit set by the World Health Organization.

The problem of water access isn’t solved. Around the world, about 1.8 million people don’t have clean drinking water and about 8 million die of water related diseases each year. The World Economic Forum calls the global water crisis the biggest threat to the planet over the next decade.

The World Health Organization estimates that more than half of the global disease problem can be solved by clean water access and sanitation and hygiene education.

The 33 Buckets team has set out to address the problem one community at a time. Their approach allows different filters and components to be swapped in and out based on a community’s specific needs.

“The design depends on what we find, what’s locally available and what can be maintained,” Strong said.

Huerta, the group’s CEO, said the customizable system is “really good for rural areas because it’s gravity-fed, no electricity required. The maintenance is also really easy. Only a few minutes a day, and it lasts for seven to 10 years.” 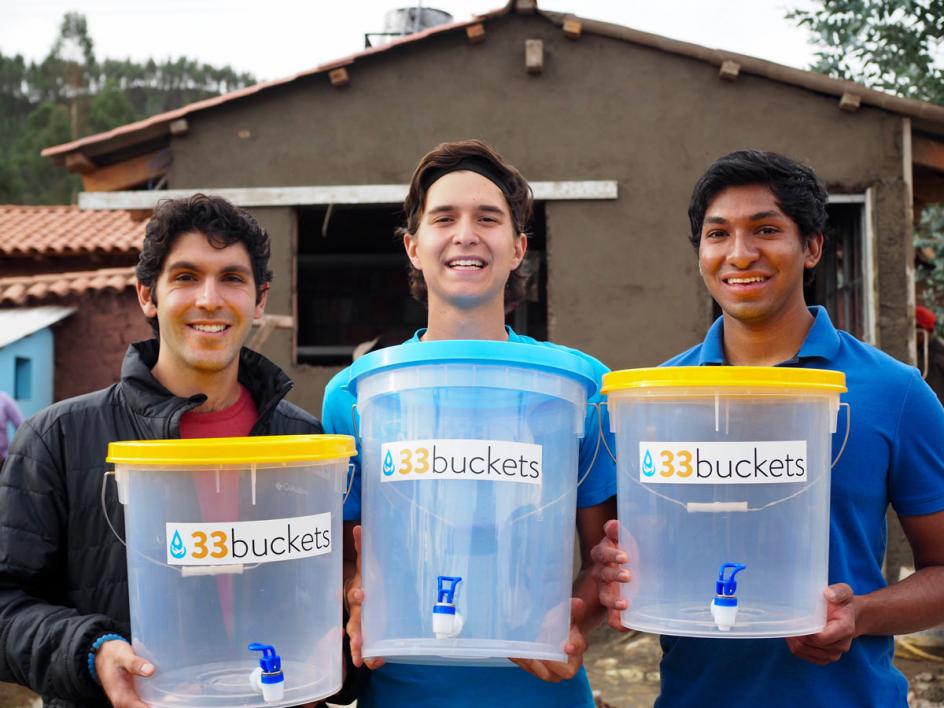 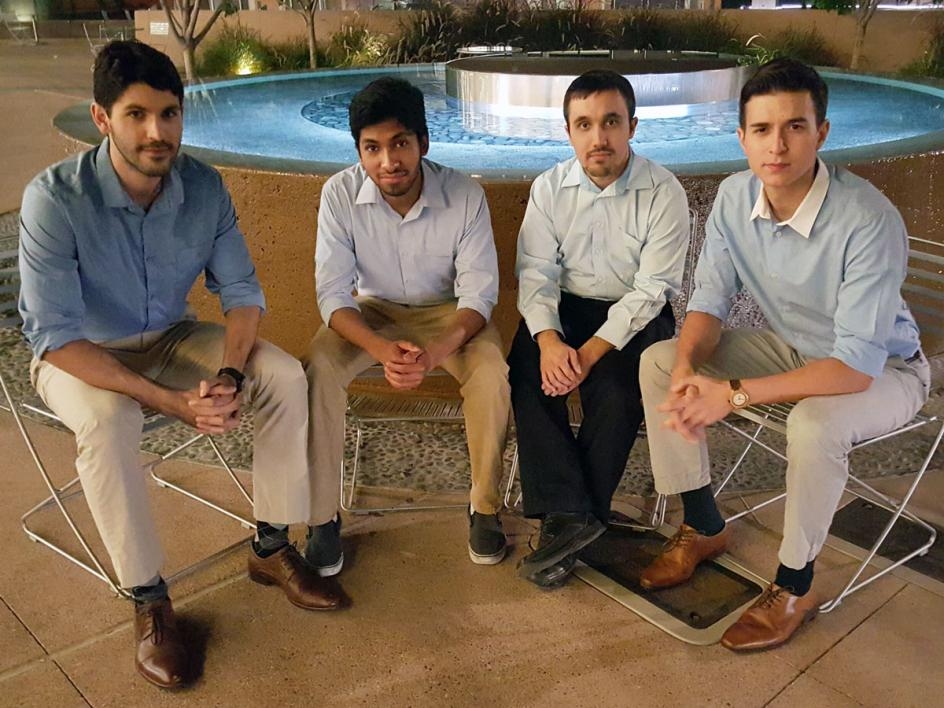 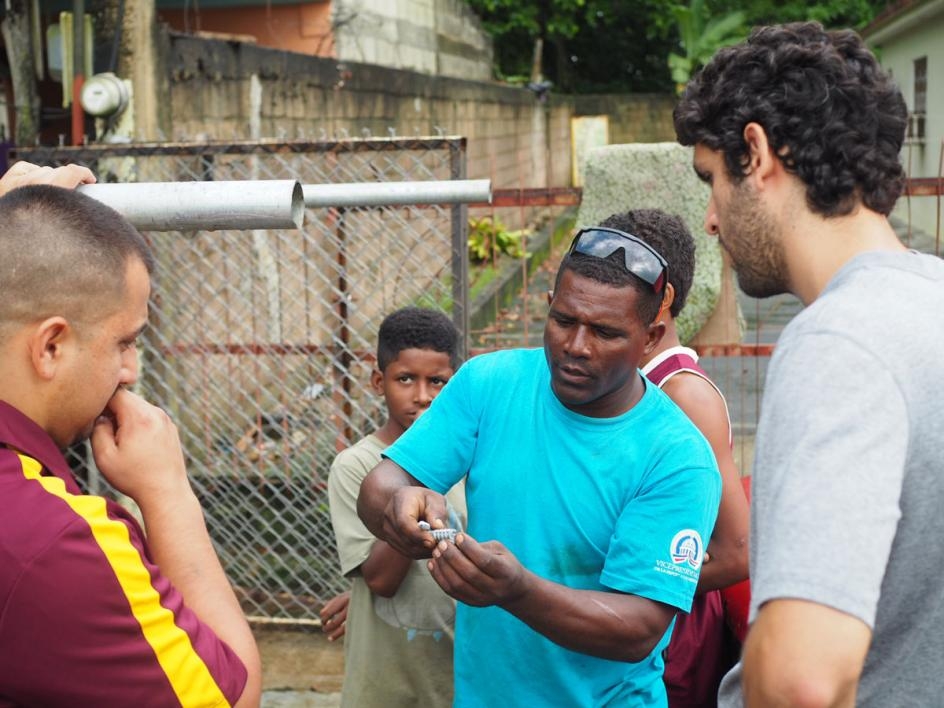 Mark Huerta worked with local construction crews to build and maintain the water system in the Dominican Republic. 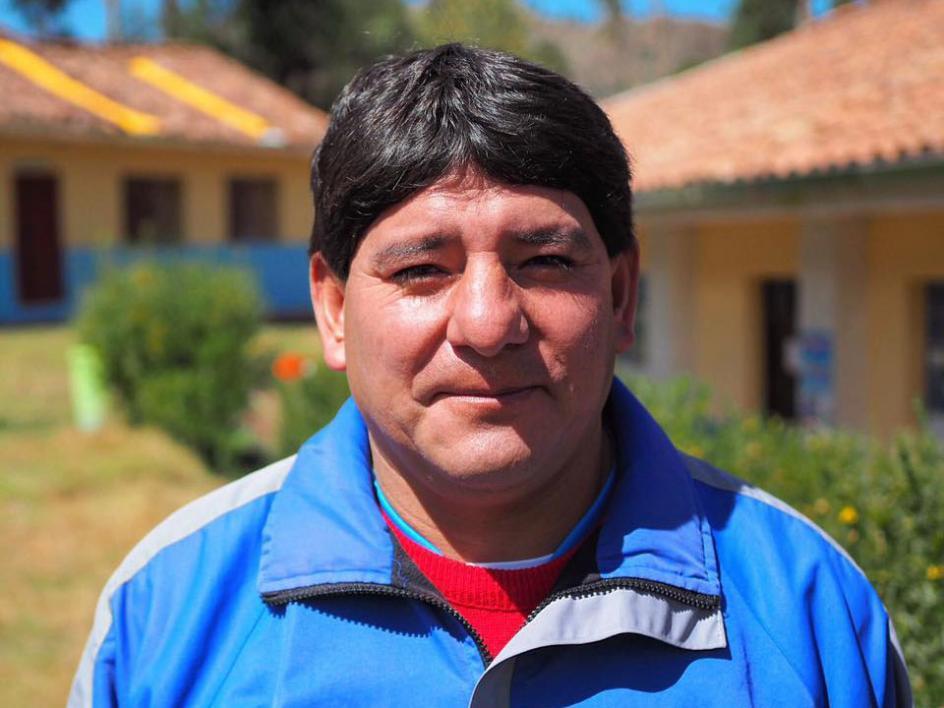 School principal Agrepino serves as the Peruvian community's entrepreneur and oversees business practices as a member of the water advisory board. 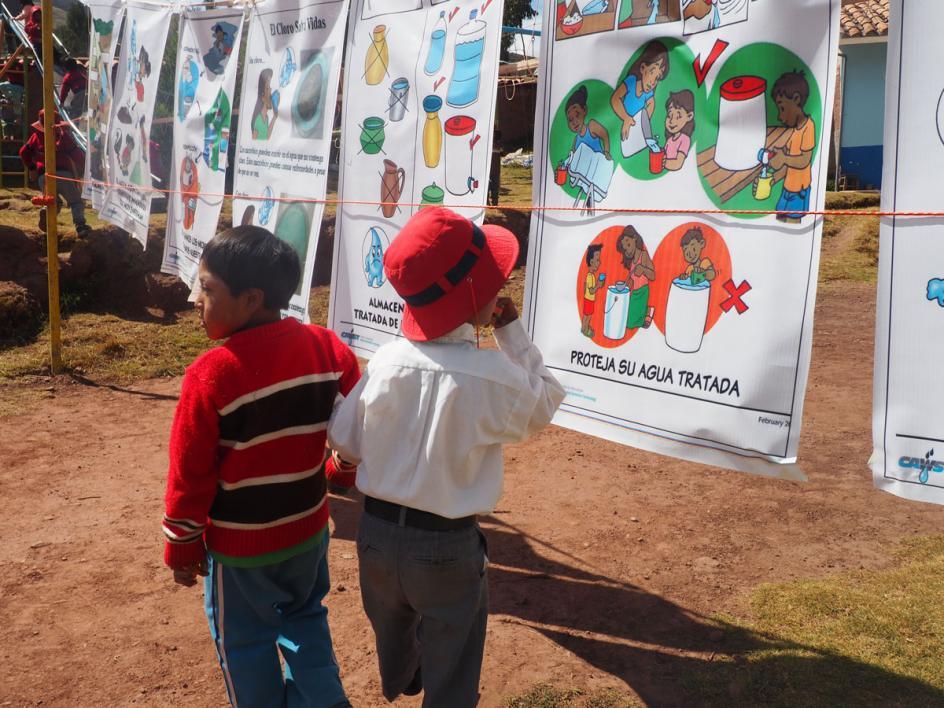 The Huillcapata community learned about water sanitation and hygiene during the launch day educational seminar in a poster session and discussion with community leaders. 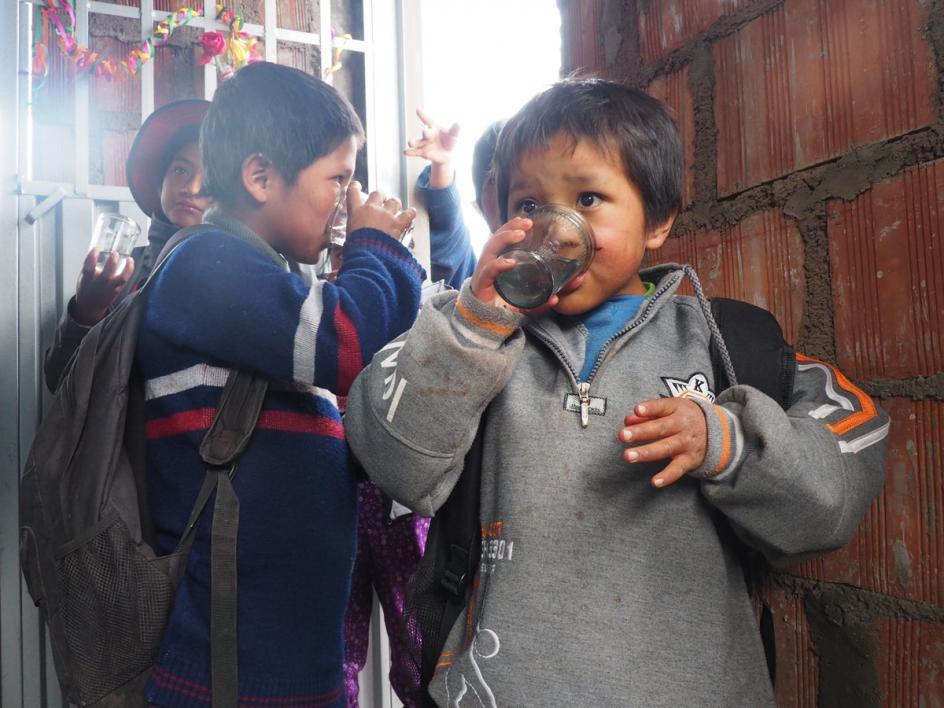 The kids from Huillcapata, Peru, try the new filtered water during the education event. 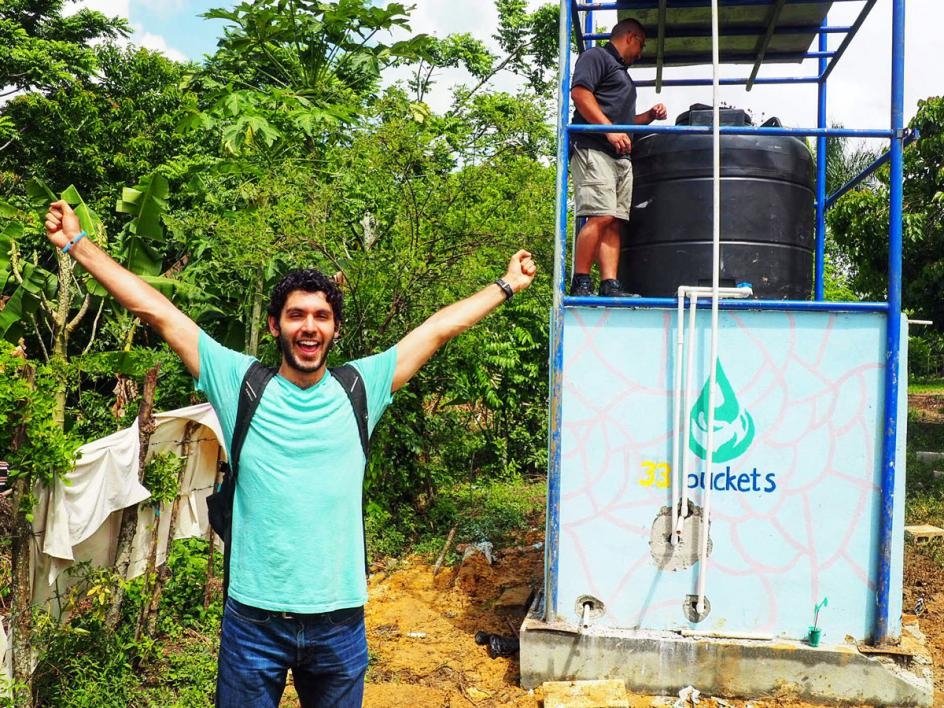 Mark Huerta celebrates in front of the finished water filtration system in the Dominican Republic. 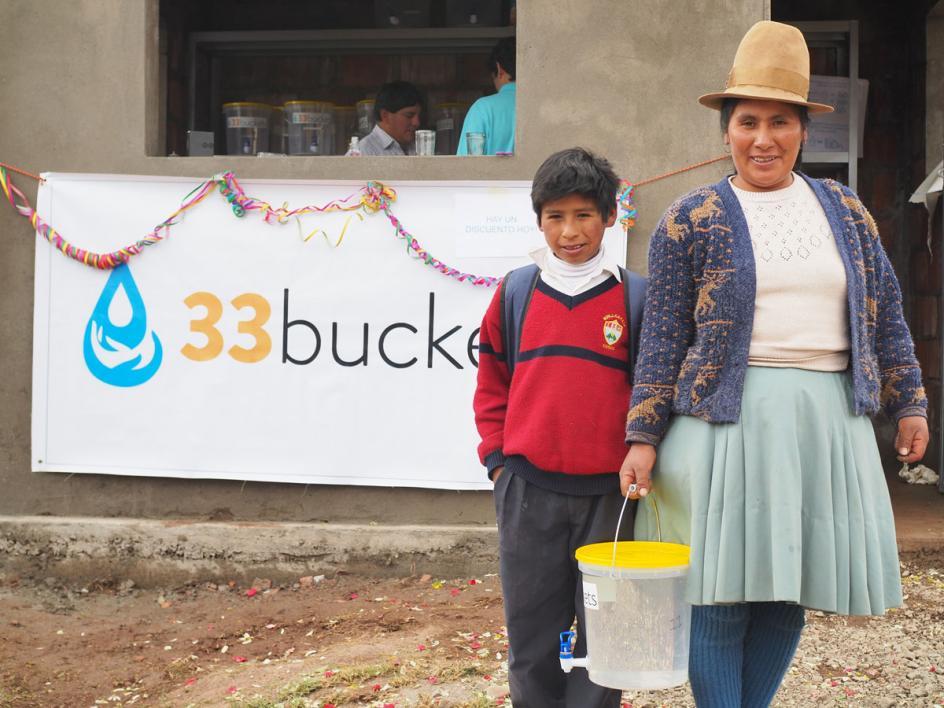 Community involvement, Huerta said, is key, “especially at the early stage. If people are invested, they’re excited and realize the importance and want to dedicate their time.”

“He was so invested and confident in being able to make things work. He was a huge asset the entire time,” Huerta said. “In the Dominican Republic it was the same thing — incredible people with very interesting stories in how they came from so little and how much they value community development.”

In the Dominican, Anderson Jean and Altagracia Jean Dosil, who live near the provincial capital Monte Plata, stepped up to lead the effort.

The 33 Buckets team will stay in contact to make sure the program runs successfully. They’ll use a Google spreadsheet to see real-time water sales in Peru. And Jean and Jean Dosil will send weekly sales and maintenance reports.

In Bangladesh, meanwhile, local leaders are exploring ways to expand distribution. “We’re trying to help them finance it through water sales in the local community close to where the filter is set up,” Sridhar said.

The group also has received requests from organizations in developing nations around the world, but for now they want to focus on additional work in Peru, where they’ve established strong connections.

“Each country has its own unique circumstances, culture and connections in finding building materials and filter components, so there’s a learning curve to working in each country,” Huerta said.

He added that the group has identified two at-risk sites near Cusco, where “we plan to make assessment trips within the year and implement the projects next year.”

From push-button parking to hands-free autopilot, self-driving technology has arrived to the U.S. auto industry as developers push to deliver features that have previously been the stuff of science fiction.Despite a recent fatal crash, carmaker Tesla this week reiterated a commitment to advancing autonomous vehicle technology, and the nation's top road safety regulator said such innovation remains...

Pitching in for humanity

Building businesses to heal the world 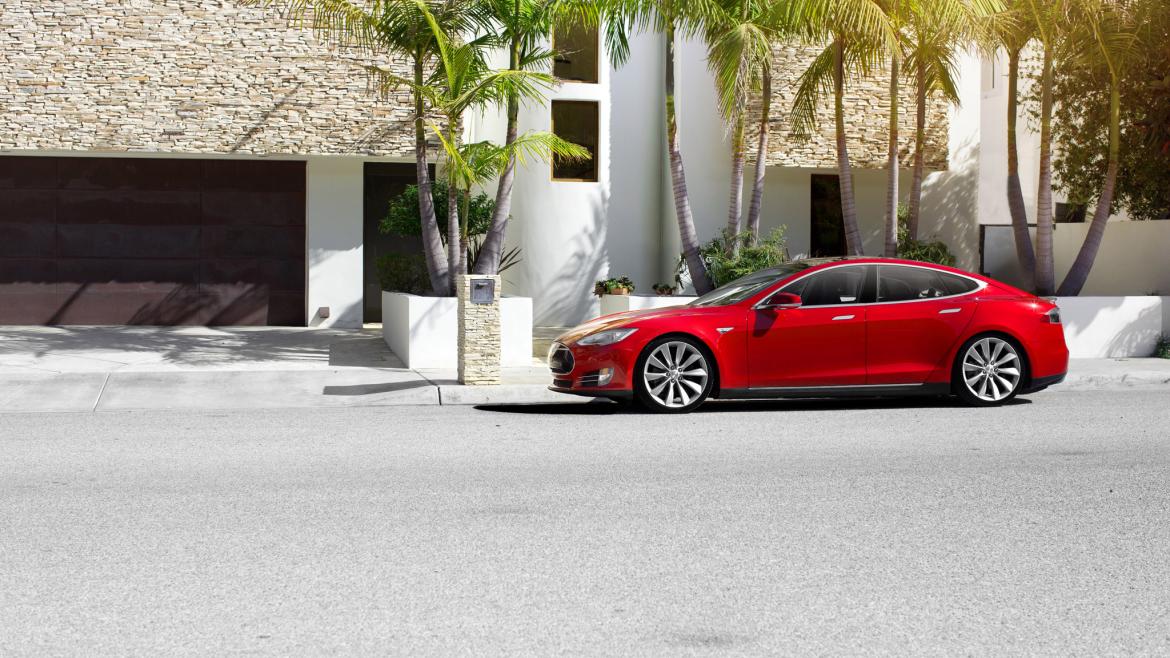 From push-button parking to hands-free autopilot, self-driving technology has arrived to the U.S. auto industry as developers push to deliver features that have previously been the stuff of science fiction.

Despite a recent fatal crash, carmaker Tesla this week reiterated a commitment to advancing autonomous vehicle technology, and the nation's top road safety regulator said such innovation remains a priority because of its potential to reduce accidents.

The developments raise several questions: Exactly how autonomous are self-driving cars? What remains to be done to improve safety? Is this technology roadworthy, or is there still a bit of work to do?

To find out, ASU Now turned to Ram Pendyala, an incoming professor at Arizona State University who teaches and conducts research in multimodal transportation systems planning and engineering. He has published nearly 80 articles in journals, books, and proceedings, completed more than $4 million in sponsored research, and holds leadership positions in professional associations such as the Transportation Research Board and American Society of Civil Engineers.

Pendyala's answers come as investigators look into a fatal crash in May involving a Tesla Model S and a tractor-trailer making a left turn. It was the first traffic death involving a self-driving car. Tesla officials have said the vehicle failed to tell the difference between the bright white truck and the sky and that neither the car's systems nor the driver applied the brakes. The tractor-trailer driver, meanwhile, told The Associated Press that the man killed had apparently had been watching a Harry Potter movie. The Tesla driver’s relatives have stated that they will cooperate with the investigation and that they hope it leads to safety improvements.

Tesla promotes the Model S as having autopilot, but it never claims the car is fully self-driving. The cars will auto-steer, self-park and even change lanes on their own in some cases. But the company characterizes the technology as an “assist feature,” something of an advanced cruise control, rather than an opportunity for drivers to check out for long stretches.

Q: How safe are these cars?

A: That’s a bit of a loaded question. There’s not a lot of cars on the market that boast of having autopilot capabilities. A lot of enhanced automotive features (already exist) like automated braking technology and the automatic parking technology, and cars that begin to sense if you’re getting drowsy and starting to drift, they self-correct. But in terms of real autopilot, there aren’t a lot of cars. In terms of being available to the mass market, there aren’t a lot of cars that have that feature. As Tesla states, the autopilot feature does permit you the ability to have arms off and legs off, and it will even change lanes, but that doesn’t mean the driver can be completely disengaged from the driving task. There is the expectation that the driver will be focused on the driving task. They have to be ready to take control at any moment. In this case, the autopilot capabilities aren’t foolproof.

Q: What can be done to improve safety?

A: There are probably some scenarios out there that have not undergone sufficient tests, yet. Before (fully autonomous vehicle) technology comes mainstream, there will be billions of miles of additional testing and thousands of scenarios that have not been covered so to speak. I would say drivers need to be focused on this task. … A semi-autonomous vehicle is exactly that; the driver has to remain engaged.

Q: Are people expecting too much of the technology?

A: If you look at a lot of the research we do at ASU, it’s about driver behavior. Let’s say this driver used this feature 100 times, and on a 100 trips it worked beautifully. The driver now has a certain expectation. You’re thinking the 101st time it’s going to be just as perfect. There now is a driver expectancy and driver behavior aspect to take into consideration. … Human driver behavior as it is, expectations begin to grow as you become familiar with the technology.

Q: There are other issues beside the automotive technology. Infrastructure needs to catch up as well, doesn’t it?

A: It’s not just an automotive technology issue. It’s as much an infrastructure issue. A lot of the research at ASU involves thinking about what we need to be doing on the infrastructure side. … Indeed, a lot of these automated self-driving vehicles need well-delineated lanes in order to sense the position of the vehicle.

Q: Where is the technology headed?

A: There are two types of technology: connected vehicle technology where they talk to each other through dedicated short range communications. Those are not automated vehicles. They are human-driven vehicles with a view towards assisting the driver and the vehicle to act and react in a safe manner.

The autonomous vehicles are meant to be standalone cars that can drive themselves in any type of environment without a worry. They sense everything happening around them and navigate the path.

A lot of this is beginning to emerge as CAVs — connected and automated vehicles. They are both autonomous as well as connected. On the one hand you have the autonomy, so the human is taken out of the equation. On the other hand, all of these vehicles are connected so they act in a more responsive manner ... You have to harness the power of both.