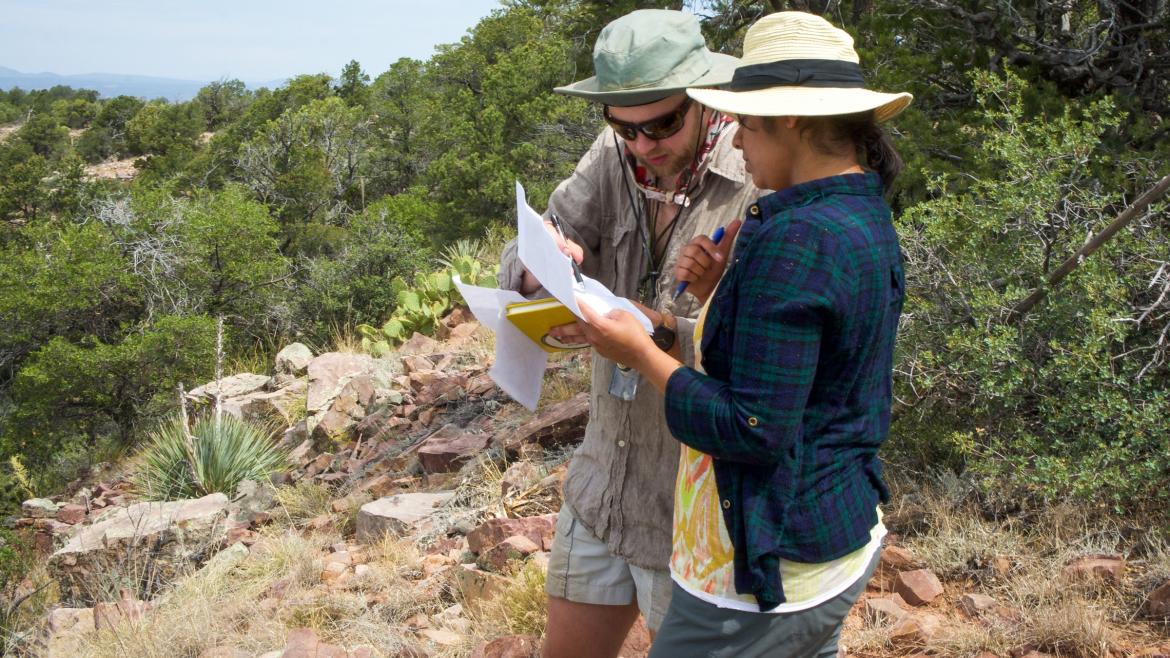 Tracking down the Arizona fireball

ASU-tribal partnership leads to meteorite find in Arizona wilderness.
Team made up of 1 prof, 2 students and 3 citizen scientists finds 15 meteorites.
ASU to curate meteorites, which will belong to White Mountain Apache Tribe.
June 28, 2016

Update: Nearly a year after it fell to Earth, the meteorite has an official name — one that ties it to the community where it was found. Read about it here.

On June 2, a chunk of rock the size of a Volkswagen Beetle hurtled into the atmosphere over the desert Southwest at 40,000 miles per hour and broke apart over the White Mountains of eastern Arizona.

A week later, one of Arizona State University’s top meteorite experts was off on a team expedition in the Arizona wilderness on an Apache homeland, braving bug bites, bears and mountainous terrain.

After three nights and 132 hours of searching, they were successful.

“This is a really big deal,” said Laurence Garvie, research professor and curator of the Center for Meteorite Studies in the School of Earth and Space Exploration at ASU. “It was a once-in-a-generation experience.”

It began when Garvie woke up on June 2, checked social media and saw that dozens of people and cameras witnessed a dramatic meteor fall in the wee hours of the morning. He immediately knew it was going to be a long day.

“This thing exploded in the atmosphere,” Garvie said. “When the stone breaks up, things just start dropping. ... By simple physics we can estimate where these things are on the ground.” 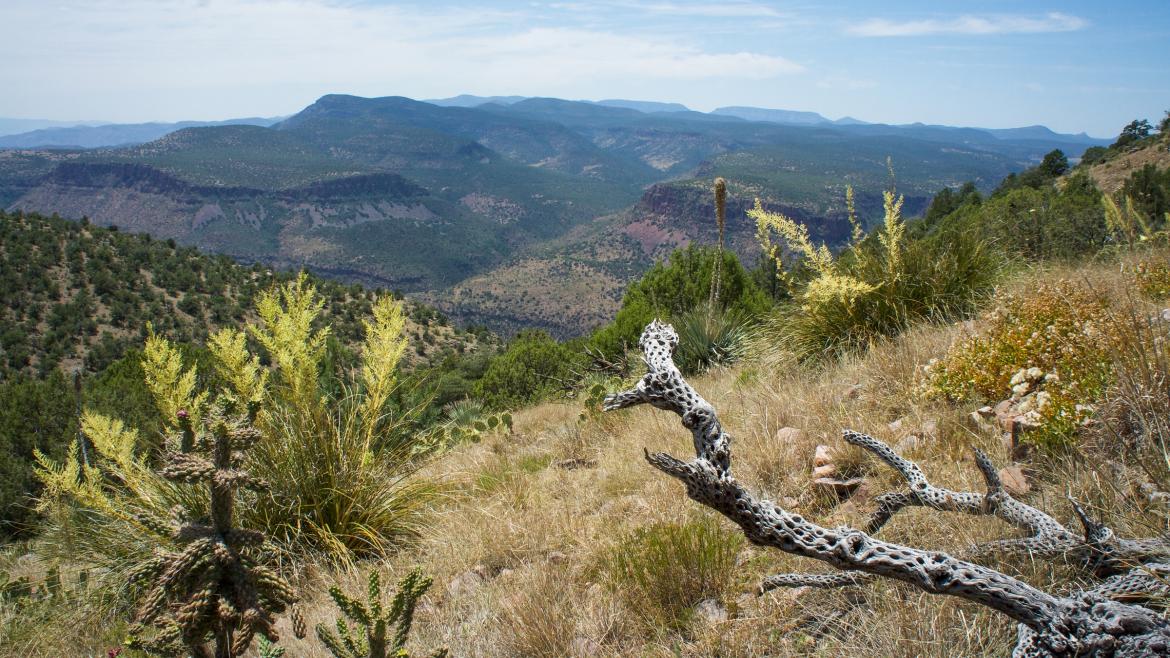 The ASU team was granted permission
by the White Mountain Apache Tribe to
go onto their land to search for the
meteorites.

A lot of meteorite hunters immediately knew where it had fallen, but tribal lands are closed to the public, unless hiking or fishing with a permit. “People were excited, but it wasn’t on public land,” Garvie said.

A day or so after the fall, after Garvie had stopped being bombarded for interview requests from the press, he and Jacob Moore, assistant vice president of tribal relations at ASU, contacted the tribal council of the White Mountain Apache Tribe.

“(Moore) was absolutely pivotal to this,” Garvie said.

With tribal permission granted, the Arizona State University–White Mountain Apache Tribe Meteorite Expedition, as Garvie dubbed it, took off for the mountains. Tribal chief ranger Chadwick Amos and Game and Fish director Josh Parker met the team nearby to help them with their search.

Garvie, two grad students from the Center for Meteorite Studies and three professional meteorite hunters invited by the center took off in three high-clearance four-wheel-drive trucks. They brought food and water for a week in case they got stuck.

Like most backcountry roads in Arizona, it was a hairy two-track.

“We drove 5 miles an hour,” Garvie said. They blew a tire (their last spare) at one point. “We drove a mile an hour after that,” he added. “We took 1.5 hours to travel the 7-mile dirt road to our first campsite.”

Everyone was bitten by either cactus or insects. Bears wandered through camp one night. On the way out, they rescued two lost hikers. Because the mountains are tinder dry, they couldn’t have campfires, so they ate canned chili, nuts and jerky. One guy put Reddi-Wip on everything. “It was a real adventure,” Garvie said.

The terrain is beautiful, but rugged. You might want to hike to a point 1,000 yards away, but it involves traversing twice that to get there.

After three nights camping and 132 hours of searching, the team found 15 meteorites, ranging in size from a medium-sized strawberry to a pea. “These are pristine things that were in space a few days ago,” Garvie said. 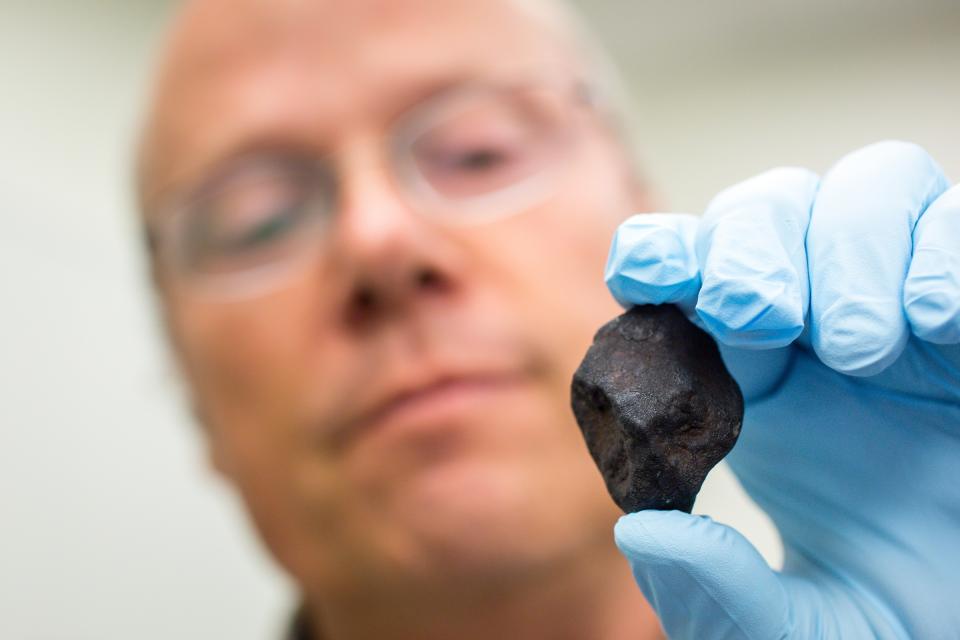 Laurence Garvie, curator of ASU’s Center for Meteorite Studies, on Tuesday displays the meteorite he found on his recent trek into the White Mountain Apache tribal area. His team found 15 meteorites from the June 2 fireball that broke up over Arizona. Photo by Charlie Leight/ASU Now

Searching consisted of walking slowly and scanning small patches of bare ground where it would be possible to see a small, black, rounded rock, according to Garvie.

Graduate students from the Center for Meteorite Studies, Prajkta Mane and Daniel Dunlap, both found meteorites.

Dunlap found one the size of a pea in a clump of grass. “Oh man, I can’t believe this is happening,” Dunlap said he thought when he saw it. “Oh my God, is that one? It is!”

“It was an amazing feeling,” he said later.

“It was crazy,” she said. “You study these things in the lab, but to go into the field with experienced people and find one was really amazing.”

It was the third recovered meteorite fall this year in the United States. The other two were in Mount Blanco, Texas, and Osceola, Florida. All three finds were enhanced by Doppler radar. Without the Doppler data, the White Mountain finds would likely not have been recovered, Garvie said.

“Like all discoveries, something of this magnitude bridges the gap of earth science,” said Ronnie Lupe, chairman of the White Mountain Apache Tribe. “They say meteorites crashing down upon the Earth's surface is relatively common; however, to have them land on tribal lands is significant in discovery.”

The three citizen scientists — Robert Ward, Ruben Garcia and Mike Miller, all well-known to the center — discovered meteorites and handed them off to the collection. It was a condition of their joining the expedition, and they gladly accepted, attracted by the thrill of the hunt.

“I really want to stress how important they were,” Garvie said.

It was the second time Garvie has personally found a meteorite. He didn’t expect to find anything on the expedition. “I was hoping,” he said.

Finding a meteorite can be hard, but not impossible, Garvie said. “If you just went out to the western deserts of Arizona and looked really hard, you might find one every few days,” he said.

The meteorites the team found are ordinary chondrites. Chondrites are stony — non-metallic — meteorites that have not been modified from melting or differentiation of the parent body. It was only the fourth recorded fall in Arizona history.

“Every new meteorite adds a piece to the puzzle of where we came from,” Garvie said. “We need to stress how grateful we are to the White Mountain Apache Tribal Chairman Ronnie Lupe for giving us access. This area is normally totally off limits to non-tribal members.”

The meteorites will remain the property of the tribe; the ASU center will curate them. Moore said the university was honored to work cooperatively with the tribe on such a rare scientific discovery.

“They have extended tremendous cooperation in the work the ASU scientists are doing on the White Mountain Apache tribal lands,” said Moore.

Lupe thanked everyone involved for being mindful of tribal lands and their laws and ordinances.

Meenakshi Wadhwa, director of the Center for Meteorite Studies and a professor in the School of Earth and Space Exploration, said she was proud that the cooperation between everyone involved yielded such an amazing find.

“A fresh meteorite fall is always a fantastic opportunity to learn something new about the origin of our solar system and planets,” Wadhwa said. “I am really proud of the great teamwork between our ASU personnel, the meteorite collectors and members of the White Mountain Apache Tribe that made it possible to collect pieces of this meteorite for the benefit of science.”

<img src="http://www.thesundevils.com/common/controls/image_handler.aspx?thumb_pre... /><br /><br />The National Association of Collegiate Directors of Athletics (NACDA) and USG Corporation (NYSE: USG) have announced Arizona State University as the winner of the 2016 USG NACDA Sustainability Award. ASU was chosen from a pool of three finalists and received the award for its ...

The National Association of Collegiate Directors of Athletics (NACDA) and USG Corporation (NYSE: USG) have announced Arizona State University as the winner of the 2016 USG NACDA Sustainability Award. ASU was chosen from a pool of three finalists and received the award for its work on Sun Devil Stadium and the Weatherup Center.