Giant blobs of rock, deep inside the Earth, hold important clues about our planet

Two massive blob-like structures lie deep within the Earth, roughly on opposite sides of the planet. The two structures, each the size of a continent and 100 times taller than Mount Everest, sit on the core, 1,800 miles deep, and about halfway to the center of the Earth.

Arizona State University scientists Edward Garnero, Allen McNamara and Sang-Heon (Dan) Shim, of the School of Earth and Space Exploration, suggest these blobs are made of something different from the rest of Earth’s mantle. The scientists’ work appears in the June issue of Nature Geoscience. 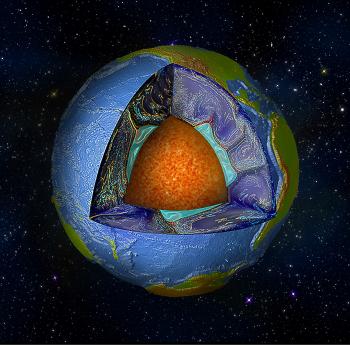 Cutaway of the Earth’s surface, down to the liquid core. A numerical convection experiment shows blobs in green, surrounding mantle rock in blue, and former oceanic crust from the surface that has subducted into the interior in yellow. Image courtesy of Dr. Mingming Li/University of Colorado Download Full Image

“While the origin and composition of the blobs are yet unknown,” said Garnero, “we suspect they hold important clues as to how the Earth was formed and how it works today.”

The blobs, he says, may also help explain the plumbing that leads to some massive volcanic eruptions, as well as the mechanism of plate tectonics from the convection, or stirring, of the mantle. This is the geo-force that drives earthquakes.

Earth is layered like an onion, with a thin outer crust, a thick viscous mantle, a fluid outer core and a solid inner core. The two blobs sit in the mantle on top of Earth’s core, under the Pacific Ocean on one side and beneath Africa and the Atlantic Ocean on the other.

Waves from earthquakes passing through Earth’s deep interior have revealed that these blobs are regions where seismic waves travel slowly. The mantle materials that surround these regions are thought to be composed of cooler rocks, associated with the downward movement of tectonic plates.

The blobs, also called thermochemical piles, have long been depicted as warmer-than-average mantle materials, pushed upward by a slow churning of hot mantle rock. The new paper argues they are also chemically different from the surrounding mantle rock, and may partly contain material pushed down by plate tectonics. They might even be material left over from Earth’s formation, 4.5 billion years ago.

Much is yet to be learned about these blobs. But the emerging view from seismic and geodynamic information is that they appear denser than the surrounding mantle materials, are dynamically stable and long-lived, and have been shaped by the mantle’s large-scale flow. The scientists expect that further work on the two deep-seated anomalies will help clarify the picture and tell of their origin.

“If a neuroscientist found an unknown structure in the human brain, the whole community of brain scientists, from psychologists to surgeons, would actively pursue understanding its role in the function of the whole system,” Garnero said.

“As the thermochemical piles come into sharper focus, we hope other Earth scientists will explore how these features fit into the big puzzle of planet Earth.”

DNA may be the blueprint of life, but it’s also a molecule made from just a few simple chemical building blocks. Among its properties is the ability to conduct an electrical charge, fueling an engineering race to develop novel, low-cost nanoelectronic devices.Now, a team led by ASU Biodesign Institute researcher Nongjian "N.J." Tao and Duke theorist David Beratan has been able to understand and ...

DNA may be the blueprint of life, but it’s also a molecule made from just a few simple chemical building blocks. Among its properties is the ability to conduct an electrical charge, fueling an engineering race to develop novel, low-cost nanoelectronic devices.

Now, a team led by ASU Biodesign Institute researcher Nongjian "N.J." Tao and Duke theorist David Beratan has been able to understand and manipulate DNA to more finely tune the flow of electricity through it. The key findings, which can make DNA behave in different ways — cajoling electrons to smoothly flow like electricity through a metal wire, or hopping electrons about like the semiconductors materials that power our computers and cellphones — pave the way for an exciting new avenue of research advancements. Over short distances, electrons flow across DNA and spread fast like waves across a pond. Across longer distances, they behave more like particles and hopping takes effect. “Think of trying to get across a river,” explained Limin Xiang, a postdoctoral researcher in Biodesign Institute researcher Nongjian Tao’s lab. “You can either walk across quickly on a bridge or try to hop from one rock to another.” Download Full Image

The results, published in the online edition of Nature Chemistry, may provide a framework for engineering more stable and efficient DNA nanowires, and for understanding how DNA conductivity might be used to identify gene damage.

Building on a series of recent works, the team has been able to better understand the physical forces behind DNA’s affinity for electrons.

“We’ve been able to show theoretically and experimentally that we can make DNA tunable by changing the sequence of the ‘A, T, C, or G’ chemical bases, by varying its length, by stacking them in different ways and directions, or by bathing it in different watery environments,” said Tao, who directs the Biodesign Center for Biolectronics and Biosensors and is a professor in the Ira A. Fulton Schools of Engineering.

Every molecule or substance has its own unique attraction for electrons — the negatively charged particles that dance around every atom. Some molecules are selfish and hold onto or gain electrons at all costs, while others are far more generous, donating them more freely to others in need.

But in the chemistry of life, it takes two to tango. For every electron donor there is an acceptor. These different electron dance partners drive so-called redox reactions, providing energy for the majority of the basic chemical processes in our bodies.

For example, when we eat food, a single sugar molecule gets broken down to generate 24 electrons that go on to fuel our bodies. Every DNA molecule contains energy, known as a redox potential, measured in tenths of electron volts. This electrical potential is similarly generated in the outer membrane of every nerve cell, where neurotransmitters trigger electronic communication between the 100 trillion neurons that form our thoughts.

But here’s where the ability of DNA to conduct an electrical charge gets complicated. And it’s all because of the special properties of electrons — where they can behave like waves or particles due to the inherent weirdness of quantum mechanics.

Scientists have long disagreed over exactly how electrons travel along strands of DNA, said David N. Beratan, professor of chemistry at Duke University and leader of the Duke team.

“Think of trying to get across a river,” explained Limin Xiang, a postdoctoral researcher in Tao’s lab. “You can either walk across quickly on a bridge or try to hop from one rock to another. The electrons in DNA behave in similar ways as trying to get across the river, depending on the chemical information contained within the DNA.” 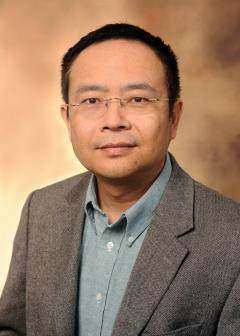 Previous findings by Tao (pictured left) showed that over short distances, the electrons flow across DNA by quantum tunneling that spread fast like waves across a pond. Across longer distances, they behave more like particles and the hopping takes effect.

This result was intriguing, said Duke graduate student and co-lead author Chaoren Liu, because electrons that travel in waves are essentially entering the “fast lane,” moving with more organization and efficiency than those that hop.

Flick of the switch

DNA strands are built like chains, with each link comprising one of four molecular bases whose sequence codes the genetic instructions for our cells. Like metal chains, DNA strands can easily change shape, bending, curling and wiggling around as they collide with other molecules around them.

All of this bending and wiggling can disrupt the ability of the electrons to travel like waves. Previously, it was believed that the electrons could only be shared over at most three bases.

The team theorizes that creating these blocks of G bases causes them to all “lock” together so the wave-like behavior of the electrons is less likely to be disrupted by the random motions of the DNA strand.

“We can think of the bases being effectively linked together so they all move as one. This helps the electron be shared within the blocks,” Liu said.

Next, the Tao group carried out conductivity experiments on short, six to 16 base strands of DNA, carrying alternating blocks of three to eight guanine bases. By tethering their test DNA between a pair of two gold electrodes, the team could flip on and control a small current to measure the amount of electrical charge flowing through the molecule.

They found that by varying a simple repeating “CxGx” pattern of DNA letters (x is the odd- or even-numbered G or C letters), there was an odd-even pattern in the ability of DNA to transport electrons. With an odd number, there was less resistance, and the electrons flowed faster and more freely (more wave-like) to blaze a path across the DNA.

The experimental work confirmed the predictions of the theory.

In addition to practical DNA-based electronic applications (for which the group has filed several patents), one of the more intriguing aspects is relating their work — done with short simple stretches of DNA — back to the complex biology of DNA thriving inside of every cell.

Of upmost importance to survival is maintaining the fidelity of DNA to pass along an exact copy of the DNA sequence every time a cell divides. Despite many redundant protection mechanisms in the cell, sometimes things go awry, causing disease. For example, absorbing too much UV light can mutate DNA and trigger skin cancer.

One of the DNA chemical letters, “G,” is the most susceptible to oxidative damage by losing an electron (think of rusting iron — a result of a similar oxidation process). Xiang points out that long stretches of Gs are also found on the ends of every chromosome, maintained by a special enzyme known as telomerase. Shortening of these G stretches has been associated with aging.

But for now, the research team has solved the riddle of how the DNA information influences the electrical charge.

“This theoretical framework shows us that the exact sequence of the DNA helps dictate whether electrons might travel like particles, and when they might travel like waves,” Beratan said. “You could say we are engineering the wave-like personality of the electron.”

The research was funded by a multimillion-dollar, multi-institute project under the support of the Department of Defense’s Multidisciplinary University Research Initiative (MURI) program, aimed at aiding high-priority basic science that could lead to innovative advancements.